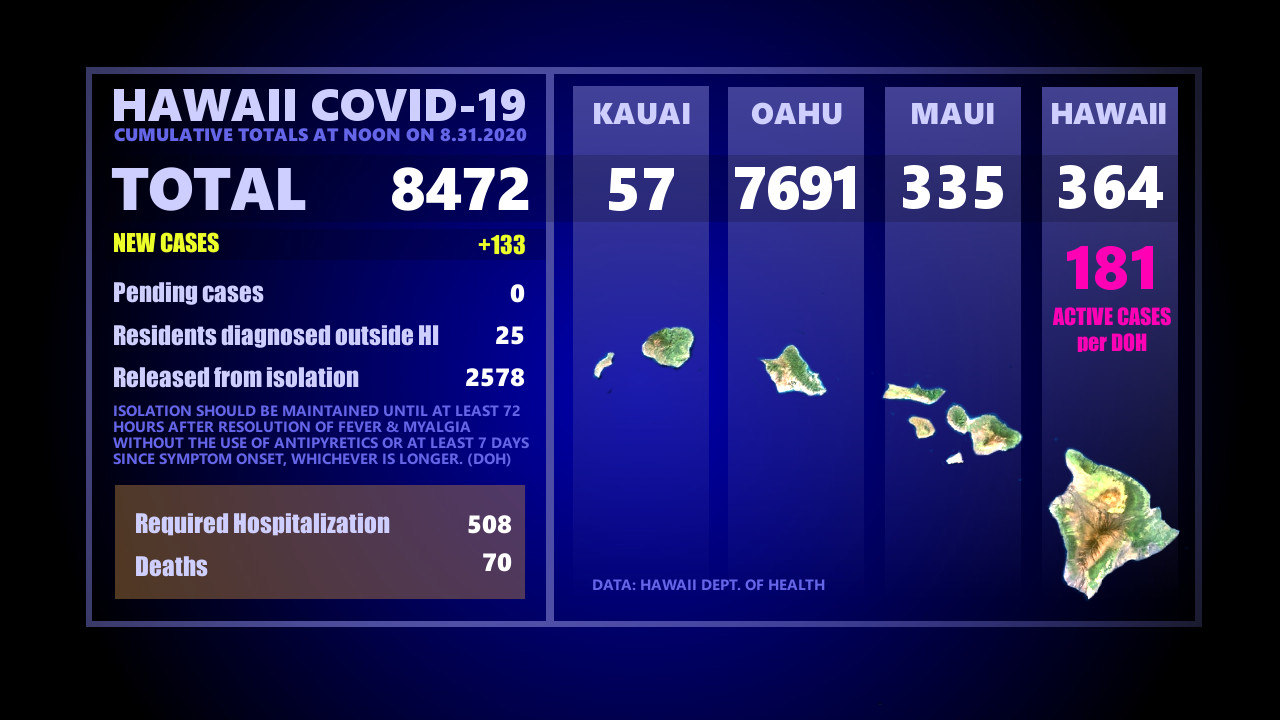 HAWAIʻI - Today was the highest reported death toll in a single day since the coronavirus pandemic began, state officials announced at noon.

(BIVN) – Seven (7) individuals with COVID-19 were reported dead in a noon update posted by the Hawaiʻi health department on Monday, the highest single-day death toll in Hawaiʻi since the pandemic began. There has been a total of 70 deaths in Hawaiʻi related to COVID-19 infection.

The State reported two (2) of those deaths occurred on Hawaiʻi island. They are presumably the two that are linked to the outbreak at the Yukio Okutsu State Veterans Home in Hilo.

UPDATE – (3 p.m.) – Hilo Medical Center reported on Monday that there are sixteen (16) total COVID-positive patients are hospitalized: 2 in the ICU, and 14 in the COVID Unit. Also, all patients and staff on the Behavioral Health Unit who were tested are COVID-19 negative after an employee tested positive last week.

There was also an additional death reported in connection with the outbreak at Yukio Okutsu State Veteran Home in Hilo, bringing the total number of deaths associated with the cluster to three (3).

There was a lower number of newly reported cases (133) statewide compared to previous days in the month of August. The State has not yet commented on whether this is a result of a testing issue or if the number of new cases is decreasing.

There were twenty-four (24) newly reported cases on Hawaiʻi island. 183 of the 364 total cases on the Big Island have been released from isolation, which means 181 cases are active.

There was also one (1) new case on Maui and the rest where identified on Oʻahu.

UPDATE – (4:30 p.m.) – The Hawaiʻi Department of Health said on Monday that the percentage of positive cases remains level, but high, with more deaths reported and widespread community infections. DOH stated:

Seven (7) additional deaths from COVID-19 are reported today; five (45) on O‘ahu and two (2) on Hawai‘i island. On O‘ahu, four (4) men, with underlying health conditions, were hospitalized before passing away. Two (2) were older than 80, another was in the 70 to 79-year-old age group, and the third in the 60 to 69-year old group. A woman on O‘ahu, with underlying conditions was in the 60 to 69-year-old age group and was also hospitalized when she passed away. On Hawai‘i island two (2) men, both residents of the State Veteran’s Home, and both older than 80 passed away.

Governor David Ige will be holding a news conference from State Capitol today at 2:30 p.m.

Gov. David Ige has announced that the Federal Emergency Management Agency (FEMA), has approved the State’s application to participate in the unemployment insurance plus up program, called the Lost Wages Assistance Program. On Friday, Gov. Ige said, “We pursued the additional funds because we know the added $300 per week will help many in our community who are struggling. I have directed the department to implement the program as quickly as possible while maintaining the program’s integrity.” Additional information on how to apply is expected to be announced shortly.