KONA, Hawaiʻi - The Leeward Planning Commission on Monday voted to defer taking action on the Special Permit application to legitimize a wedding venue in the Waiono Meadows area of Hōlualoa. 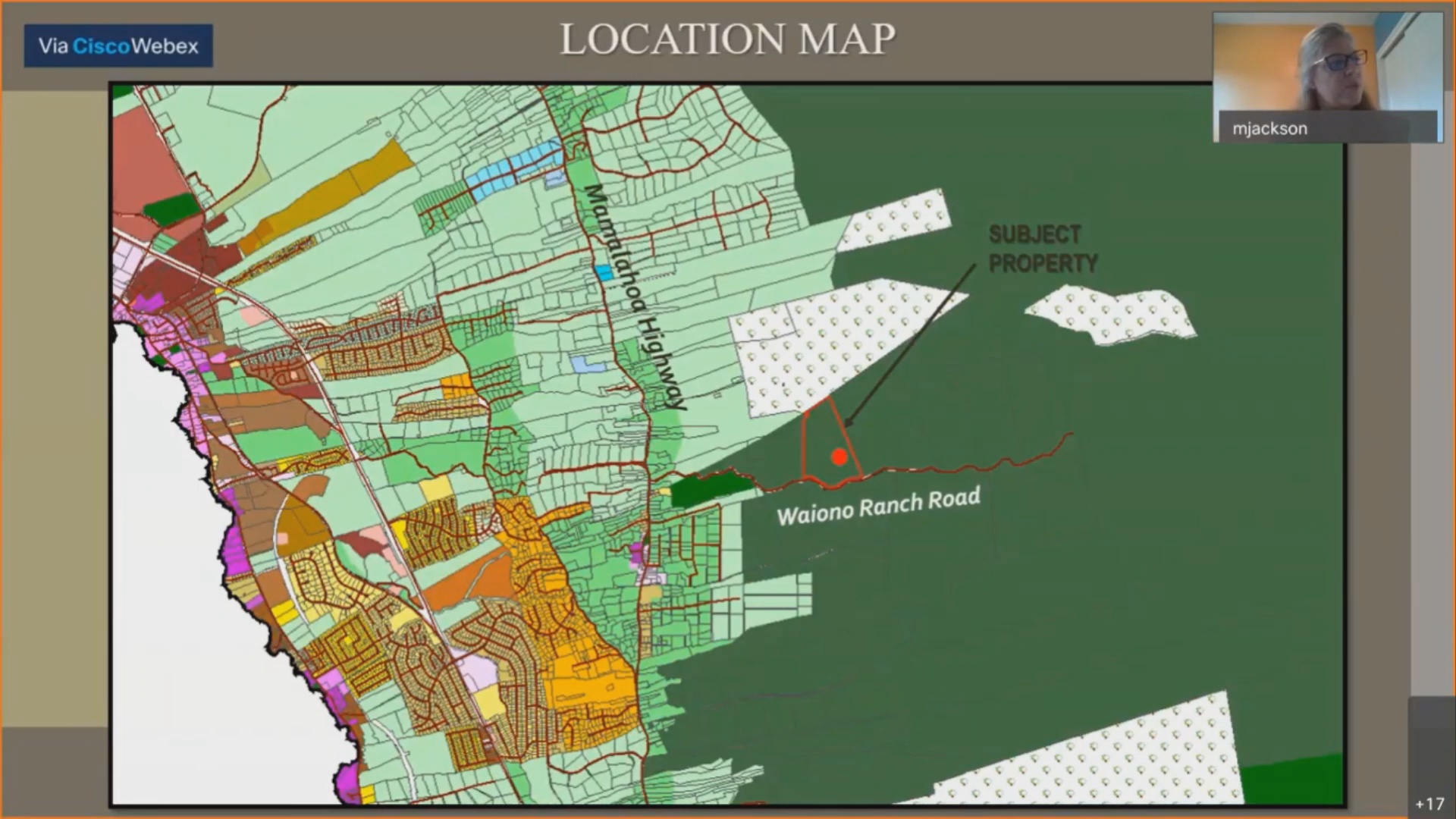 Image of the map taken from the livestream video of the planning meeting.

(BIVN) – The decision on a request for a Special Permit allowing a wedding venue to operate on a Hōlualoa coffee farm in Kona was deferred on Monday.

The Leeward Planning Commission did not approve or deny the application from Douglas and Kathryn Hickey seeking to legitimize the establishment of a venue for weddings and similar gatherings on a 2.25-acre portion of a 20-acre condominium property regime (CPR) unit of an 80-acre property situated in the State Land Use Agricultural District.

Prior to the commission meeting, the Hawaiʻi County Planning Department recommended that the application be denied. The department provided a 14-page proposed Findings of Fact and Conclusions of Law, and summarized its reasoning in a slide presentation. The agricultural zoning of the area is a primary concern. County planners stated:

The Planning Department also expressed concerns about the impacts wedding events would have on the surrounding community, saying:

Adverse affects on surrounding properties would include a substantial increase in traffic and in noise, especially with events occurring up to 10 p.m. daily.

Construction and operation of the event venue with a maximum of 250 to 900 visitors per week would substantially change the agricultural character of the land and its present use.

The use of the Waiono Ranch Road was also a point of concern. The Planning Department stated:

The private one-lane access road is substandard with narrow pavement width, unmaintained grass shoulders, blind curves and hills, areas where flooding occurs, and therefore cannot accommodate an increase in traffic. The access road does not meet the fire code for fire truck access due to steep grades over 15% in some sections and road pavement width of less than 20 feet. The intersection of the access road with the highway is also substandard and DPW recommended improvements be made.

“I came into this thinking it would be a challenge, but I didn’t think it would be this kind of a challenge,” said planning consultant and former planning commissioner Zendo Kern on behalf of the Hickey family. Kern said he was concerned about the apparent lack of fairness in the situation. “When you have a farmer here that actually operates a farm,” Kern began, “often times we see applications come in that have no farming activities.”

“Ms. Hickey’s been part of the farm bureau for over six years,” Kern said. “She chaired the farm bureau, as well as other charities in the area. I wonder how many of the surrounding areas actually do farming in Hawaiʻi County.”

Kern noted there were 32 letters of support of the Hickey application. Some of those supporters spoke during the online meeting.

“We are Hawaiʻi farmers,” testified an emotional Kathryn Hickey. “We do farm the vast majority of our property. We will continue to do that. We need your help, we need a lot of help. We need it from you. Please help us and approve our permit.”

There were also some voices who spoke in opposition to the application. They were mostly residents who share the use of the Waiono Ranch Road and expressed concern about the increased traffic impacts on the narrow, substandard roadway. 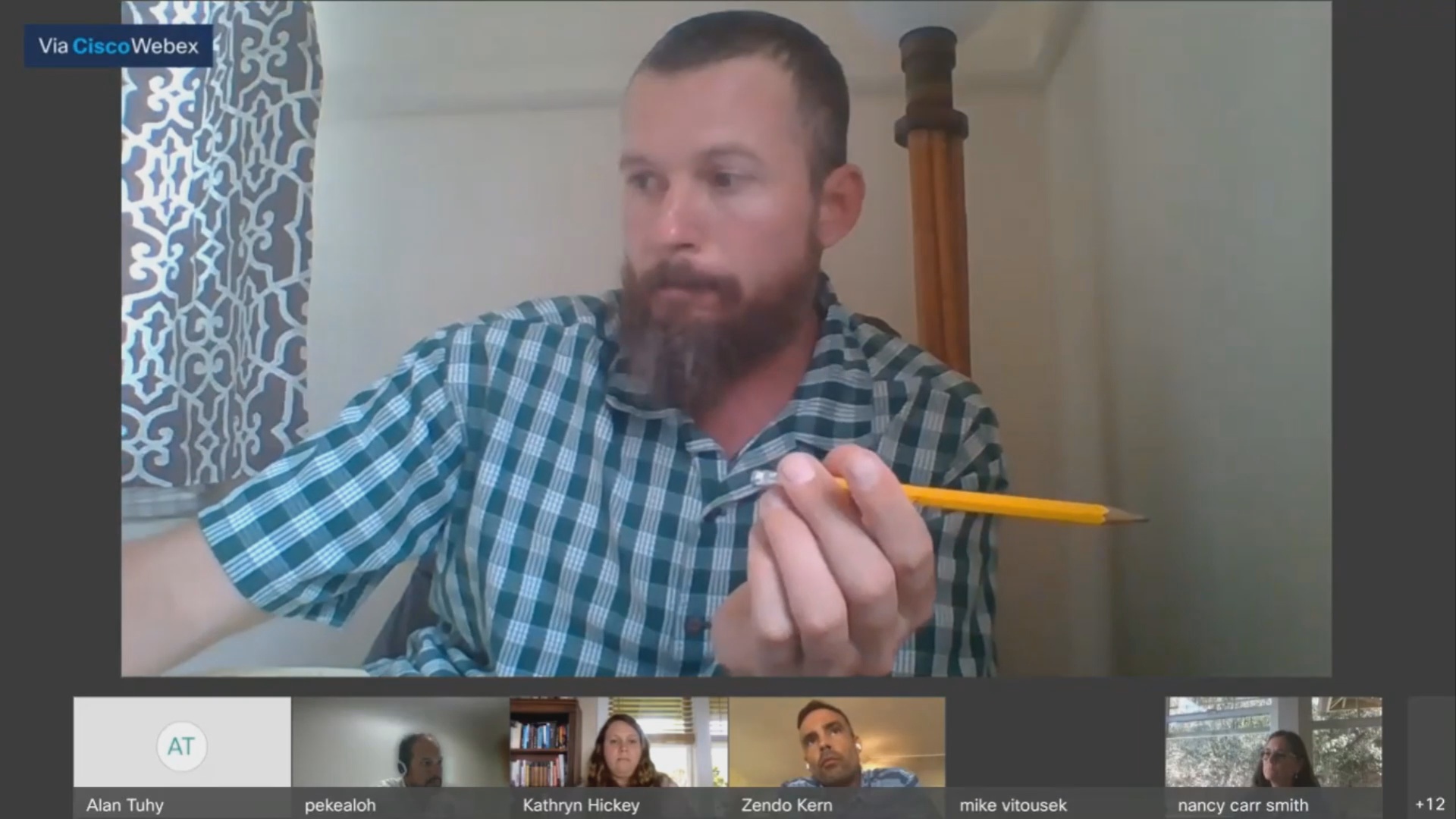 Commissioner Mike Vitousek empathized with the Hickey’s situation, as well as the challenges that Hawaiʻi farmers in general. “Nationwide its very difficult to make a living in farming,” Vitousek said, adding that in Hawaiʻi, “its even more difficult, because real estate prices are driven up by wealthy people coming in from the mainland and buying agricultural properties as kind of a retirement or a novelty at a value that far exceeds the agricultural revenue of those properties.”

“We can’t change the perception of value,” said Vitousek. “Property is always going to be expensive. But we can understand that farmers will need to supplement their income. Having venues like this that are reflective of the agricultural character of our island is important.”

Vitousek said the application “is a good concept put forward by good people. But the action is problematic. Until a traffic impact analysis can tell me that I’m wrong, I believe its a matter of when and not if there’s a bad accident that would be associated with intoxicated wedding guests coming down that road late at night.”

“I hope that the Hickeys will be able to use that same ability that they have in putting together this entire group of people who came out to support them, to work within their own neighborhood to reach a consensus on how you can move forward in agreement with your neighbors,” Vitousek said. The commission vote to defer the matter.