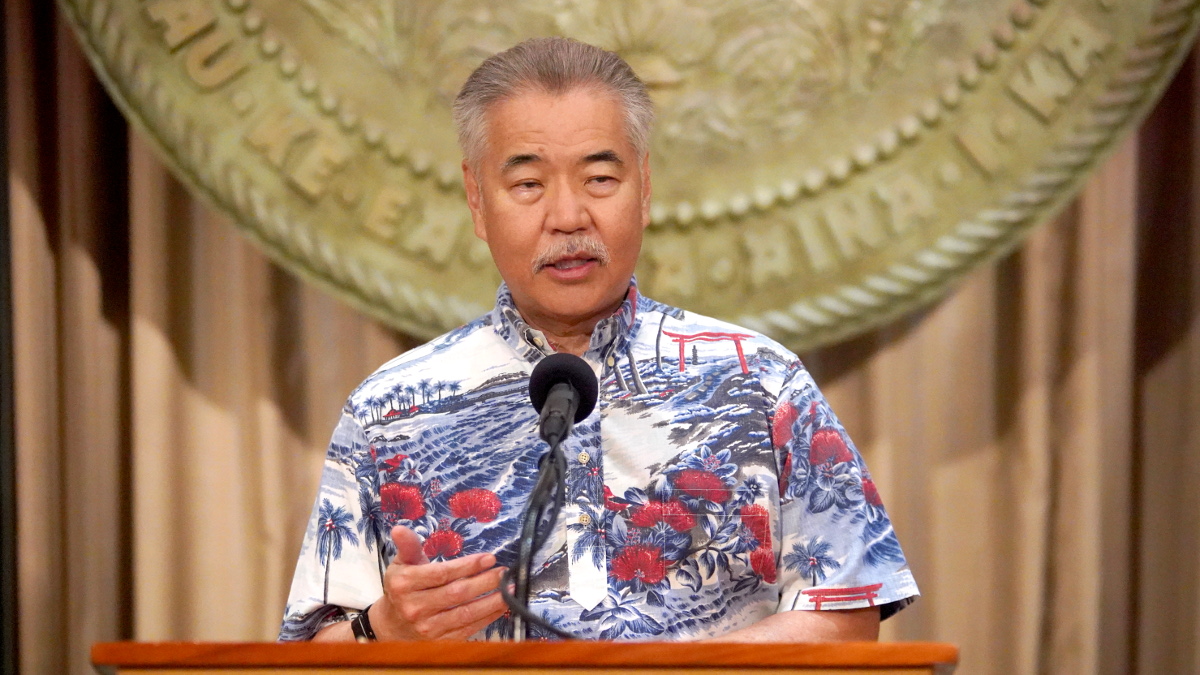 photo of Governor David Ige from a Tuesday news conference, courtesy the State of Hawaiʻi

HAWAIʻI - Out of state arrivals to Hawaiʻi island seeking to bypass the mandatory 14-day self-quarantine by using a pre-travel test will be required to take a second COVID-19 test upon arrival to the Big Island.

Video by Governor David Ige on Facebook, livestreamed on October 13, 2020.

(BIVN) – Its official: Hawaiʻi County will require a second COVID-19 test for out-of-state visitors who are taking part in the pre-travel testing program that begins on October 15.

Governor David Ige announced on Tuesday that he has officially approved Hawaiʻi County Mayor Harry Kim’s request to administer the secondary antigen test. The Big Island will not be taking part in an inter-island travel program, however.

Starting on Thursday, the State’s pre-travel testing program will allow visitors to bypass the mandatory 14-day self-quarantine period as long as they test negative using a certified Nucleic Acid Amplification Test within 72 hours from the final leg of departure. Hawaiʻi County, however, wanted to test visitors a second time upon their arrival. Mayor Kim’s concerns led to news reports that he was considering opting-out of the pre-travel testing program altogether.

“This second test upon arrival to Hawai’i island will provide an extra layer of protection for our community,” Mayor Harry Kim said. “Virtually, all medical and Coronavirus experts agree for the necessity of more than one test.”

Mayor Kim has amended his COVID-19 Emergency Rule No. 12 in order to allow for the new visitor arrival test.

The County of Hawaiʻi provided these details in an afternoon media release:

The cost of the rapid COVID-19 arrival test will be borne by Hawai‘i County via federal CARES Act funding. Testing will be managed by Hawai‘i County Civil Defense Agency staff and administered by Premier Medical Group Hawai’i. This antigen test will provide results within 15-20 minutes. If a traveler tests negative for COVID-19, they will not be subject to self-quarantine. Those testing positive for COVID-19 will be required to take a subsequent PCR test immediately and will be required to self-quarantine per State Department of Health rules while awaiting those results of this test, which are expected within 36 hours.

Meanwhile, the 14-day self-quarantine period for inter-island travel from O‘ahu and between the neighbor islands will remain in place.

Although the mayors of Kauaʻi and Maui County worked out an agreement with Governor Ige that will allow for a bypass of the inter-island quarantine through pre-testing, Hawaiʻi County has not.

The County of Hawaiʻi said today that the inter-island quarantine will remain in place until Governor Ige modifies Emergency Proclamation #13.

“In working with Mayor Kim, he is focused on the trans-Pacific pre-travel program,” Governor David Ige said during today’s news conference. “We have talked about different scenarios for inter-County travel. We are working to arrive at something that would be workable.”

“As you know, over the last week or two, there has been an increased number of cases on Hawaiʻi island, which I know the mayor is concerned with,” the governor said.

According to the governor, the Big Island has “an increase in utilization of ICU beds, and acute care beds”.

“I believe the ICU beds are 88% utilized in Hawaiʻi County, and that’s a big concern of the mayor,” Governor Ige said.

The details of the pre-travel testing program were outlined in the 14th emergency proclamation signed by the governor today.