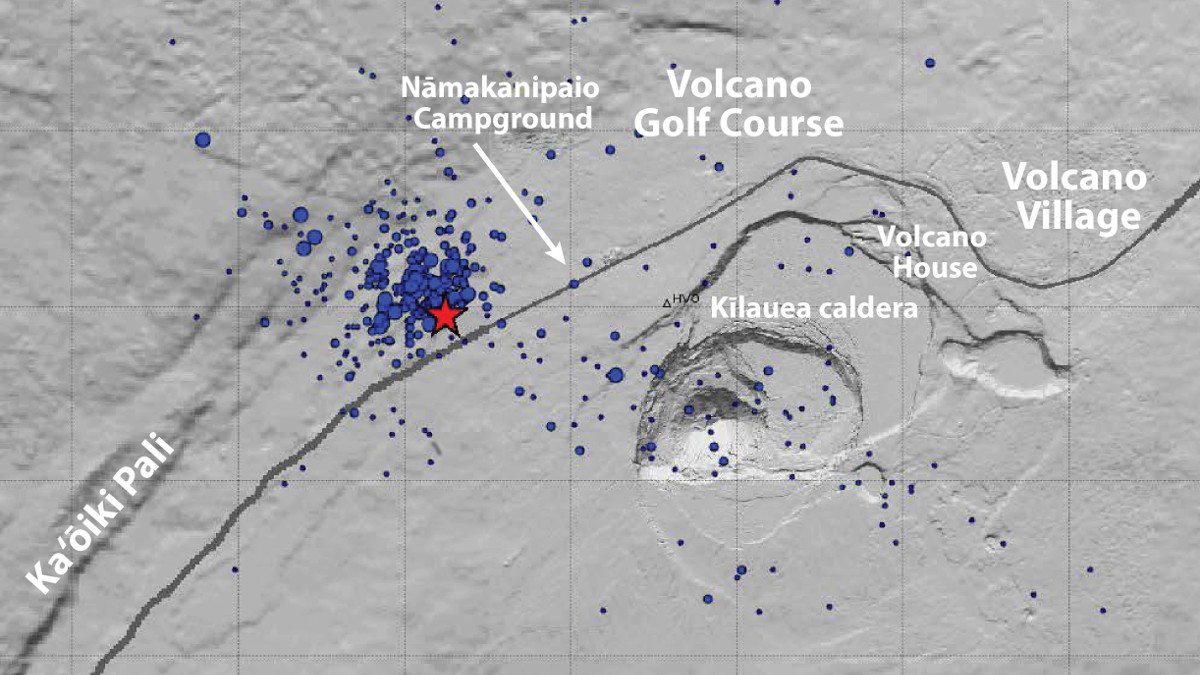 (BIVN) – Last week, a swarm of earthquakes near the summit of Kīlauea got the attention of Hawaiʻi residents and prompted an information statement from the USGS Hawaiian Volcano Observatory.

On the evening of Thursday, October 22nd, people living near the summit of Kīlauea Volcano began to feel a series of earthquakes. They were small, and some could even be mistaken for a strong gust of wind blowing against the house.

As the night went on, they became more frequent and larger in magnitude. Beds were shaken enough to wake people up, and household items were rattling. People were wondering, “Why are there so many earthquakes? How big will they get? Is an eruption coming?”

As it turns out, a shallow seismic swarm had begun west of Kīlauea Volcano’s summit, near Nāmakanipaio Campground. The largest single event was a magnitude-3.5 earthquake on Sunday morning at 5:08 a.m. local time. And an imminent eruption does not appear to be likely.

USGS Hawaiian Volcano Observatory (HVO) scientists were closely monitoring these earthquakes from the onset, and issued a Kīlauea Information Statement on Friday, October 23rd. The summary stated that “Kīlauea Volcano is not erupting. A small swarm of shallow seismicity over the past 24 hours has occurred near the Ka‘ōiki fault system, northwest of Kīlauea’s summit. Other Kīlauea monitoring data streams remain stable and show no signs of increased activity.”

Throughout this recent seismic swarm, no significant changes were observed in any of HVO’s other monitoring data streams.  This differs from the events leading up to Kīlauea’s 2018 eruption for example, when in addition to earthquakes, geodetic sensors measured dramatic changes in deformation due to the accumulation and migration of magma. 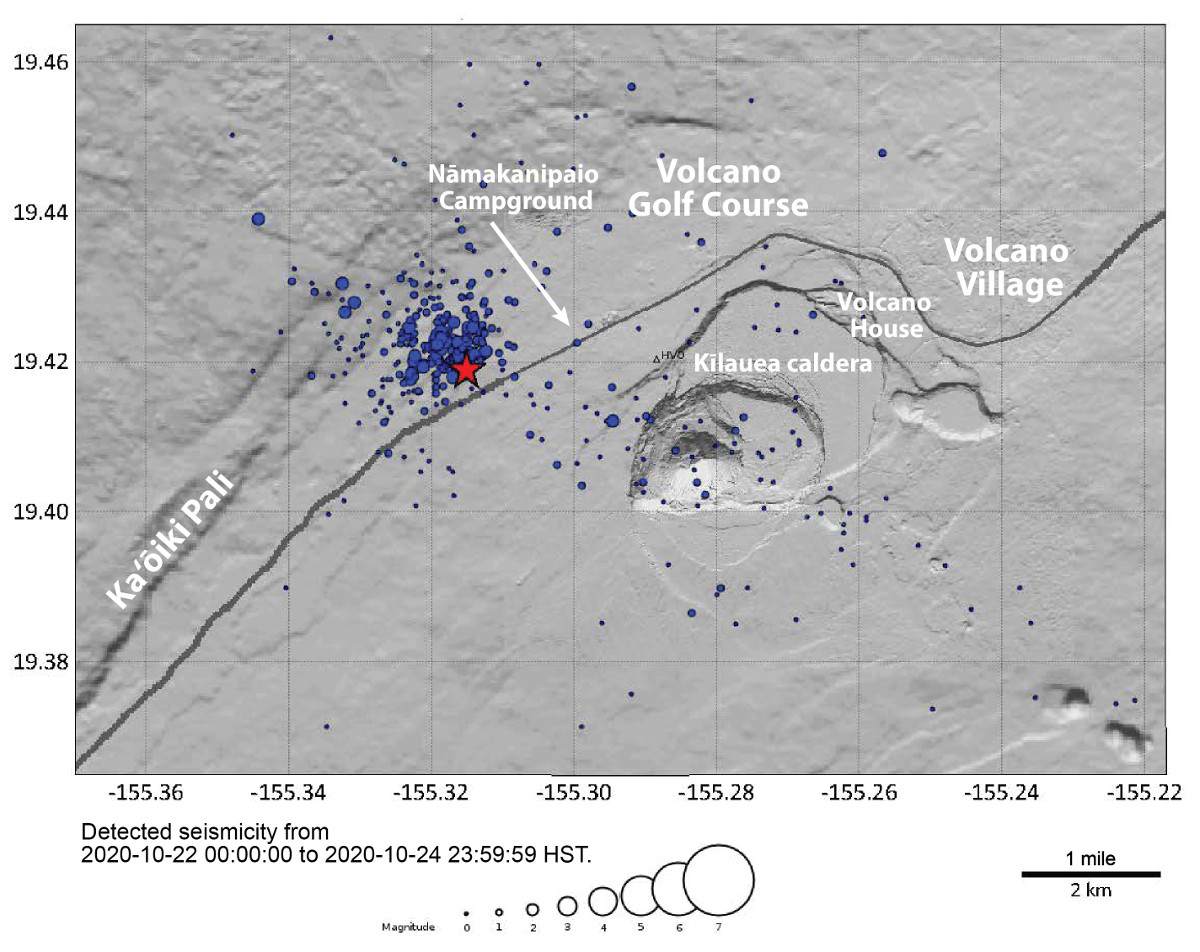 (USGS) Inset of map “showing earthquake epicenters (blue circles) from a shallow seismic swarm that began on October 23rd, 2020. Hundreds of earthquakes were recorded beneath the northeastern tip of the Ka‘ōiki fault system, about 1 mile (less than 2 km) west of Nāmakanipaio Campground. These earthquakes occurred in a cluster about 1 mi (2 km) wide and 1–3 mi (2–5 km) below the surface. The largest single event (red star) was a magnitude-3.5 earthquake on Saturday, October 24th, at 5:08 a.m. local time.” Full graphic below.

This seismic swarm continued in earnest through the weekend. Residents of the Volcano Golf Course neighborhood in particular had a few restless nights and reported weak shaking associated with some of the earthquakes on the USGS “Did You Feel It?” website. But activity gradually diminished, and the number of earthquakes is now back to near “background” levels.

Although Kīlauea and Mauna Loa are not currently erupting, they are both active volcanoes and there is constant “background” activity going on within these volcanoes. This background activity can lead to, and include, things like this recent earthquake swarm. The Ka‘ōiki fault system is located along the structural interface between these two active volcanoes.

HVO has detected several similar Ka‘ōiki seismic swarms since 1983. For more information on earthquakes in this area, please see the Volcano Watch article titled, “Why do swarms of earthquakes occur around the Ka‘ōiki Pali?” published by HVO scientists in 2012.

Earthquakes are part of life on an active volcano. A Volcano Watch article earlier this month described “The Great Hawaii ShakeOut” exercise that took place on October 15th. This Ka‘ōiki seismic swarm is yet another reminder for Hawaii residents to be prepared for earthquakes.

Coincidentally, Island of Hawai‘i residents also reported strong smells of sulfur or vog (volcanic air pollution) over the past week. HVO’s gas monitoring instruments have not recorded any increases in volcanic emissions of SO2 or H2S however. Why, then, have these smells been more noticeable?

The most likely reason is Kona winds. For the past week or so, Hawai’i has been experiencing winds coming from the south instead of typical trade winds from the northeast. Not only is the wind direction different, but some places that usually have a constant breeze are experiencing still air. As a result, even though volcanic gases emanating from Kīlauea have remained at consistent “background” levels, they are being blown around and concentrated in different places than normal.

Between seismic swarms leading to sleepless nights, and sulfur smells leading to wrinkled noses, it has been a somewhat interesting week for Island of Hawai‘i residents!

One thing remains the same—just like every week, HVO scientists are vigilantly monitoring volcanic activity. There is currently no eruption, or signs that an eruption is imminent. But the events of the past week serve to illustrate why HVO scientists constantly monitor and study the volcanoes we live on. Things can, and do, change at any time.