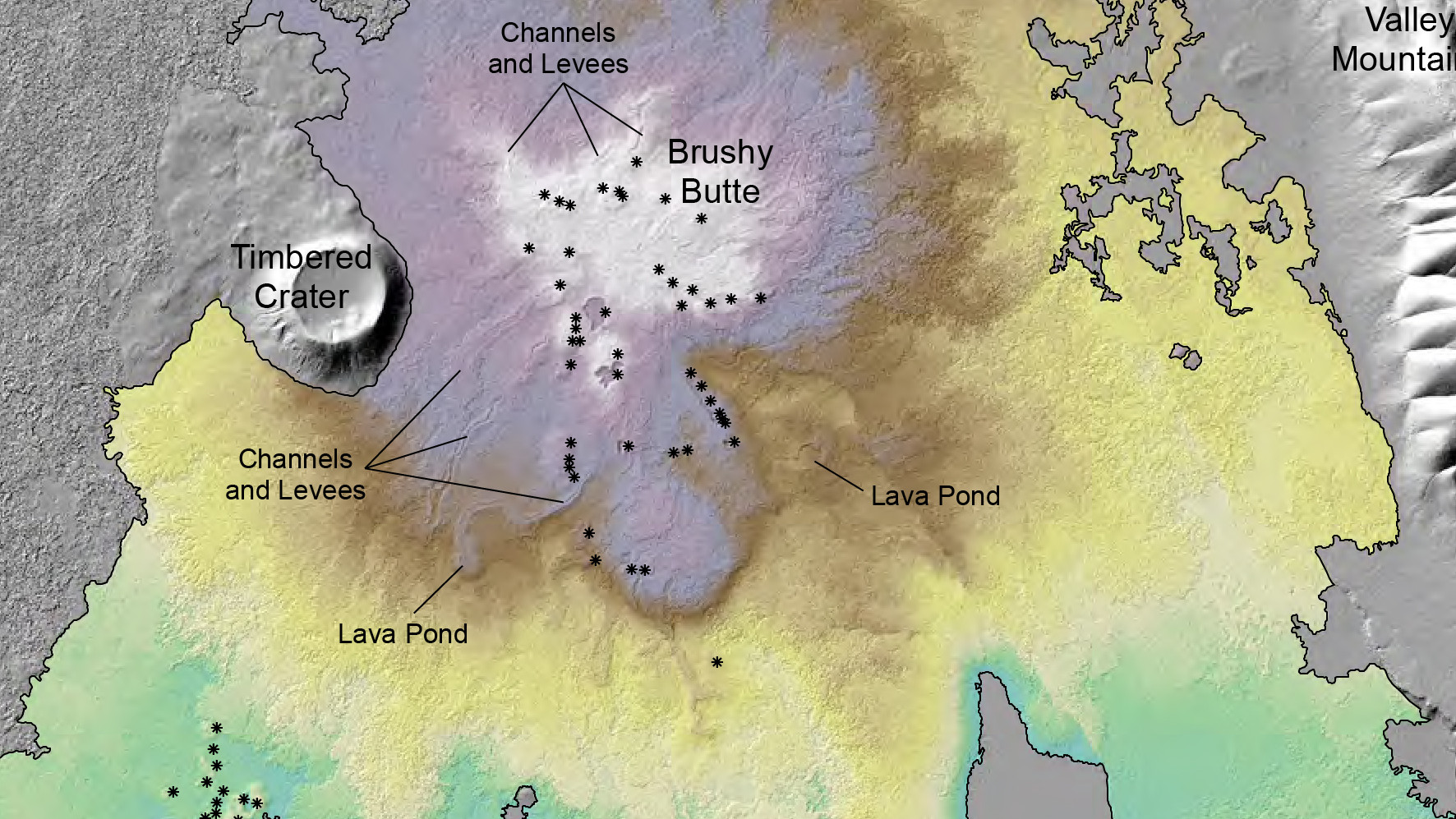 Inset of a USGS map of the Brushy Butte Volcano, full image below

HAWAIʻI ISLAND - In this week's article, scientists write about Hawaiian eruptions are used to understand volcanism in northern California.

The U.S. Geological Survey (USGS) has 5 volcano observatories tasked with monitoring low to high threat volcanoes throughout the United States.

Some regions monitored by the volcano observatories had geologically ‘young’ eruptions that are nonetheless old enough to lack written documentation, eyewitnesses, or first-hand accounts. This creates a dilemma for geologists interested in how a future eruption might occur and how long it could last.

California, for instance, has the classic-looking mountainous stratovolcano of Mount Shasta and the large caldera of Long Valley, but neither has erupted historically though each has evidence of geologically young activity. The most recent eruption in California was from 1914–1917 at Lassen Peak, creating a lava dome and related ash deposit, in what is now Lassen Volcanic National Park. An area east of Mount Shasta and Lassen Peak is relatively flat but contains ‘young-looking’ lava flows. 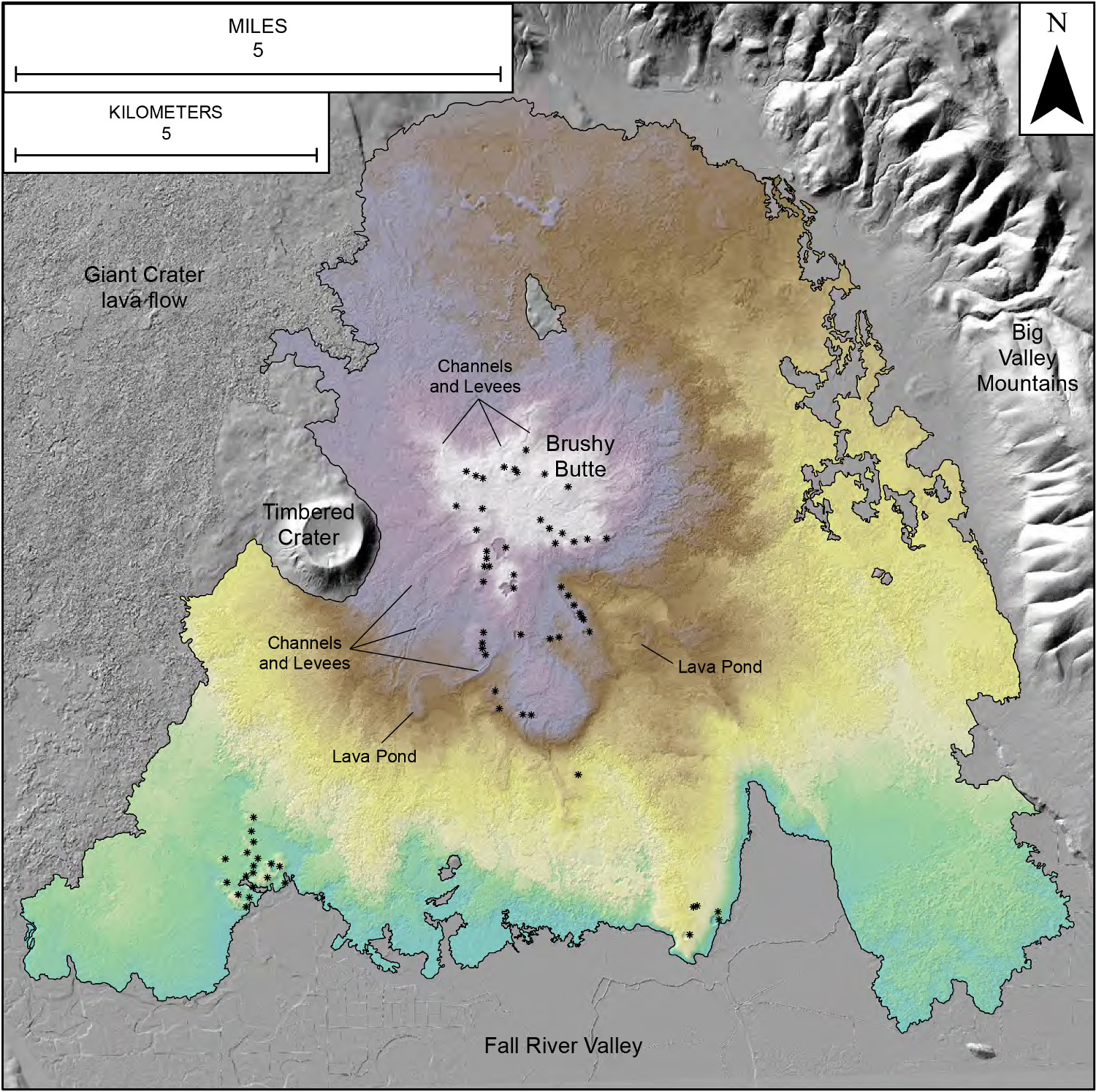 The problem is that the Brushy Butte eruptions took place approximately 35,000 years ago, and to answer this question CalVO geologists have used the old geologic axiom of ‘uniformitarianism’ or ‘the present is the key to the past.’ This describes the theory that geologic processes occurring now are likely to have occurred in the past, particularly the recent past. To better understand how Brushy Butte erupted and how long it might have taken, active volcanoes of a similar type and setting were used as an analog.

The Brushy Butte Volcano is located in a rifting area, and the type of magma erupted there is called tholeiitic basalt. Kīlauea and Mauna Loa, though not exactly the same, are close in that their lavas erupt commonly from rift zones and are usually of a similar tholeiitic basalt type. So, the recent volcanic eruptions from these Hawaiian volcanoes offer a promising glimpse of how lavas erupted from Brushy Butte Volcano may have occurred and how long it might have taken.

One of the most helpful tools used to understand the Brushy Butte eruptions is a method called Light Detection and Ranging or commonly just referred to as LiDAR. The resulting dataset creates a detailed picture of the surface of a lava flow showing the different landforms created as a volcano erupts and lava moves downhill away from its vent.

Much like a river, lava flows can develop channels, levees, breakout channels over the tops of their levees, impoundments that create lava ponds, and lava deltas. These different features formed by lava flows are created over different lengths of time.

Hawaiian volcanoes are very active, and in particular the decades-long eruption of Puʻu ʻŌʻō on Kīlauea’s middle East Rift Zone displayed many types of landforms that tholeiitic basalts can form and over what sort of timeframes. Using Puʻu ʻŌʻō as an analog, CalVO geologists estimated that the 29 closely-spaced vents and lava flows of Brushy Butte Volcano erupted over at least 20 years based on the different lava flow landforms created and their placement around the interior of the volcano.

Tholeiitic basalt lava flows in Hawaii and California behave in similar ways. HVO observations from monitoring the 35-year-long Puʻu ʻŌʻō eruption help geologists understand the processes and timeframes that can result in certain volcanic landforms. Kīlauea is a natural laboratory for active processes which help provide the key to understanding how volcanic deposits elsewhere formed in the past!