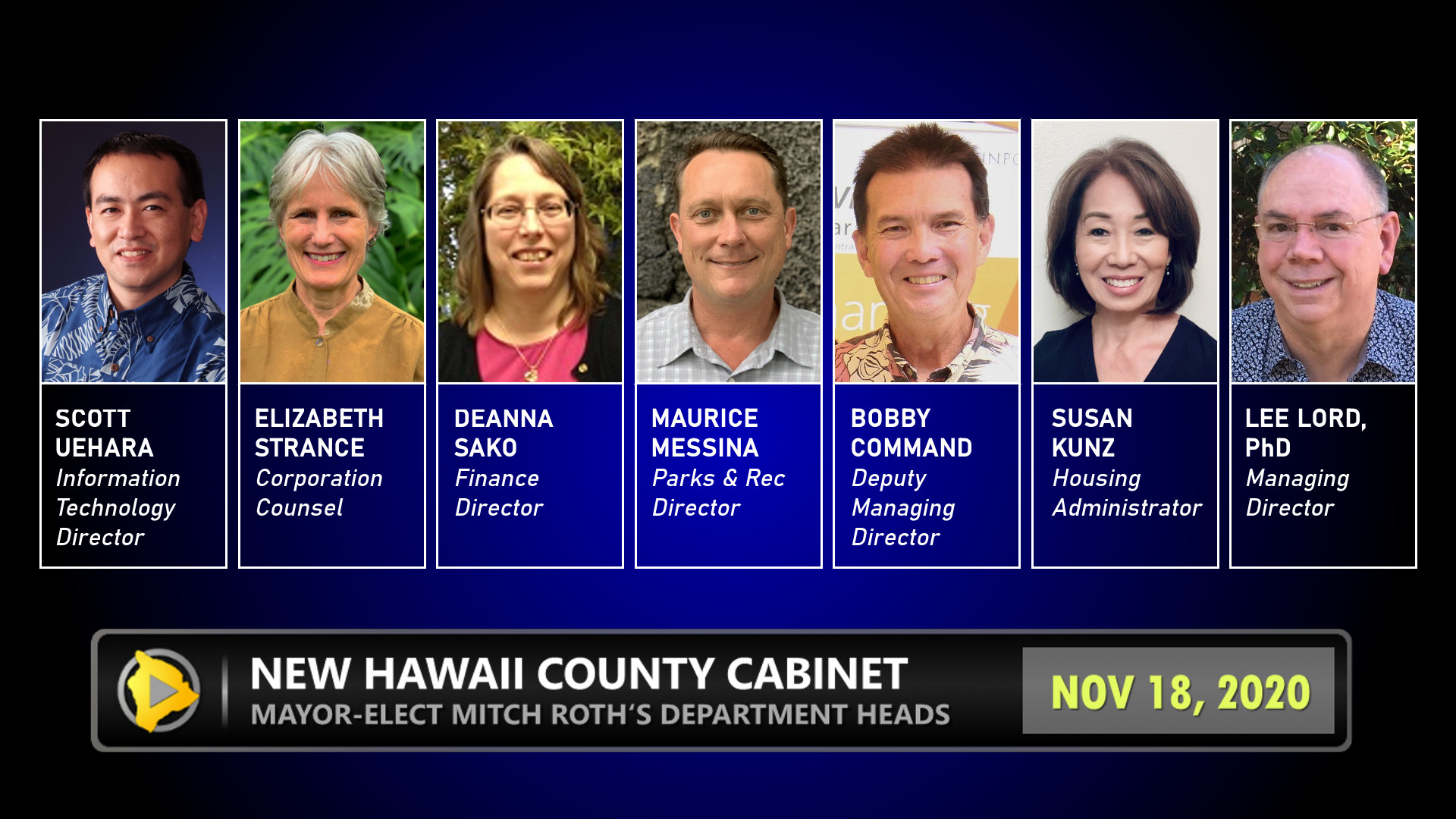 (BIVN) – Hawaiʻi County Mayor-elect Mitch Roth today announced a partial list of cabinet appointees, described as a “mixture of familiar names and new faces from all over Hawai‘i Island”.

“I’m elated with the team that we’ve selected,” said Mayor-elect Roth, who stressed during his campaign that he would assemble a cabinet representing the entire island. “My team and I talked to so many incredibly qualified applicants, but these are the best and the brightest, and we’ll be well prepared to take on the difficult challenges that lie ahead.”

A resident of Volcano, Lord is the long-time business manager at the Prosecutor’s Office. Lord will serve as the managing director of Hawaiʻi County and Roth’s second-in-command, which means Lord will be the acting mayor when Roth is out of town

From a Wednesday news release:

Lord, who holds several degrees in business administration and a doctorate in psychology, has almost three decades of experience in the County of Hawai‘i and in a variety of non-profit Human Services organizations. He was also a Division Manager in the Finance Department, executive director of Turning Point For Families, Inc. and administrator for Child and Family Service.

Command, a resident of Captain Cook, has been tapped to serve as Roth’s deputy managing director and senior policy advisor. Command held the same position during the last year of the Kenoi Administration.

Command, who will work out of the West Hawai‘i Civic Center, is a former executive assistant to the mayor and led the efforts to build the Ane Keohokalole Highway. A former journalist with more than 25 years of experience at West Hawai‘i Today, he was also deputy Planning Director for nearly three years. Born in Honolulu, Command has a degree in journalism from the University of Hawai‘i at Manoa.

Selected to be the lead attorney for the county is Strance, a former Third Circuit Judge in Kona for a decade. Currently in private practice, Strance is a graduate of Willamette University in Oregon where she earned a degree in Public Policy and Political Science, and received her law degree at Lewis and Clark College in Portland.

Sako, a Keaʻau resident, will remain in her position as the head of the Finance Department.

Sako, a familiar name at the county building, has served as Finance Director for both the Kenoi and Kim Administrations. Most recently, she became Finance Director in October 2017. She started in the county as a Parks and Recreation accountant. A graduate of Moloka‘i High and Intermediate School, she has a degree in Computer Science and Accounting from Wartburg College and a master’s in accounting science from the University of Illinois.

Messina is the current chief of staff in the Office of the Mayor. He was an integral member of the county team that responded to the COVID-19 Crisis. He was the deputy director in Parks and Recreation for two years and is a combat veteran of the U.S. Navy. Messina, who started his county career in the prosecutor’s office, holds a degree in criminal justice, naval criminal justice and is a certified paralegal.

Uehara is a resident of Hilo.

Uehara has been the information systems analyst for the Hawai‘i Police Department since 2012. Prior to that he was an information technology specialist with the HFS Credit Union in Hilo, an IT specialist at Schofield Barracks in Honolulu with the U.S. Military, Directorate of Family, Morale, Welfare and Recreation, and provided similar services to Kilauea Military Camp and Hawaiian Volcano Observatory. He has a degree in computer science from the University of Hawai‘i at Hilo.

Kunz is the current executive director of the Big Island Housing Foundation, where she manages six affordable projects comprising 251 units. Another veteran of the Kenoi Administration, Kunz was the administrator for the Office of Housing and Community Development as well as the deputy. She has served in other capacities at OHCD as well. She has a degree in business administration from the University of Puget Sound in Tacoma, Wash.

“Our cabinet members will be working all over the island,” Mayor-elect Roth said. “The desire of the people to have high-level staff on both sides of the island was loud and clear during the campaign and we intend to fulfill it.”

The directors for Planning, Research and Development, Public Works and Environmental Management will be announced in the coming days, the incoming Roth administration says.

Roth will officially become mayor on on December 7, replacing current Mayor Harry Kim, following the results of the 2020 election. The managing director, corporation counsel and department heads must be confirmed by the Hawaiʻi County Council.