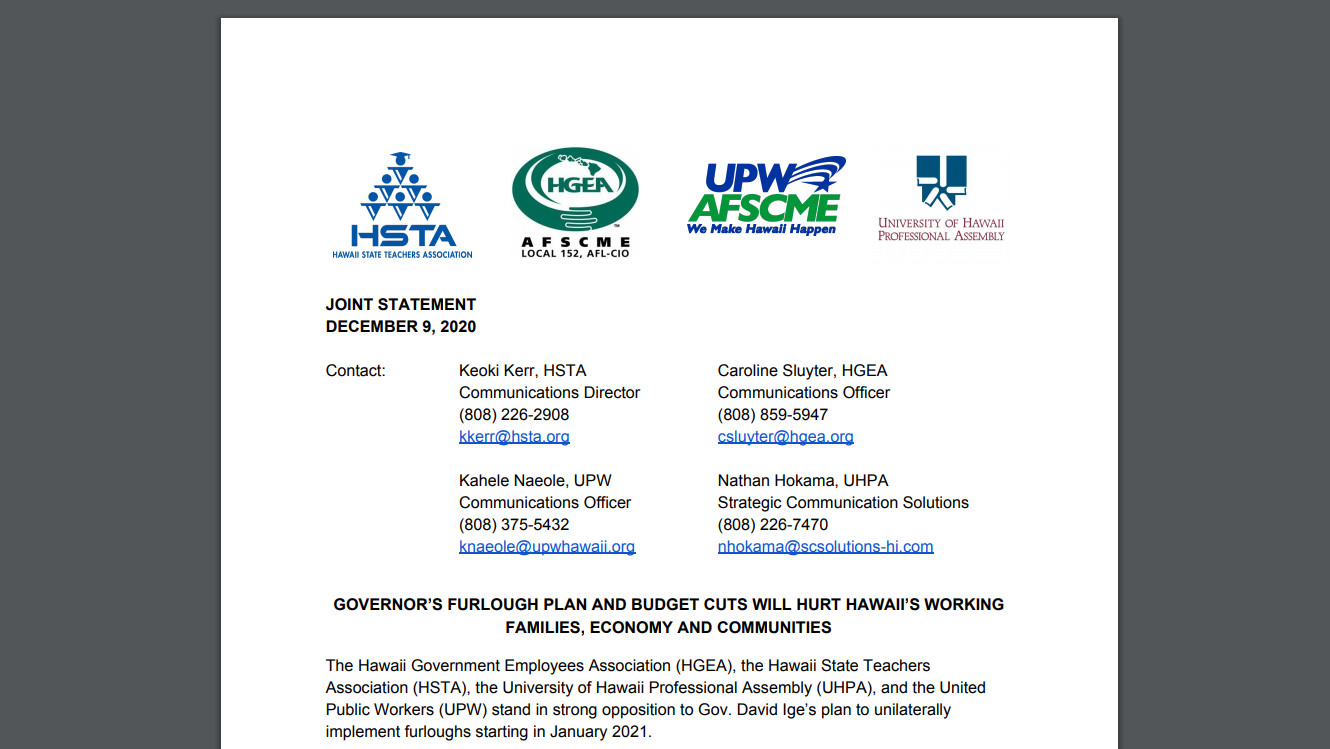 HAWAIʻI - Together, the unions say that the "furloughs and planned budget cuts, announced just before the holidays, couldn’t come at a worse time."

HAWAIʻI – Shortly after Hawaiʻi Governor David Ige announced he would be implementing furloughs for state workers starting on January 1, the public unions issued a joint news release to say they stand in strong opposition to the plan.

HSTA President Corey Rosenlee also posted a video on YouTube, saying the teachers union is “willing to take the governor to court to keep it from happening by asserting and protecting our collective bargaining rights.”

Here is the full HGEA, HSTA, UHPA and UPW statement:

This furlough plan announced just before the holidays couldn’t come at a worse time. Cutting pay for at least 10,000 government workers impacts their ability to meet financial obligations and spend in support of local businesses. Many public workers have already lost their second jobs in the tourism industry or have a spouse who is out of work, and now they face pay cuts.

These drastic cuts will carry devastating, long-lasting consequences, not only for state workers and their families. Mass pay cuts would throttle a key pillar of Hawaii’s economy – government – at a time when the tourism industry is still extremely weak and construction is slowing. This is a dangerous and badly timed policy decision that key lawmakers have publicly stated is not necessary at this time. A study released this spring found that every $1 reduction in state employees’ salaries would result in a $1.50 reduction in overall economic activity in the islands.

Under Ige’s plan, thousands of public workers would be affected, including teachers, educational assistants, custodians, groundskeepers, cafeteria workers, social workers, university professors, engineers, building inspectors, those who care for our most vulnerable populations, and hundreds of others positions.

And it’s not just about workers’ pay and how their spending impacts our local economy; lost work hours during a prolonged furlough will negatively impact all public services provided by the government.

Our elected leaders must do everything possible to avoid repeating the devastating history of the furloughs in 2009 and 2010, when public offices and facilities were forced to reduce their hours, and some—schools included—closed for several days a month. The public had to contend with services that were eliminated or endure scaled-back or delayed services while our children were denied a quality public education.

Lastly, we question the governor’s extreme timeframe. History has demonstrated the deeply negative impacts of a two-year furlough, some of which our state has yet to recover from.

This announcement is especially baffling when the U.S. Congress finally seems close to passing a stimulus package that could give aid to states and cities. Ige’s planned implementation of state employee furloughs is drastic and rash.

Hawaii’s four public unions remain committed to standing up and speaking out for our members, our local economy and the communities we all live in. Together, the unions will pursue all legal avenues to stop the unilateral implementation of these furloughs.