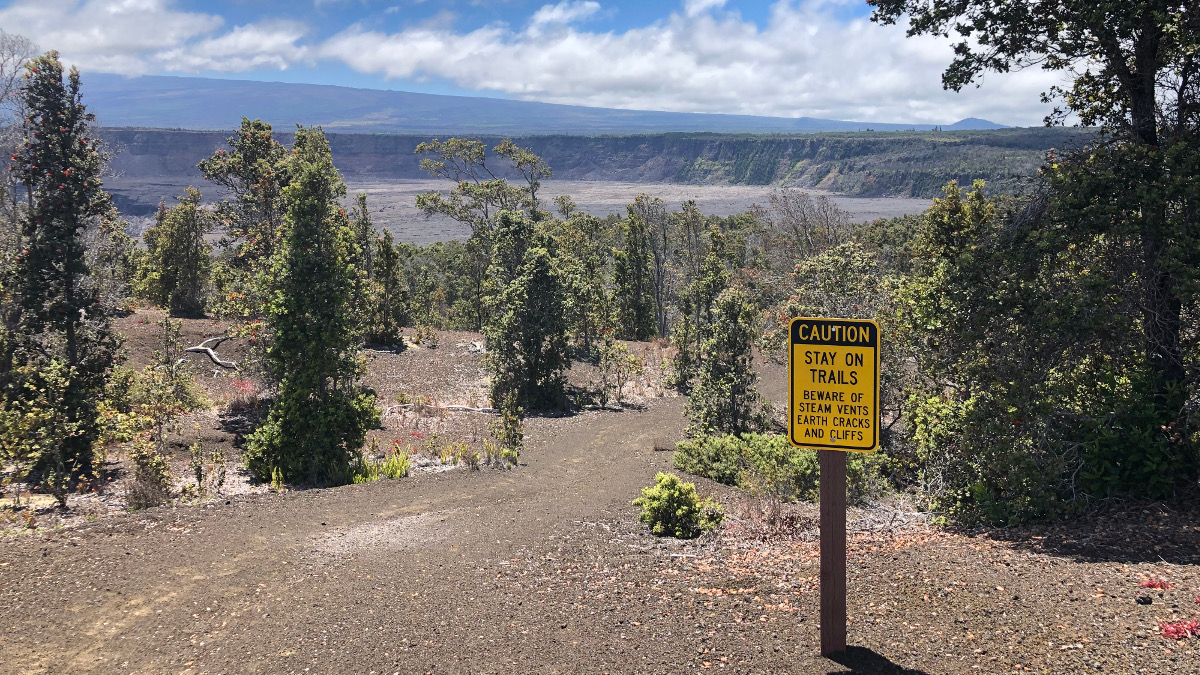 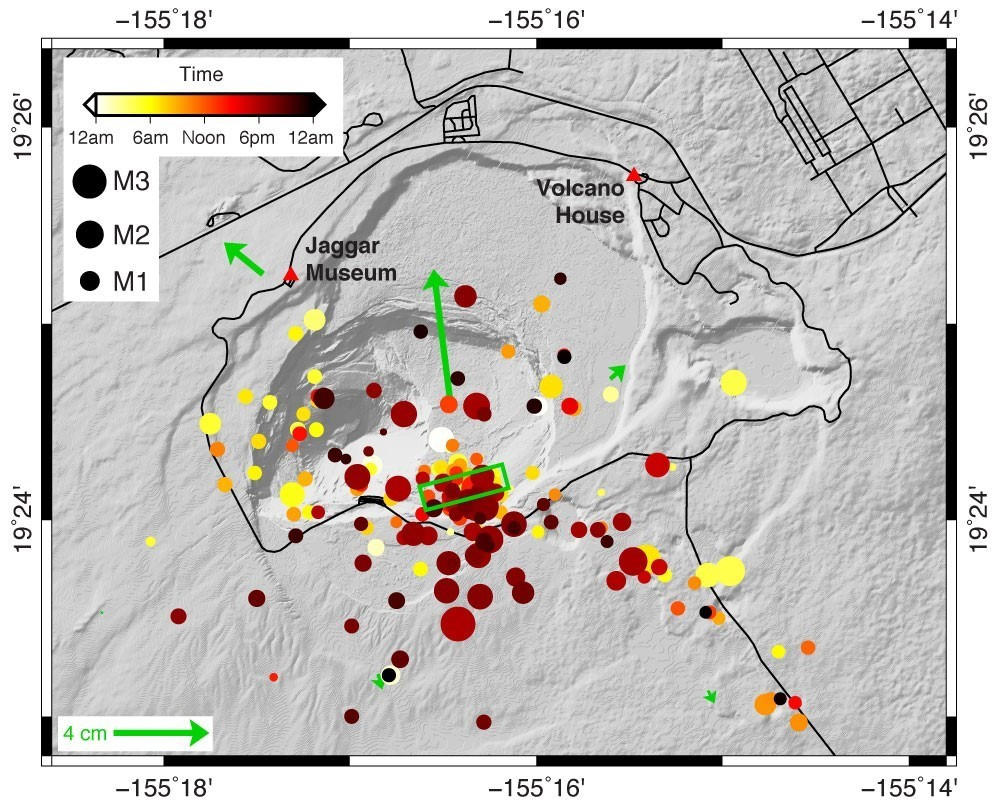 (USGS) “Map showing locations of earthquakes at Kīlauea’s summit on December 2, 2020. Motion detected by HVO’s GPS monitoring network is shown as green arrows. The length of the arrow corresponds to the amount of motion and the direction it points shows the direction of motion. Earthquakes are plotted as circles with color corresponding to the time of day they occurred, and size scaled according to earthquake magnitude. The green box shows the minimum size of the magma intrusion, as constrained by ground deformation. The intrusion model shows opening of a rectangular surface with its top edge to the south-southeast that trends downward to the north-northeast at an angle of 40–60 degrees. Black lines are local roads.”

(BIVN) – Following a week of increased seismicity in and around the summit of Kīlauea that prompted a USGS Information Statement, Hawaiian Volcano Observatory research geophysicist Ingrid Johanson writes this week’s Volcano Watch article offering more information on the recent events. From the USGS HVO:

The 2018 lower East Rift Zone eruption and summit caldera collapse marked the end of the 35-year-long Puʻu ʻŌʻō and 10-year-long summit lava lake eruptions, and the beginning of a new chapter in Kīlauea Volcano activity. The volcano is continuing to behave in ways that are a response to the major events of 2018 and “the new normal” is yet to be defined.

The range of possibilities for future events at Kīlauea is wide open and any new post-eruption observation sparks investigation as we work to better understand the volcano’s current and future state.

One such observation was the first post-eruption detection of a summit Deflation-Inflation event (DI-event) in late 2018. The return of DI-events was a clue that the shallow Halemaʻumaʻu reservoir—a magma chamber about 1.6 km (1 mile) under Kīlauea caldera—still contained significant amounts of magma. Another important post-eruption “first” was the formation of a water lake within Halemaʻumaʻu, which hasn’t occurred for at least 200 years and could have serious implications for volcanic risk.

Recently, the USGS Hawaiian Volcano Observatory’s (HVO) monitoring network recorded another first post-eruption event at Kīlauea’s summit: a magmatic intrusion. Following an earthquake swarm on November 30, 2020, that was centered in the middle of Kīlauea caldera, several pulses of heightened earthquake activity were recorded in the upper East Rift Zone. During the early morning hours of December 2, HVO detected another spike in summit seismicity rates, which continued throughout the day. Then, at about 5:45 p.m. HST, earthquake activity intensified, this time centered under the southern part of Kīlauea caldera, near the edge of the new down-dropped eastern portion. At the same time, tiltmeters began to record accelerated deformation in directions that differed from typical patterns.

Both the swarms and pattern of ground deformation were consistent with a small dike intrusion under the southern part of Kīlauea caldera. A dike intrusion is an injection of magma into host rock and can sometimes precede an eruption. But often, like on December 2, the injection does not reach the surface.

Intrusions have been recorded at Kīlauea’s summit many times. A notable recent occurrence was in May 2015, when inflation of Kīlauea’s shallow Halemaʻumaʻu reservoir led to a week of overflows of the summit lava lake and sprays of spatter visible from the Jaggar Museum overlook. That ended when magma was diverted to an intrusion in Kīlauea’s south caldera region, which lowered the summit lava lake.

Preliminary models suggest that the December 2 intrusion was small. It contained anywhere from 10–30 times less magma than the intrusion in May of 2015 and its volume is equivalent to the amount of lava erupted in just 1–2 hours from Fissure 8 during the 2018 eruption. However, even though it’s small, it’s still a potential clue for future behavior.

In 1974, earthquake swarms in the upper East Rift Zone and southern portion of Kīlauea caldera, as well as changes in summit tilt, preceded an eruption from Keanakākoʻi Crater by about 10 hours. The 1974 eruption produced lava fountains up to 30 m (100 feet) high and sent lava flowing into Kīlauea caldera. The eruption also opened fissures near Luamanu Crater that sent a lava flow over Chain of Craters Road.

This scenario was in the minds of HVO scientists as the events of December 2 unfolded and an overnight watch was established to closely monitor data feeds. However, as the HVO Information Statement on December 3 indicated, earthquake rates and deformation slowed down quickly, and no additional signs occurred to indicate that an eruption was truly imminent. Seismicity and deformation rates under Kīlauea’s summit have mostly returned to what they were prior to this intrusive episode, although a new swarm of very small earthquakes is being monitored as this article goes to press.

Though small, this intrusion is a reminder that Kīlauea can still be considered one of the most active volcanoes on earth and that the next eruption from Kīlauea Volcano is just a matter of time. We are still encountering new “firsts” in the post-2018 regime that lead us toward a better understanding of this new period of activity. HVO, as always, keeps a close eye on monitoring data for any changes, big or small.