HAWAIʻI VOLCANOES NATIONAL PARK - As of just after 7 a.m. Thursday morning, the lava lake surface is was 1,483 feet below the crater rim observation site, indicating that the lake is 554 feet deep. 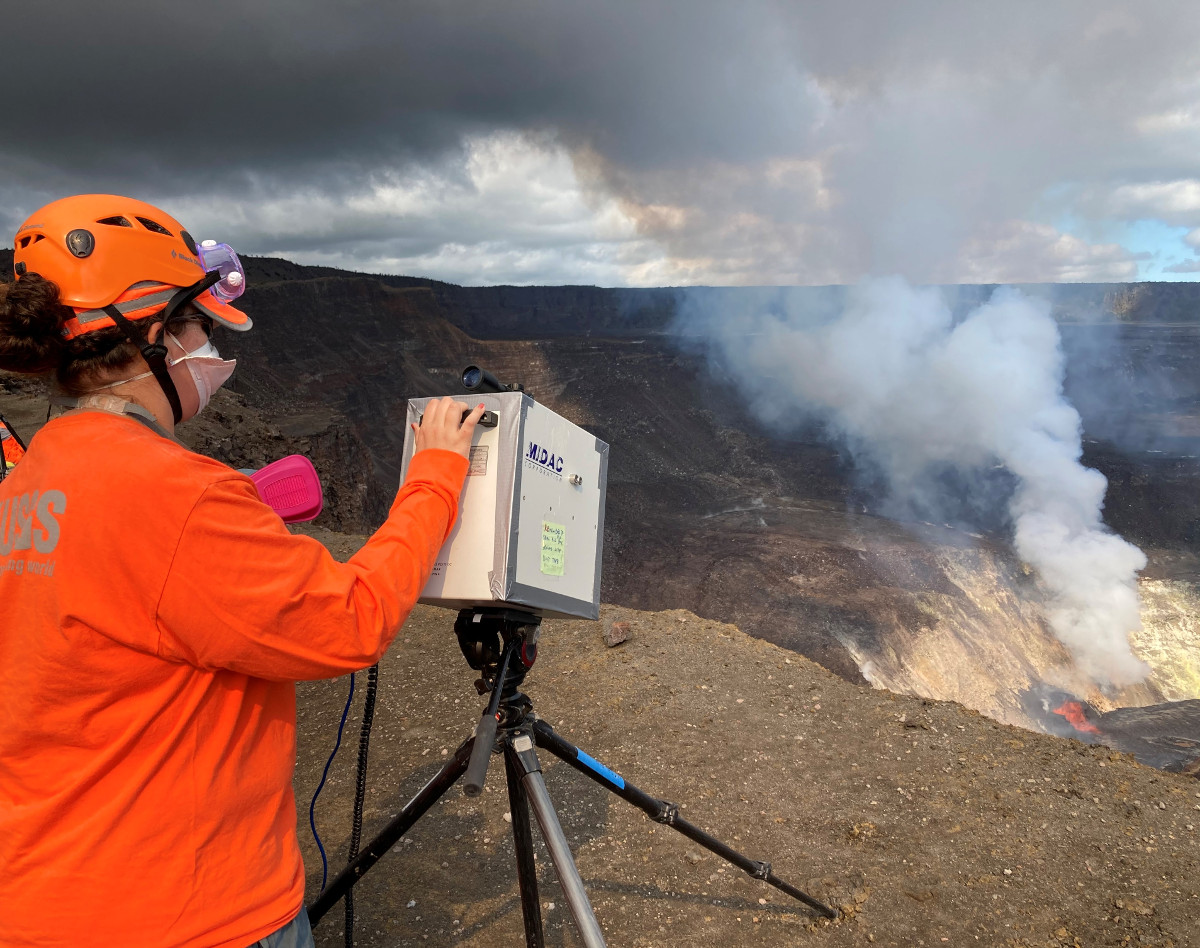 On the rim of Halemaʻumaʻu crater, Hawaiian Volcano Observatory scientists measure gas concentrations from the ongoing Kīlauea Volcano summit eruption using a FTIR spectrometer. The sulfur-dioxide (SO2) rich eruption plume also contains water vapor, carbon dioxide, and halogen gases such as HCl and HF. Light-weight pieces of volcanic glass, such as Pele’s hair and tears, are also carried downwind in the plume. USGS photo by T. Elias on December 23.

It is day four in the new eruption of Kilauea.

The USGS Hawaiian Volcano Observatory is still capturing some unique video of the eruption, as the scientists maintain a 24-hour watch from the crater rim. Like this glimpse of a wind vortex on the lava lake, which was strong enough to rip up pieces of the lake’s crust.

The scientists are also taking to the sky over the caldera, for a bird’s eye view.

There has been no significant change in the eruption, and summit tiltmeters continue to record steady deflationary tilt.

As of just after 7 a.m. Thursday morning, the lava lake surface is was 1,483 feet below the crater rim observation site, indicating that the lake is 554 feet deep. Scientists estimate the lake rose 39 feet in just under 24 hours. 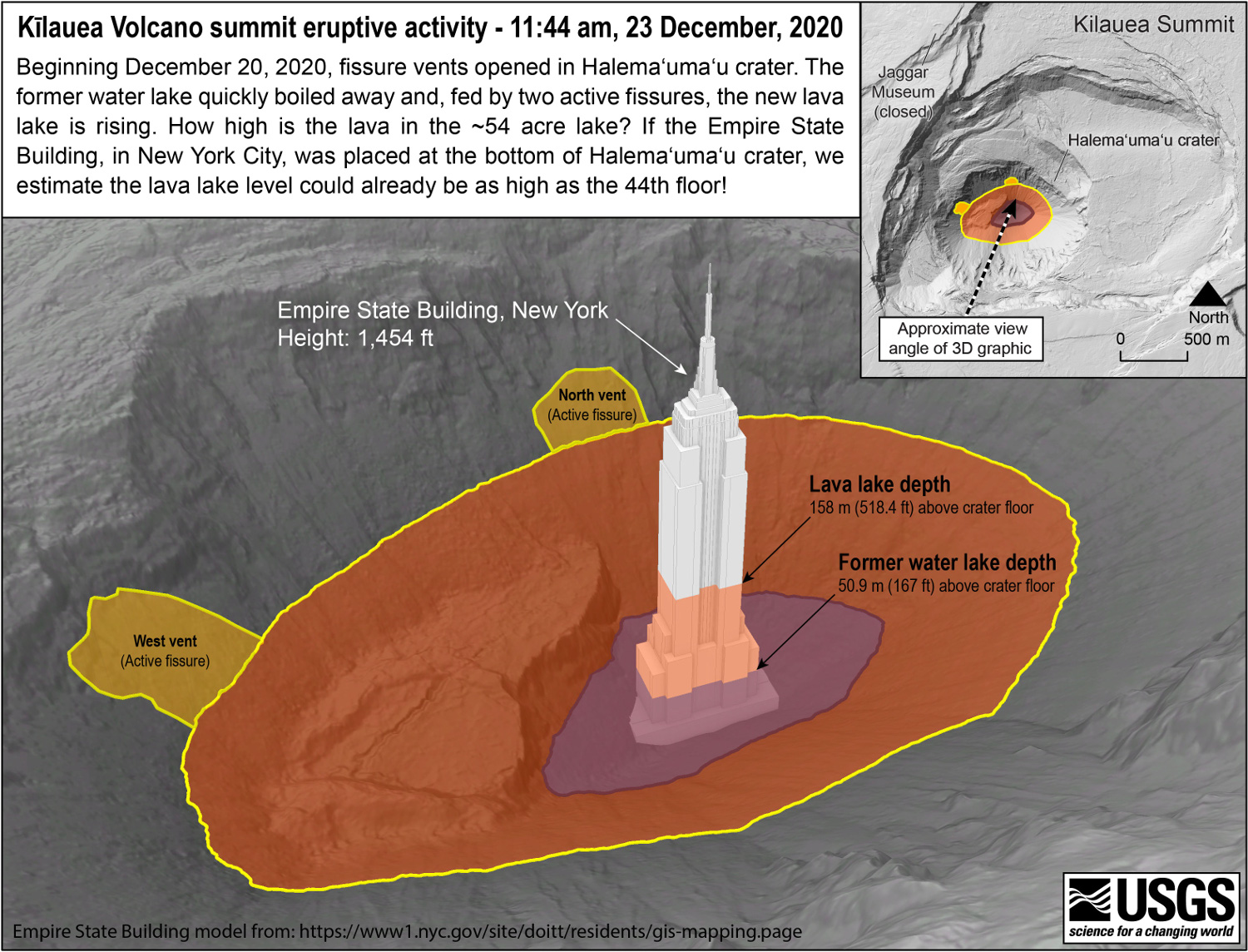 This USGS graphic gives some context to the lava lake depth, comparing it to the empire state building. If the New York City landmark were submerged in the crater, the lava would be as high as the 44th floor.

The approximate surface area of the new lake is now 69 acres. The lake is in the shape of an oval, and is roughly 780 yards long and 500 yards wide.

Lava fountaining continues at two locations, and is more vigorous at northern vent. Activity at the western vent is intermittent.

The island of cooler, solidified lava is still rafting around on the surface of the rising lake. Scientists say it appears to be composed of fragments of ejecta, and may have originated from violent interactions between lava and water during the opening hours of the eruption, when the lake was boiled off.

The USGS has released some new tools to help the public keep track of the ongoing summit changes.

This photo slider shows the before and after, starting with the summit water lake as seen on December 20 on the left, and the view of the new lava lake, four days later on the right. The water lake was vaporized in a matter of minutes when the new eruption began.

Scientists posted a thermal timelapse, showing the switch from water-lake to lava-lake. They say during the initial phase of the eruption, a large steam-plume is generated, as lava interacts with, and boils-off the water lake. The temperature scale is in Celsius, and in the initial phase is saturated. The camera settings were later changed to accommodate the much higher temperatures of the new lava in the crater. They say the sequence also shows the early evolution of a lava lake: a process rarely observed in detail. As the lava fills the crater, it has approached the level of the main fountaining vent, which could soon be submerged.

Scientists are also plotting the rise of the lava lake using this new graph, which is posted to the HVO website. They noted today that a thick plume has made lava lake height measurements difficult.

Sulfur dioxide emission rates remain high, and are now estimated at around 35,000 to 40,000 tonnes/day. That number has been revised upwards from previous measurements.

That means vog is now in the forecast for Hawaii island, especially in West Hawaii where the volcanic smog usually drifts.

Air quality can also deteriorate around the summit, inside Hawaii Volcanoes National Park. Typically, the prevailing tradewinds from the northeast carry the plume of volcanic gas to the southwest and away from the summit. But period shifts in the weather can degrade the air quality inside the park to unhealthy levels. Using online monitoring networks, air quality looked good at midday, but the records show that the morning hours were in the red. Visitors are urged to plan their visit and check the air quality website before coming to the park.

Scientists say the eruption is currently confined to the summit, and monitoring data show no changes to the lower East Rift Zone or other parts of the volcano. The eruption is said to be stable, with no indications of imminent summit collapse like in 2018.