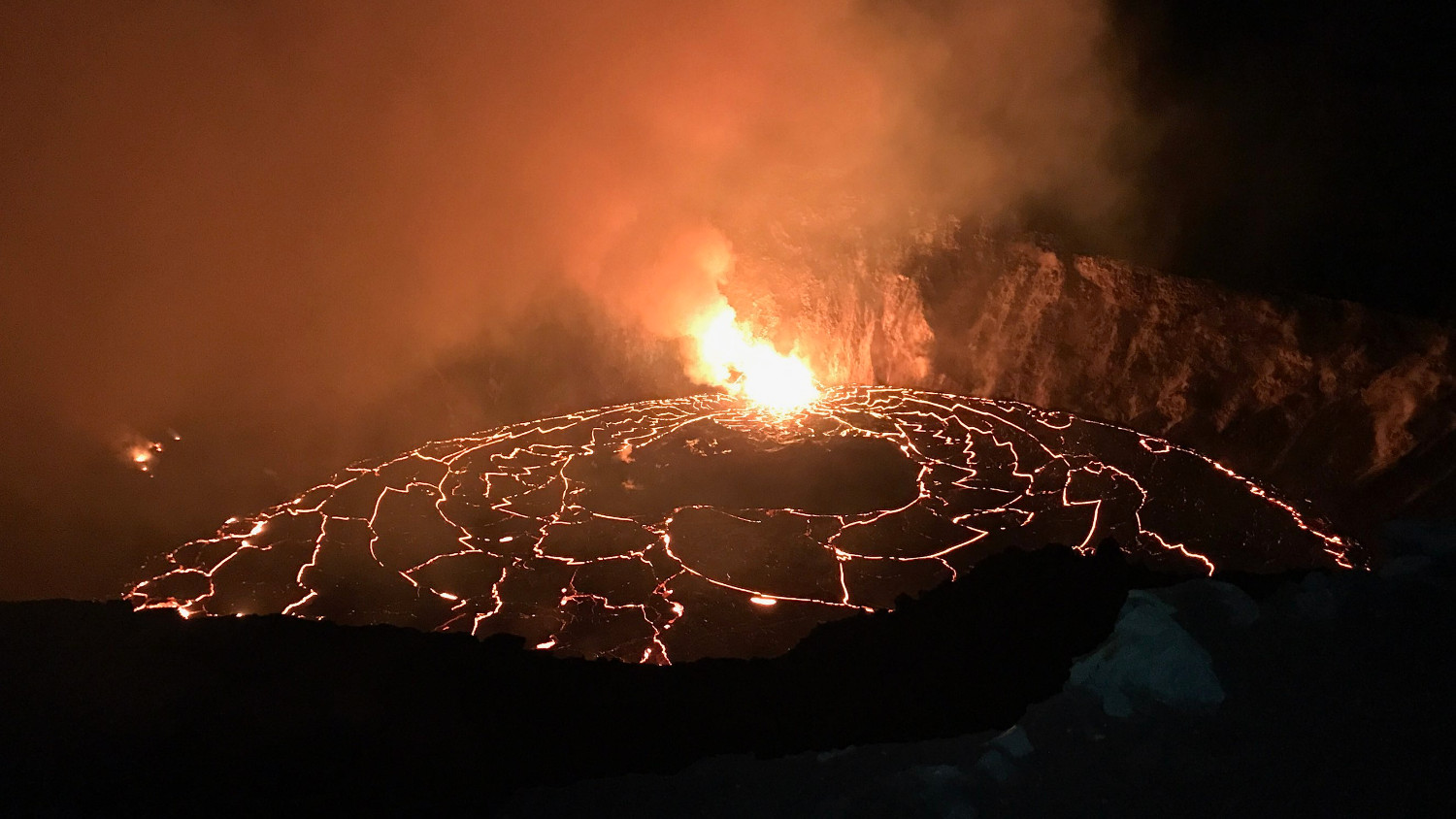 An early December 25, 2020, morning view of the ongoing eruption in Halema‘uma‘u crater at Kīlauea's summit. Overnight fountaining continued to feed the rising lava lake, which slowly fills Halema‘uma‘u. This photo, taken at approximately 2:30 a.m. from the south rim of the crater, shows the main northern vent that is being drowned by the rising lava lake. Intermittent activity continues at the weaker west vent. USGS photo by J. Schmith and C. Parcheta. 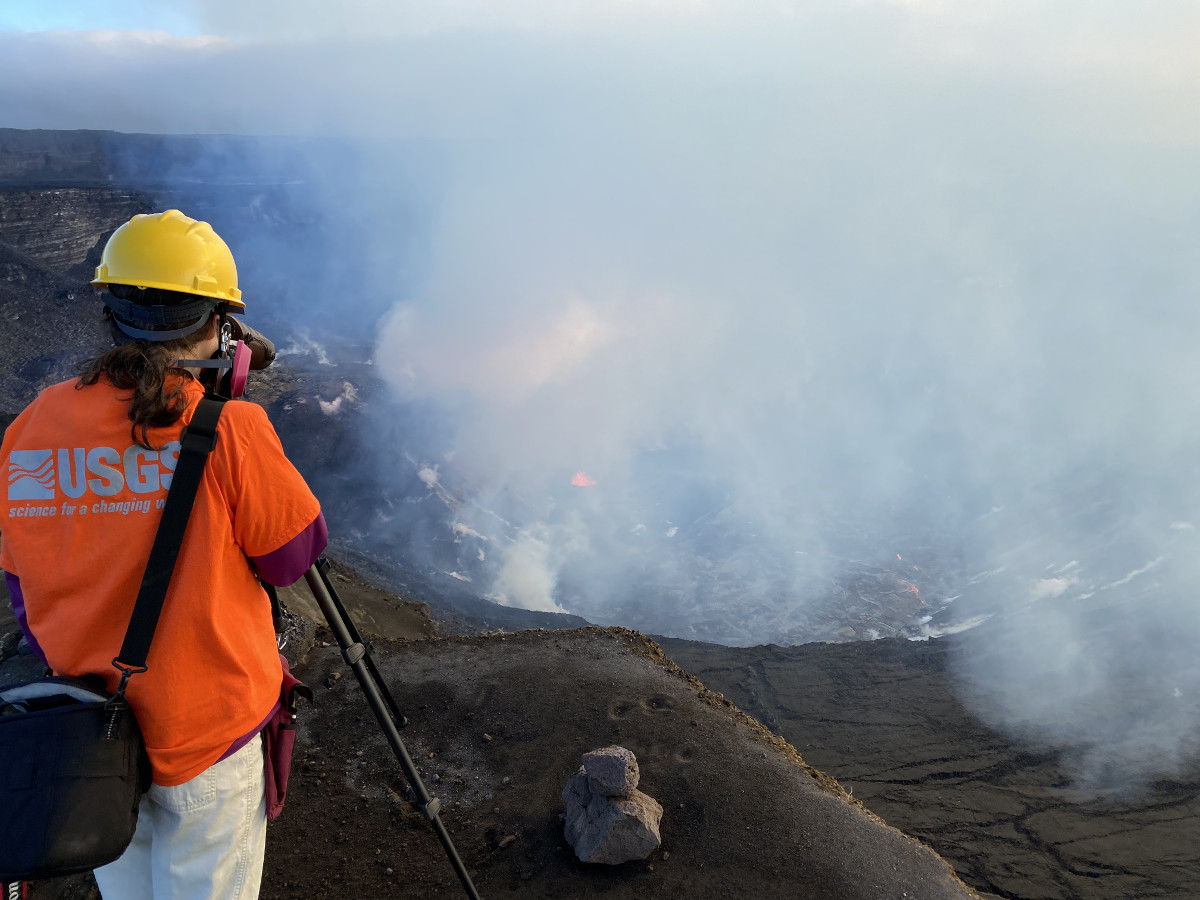 (BIVN) – The new eruption of Kilauea volcano continued on Christmas morning, with no significant change.

Scientists say the lava activity remains confined to the summit at Halemaʻumaʻu, from two vents on the north and northwest sides of the crater. As of 7 a.m., the growing crater lake was 176 meters, or 577 feet deep. High sulfur dioxide emissions continued.

This week’s Volcano Watch article, written by U.S. Geological Survey Hawaiian Volcano Observatory scientists and affiliates, is all about the new eruption:

‘Twas the Sunday before Christmas, the eve of the winter solstice, and festive holiday lights blinked of bright red and green. And then, shortly after 9:30 p.m. HST on December 20, so did the Hawaiian Volcano Observatory’s (HVO’s) volcano alert level/aviation color codes for Kīlauea!

In the near blink of an eye, Kīlauea Volcano’s NORMAL/GREEN status was quickly increased to WARNING/RED as lava returned to Halemaʻumaʻu.

There was concern that magma- or lava-water interactions might result in explosive activity at Kīlauea’s summit due to the intriguing water lake that formed within Halema‘uma‘u over the past 17 months. However, the water lake quickly boiled away in large billows of steam that reached more than 10 km (30,000 ft) into the sky, as streams of lava fed by fountaining vents in the crater walls filled the space where the water once pooled. The water lake was replaced by a lava lake.

As described in recent “Volcano Watch” articles and Information Statements, HVO observed increasing levels of seismicity and ground deformation at Kīlauea summit for several weeks prior to this eruption. Precursory signals were not continuous however, as seismic swarms and deformation transients would diminish and return to background levels before ramping up again, such as they did before and after the small intrusion on December 2. No changes in gas emissions or the state of the water lake were observed.

Nevertheless, based on patterns of earthquakes and deformation, HVO was planning to increase Kīlauea’s alert level/aviation color code to ADVISORY/YELLOW on Monday, December 21, but the eruption started the night before instead!

The eruption was preceded by an earthquake swarm beneath the summit around 8:30 p.m. HST. Ground deformation transients detected by summit tiltmeters immediately before the eruption were surprisingly small, and there were no changes in gas emissions or other data. A bright glow and vigorous steam plume, generated by the boiling water lake in Halemaʻumaʻu, was subsequently observed on HVO webcams beginning approximately 9:30 p.m. HST.

HVO elevated Kīlauea’s volcano alert level to WARNING and its aviation color code to RED on December 20 as the progression of events was uncertain and there was concern for potential steam-driven explosions and related hazards.

HVO scientists responded immediately and visually confirmed from the field that lava was visible within Halemaʻumaʻu. The steam plume dissipated shortly thereafter.

The eruption began as three fissures opened in the north and northwest walls of Halemaʻumaʻu, behavior that is not uncommon for Kīlauea. When magma migrates upwards to the surface as a dike it does so along the path of least resistance, which is on crater walls versus the crater floor.

On December 21, HVO lowered Kīlauea’s volcano alert level to WATCH, meaning “eruption is underway but poses limited hazards.” The aviation color code was lowered to ORANGE, meaning “eruption is underway with no or minor volcanic-ash emissions.” At present, the primary hazard of concern regarding this new activity at Kīlauea’s summit is the high level of volcanic gas, which is generating volcanic air pollution (vog) downwind.

As of December 24, two vents continue to feed the rapidly enlarging lava lake filling Halemaʻumaʻu crater. If the eruption continues at its current rate, these two remaining vents will soon be inundated, possibly by the time this article is published. As of 7:00 a.m. today, the lake was 169 m (554 ft) deep. The surface area was 25 ha (69 acres) and lake shape was still roughly oval with an east-west length of 715 m (780 yds) and a north-south width of 460 m (500 yds).

The eruption is currently confined to Halemaʻumaʻu within Hawai’i Volcanoes National Park and monitoring data show no changes to the lower East Rift Zone or other parts of the volcano. Seismicity and ground deformation have been concentrated at the summit and the eruption is stable, with no indications of imminent summit collapse like in 2018.

This eruption has already provided new and exciting scientific observations, which we’ll be sharing in future “Volcano Watch” articles. For now, check the Kīlauea Current Eruption webpage for information and field updates on the ongoing activity.

A short period of quiescence – about 28 months following the 2018 eruption—has ended for Kīlauea Volcano. The summit water lake era has come and gone and a new era of eruption activity is upon us – lava has returned to Halemaʻumaʻu.