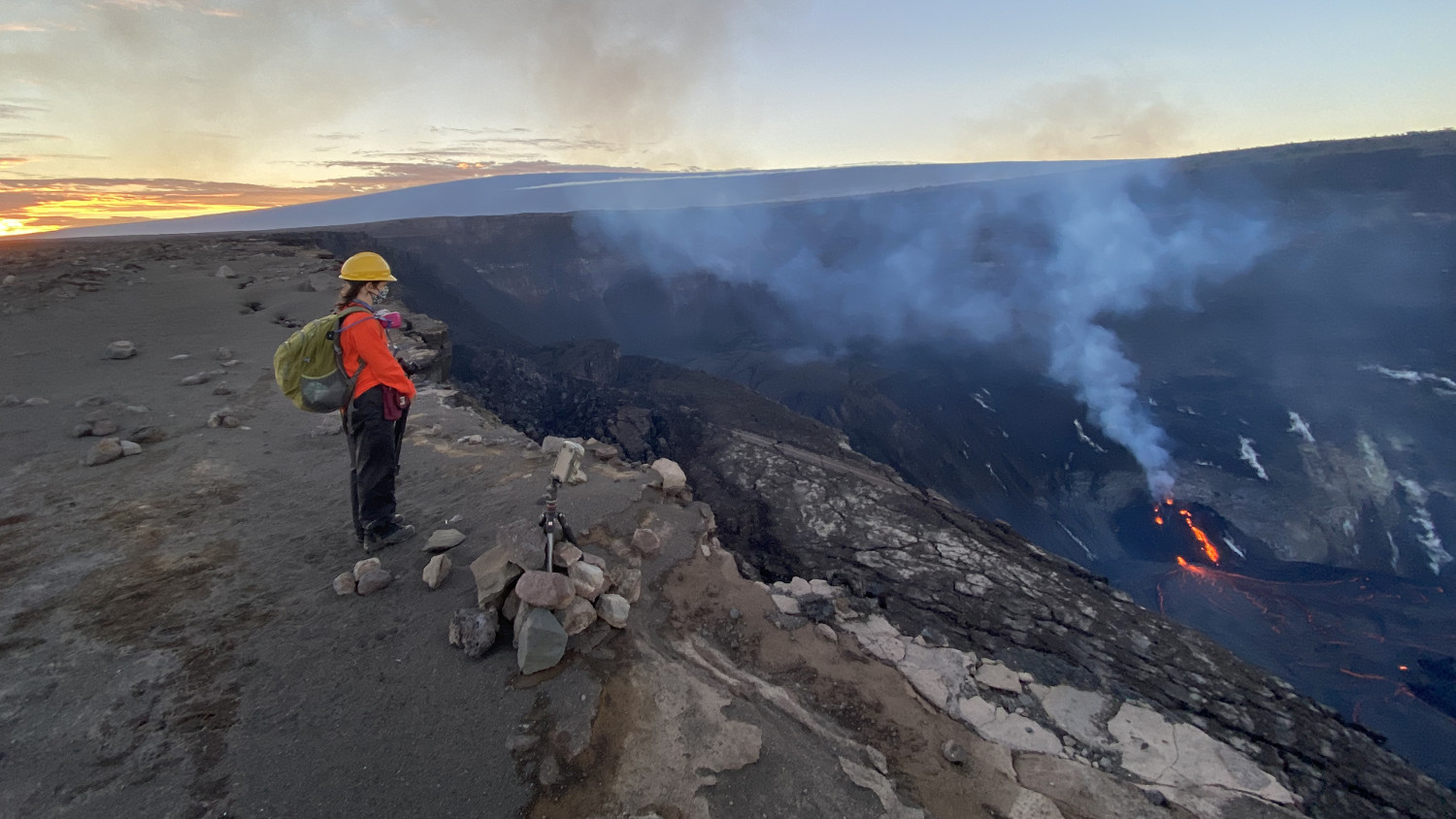 The Kīlauea summit eruption within Halema‘uma‘u crater continues this evening with no major changes from earlier today, December 27. The western fissure vents remain active. A HVO scientist makes observations of the ongoing activity. Mauna Loa Volcano is visible in the background. USGS photo taken at approximately 5:45 p.m. HST on December 27 by F. Trusdell.

The eruption continued at the summit of Kilauea on Sunday.

Scientists note slightly reduced vigor on Sunday, with two narrow channel of lava spilling from the west vent on the wall of the caldera.

A December 26 helicopter overflight provides this updated aerial view over the eruption. The video has sped up by 3 times.

According to the USGS Hawaiian Volcano Observatory, sulfur dioxide emissions have dropped. Rates are now down to about 5,000 tonnes/day, compared to about 20,000 on Christmas; much lower than the 40,000 tonnes/day measured at the start of the eruption.

All lava activity is confined to summit caldera. HVO noted in its Sunday update that geodetic monitors also indicate that the upper portion of the East Rift Zone contracted seven days ago, during the start of the eruption. The scientists say this was associated with magma withdrawal to feed the summit vents. There is no seismic or deformation data to indicate that magma is moving into either of Kīlauea’s rift zones. 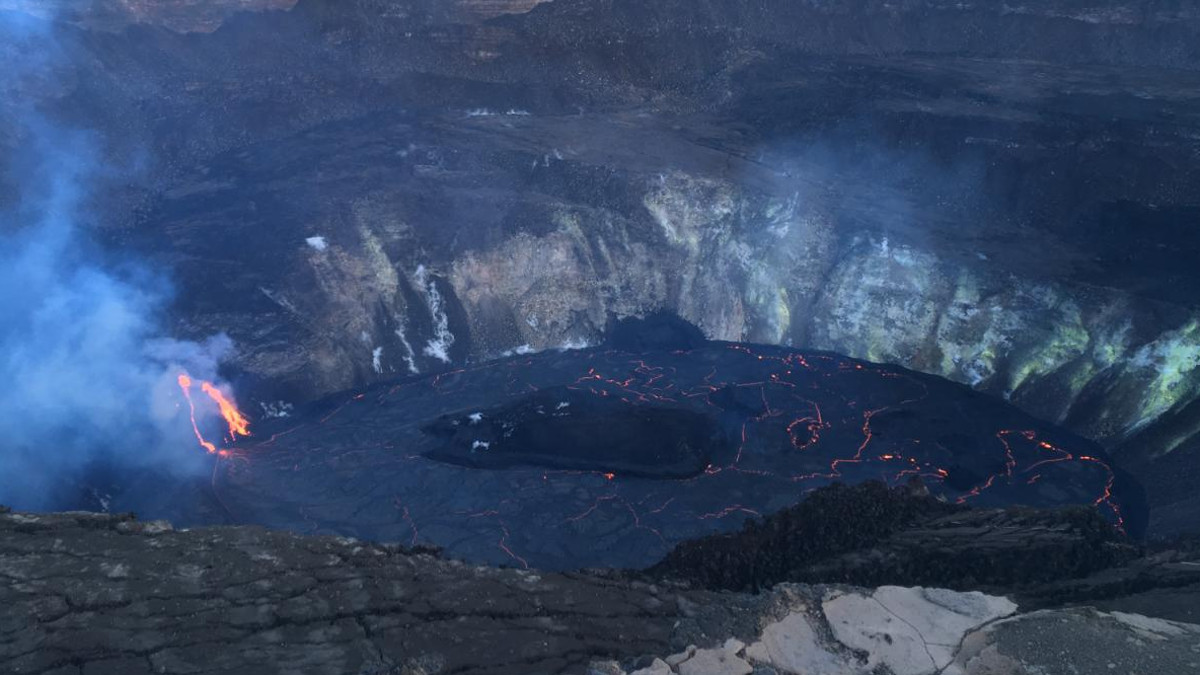 HVO field crews were unable to observe early morning eruption activity in Halema‘uma‘u crater at Kīlauea’s summit due to high winds. Upon return to the eruption site this morning, HVO field crews noted the reduced vigor at the western vent. The northern/eastern vent remains inactive. At approximately 7:30 a.m. HST today (Dec. 27), HVO field crews measured the lava lake as 177 m (581 ft) deep. The lava lake level has not changed significantly over the past 24 hours. USGS photo by M. Patrick.

The lava lake within the summit crater has changed little in the past day and this morning was about 581 feet deep. Scientists say it is 1,340 feet below the south rim. The lake volume remained about 21 million cubic meters, which is equivalent to 27 million cubic yards or 4.8 billion gallons.

For comparison, HVO says the maximum lava lake depth measured during the 1959 eruption of Kīlauea Iki, was 413 feet.

This topographic map of the summit caldera shows contour lines every 66 feet above sea-level. The current lava lake, in red, has filled 580 feet of the crater since the eruption began one week ago. The lava lake will have to rise another 328 feet before it overflows the crater rim on the lowest part of the northeast edge, shown with a green line.

The lava lake has another 656 feet to go before it overflows onto the west portion of the down-dropped block that formed in 2018. That level is shown here with the blue line. Scientists say the lava lake was previously rising several tens-of-meters per-day. But the lake has has not risen significantly over the past day.

The ongoing eruption within Halema‘uma‘u crater continues at the western fissure vents. Yesterday morning, December 26 around 2:40 a.m. HST, all three vents increased in eruptive vigor and were sending channels of lava into the lava lake. The increase in lava discharge from the western vents continued into yesterday afternoon (left photo). Today, December 27, the eruptive activity appears to have slightly decreased. This morning at approximately 9:30 a.m. HST (right photo) the western-most vent (left) had a small skylight visible with occasional spatter ejected. The central vent channel was crusted over, but a swift stream was visibly entering the lava lake near the tubes base. The eastern (right) vent continues to produce an open channel that feeds into the lava lake. USGS photos by M. Patrick.

This thermal webcam timelapse, which captures one image every ten minutes for a 24 hour period. The video shows the shift in eruptive activity early on December 26. Just before 3 a.m., the active northern vent shut down as it became drowned by the rising lava lake. At the same time, the western fissure vents abruptly increased in vigor. Scientists note the change in the lava lake surface motion, caused by the shift in the eruption.

HVO has produced another image slider, this time showing the difference between the summit activity on December 25th on the left, back when the northern vent was the more vigorous of the two fissures, and December 27 on the right, after the rising lava lake drowned the north vent and the west vent became more active.

The Hawaiian Volcano Observatory continues to closely monitor Kilauea’s seismicity, deformation, and gas emissions for any sign of reactivation. Scientists are maintaining visual surveillance of the summit and the East Rift Zone. HVO says it will continue to issue daily updates and additional messages, as needed.