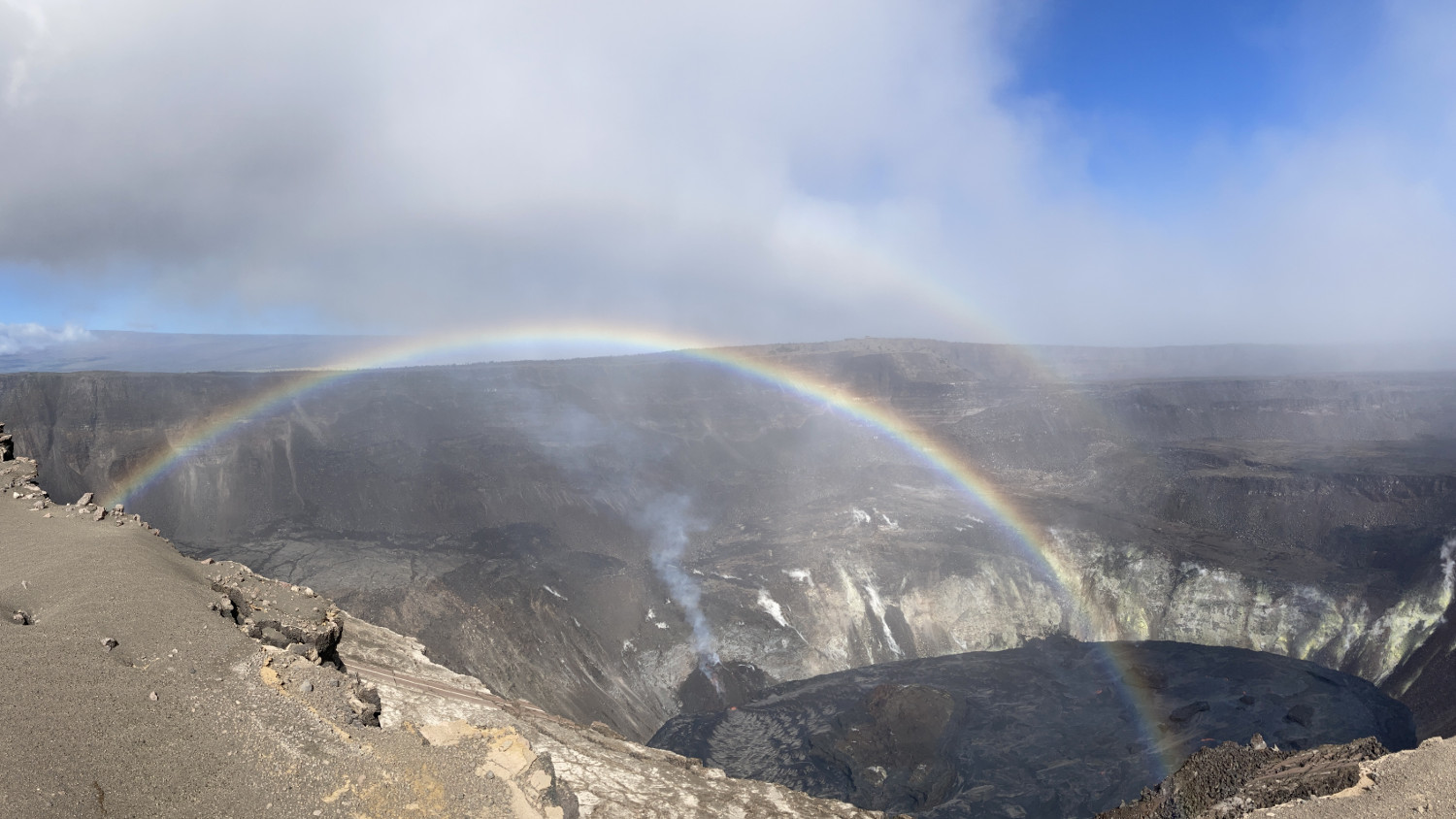 (USGS HVO) - View to the northwest from the south rim of Halemaʻumaʻu crater showing the lava lake in Halemaʻumaʻu at Kīlauea Volcano's summit. The active western fissure is visible above the lake, producing minor spatter and a gas plume from vents at the top. This vent is also sending lava into the lake from a lava tube opening at the lake surface, and producing a small dome fountain. Numerous islands are visible floating in the lake, which itself is perched a couple meters (a couple yards) above its margin. USGS photo by H. Dietterich at 10:11 a.m. HST on 1/6/2021. 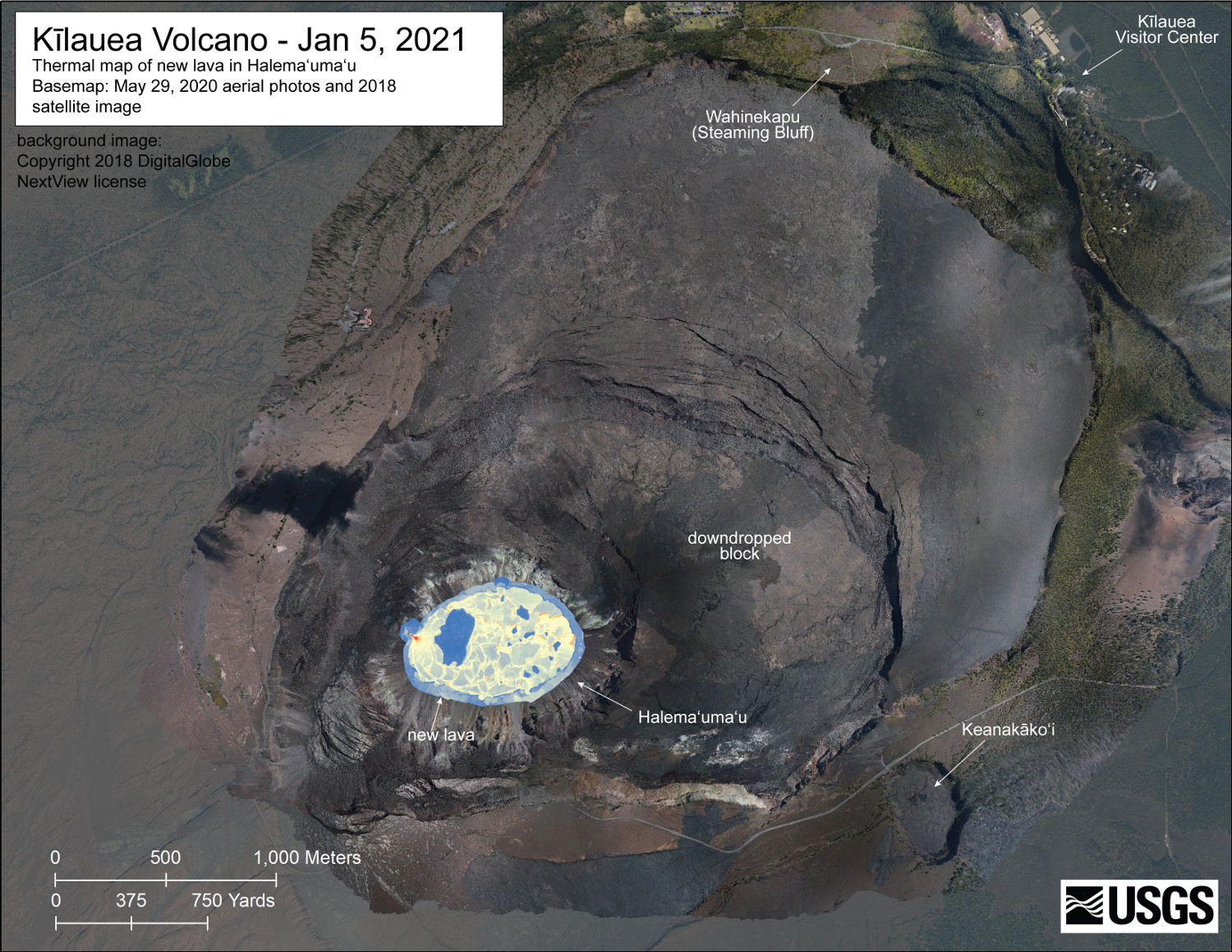 (USGS HVO) – A helicopter overflight on January 5, 2021, at approximately 8:30 a.m. HST allowed for aerial visual and thermal imagery to be collected of the eruption within Halema’uma’u crater at the summit of Kīlauea Volcano. The dimensions of the lava lake are 760 m (831 yd) E-W axis and 470 m (514 yd) in N-S axis. The most recent estimate of lake area is about 28 hectares (69 acres). The scale of the thermal map ranges from blue to red, with blue colors indicative of cooler temperatures and red colors indicative of warmer temperatures. USGS map by M. Patrick.

(BIVN) – The eruption of Kīlauea continues, with all activity confined to Halemaʻmaʻu within the summit caldera.

Sulfur dioxide emission rates remain elevated. Measurements made on Sunday (Jan. 3) were in the range of 3,000-6,500 t/d, in line with what has been seen over the last week.

On Wednesday, the USGS Hawaiian Volcano Observatory said there was no indication that additional magma is currently moving into either of Kīlauea’s rift zones.

Activity Summary: Lava activity is confined to Halemaʻumaʻu with lava erupting from vents on the northwest side of the crater. Wednesday afternoon (Jan. 6), the lava lake was 194 m (636 ft) deep and perched 1-2 m (1-2 yds) above its edge. SO2 emission rates were still elevated.

Summit Observations: Sulfur dioxide emission rate measurements made on Sunday (Jan. 3) were in the range 3,000-6,500 t/d since last Sunday (Dec. 27)–the same range of values that was common for emissions from the pre-2018 lava lake. Summit tiltmeters recorded weak deflationary tilt since Jan. 1; at 3pm yesterday (Jan. 6), rapid deflationary tilt started similar to the beginning of a possible deflation-inflation (DI) event. Seismicity remained elevated but stable, with steady elevated tremor and a few minor earthquakes.

East Rift Zone Observations: Geodetic monitors indicate that the upper portion of the East Rift Zone (between the summit and Puʻu ʻŌʻō) contracted while the summit deflated at the onset of this eruption. There is no seismic or deformation data to indicate that additional magma is currently moving into either of Kīlauea’s rift zones.

Halemaʻumaʻu lava lake Observations: The west vents spattered from the top of a small cone plastered on the northwest wall of Halemaʻumaʻu crater. This morning, lava is presumed flowing through crusted channels to the lake and also feeding a small photogenic dome fountain in front of the west vents probably from a submerged portion of the vent.

The lava lake was 194 m (636 ft) deep Wednesday afternoon (Jan. 6) and had a volume greater than 27 million cubic meters (35 million cubic yards). The most recent thermal map (Jan. 5) provided the perched lake dimensions as 760 by 520 m (830 by 570 yds) for a total area of 28 ha (70 acres)–slightly smaller than on Dec. 30 when the pervious thermal map was made. As of Wednesday (Jan. 6), the lake was perched at least 1-2 m (1-2 yds) above its narrow edges; overflows onto the narrow edge slowly elevated a low wall around the lake similar to the wall around an above-ground swimming pool.

The main island of cooler, solidified lava floating in the lava lake continued rotating counter-clockwise, in front of the west lava source filling the lake, while the 11 smaller islands moved a bit but remained in the east end of the lake; at 10:30 pm last night, the island stalled in rotation and movement. The dimensions of the main island remained the same: about 250 m (820 ft) in length, 135 m (440 ft) in width, and about 3 ha (7 acres) in area based on the Jan. 5 thermal map. Measurements Friday afternoon (Jan. 1) showed that the island’s edges were about 6 m (20 ft) above the lake surface. Monday afternoon, (Jan. 4), the island was measured as 7-8 m (8-9 yds) higher above the lake surface.