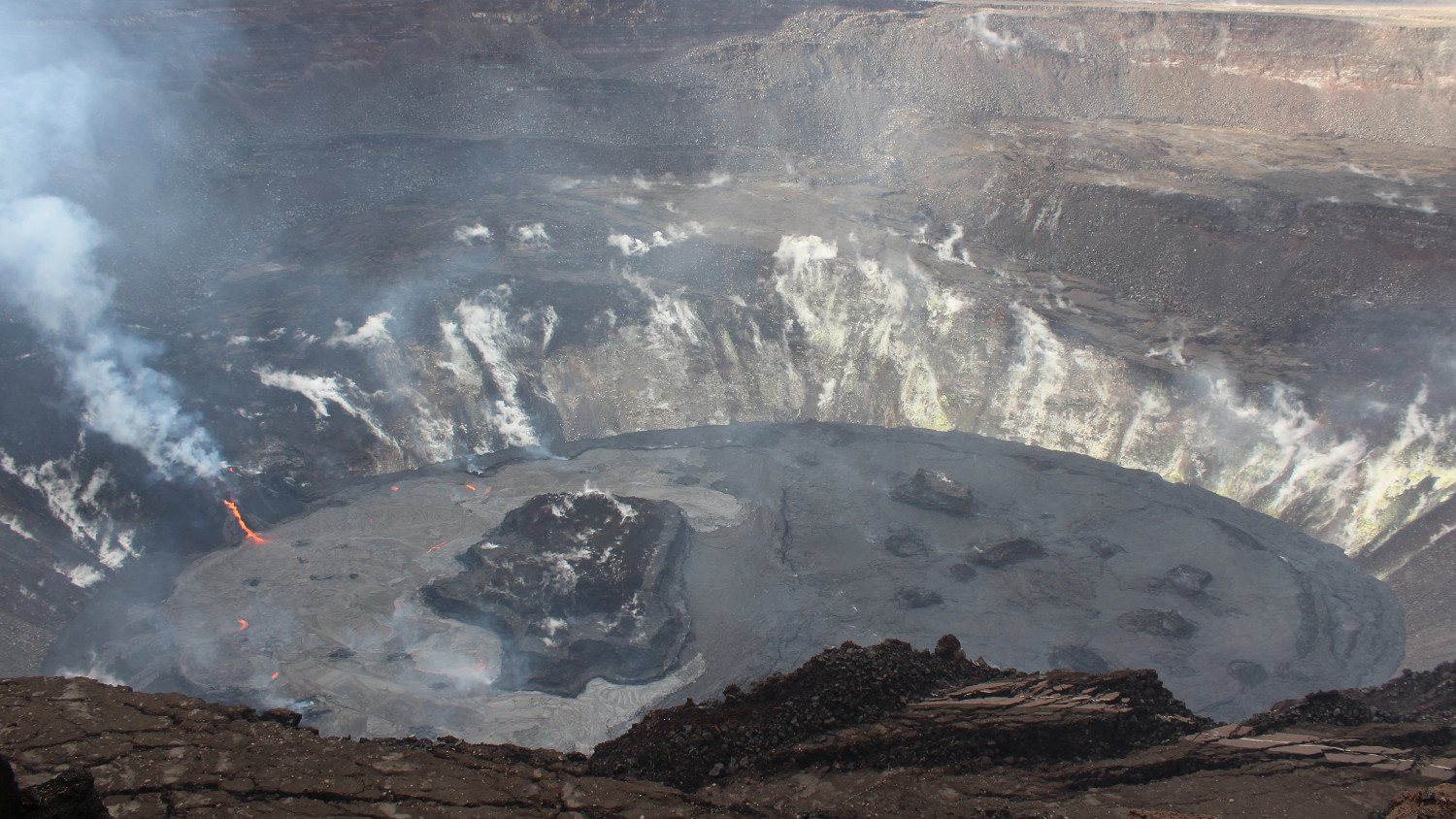 HVO scientists observed the Halema‘uma‘u lava lake from the southern crater rim in the late afternoon on Tuesday. In this view, the active western fissure at Kīlauea's summit is visible to the left. The circulating western portion (left) of the lava lake has a more silvery color than the stagnant eastern portion (right). Several of the islands in the lake, including the largest one, are seen here. USGS photo by M. Zoeller.

HAWAIʻI VOLCANOES NATIONAL PARK - This week, scientists remained that "words matter in volcanology just as in the rest of society." 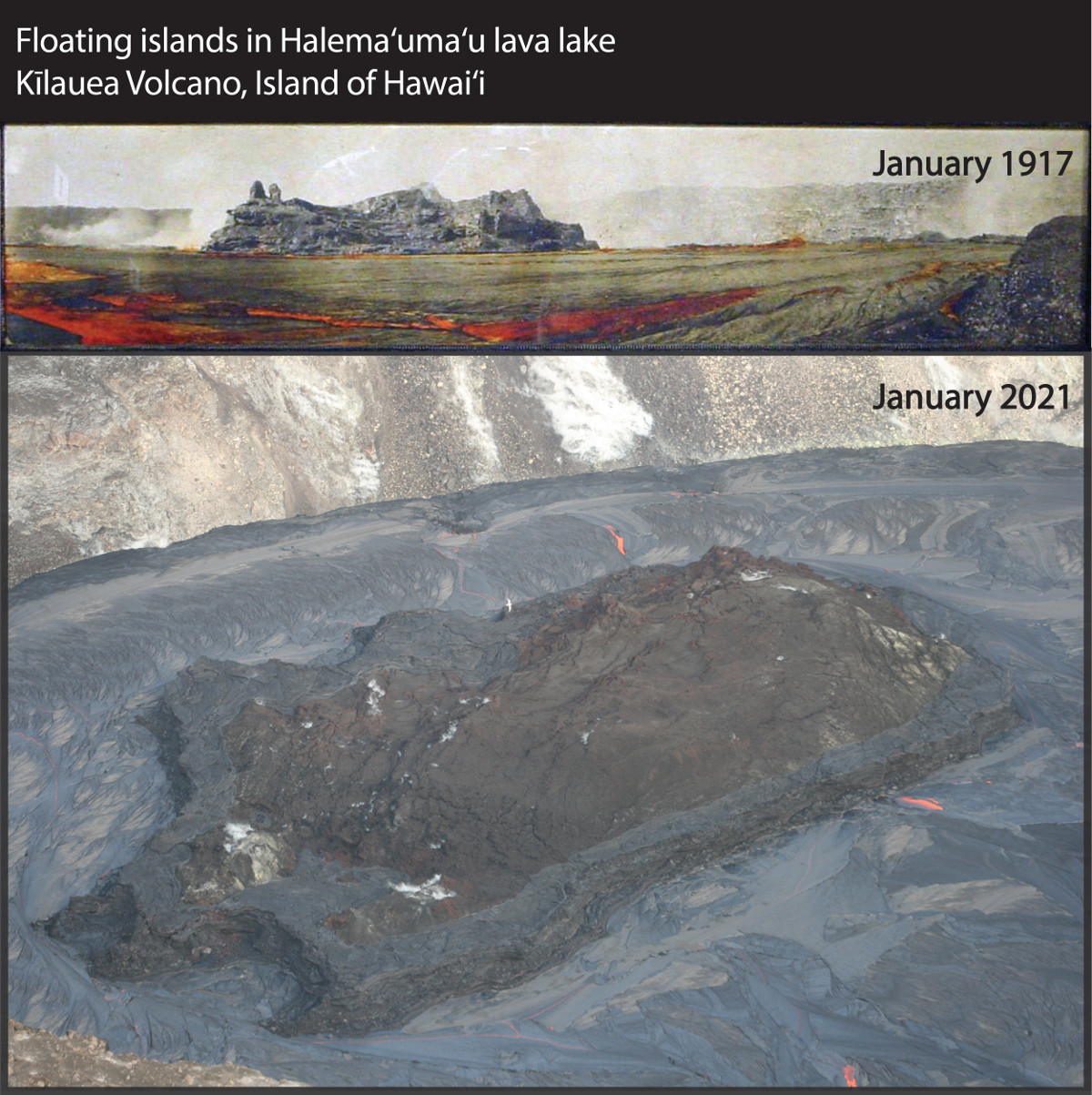 Islands have been observed in Kīlauea lava lakes for more than 100 years—some move and some are moored. These two photographs of Halemaʻumaʻu crater from 1917 (top) and 2021 (bottom) show islands floating in lava lakes. The 1917 photographic panorama was taken from the edge of the lava lake, which was only about 30 m (100 ft) below crater rim and Kīlauea caldera floor. At the time, the island rose about 20 m (65 ft) up from the surface and was 100 m (330 ft) wide in the direction depicted. This photograph accompanies a painting of the same feature in Volcano Art at Hawaiʻi Volcanoes National Park—A Science Perspective. 2020 photograph by K. Mulliken.

From this week’s article by the U.S. Geological Survey Hawaiian Volcano Observatory scientists and affiliates:

Words matter in volcanology just as in the rest of society. Words matter among volcanologists themselves, of course, but they particularly matter in our dealings with the public, when we attempt to both tell what is happening and educate about how volcanoes work. Accuracy of words promotes understanding and clarity of thought and is essential to both telling and educating.

Many terms we use today reflect the ancient misunderstandings. Igneous, a scientific term used for one of the three broad families of rocks (sedimentary and metamorphic are the other two) derives from the Latin word for fire, ignis. Volcano comes from Vulcan. Fire produces ash, scoria, and cinder, but all three terms are used by volcanologists for particles erupted from volcanoes that have nothing to do with fire. These old words are a bit quaint and even charming, but their long-term usage makes them permissible among volcanologists.

All this is fine. Words have to derive from something. A problem comes in, though, if scientists use fire terms as metaphors when dealing with the public. Perhaps the best, or worst, examples of misleading phrases are fire fountain, curtain of fire, and river of fire. Colorful metaphors, to be sure, but just plain wrong. Fire neither fountains nor flows nor forms curtains. Sadly, fire fountain and curtain of fire are terms still used by some volcanologists, though they are slipping away. Lava fountain, line or row of lava fountains, and river of lava, respectively, are the preferred terms in discussion with the public as well as among ourselves.

Fire makes smoke. Volcanoes don’t burn, so they don’t smoke. Instead, fume or gas rises above them. This is an easy distinction to make in Hawaiʻi, because residents are all too familiar with vog (volcanic air pollution), which smells nothing like smoke. Of course, heat from volcanoes can set fires that smoke, and flames from hot gas burning in air can sometimes decorate vents.

Fiery is a word that is often applied to a volcanic scene. It means “consisting of fire or burning strongly and brightly” and so is inappropriately used for an eruption. This word is so widely used, however, that volcanologists are unlikely to win the semantic argument.

Other examples of questionable word usage for volcanoes do not involve the fire metaphor. What happens when some things just don’t have a word to accurately describe them? Do we stretch the meaning of an existing word or come up with something new?

Examples of this problem are the masses of solid material floating in the current lava lake in Halemaʻumaʻu at Kīlauea’s summit. These things moved slowly around in the lake and rose as the lake deepened. The masses are therefore not islands, which are stationary relative to their surroundings. USGS Hawaiian Volcano Observatory (HVO) volcanologists 100 years ago used the phrase ‘floating islands’ for such features, an expressive but inaccurate phrase.

HVO used the word “island” to describe these drifting masses in Halema‘uma‘u’s current lava lake, though raft may be a better term to acknowledge their mobility. A raft, however, is usually perceived as a floating mass having a shallow draft, but for various reasons we suspect (admittedly with little confidence) that the largest current island/raft has a relatively deep draft reflecting a sluggish foundation.

A colleague at the Smithsonian Institution suggested, only half in jest, that the floating masses be termed ‘basalt bergs’ by analogy with ice bergs, which are mostly submerged. Floating islands, rafts, basalt bergs, or something else—only time will tell what name finally sticks.

In Lewis Carroll’s ‘Through the Looking Glass,’ Humpty Dumpty tells Alice scornfully “When I use a word…it means just what I choose it to mean—neither more nor less.” Laudable, as long as he chooses the right meaning! That is the problem we volcanologists face when telling and educating the public: how to choose the right word with the right meaning and do it accurately. In this sense, as in so many others, words matter.