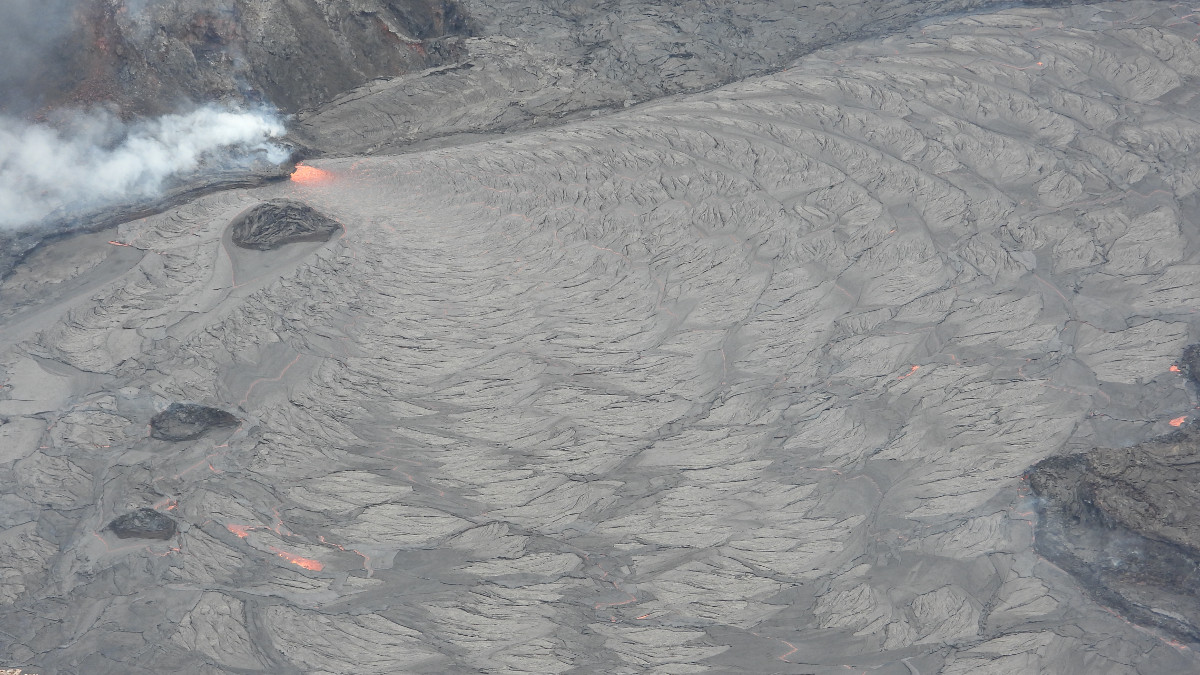 Active surface lava has been limited to the western portion of the lava lake in Halema‘uma‘u crater, at the summit of Kīlauea. This photo shows a large portion of this western zone. The surface is composed of a patchwork of small, angular crustal plates separated by darker spreading zones. USGS photo taken by M. Patrick on February 17, 2021.

HAWAIʻI VOLCANOES NATIONAL PARK - Kīlauea Volcano has now been erupting for two months. Activity is still confined to Halemaʻumaʻu, with lava erupting from a vent on the northwest side of the crater. 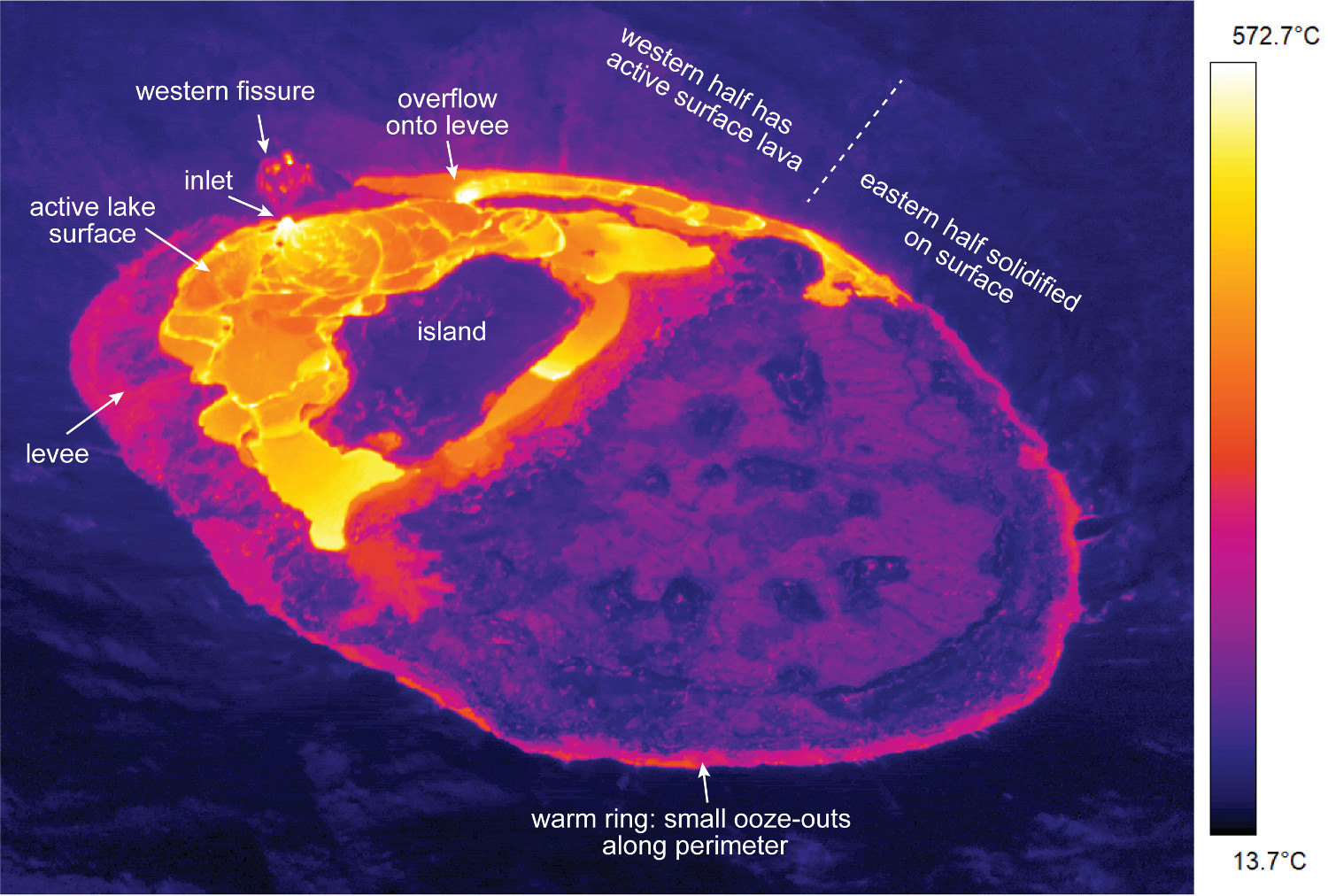 This thermal image taken during the February 1 helicopter overflight shows the features of the lava lake in Halema‘uma‘u, at the summit of Kīlauea. The eastern half of the lake is solidified at the surface, with active surface lava mostly limited to the western half. Nevertheless, small ooze-outs of lava occasionally appear along the eastern lake perimeter. The western lake is perched several meters above its base, impounded by a levee of solidified lava. Lava erupts at the western fissure and enters the lake at a small inlet site, where a narrow stream of lava pours in. During the overflight, a large overflow breached the northern levee and flowed along the northern lake margin towards the east. The temperature scale is in degrees Celsius. USGS image by M. Patrick.

Kīlauea’s current lava lake formed on December 20th and rose rapidly within Halema‘uma‘u crater during the dynamic first week of the ongoing summit eruption. Near the end of December, the eruption stabilized and the lava lake has been slowly changing since then.

The vent on the north wall of Halema‘uma‘u shutdown about one week into the eruption and a narrow ledge of lava began to solidify around the perimeter of the lava lake. As the days went by, it became clear that a “perched” lava lake was beginning to form.

Lava lakes become perched as crust that solidifies around the lake perimeter, along with the accumulation of surface crust at the lake margin, is frequently resurfaced by small lava overflows. These overflows build up a levee that surrounds the lava lake. As the lake level rises, overflows continue to resurface and heighten the levee. Perched lava lakes have been common at Kīlauea over the past 200 years.

A “permanent” crust began forming on the eastern surface of the lava lake in mid-January. The large island that had spent the previous month drifting about the lava lake became locked in place with a dozen or so smaller islands, trapped by the cooling crust. In an odd twist, the solidified crust contains bubbles and is more buoyant than the molten lava, which continues to degas and become increasingly heavier.

As lava continued to erupt from the west vent, the active western portion of the lava lake built up perched levees above the stagnant eastern surface crust. The active lava lake remains perched above its base by several meters or yards.

The crust on the eastern portion of the lava lake has remained solidified for about a month now, but it continues to rise within the crater. How is this possible? The main mechanism driving the rise of the crust is active lava from the perched lake seeping down underneath the solidified crust to force it upward.

As the eastern crust rises, lava squeezes up in areas between the solidified crust and the crater walls, forming small ooze-outs around the perimeter of the lake. These ooze-outs are evidence that this “apparently solid” ground is a thin crust lying on top of molten lava.

The rise of the lava lake has been interrupted by several plateaus, and even drops, in level over the past few weeks. These have been recorded by a USGS Hawaiian Volcano Observatory (HVO) continuous laser rangefinder—which records the level of a fixed area of the active lava lake surface. How is a drop in lava lake level possible while the vent continues to erupt lava into the lake?

There are several factors that can contribute to the leveling off, or even decrease, in the lava lake level. First, the lava level mirrors the summit tilt closely. As the summit magma reservoir decreases in pressure (deflation) there is typically a lower effusion rate—or less lava entering the lava lake. When the supply rate is down, ongoing processes that cause the active lava surface to drop become more apparent.

Smaller short-term drops in lava level could be due, in part, to minor collapses of the perched levee walls allowing some of the lava to drain down into an area of lower elevation. Another process mentioned earlier, is lava seeping below the eastern, solidified crust to promote uplift of the stagnant lava surface.

Volcanic gases also play a large role in these processes. Most gas is released when the gas-rich lava is first erupted in Halema‘uma‘u, though some remains in the lava as bubbles. Over time, some of those bubbles slowly escape from the lava lake, and the lake level may drop in response—like foam being compressed.

Despite occasional drops in the lava lake level, the overall trend of the lava level is rising. Most recent lava level measurements were about 217 m (712 ft) on February 18. This level is still approximately 45 m (148 ft) below where the lava is expected to be visible from Kīlauea Overlook within Hawai‘i Volcanoes National Park.

Similar lava lake behaviors were also reported at Kīlauea during the 1800s and 1900s. As HVO scientists continue to closely monitor Kīlauea’s ongoing summit eruption with modern equipment, we learn more about how these processes work and develop a better understanding of past and potential future eruptions.