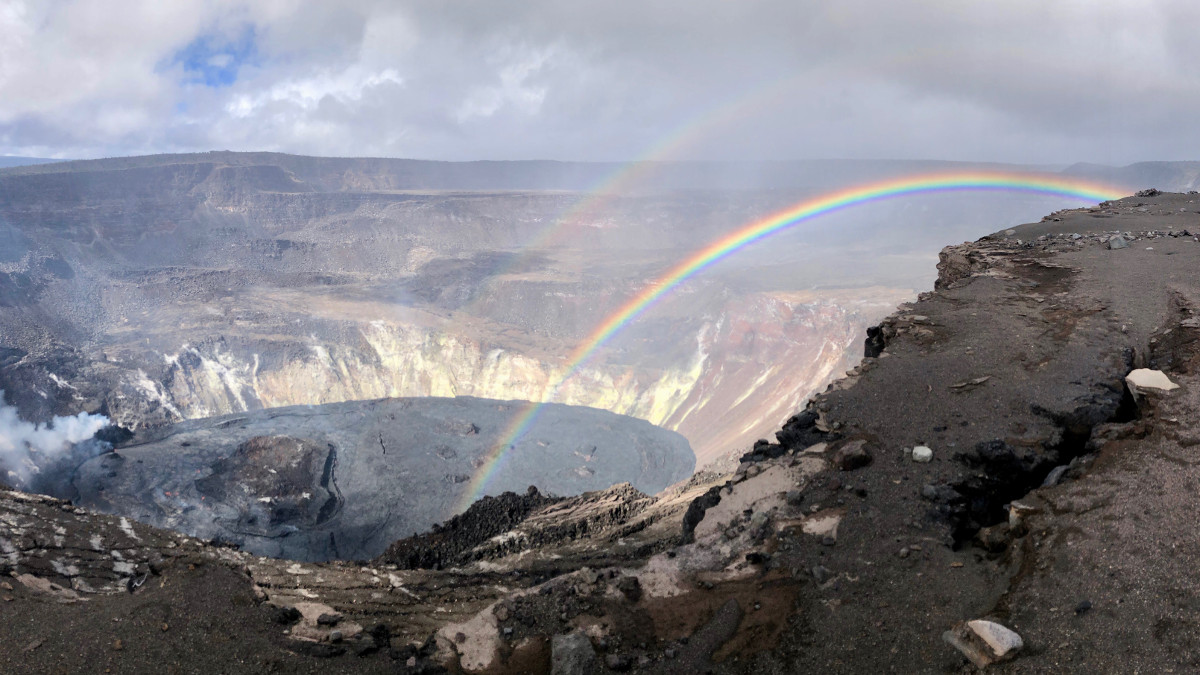 USGS PHOTO: "A pot of lava at the end of the rainbow? A rainbow formed over Halema‘uma‘u crater following an afternoon rain shower on February 22. Rainbows are often observed over Halema‘uma‘u, as mist and rain move across the caldera. This photo was taken from within an area of Hawai‘i Volcanoes National Park that remains closed to the public for safety reasons."

HAWAIʻI VOLCANOES NATIONAL PARK - Sulfur dioxide emission rates are down and lava effusion at the western fissure are weaker and slower, scientists say. 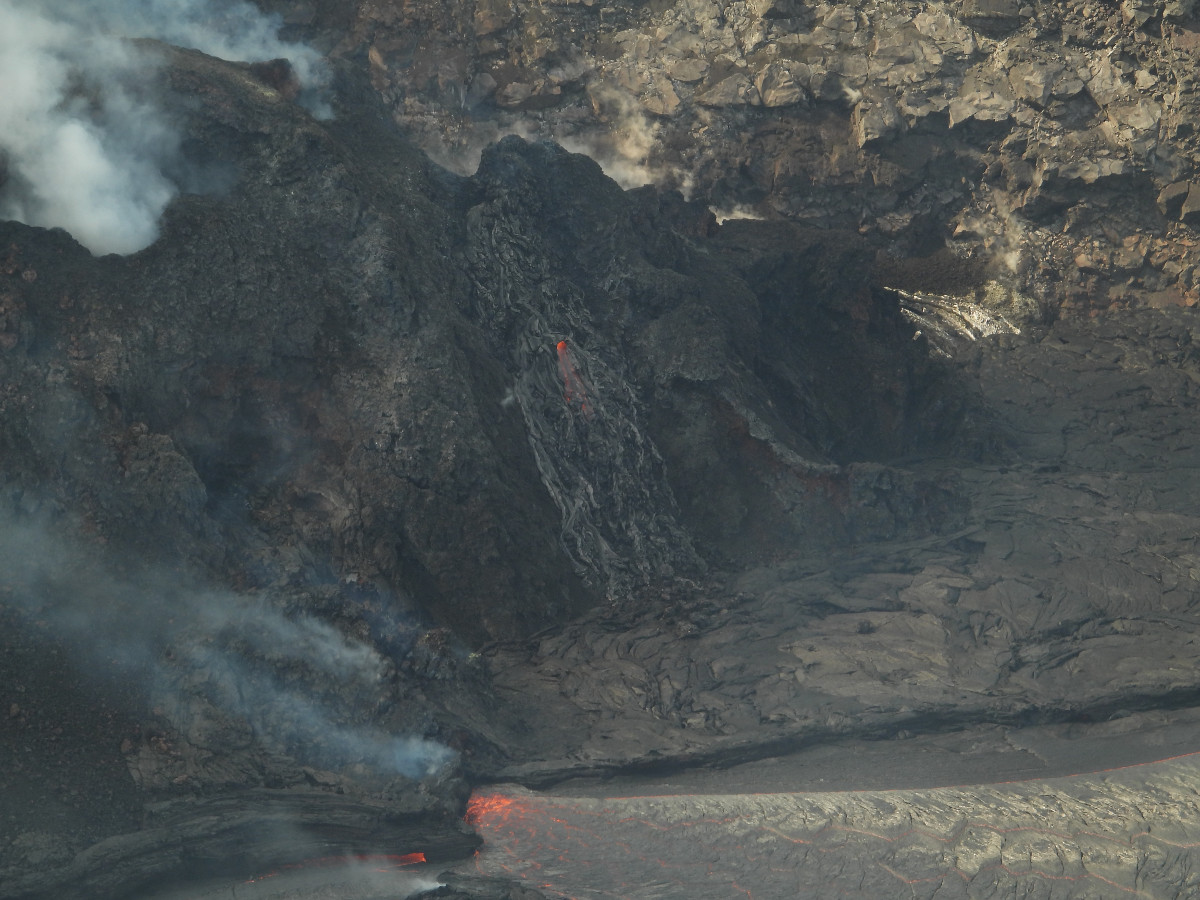 (BIVN) – Kīlauea Volcano continues to erupt at the summit area within Halemaʻumaʻu, although the vigor of the activity continues to decrease.

Observations made by the USGS Hawaiian Volcano Observatory Monday afternoon “indicated lava effusion continues at the western fissure, but is weaker and slower. The lava rapidly develops a thin crust while flowing outwards towards the east with occasional crustal foundering between the vent and main island, but not beyond the island. A thin surface crust has started forming around 3 small pieces of the spatter cone that have been in the lake and are very close to the vent.”

The solidified lake crust that covers the stagnant, eastern half of the lake and is slowly growing westward around the main island. The active portion of the lake was reported to be 216 m (712 ft) deep as of Tuesday morning.

The most recent sulfur dioxide emission rate measurements were the lowest since the current eruption began in December. HVO says that on February 22, rates were at about 600 t/d and continue to gradually drop. This rate is lower than the emission rates from the pre-2018 lava lake, which were around 5,000 t/d.

We will update this story with Wednesday’s update when it is posted by USGS. 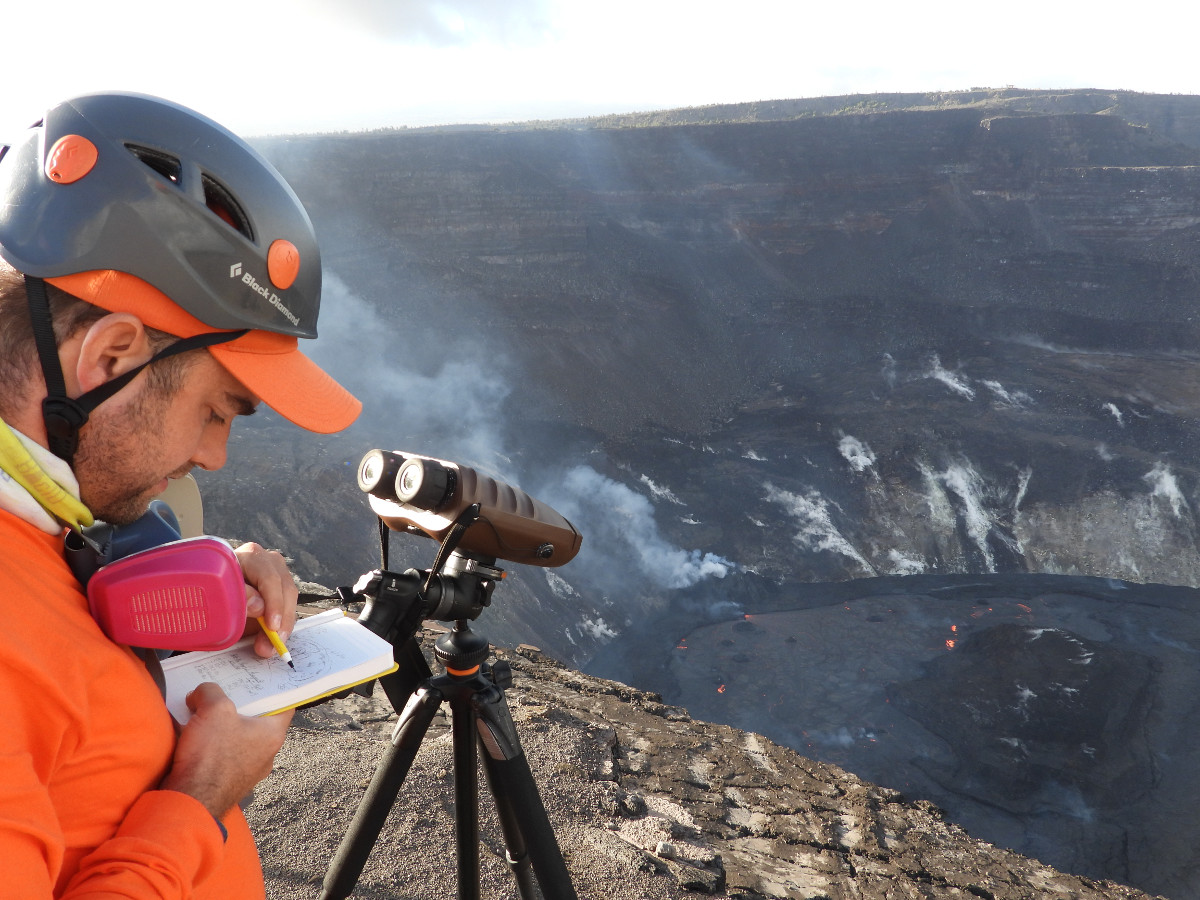 An HVO geologist uses a sketch in their fieldbook to note the location of laser rangefinder measurements of the lava lake in Halema‘uma‘u crater, at the summit of Kīlauea. Using the laser rangefinder, HVO geologists can derive the elevation of various spots on the lava lake surface, and are able to track how the elevation of features within the lava lake change over time. Field measurements on February 22 indicated that the lava in the western (active) portion of the lake in Halema‘uma‘u has filled 216 m (712 ft) of the crater. USGS photo by M. Patrick.

UPDATE – (11:30 a.m.) – From the USGS Hawaiian Volcano Observatory on Wednesday:

Activity Summary: Kīlauea Volcano is erupting. Lava activity is confined to Halemaʻumaʻu with lava erupting from a vent on the northwest side of the crater. Field measurements as of February 23 indicate the lava in the western (active) portion of the lake in Halema‘uma‘u is 215 m (708 ft) deep. Webcams show intermittent crustal foundering. The eastern portion of the lava lake has a stagnant and solidified surface crust. SO2 emission rates remain elevated; measurements on February 23 were 800 t/day.

Summit Observations: The most recent sulfur dioxide emission rate measurements from February 23 are about 800 t/d — this rate is lower than the emission rates from the pre-2018 lava lake (around 5,000 t/d). The summit tiltmeters show the inflationary trend of the recent DI event started after midnight on the morning of February 23. Seismicity remains stable, with elevated tremor and two minor earthquakes.

East Rift Zone Observations: Geodetic monitors indicate that the upper portion of the East Rift Zone (between the summit and Puʻu ʻŌʻō) contracted while the summit deflated at the onset of this eruption, but is currently stable. There is no seismic or deformation data to indicate that additional magma is currently moving into either of Kīlauea’s rift zones. SO2 and H2S emissions from Puʻu ʻŌʻō were below instrumental detection levels when measured on January 7.

The active western half of the lava lake was approximately 215 m (708 ft) deep as measured by field crews in the afternoon of February 23, 2021. The decrease in lava lake depth coincides with the recent deflationary part of a DI event.

Observations yesterday afternoon indicated lava effusion continues at the western fissure. The lava rapidly develops a thin crust while flowing outwards towards the east with occasional crustal foundering between the vent and main island, but not beyond the island. A thin surface crust has started forming small pieces of the spatter cone that have been in the lake and are very close to the vent.

Stagnant (i.e. solidified) lake crust covers the eastern half of the lake and is slowly growing westward around the main island. The position and dimensions of the main island and smaller islands have not changed due to the solidified crust. Some minor talus debris is accumulating on the lava surface around one or two of the islands as their edges cool, crack, and begin to crumble.