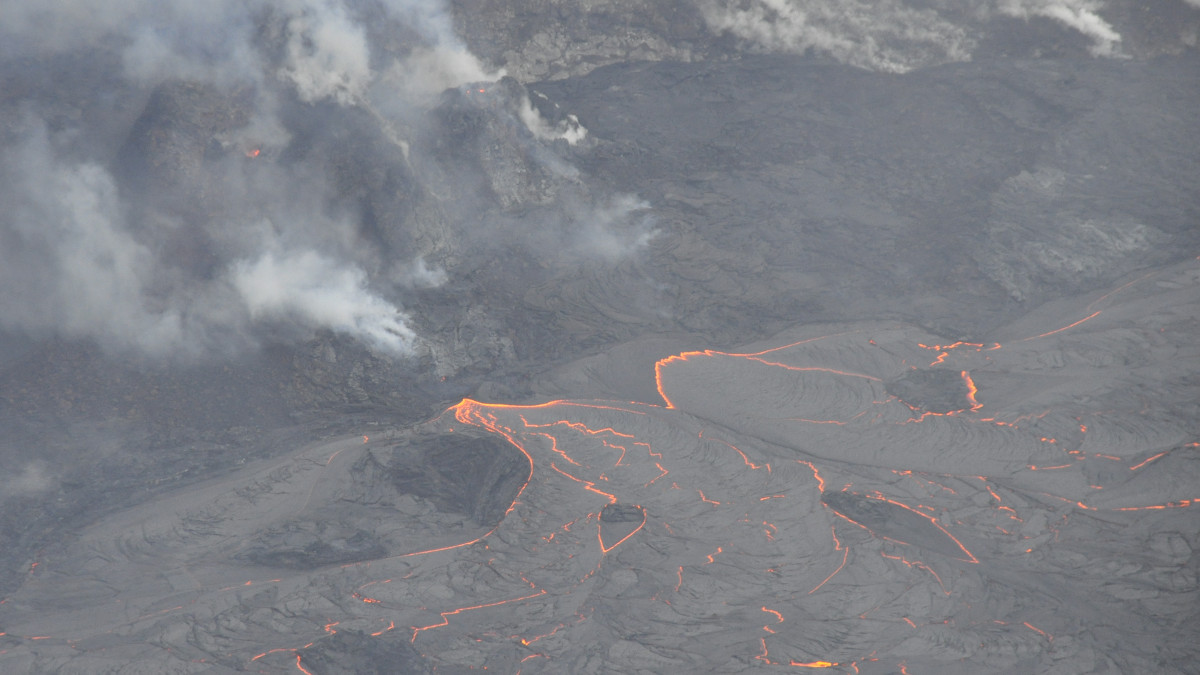 HAWAIʻI VOLCANOES NATIONAL PARK - Laser rangefinder measurements taken on March 14 indicated that the total depth of the lava lake at HAlemaʻumaʻu is 725 feet. 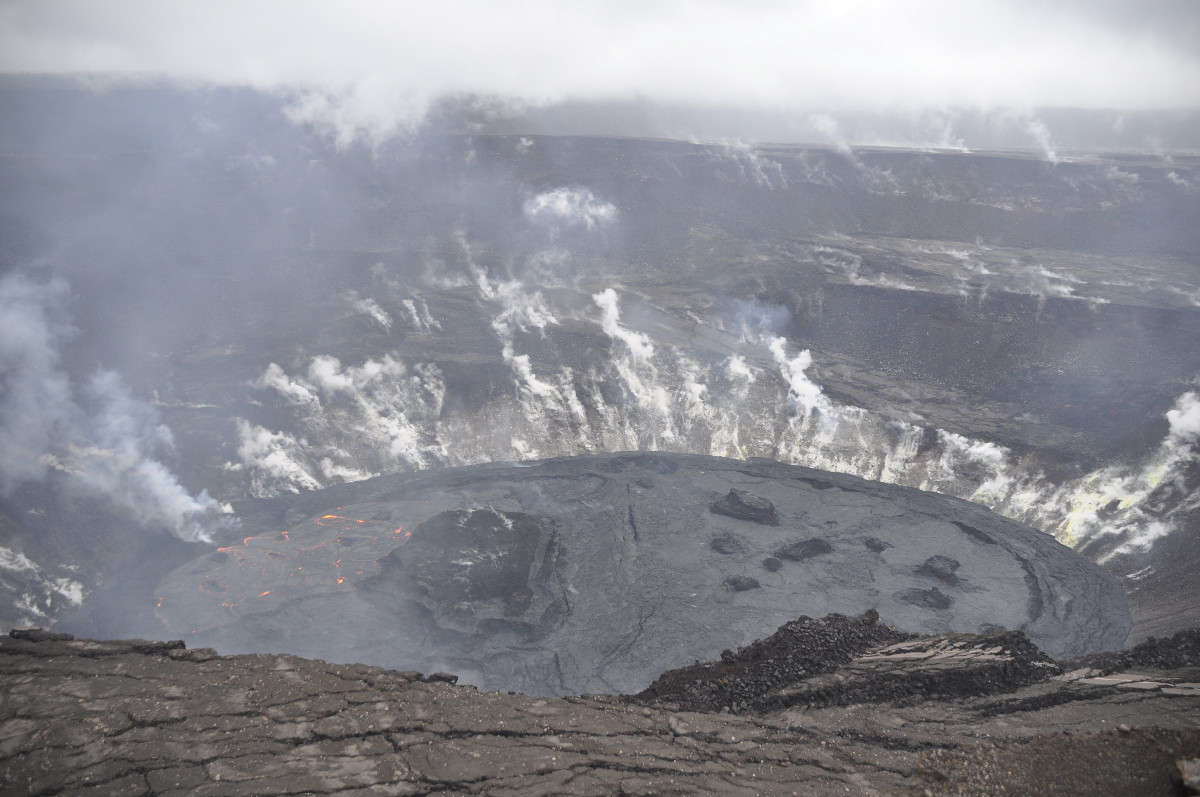 View of the lava lake from the southern rim of Halema‘uma‘u, at the summit of Kīlauea, looking north. The western portion of the lava lake remains active, with small scale crustal foundering events. The white steam from the crater walls is more pronounced due to the heavy rain of the last couple of days. The volcanic gas plume from the western fissure area, visible in the west (left), has a slight blue tinge due to sulfur gases. USGS photo taken by N. Deligne on March 11, 2021.

Activity Summary: Kīlauea Volcano is erupting. Lava activity is confined to Halemaʻumaʻu, with lava erupting from a vent on the northwest side of the crater and flowing into a growing lava lake. Laser rangefinder measurements this morning, March 14, indicate that the total depth of the lava lake is 221 m (725 ft). SO2 emission rates remain elevated; a measurement on March 7 was 800 t/day.

Summit Observations: The most recent sulfur dioxide emission rate, measured on March 7, is 800 t/d; this is elevated compared to rates in the months before the eruption started on December 20 (less than 100 t/day), but lower than rates from the pre-2018 lava lake (around 5,000 t/day). Summit tiltmeters tracked deflationary tilt yesterday until late in the evening when inflationary tilt resumed. Inflationary tilt continues this morning as part of an apparent deflation-inflation (DI) event. Seismicity remains stable, with elevated tremor compared to observations before the eruption.

East Rift Zone Observations: Geodetic monitors indicate that the summit and upper portion of the East Rift Zone—between the summit and Puʻu ʻŌʻō—have stabilized after contracting by several centimeters in the early days of the ongoing eruption. SO2 and H2S emissions from Puʻu ʻŌʻō were below instrumental detection levels when measured on January 7.

Halemaʻumaʻu lava lake Observations: Lava effusion from the west vent continues to supply the lava lake within Halema‘uma‘u crater. The main section of the west vent is consistently effusing lava through a crusted-over channel and submerged inlet to the lake.

The northeast section of the west vent, just several meters (yards) away, fed another lava flow starting March 5. After the collapse of a lava pond near the west vent on March 7, this flow stabilized into a second semi-steady inlet to the lava lake. Over the past several days the flow has crusted over and now feeds a steady submerged inlet to the lava lake, which persists as of this update.

Lava circulation and intermittent foundering of thin crust continue in the active western portion of the lava lake. The total depth of the lake is approximately 221 m (725 ft) as measured by a continuous laser rangefinder this morning.

Hazard Analysis: High levels of volcanic gas, rockfalls, explosions, and volcanic glass particles are the primary hazards of concern regarding this new activity at the summit of Kīlauea. Large amounts of volcanic gas—primarily water vapor (H2O), carbon dioxide (CO2), and sulfur dioxide (SO2)—are continuously released during eruptions at Kīlauea Volcano. As SO2 is released from the summit during this new eruption, it will react in the atmosphere with oxygen, sunlight, moisture, and other gases and particles, and within hours to days, convert to fine particles. The particles scatter sunlight and cause the visible haze that has been observed downwind of Kīlauea, known as vog (volcanic smog), during previous summit eruptions. Vog creates the potential for airborne health hazards to residents and visitors, damages agricultural crops and other plants, and affects livestock operations. Rockfalls and minor explosions, such as the ones that occurred during the 2008–2018 lava lake eruption at the Kīlauea summit, may occur suddenly and without warning. This underscores the extremely hazardous nature of the Kīlauea caldera rim surrounding Halemaʻumaʻu crater, an area that has been closed to the public since late 2007. Pele’s hair and other lightweight volcanic glass fragments from the lava fountains within Halemaʻumaʻu will fall downwind of the fissure vents and lava lake, dusting the ground within a few hundred meters (yards) of the vent. High winds may waft lighter particles to greater distances. Residents are urged to minimize exposure to these volcanic particles, which can cause skin and eye irritation similar to volcanic ash.