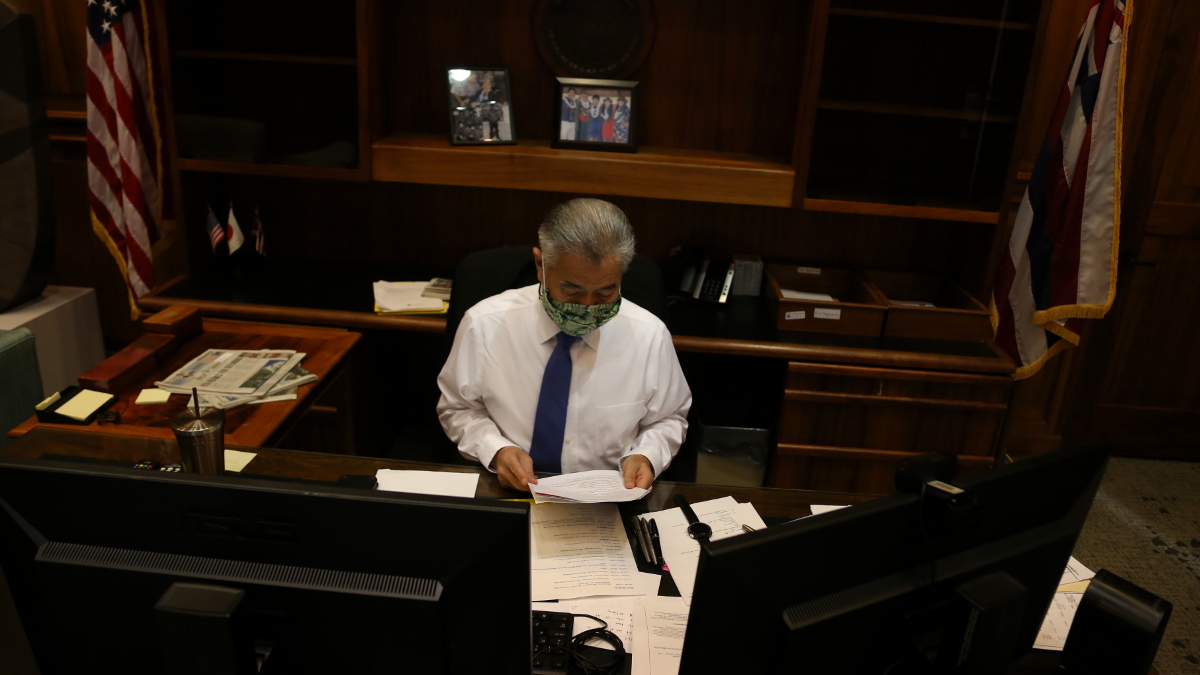 (BIVN) – Hawaiʻi Governor David Ige has been given the Lava Tube award for 2020. The annual dishonor – decided by the Big Island Press Club – is awarded to a government individual or entity “for a lack of communication and keeping the public in the dark.”

At the same time, the Press Club awarded its annual meritorious Torch of Light Award to James Hustace and the Waimea Community Association. The Torch of Light is given to a person or organization “for brightening the public’s right to know.”

The awards are announced yearly on March 16, Freedom of Information Day – the birthday of James Madison, who was widely regarded as the father of the U.S. Constitution and the leading advocate of openness in government, the press club says.

The following explanation was provided in a press club news release:

BIPC has selected James Hustace and the Waimea Community Association where Hustace currently serves as president as its Torch of Light awardee this year for keeping the islandwide community informed during a pandemic and an election year.

Fine-tuning that virtual event, in May, over a period of three days, the community association hosted three candidate forums that included all of the mayoral primary candidates. Becoming the gold standard for how Zoom meetings were rebroadcast over Facebook on the Big Island, these well-attended virtual forums included informing viewers of how they could participate in the primary and election process. The Waimea Community Association added additional live streaming content over the year, connecting constituents with campaigners and elected officials islandwide well beyond the borders of Waimea.

Hustace led the technological charge at the community association to bring these virtual events to life. Other entities, including the Big Island Press Club, applied the learning gained from these early webcasts to produce other pandemic-friendly programming such as BIPC’s mayoral debate, which aired on YouTube and Facebook in addition to a live radio broadcast.

On March 16, 2020, Gov. David Ige imposed what Civil Beat called “one of the most extreme anti-transparency measures executed in the U.S.” when he suspended Chapter 92F, HRS, the Uniform Information Practices Act in a supplementary proclamation signed that day.

The Big Island Press Club understands that some government services had to be delayed in the early stages of reacting to a pandemic. But in the ensuing year, this ban on public records access has been only partially lifted, despite urgent calls to lift it by media, journalism groups and members of the state Legislature.

The Big Island Press Club believes the ability of one branch of government to unilaterally slam the door on access by the public to their own public records is something that should be taken seriously.

The press club’s Vice President, Michael Phillips, said, “We applaud our state senator from Kona, Dru Kanuha, for sponsoring a bill prohibiting such gubernatorial action in the future and note that his bill, SB 134, has cleared the upper chamber and was sent to the state House.”

As part of its mission statement, the Big Island Press Club believes public records belong to the people, not the government.

“The hunger for fact-based information is never more intense than during an emergency, and when that information is hard to come by, people often resort to rumors and speculation, “ added Lauer. “One would think that’s the last thing the government would want in a declared emergency.”

Big Island Video News owner David Corrigan is a member of the Big Island Press Club, but had no input into the process of selecting the 2020 awardees.