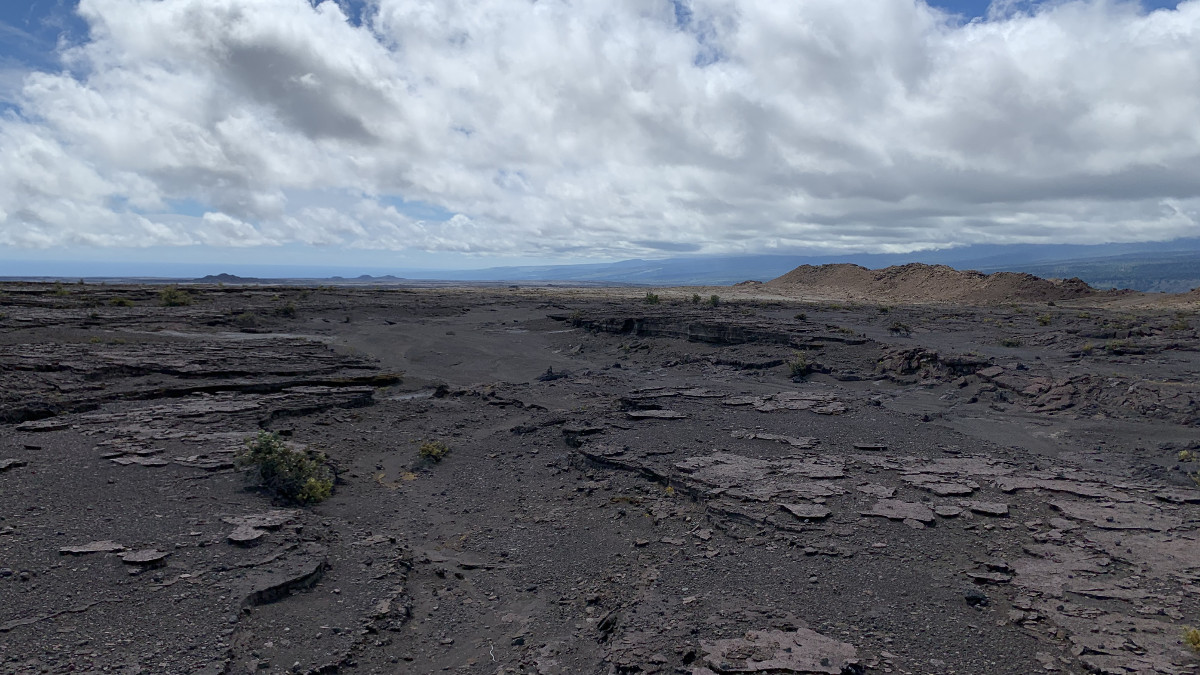 View looking southwest along the Southwest Rift Zone of Kīlauea Volcano. The unvegetated nature of the Southwest Rift Zone is on full display with the Keanakākoʻi Tephra in the foreground overlying lava flows from Cone Peak (the cone in the middle ground to the right). In the distant background are the cones of Puʻukoaʻe (left of center) and the Kamakaiʻa Hills (three hills in center). USGS photograph taken by Hawaiian Volcano Observatory geologist D. Downs on October 22, 2020.

It is no secret that the Island of Hawaiʻi is home to fantastic volcanic features, many of which have been created during eruptions of Kīlauea, Mauna Loa, and Hualalai since 1800.

Kīlauea’s East Rift Zone has been particularly newsworthy over the past 40 years with Puʻuʻōʻō erupting nearly continuously from 1983 to 2018 followed by the 2018 eruption that started in Leilani Estates. The summit of Kīlauea also saw eruptions in April and September of 1982 and the 2008–2018 lava lake which drained and was followed by impressive collapses from May–September 2018. The newly enlarged Halemaʻumaʻu Crater is currently filling with lava from an eruption that began in December of 2020. The frequent summit and East Rift Zone eruptions often seem to overshadow Kīlauea’s Southwest Rift Zone, which extends southwest from Halemaʻumaʻu to the coast about 5 km (3 mi) southeast of Pāhala.

The Southwest Rift Zone of Kīlauea is almost entirely located within Hawaiʻi Volcanoes National Park and hosts its own remarkable volcanic landforms, such as the Great Crack, the Kamakaiʻa Hills, and Puʻukoaʻe. In contrast to the heavily forested East Rift Zone, much of the Southwest Rift Zone lies downwind of Halemaʻumaʻu in the Kaʻū Desert, which consists of sparse vegetation near the summit and scattered grasslands closer to the coast. It is also less visited than other parts of Kīlauea due to a lack of roads and only a few hiking trails. The Southwest Rift Zone’s sparse vegetation has given geologists of the USGS Hawaiian Volcano Observatory a much clearer picture of the recent volcanic eruptions, particularly from around 1500 to the present.

Contributing to the unique appearance of the Southwest Rift Zone, especially near the summit of Kīlauea, are the wind swept, sandy, boulder-strewn explosive deposits, which blanket older lava flows. These are the deposits of explosive eruptions known as the Keanakākoʻi Tephra from the summit of Kīlauea that began around 1500 and continued until the early 19th century. One of the more historically important eruptions in Hawaiian history is the set of eruptions that occurred in 1790. This eruption resulted in the deaths of several hundred people traveling through the region, some of whose footprints are preserved in one of the ash deposits.

The Keanakākoʻi Tephra provides a useful marker in the Southwest Rift Zone to help constrain the ages of lava flows. Some of these eruptions have been documented and witnessed, whereas others have more recently been recognized as young eruptions through the diligent mapping of geologists.

The first written account of eruptive activity in the Southwest Rift Zone was by Reverend William Ellis (1794–1872). In 1823, he and his party were traveling to the summit of Kīlauea and encountered the aftermath of the 1823 Keaīwa lava flow, which erupted from a fissure now associated with the Great Crack. It is now known that the Southwest Rift Zone was particularly active between the explosive eruption of 1790 and lava flow of 1823, including eruptions from the Kamakaiʻa Hills and Kealaʻalea Hills. Previous Volcano Watch articles provide more details on some of these early 19th century lava flows: “Re-thinking Kīlauea Volcano’s early known eruptive history” and “Kamakaiʻa Hills: what are they and why are they there?”

Some of the more recent eruptions in the Southwest Rift Zone observed during the 19th and 20th centuries were those in 1868, 1919–1920, 1971, and 1974. These range from relatively small volume eruptions that lasted a few days or less, such as the eruption of 1868, to the more voluminous eruption of Mauna Iki that lasted for 8 months in 1919–1920. The last Southwest Rift Zone eruption was the short-lived December 1974 event in which lava flowed more than 11 km (7 mi) from a series of fissure vents that opened a few miles south of Halemaʻumaʻu. In April 2015, an increase in magma supply to Kīlauea’s summit reservoir resulted in a shallow intrusion into the south caldera. Although a Southwest Rift Zone eruption did not occur, this reinforces the fact that magma can move into this region at any time.

There is still much to learn about the volcanic history of the Southwest Rift Zone, which will be the focus of a new HVO research project. Although it has been over 40 years since its last eruption, this visually stunning part of Kīlauea remains potentially active.