HAWAIʻI VOLCANOES NATIONAL PARK - The four-month eruption of Kilauea volcano on Hawaii island is ongoing, and scientists recently shared new video taken during a survey of the active summit region. 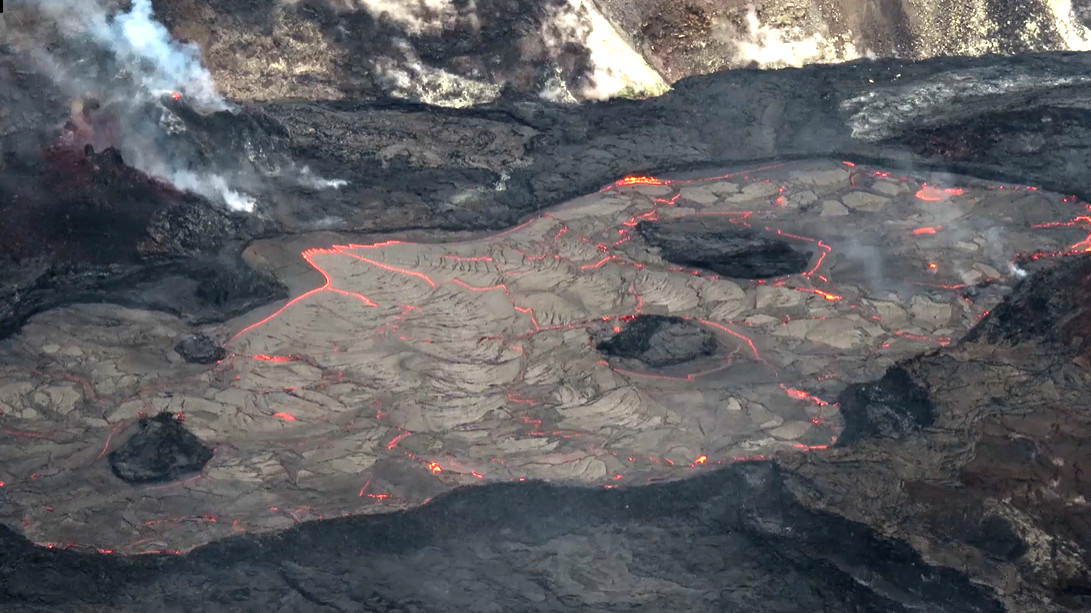 The 4 month eruption of Kilauea volcano on Hawaii island is ongoing, and scientist recently shared new video taken during a survey of the active summit region.

From the eastern rim of the crater, geologists with the Hawaiian Volcano Observatory captured these close views of the lava activity, which remains confined to the summit caldera.

Lava is still erupting from a vent on the northwest side of the crater, supplying a lava lake that continues to slowly grow deeper. The active fissure is building a spatter cone, that now stands approximately 15 meters, or 49 feet, above the lava lake surface.

A lava tube appears to wrap around the spatter cone, feeding the inlet to the lake.

This timelapse video shows how lava circulation and intermittent foundering of the crust continues in the western portion of the lava lake, with lava oozing out every so often along the perimeter.

The most recent sulfur dioxide emission rate, measured on April 14, was 950 t/d, which is elevated compared to rates in the months before the eruption started in December 2020.

Another time-lapse video, recorded far from the crater, shows a typical day for the summit plume, which is being carried to the southwest by the tradewinds.

Geologists also captured a view of the crater by helicopter. The imagery that was collected during the flight, was used to produce this thermal map. Active surface lava that is largely limited to the western side of the lake can be seen in red… the cooler, solidified portion of the lake is seen in blue. The stagnant portion of the lava lake is slowly growing westward.

Scientists say there is no unusual activity beyond the summit on the east rift zone. Monitors indicate that the summit and upper East Rift Zone is refilling with magma, at rates similar to those measured over the past two years.