A synthesized voice was utilized in the narration for this story. Video, images maps, and graphs are from the USGS Hawaiian Volcano Observatory.

HAWAIʻI ISLAND - Monitoring data streams show tiny changes - but no significant change in deformation rates or patterns that would indicate increased volcanic hazard at this time. 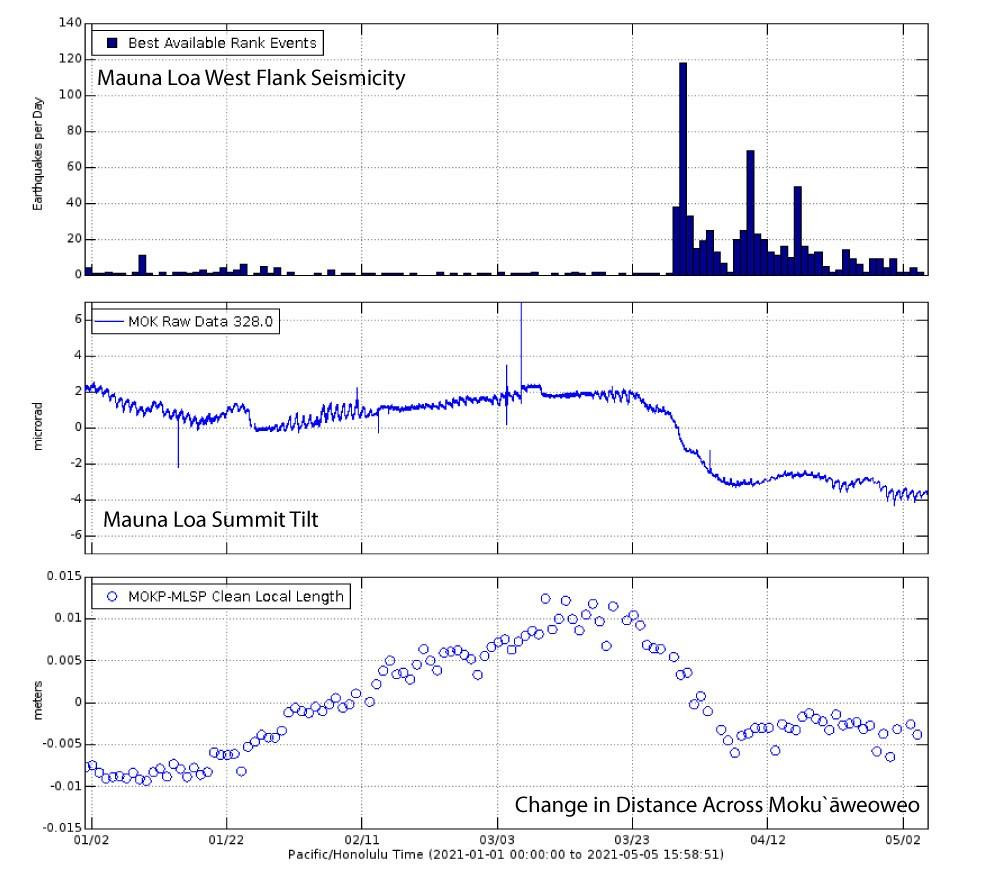 USGS: Data plots showing some of the features mentioned in this week’s “Volcano Watch” article. The top panel is a histogram of seismicity on Mauna Loa’s west flank, showing an increase in activity in that region over the past month. The middle panel is a tilt record from a tiltmeter near Mokuʻāweoweo, the change in trend from March 23 to April 5 is the first time a tilt change at Mauna Loa could be ascribed to volcanic changes. The bottom panel show the change in distance across the summit caldera, as measured by GPS. Lengthening of the line indicate expansion of the volcano, and decreases indicate contraction. USGS plots.

(BIVN) – Mauna Loa is not erupting, and scientists on Thursday reported low rates of deformation at the summit of the giant volcano over the past week.

Although Mauna Loa is Earth’s largest active volcano, it has lived in the shadow of Kīlauea since it last erupted in 1984. The geologic record shows that Mauna Loa erupts every seven years on average; however, 37 years have passed since lava flows from the volcano’s Northeast Rift Zone came within 7 km (4 miles) of Hilo.

Recent changes in deformation and seismicity on Mauna Loa are the latest in a series of “rumblings” that arguably began in 2004. At that time, Global Positioning System (GPS) instruments showed inflation of the volcano’s summit reservoir system accompanied by vey deep earthquakes. This behavior continued for several months before Mauna Loa returned to its background state. Summit inflation began again in 2014, this time together with shallow earthquakes, and has continued ever since, with only a short break in 2018.

In the past six months, there has been an uptick in earthquake activity on Mauna Loa’s west flank and changes in the pattern of deformation at its summit. These changes are small, sometimes barely above the noise, but may be telling us that the magma system is evolving in important ways.

Technology has changed a lot in the 37 years since Mauna Loa’s last eruption.

Today, HVO monitors Mauna Loa deformation using over 30 GPS stations, seven tiltmeters, and regularly analyzed satellite radar data. The higher rate of sampling and greater sensitivity of the instruments gives us the means to see much more detail. As we continue monitoring Mauna Loaʻs unrest, we also hope to learn much more about how the volcano behaves and look for clues to the next eruption.

Three observations from the past several months are particularly interesting (to a geophysicist).

The first is that the direction of deformation at Mauna Loa’s summit has had reversed twice since October 2020, switching back and forth from an outward (expansive) direction to an inward (contractional) one. The most recent contractional episode shortened the distance across Mauna Loa’s summit caldera (Mokuʻāweoweo) by only about 1.5 cm (0.6 inches). This is small compared to amount of expansion that has taken place, but the sudden reversal is new behavior that hasn’t been observed at Mauna Loa with modern instruments.

The third observation is the smallest but may be the most meaningful. Beginning on March 23, a tiltmeter near Mauna Loa’s summit recorded a change in tilt of about 5 microradians. It is not unusual to see this much tilt at Kīlauea, but there has never before been a tilt signal that could be attributed to changes in Mauna Loa’s volcanic system. Changes in tilt at Mauna Loa have been observed due to daily or seasonal temperature changes and because of rainfall, but never before due to volcanic deformation.

These new observations are interesting because they suggest some of the deformation is driven by shallower processes than we have seen in the past several years. Because this is the first time we’ve observed this level of detail, it is difficult to know what the data might indicate about the volcano’s future. Mauna Loa may become quiet again and return to background, like it did in 2005, or it may not.

Mauna Loa is currently at “advisory”, only the second out of four levels in the USGS Volcano Alert-Level System. We expect that there will be additional indicators, such as increased gas emissions and a sustained increase in seismicity, before any future eruption. These recent observations remind us that Mauna Loa is a restless volcano and they are part of why HVO encourages everyone to think about how a Mauna Loa eruption might affect them and plan accordingly.

Mauna Loa remains at Volcano Alert Level ADVISORY. The USGS Hawaiian Volcano Observatory says this alert level does not mean that an eruption is imminent or that progression to an eruption from the current level of unrest is certain.