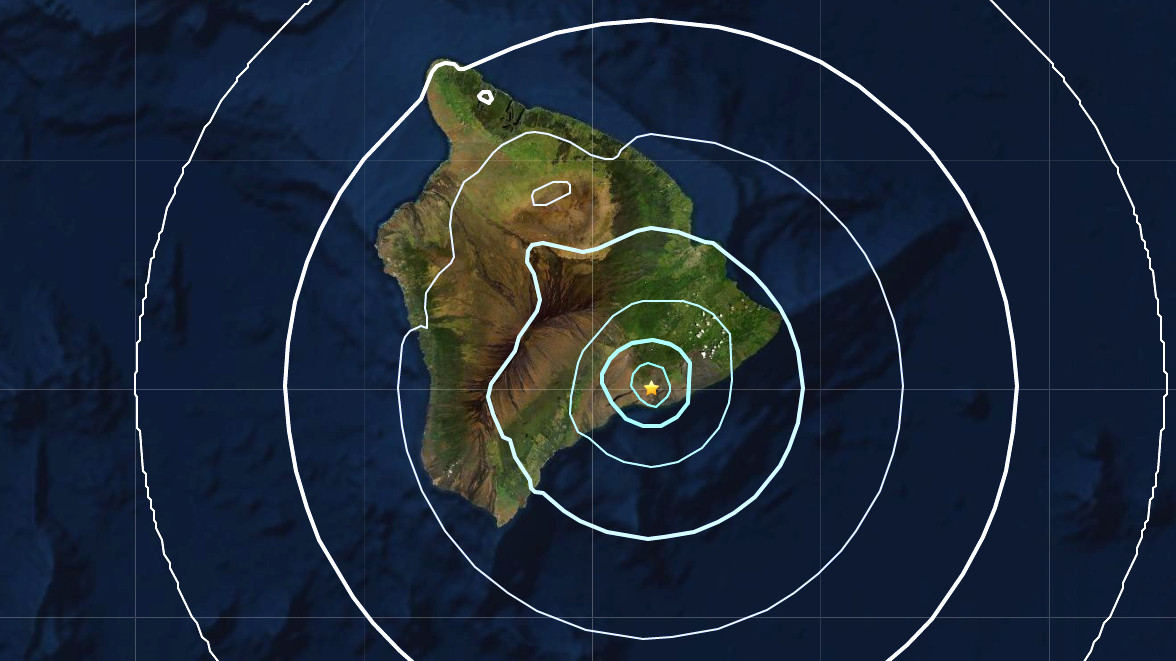 HAWAIʻI ISLAND - A Magnitude 4.2 earthquake occurred on Sunday at 11:40 a.m. and was felt for miles around the epicenter.

(BIVN) – A handful of earthquakes shook the south flank of Kīlauea volcano on Sunday afternoon, and at least one of them was strong enough to be felt as far away as Hilo.

So far, the area of Hilina Pali and Hōlei Pali has recorded three earthquakes over a magnitude 3.0. The largest of the three was a Magnitude 4.2 that occurred at 11:40 a.m. and was felt for miles around the epicenter.

There have been smaller earthquakes in the area, as well.

The three larger quakes all occurred at depths between 3 to 5 miles down.

Kilauea volcano has been erupting since December 20, 2020, with all activity confined to Halemaʻumaʻu crater at the summit.

The earthquake was centered about 15 km (9 miles) south of Volcano, under the Hilina Pali area of Hawai‘i Volcanoes National Park at a depth of 7.5 km (5 miles). A map showing its location is posted on the HVO website. More details are available at the National Earthquake Information Center website.

Weak to light shaking, with maximum Intensity of IV on the Modified Mercalli Intensity Scale, has been reported across the Island of Hawai‘i. At that intensity, significant damage to buildings or structures is not expected. The USGS “Did you feel it?” service received over 175 felt reports within the first hour of the earthquake.

According to HVO Scientist-in-Charge Ken Hon, the earthquake had no apparent effect on Kīlauea or Mauna Loa volcanoes. “We see no detectable changes in activity at the summits or along the rift zones of Kīlauea or Mauna Loa as a result of this earthquake. Aftershocks are possible and could be felt.” HVO continues to monitor Kīlauea and other Hawaiian volcanoes for any changes.

Kīlauea’s south flank has been the site of 40 earthquakes of magnitude-4.0 or greater during the past 20 years. Most are caused by abrupt motion of the volcano’s south flank, which moves to the southeast over the oceanic crust. The location, depth, and waveforms recorded as part of today’s earthquake are consistent with slip along the steep faults of the pali. A few felt earthquakes preceded this event, including a magnitude-3.6 and magnitude-3.4 earlier in the morning. Aftershocks from this magnitude-4.2 earthquake are likely.