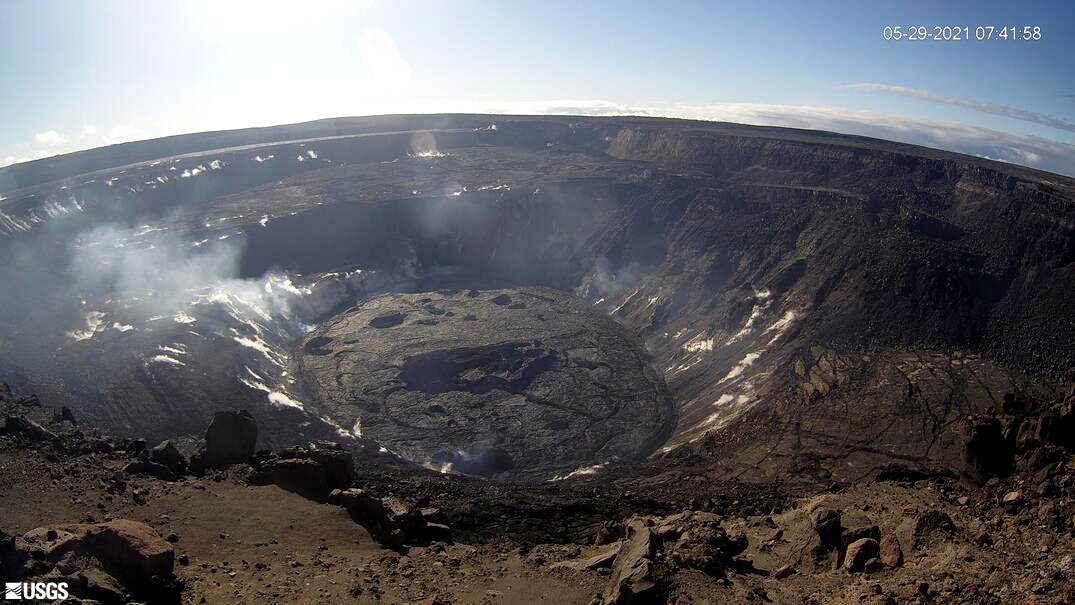 USGS webcam panorama of Halemaʻumaʻu and down-dropped caldera floor from the west rim of the new summit collapse features as of Saturday, May 29th.

HAWAIʻI VOLCANOES NATIONAL PARK - Statistically, most eruptions that resume, do so within 3 months after pausing, scientists say. 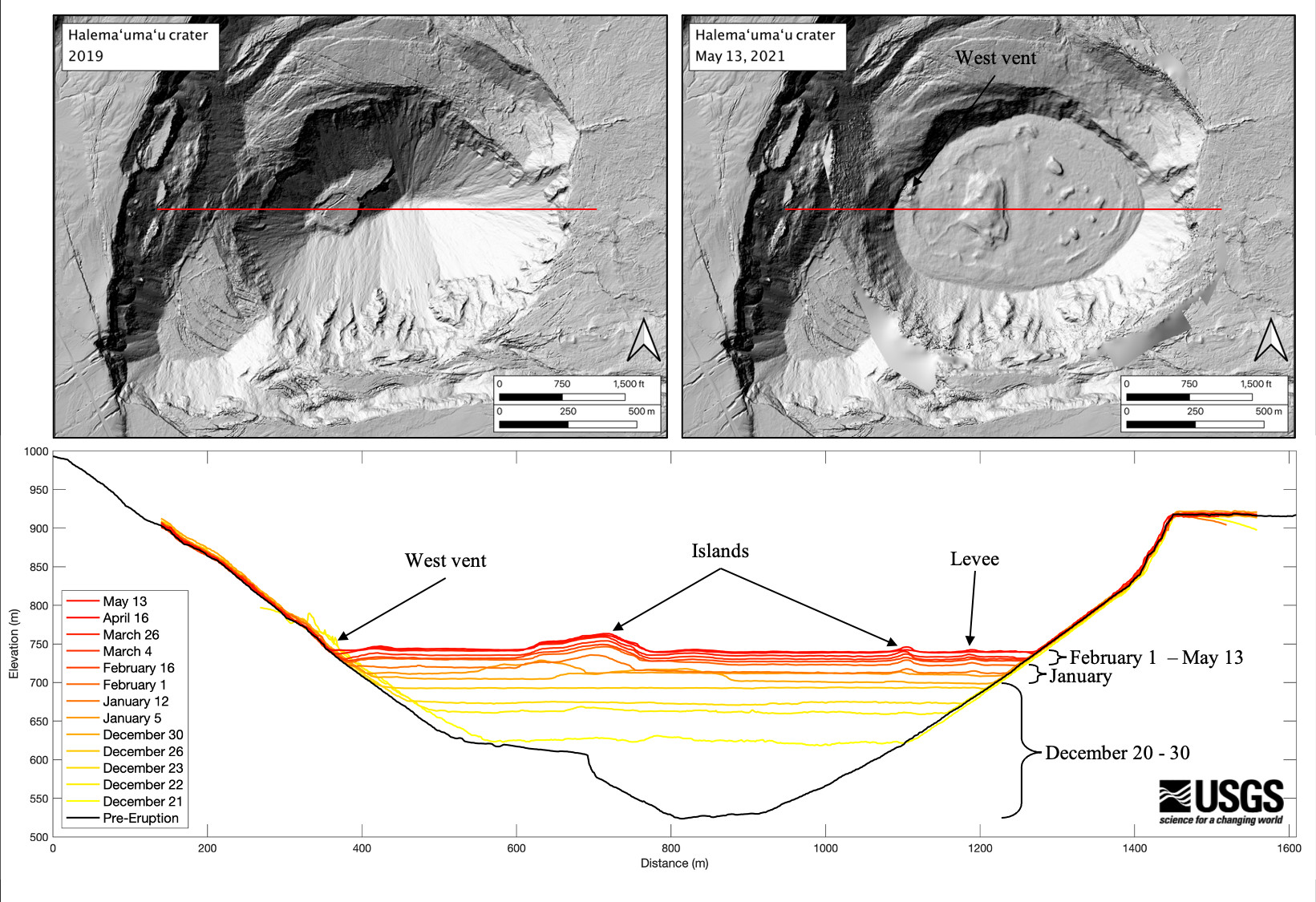 USGS: “The digital elevation models (DEMs) created from photos taken during helicopter overflights of the Kīlauea summit have many useful purposes. Using an elevation profile line across Halema‘uma‘u crater from each DEM allowed HVO scientists to track the rise of the lava lake (bottom panel). In just the first 10 days of the eruption (Dec. 20–30, 2020), the lava lake rose to 80% of its current depth. The lake rose more in the month of January, about 25 m (82 ft), than it has in the last three months (about 15 m or 50 ft). The lava lake is now 229 m (751 ft) deep. The elevation profiles also show that the islands in the lake continued to rise with the lake surface. The top two panels show a pre-eruption DEM of Halema‘uma‘u crater from 2019 (left) and a DEM of the crater from May 13, 2021 (right). The red line in each top panel shows the elevation profile line used for the bottom panel. The profile line is one mile long.” USGS graphic and data processing by B. Carr.

(BIVN) – This week, scientists with the USGS Hawaiian Volcano Osbervatory announced that Kīlauea volcano was no longer erupting lava at the Halemaʻumaʻu summit crater. As a result, the Volcanic Alert level was downgraded from WATCH to ADVISORY.

The Halemaʻumaʻu lava lake celebrated its 5-month anniversary by doing what we all like to do on our special day, taking a break. Hawaiʻi Volcanoes National Park suggested that Kīlauea’s summit eruption was getting ready for a “luana iki” or little rest, a more poetic way of describing a pause in eruptive activity.

What causes an eruption to pause? A pause is caused by an interruption in the supply of magma to the eruption site or vent. Now, how do we know the eruption has paused? Well, that’s a deceptively simple question with a surprisingly complex answer in this situation.

Molten lava is glowing red and generally easy to spot erupting from the vent, especially at night. And, likewise, generally easy to tell when it’s stopped. However, in the case of the lava lake, the vent supplying the lava eventually crusted over and lava was no longer visible.

The best way to tell if lava is still filling the crater (without being able to see the lava) is to see if the level of lava in the lake is continuing to rise. The crater forms a natural measuring cup, except that it’s a very strange shape and it has no markings to use to measure volume. We measure the distance to the surface of the lava lake using laser rangefinder instruments and then apply some algebra, trigonometry, and a computer to find the depth, volume, and lava supply rate of the lava lake.

The amount of sulfur dioxide gas (SO2) being released from the vent is directly related to the amount of lava being erupted. Both erupted lava volume, approximately 8 million cubic meters or 10 million cubic yards per day, and SO2 gas release, 40,000 tonnes per day, were extremely high at the beginning of the eruption. These exponentially decreased over the course of the eruption to about 70,000 cubic meters or 90,000 cubic yards of lava per day and less than 1000 tonnes of SO2 per day by early- to mid-April.

The eruption rates and SO2 gas emissions declined precipitously after April 16th, coincident with the level of lava in the lake reaching the level of the vent. This relationship suggests that the colder, degassed lava within the lake essentially drowned the vent.

This period also saw a decrease in seismic tremor related to magma movement and degassing within the dike feeding the vent. In addition, a weak pattern of inflation associated with increased earthquakes beneath Kīlauea caldera suggest that magma has shifted to accumulating at depth instead of rising to the surface.

Finally, the top of the lava lake crusted over as the lava supply dwindled and stopped, with the last surface activity seen on May 23rd. So, without being able to directly see if new lava was entering the lake, USGS Hawaiian Volcano Observatory (HVO) scientists used lava lake depth measurements to infer that the lava supply stopped and that the eruption “paused”.

Many eruptions undergo brief pauses then resume activity within the same vents. There were numerous pauses followed by resumption of activity during the Puʻuʻōʻō eruption and many have also been recorded in the past including during the Maunaulu, Kīlauea Iki, and 1955 lower East Rift Zone eruptions.

So, how do we know if the 2020–21 Halemaʻumaʻu eruption is paused or pau? Statistically, most eruptions that resume, do so within 3 months after pausing. For now, we can only watch and wait to see if activity returns to this same vent system ending the pause. Or alternatively, if the eruption is truly pau, we may be entering a period of quiescence prior to Kīlauea’s next eruption.