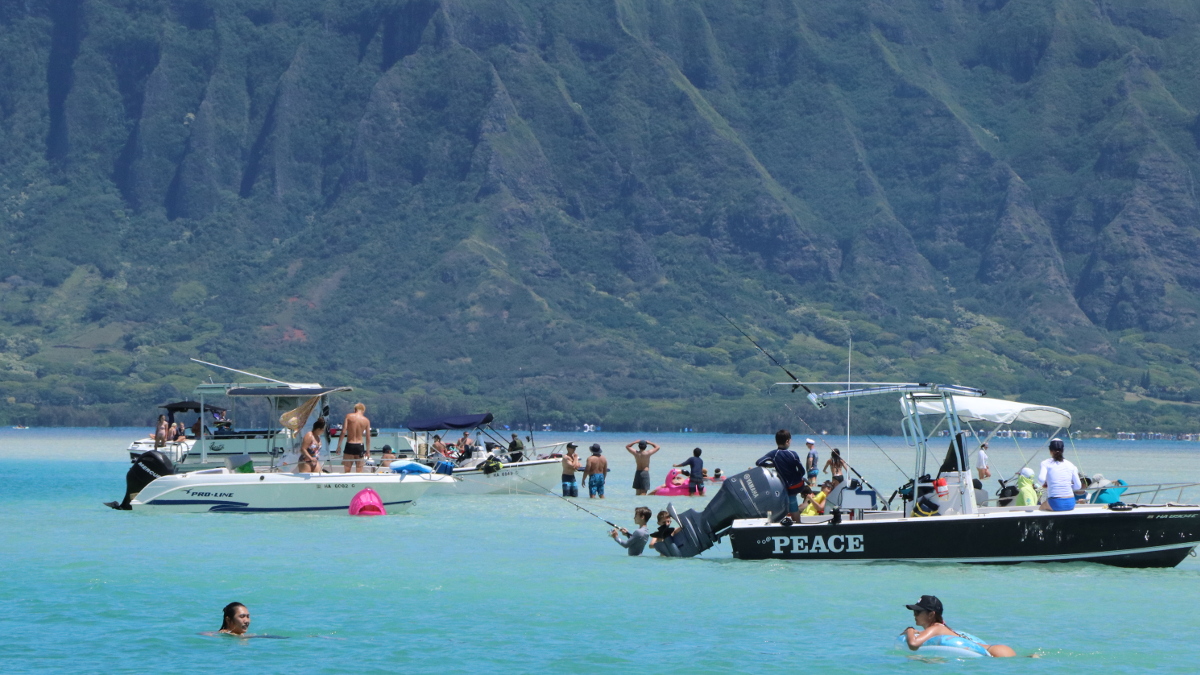 HONOLULU, Hawaiʻi - People returned to the beaches in Hawaiʻi for the year's first three-day holiday weekend without strict COVID-19 restrictions in place.

(BIVN) – Beaches around Hawaiʻi got busy again this Memorial Day weekend. The State Department of Land and Natural Resources provided this update on the statewide activity:

The first three-day holiday weekend in a year without strict COVID-19 restrictions in place will seemingly pass with very few issues on beaches and in near shore waters around the state.

This is the 10th year that alcohol has been banned at the Laka o Ahu Sandbar in Kāne’ohe Bay over the Memorial Day weekend (ban is also in effect 4th of July and Labor Day weekends). Officers from the DLNR Division of Conservation and Resources Enforcement (DOCARE) patrolled He‘eia Kea Small Boat Harbor, the launch point for the sandbar, and the popular sandbar itself by boat and jet ski.

DOCARE Lt. Fagota “Junior” Tataipu said more than two dozen citations were issued in an around the parking lot and boat launch on Sunday, as people jockeyed for coveted parking places. “We had two fights break out over parking and in addition to tickets for parking and motor vehicle violations, officers also wrote citations for 4-6 boating safety violations. We have zero tolerance for safety issues, particularly when children are on a boat.”

In the middle of the bay one officer instructed three teen-aged boys to get down off a channel marker. The boat they were on was stationary in the channel which is not permitted. Back on the sandbar officers also told a jet ski operator that he was in violation of the rules by having his vessel up on the sandbar. Officers were also dispatched to Kahana Bay after receiving a report of illegal jet ski use there, but by the time they arrived there was no evidence of rules violations.
On Sunday, an estimated 80 boats were at the sandbar, with 50-60 present today.

DOCARE Chief Jason Redulla said, “Given the pent-up demand, with this being the first long weekend without masks, we’re very pleased with the compliance we got from most people. An officer did break up a party at Kaiwi State Scenic Shoreline on Sunday afternoon, but all in all most people were well behaved, out enjoying the beautiful weather, and playing by the rules. That’s gratifying.”

On Sunday night, a trio of DOCARE officers assisted a lone contract security guard “sweep” the Keawaula Section of Kaʻena Point State Park on O‘ahu’s northwestern coast. New rules in place there, call for the closing of the parking lot gate at 7 p.m. on Sunday nights. Using all-terrain vehicles officers traveled up and down the beach advising people to pack and up and leave the park by 7 o’clock to avoid having their vehicles “impounded” behind the gates until tomorrow morning.

Again, most people were compliant, but one young beachgoer argued loudly with the officers and flipped them off after learning she would not be able to watch the sunset from within the park. The new rules for Keawaula were put into place after out-of-control parties during the coronavirus pandemic and as a result of both DOCARE and the DLNR Division of State Parks not having the funding and manpower to provide around-the-clock enforcement and maintenance services.

Redulla added, “We’ve explained this many times. Our officers cannot be everywhere, all the time. Hawai‘i has more than 700 miles of coastline and we rely both on people’s own good behaviors and the swift reporting of crimes and violations…responsible citizens are our eyes and ears, and we value the added vigilance and reporting people provide DOCARE daily. It does make a difference.”

Violations of State natural and cultural resources rules and laws can be reported by calling the 24-hour DOCARE hotline at 643-DLNR (3567) or via the free DLNRTip app available for Apple and Android devices.