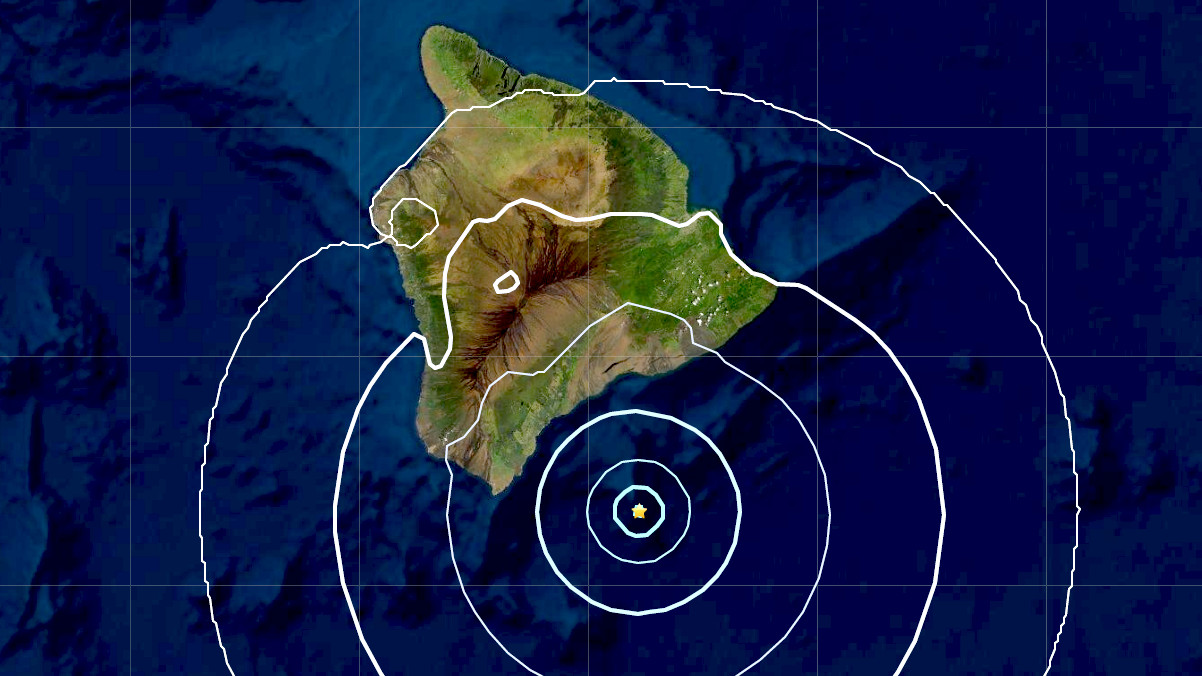 image shows the interactive map and the location of the earthquake, courtesy USGS

(BIVN) – Following a magnitude-4.0 earthquake located off the southeastern coast of Hawaiʻi island in the vicinity of Lōʻihi seamount on Wednesday evening, the USGS Hawaiian Volcano Observatory issued this information statement:

The earthquake was centered about 42 km (26 miles) southeast of Nāʻālehu, under Lō‘ihi seamount at a depth of 11 km (7 miles). A map showing its location is posted on the HVO website. More details are available at the National Earthquake Information Center website.

Moderate shaking, with maximum Intensity of V on the Modified Mercalli Intensity Scale, has been reported across the Island of Hawai‘i. At that intensity, significant damage to buildings or structures is not expected. The USGS “Did you feel it?” service received 3 felt reports within the first hour of the earthquake.

According to HVO Scientist-in-Charge Ken Hon, the earthquake had no apparent effect on Kīlauea or Mauna Loa volcanoes. “We see no detectable changes in activity at the summits or along the rift zones of Lōʻihi, Kīlauea, or Mauna Loa as a result of this earthquake. Aftershocks are possible and could be felt.” HVO continues to monitor Kīlauea, Mauna Loa, and other Hawaiian volcanoes for any changes.

Lōʻihi seamount is an active volcano on the seafloor south of Kīlauea Volcano, about 30 km (19 miles) from the shoreline of the Island of Hawaiʻi. The top of the seamount is about 975 m (3,199 feet ) below sea level. The volcano consists of a broad summit area marked by three pit craters and two prominent rift zones extending from the summit about 22 km (13.6 mi) south-southeast and about 15 km (9.3 mi) north-northeast. The volcano likely has a shallow magma chamber between 1 to 2.5 km (0.6 to 1.6 mi) deep below the summit. In mid-May 2020, HVO detected more than 100 earthquakes beneath Lōʻihi. The earthquake activity may have represented a brief magmatic intrusion or movement of magmatic fluids within the volcanic edifice

Background: Intermittent earthquake activity has been recorded in the vicinity of Lō‘ihi since as early as 1952. The most energetic earthquake sequence occurred in July-August 1996, which included more than 4,000 earthquakes, with nearly 300 events larger than M3.0 and 95 events in the M4.0 to 4.9 range. More recently, a swarm of 100 earthquakes occurred on May 11, 2020, with 18 events in the M3.0 to 3.9 range. There are no working monitoring instruments on Lō‘ihi Volcano, whose peak is about 1,000 m (3,280 ft) below sea level. All real-time information about the volcano is derived from land-based seismometers on the Island of Hawai‘i.

The Pacific Tsunami Warning Center reported that no tsunami was generated by the earthquake.