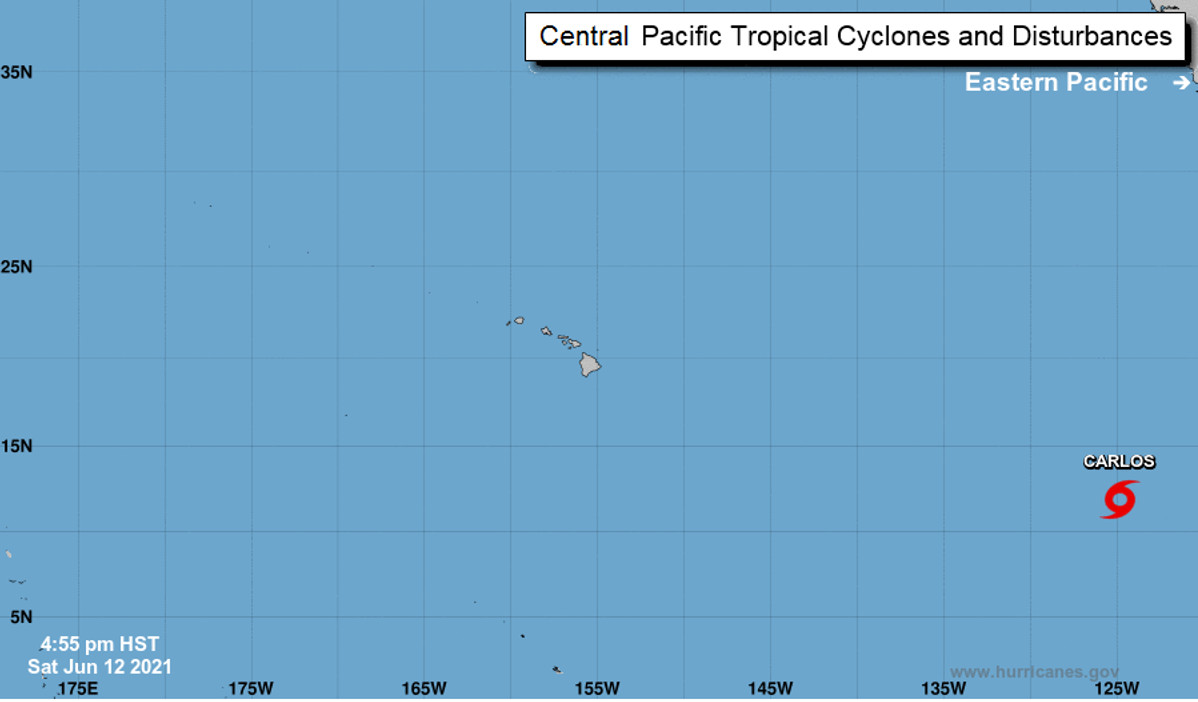 HAWAIʻI - The National Hurricane Center expects Tropical Storm Carlos to slow down and weaken over the next few days. 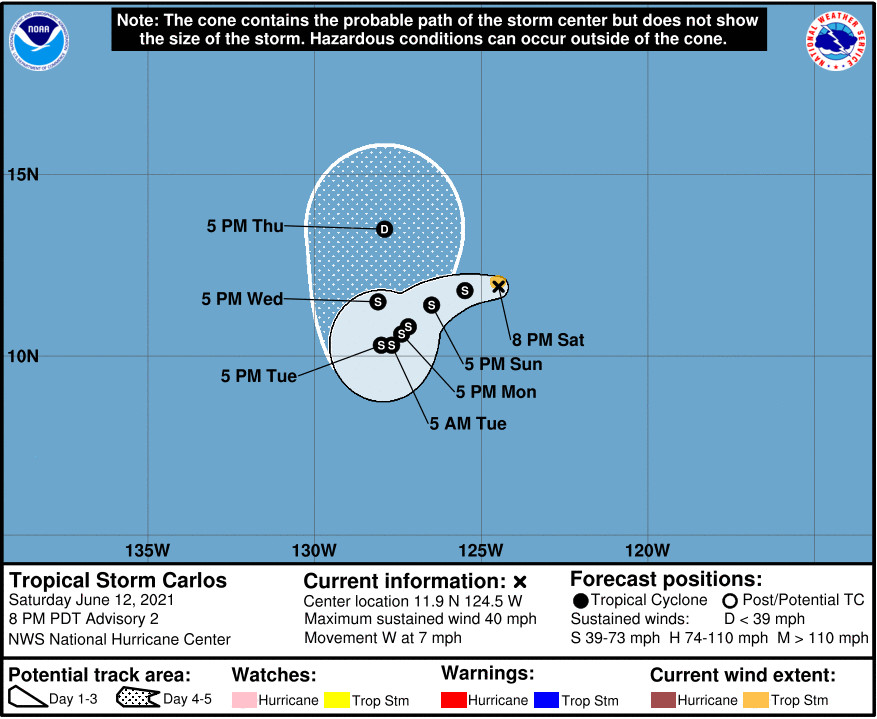 (BIVN) – Tropical Storm Carlos formed in the Eastern Pacific on Saturday, about 1,225 miles from the southern tip of Baja California.

There are no coastal watches or warnings in effect, as Carlos is far from land. The National Hurricane Center in Miami, Florida forecasts the storm to gradually slow its 7 mph westward movement, and turn to the west-southwest over the next 24 to 36 hours.

From the National Hurricane Center:

The disturbance that has been tracked westward for the past several days across the open waters of the the tropical eastern Pacific has finally established a sufficiently well-defined low-level circulation to be designated as Tropical Depression Three-E. Convection increased last night and began to consolidate, while satellite images and microwave data this morning indicated that there was evidence of a well-defined low developing. This was later confirmed by a pair of ASCAT overpasses. These overpasses showed a compact radius of maximum winds. And, although the ASCAT-A data had a few vectors between 30-35 kt, these were not homogeneous and appeared unrepresentative of the system’s intensity. In addition, the rather ragged satellite appearance and the Dvorak intensity estimate of 2.0 from SAB are suggestive that this system should be initialized as a 30-kt depression for this advisory.

The environment surrounding the depression is moderately conducive for gradual strengthening, with SSTs of 27-28 degrees C, mid-level RH values between 50-60 percent, and vertical wind shear of about 5-10 kt. These conditions are expected to continue for the next 2-3 days. By 72 h, dry air and subsidence are expected to hinder any further intensification and should begin a weakening trend. By late in the forecast period, the system is forecast to cross the 26 degree C isotherm, which should hasten the pace of weakening. The official intensity closely follows the HFIP corrected consensus HCCA, which shows the depression becoming a tropical storm tonight, and levels off its intensity by 48 h, followed by a weakening trend after 60 h.

A mid-level ridge to the north of the cyclone is steering it at a somewhat uncertain 275/08 kt. This ridge is forecast by nearly all of the models to weaken over the next couple of days, leaving the depression in a region of very weak steering currents through early next week. A mid-upper level trough digging southward to the northwest of the cyclone should induce a northerly component of motion along with an increase in forward speed by midweek. As said, there is good agreement on the pattern, however, the models vary greatly on how abruptly they slow the system. This is resulting in a track model spread of about 300 n mi by 72 h. The NHC track forecast tries to split the difference by closely following the TVCE and TVCN consensus aids.