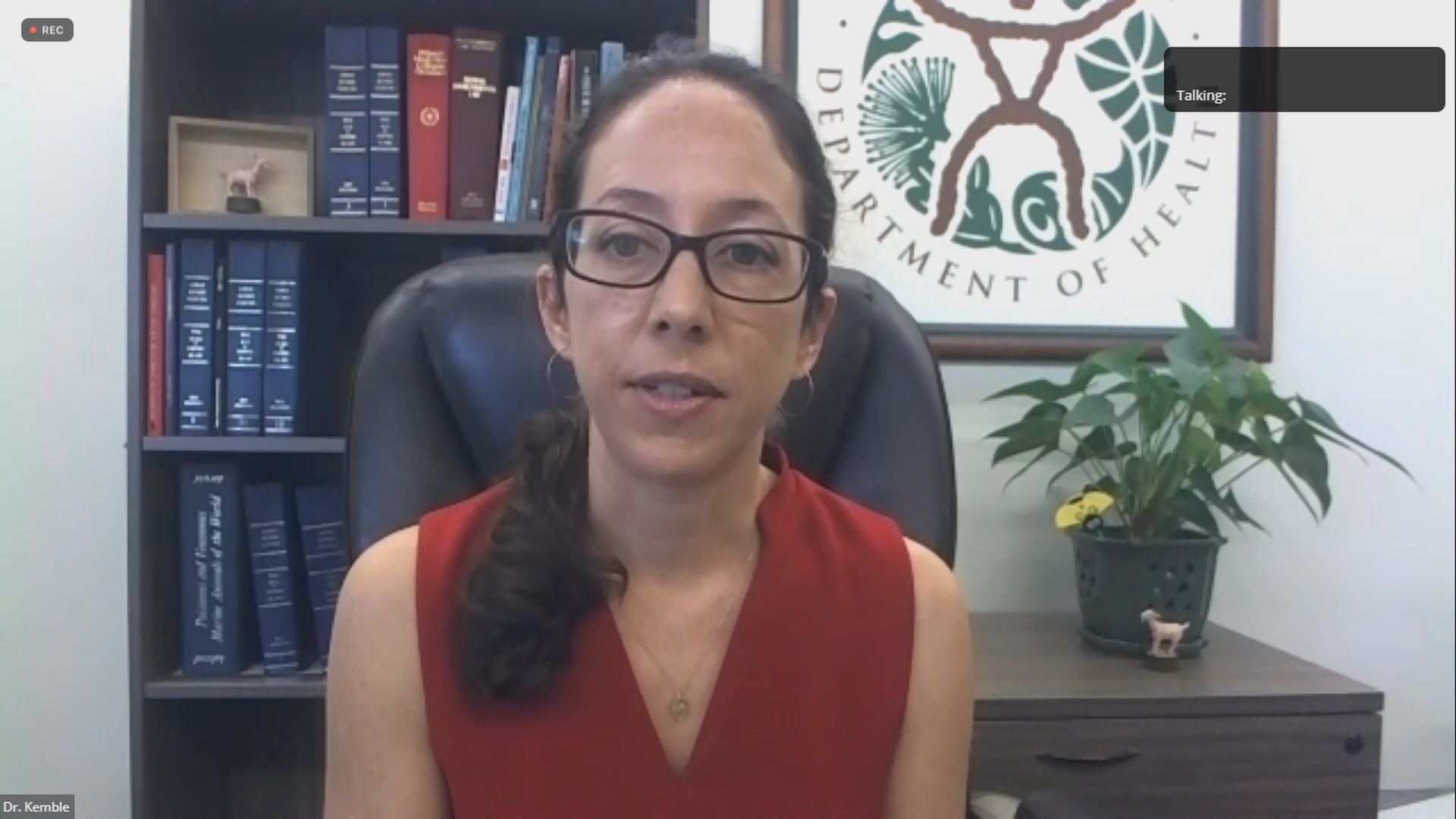 HAWAIʻI - To date, Hawaiʻi has detected three cases of the Delta variant associated with travel from the continental United States. One of those cases is on Hawai‘i Island. 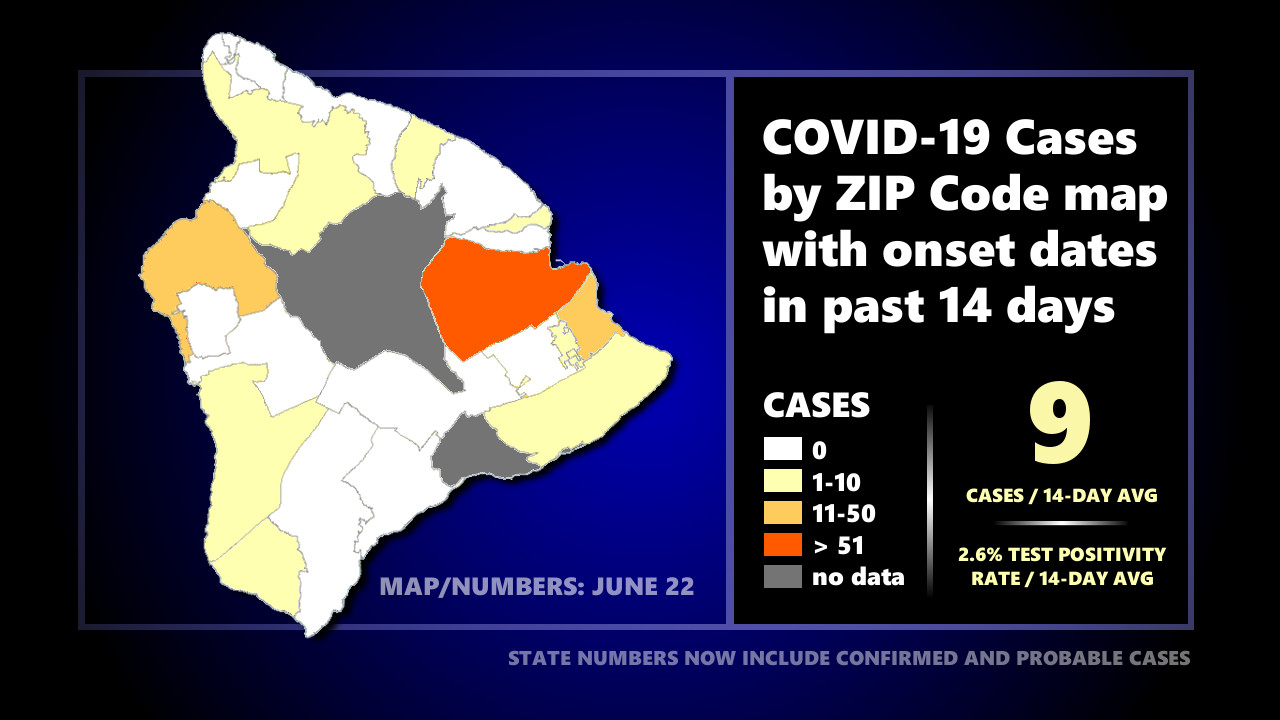 This graphic features the average number of new cases – both confirmed and probable – reported by the State of Hawaiʻi over a 14-day period, as well as the test positivity rate for the same time period. The map shows zip code areas with reported cases having onset dates in the past 14 days, according to the Hawaiʻi health department.

(BIVN) – There were 20 newly reported cases of COVID-19 in the State of Hawaiʻi on Tuesday. Five (5) new cases were identified on Hawaiʻi island, with five (5) persons hospitalized.

The Hawaiʻi Department of Health says there have been 167 cases of COVID-19 reported on Hawaiʻi island in the past 14 days. Hawaiʻi County has seen an average 2.6% test positivity rate over the last two weeks, with an average of nine (9) new cases per day.

On the Health Department’s zip code area map showing reported COVID-19 cases with onset dates in the past 14 days, there are three (3) locations showing over 10 cases:

The Hawaii Department of Public Safety provided this update on the cluster of cases at Hawaiʻi Community Correctional Center in Hilo:

The Hawaii Community Correctional Center (HCCC) reports 42 recovered inmates. That brings the total active positive inmate cases at HCCC down to 69 and the total recovered up to 167. There were no new HCCC inmate or staff results received today. The Halawa Correctional Facility received 20 inmate test results. Of that number, 9 are positive and 11 are negative. The Department of Public Safety (PSD) Health Care Division identified all nine as recent transfers from HCCC. They were already in a mandatory transfer-related quarantine.

Officials say the next community test event is scheduled for Wednesday in Hilo at the Waiakea High School-upper parking lot from 3 p.m. to 6 p.m.

To date, the State of Hawaiʻi says 1,653,324 cumulative doses of COVID-19 vaccine have been administered; an increase of 2,195 from June 21st. Health officials say 57% percent of the State population has completed the full vaccination.

The Hawaiʻi Department of Health reported on Tuesday that one “Delta variant” case has been identified on Hawaiʻi island. So far, four (4) Delta variant cases have been found statewide, and one case on Oʻahu appears to be as a result of community spread.

During an online news conference, state health officials would not say where on Hawaiʻi island the single Delta variant case was identified. From the Hawaiʻi Department of Health:

The Hawai‘i Department of Health’s State Laboratories Division (SLD) confirms the SARS-CoV-2 variant B.1.617.2, also known as the Delta variant of concern, is spreading in the state.

To date there have been three cases of the Delta variant associated with travel from the continental United States. Two of those cases are on O‘ahu and one is on Hawai‘i Island. In addition, the State Laboratories Division has identified the Delta variant in a specimen from an O‘ahu resident with no history of travel. The Department of Health is investigating to determine the extent of household and community transmission.

“A recently published study from Scotland found that the risk of COVID-19 hospital admission was approximately double in those with the Delta variant when compared to those with the B.1.1.7 strain, also known as the U.K. or Alpha variant,” said State Laboratories Division Administrator Edward Desmond.

The Delta variant, which was first detected in India, now makes up approximately 10% of all cases in the U.S. The Delta variant could soon become the dominant strain of SARS-CoV-2 in the nation according the Centers for Disease Control and Prevention (CDC).

“Given what we know about the Delta variant and the cases already identified in Hawai‘i, we expect to detect additional cases in the coming weeks,” said Dr. Sarah Kemble, the acting State Epidemiologist. “Our best defense against of the variants is to get vaccinated as soon as possible.”

The COVID-19 vaccines authorized for use in the U.S. are effective against COVID-19 variants currently spreading in the nation.

The State Laboratories Division began genome sequencing of SARS-CoV-2 in June 2020. It now examines 50 to 100 specimens a week and has developed a testing algorithm designed to find variants in a timely manner.