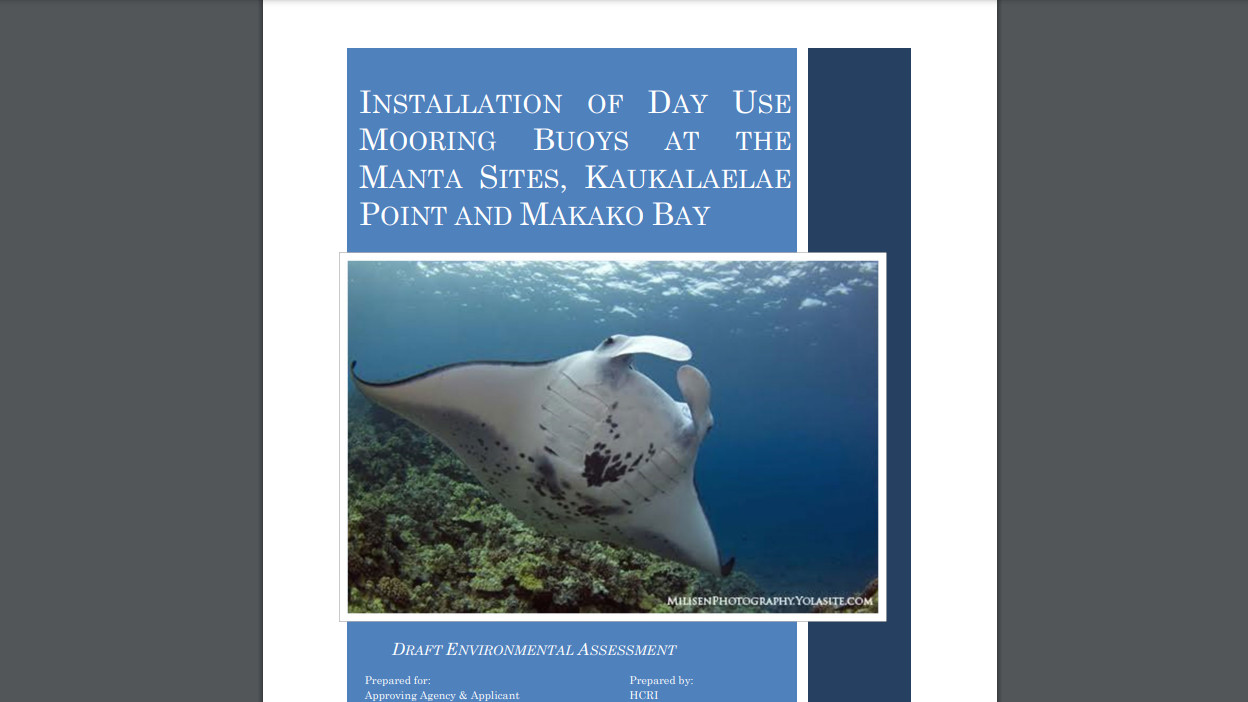 KONA, Hawaiʻi - The State will eventually have up to 13 moorings present at Makako Bay, and 12 moorings at Kaukalaelae Point.

(BIVN) – The State of Hawaiʻi is planning to reconfigure and install additional day-use moorings at two popular manta viewing sites along the Kona coast.

The Department of Land and Natural Resources’ Division of Boating and Ocean Recreation has published a draft Environmental Assessment, proposing work at Kaukalaelae Point and Makako Bay, in order to bring a total of 12 and 13 moorings at each site, respectively.

“The sites presently have no permitted moorings maintained or managed by the State, and the new configuration will accommodate more of the boats utilizing these sites on a nightly basis to conduct the highly popular manta ray viewing tours,” the draft EA states. “Moorings will furthermore reduce overcrowding and offset anchoring on sensitive benthic habitat at the sites. The configuration of all moorings would maintain clearance from the US Coast Guard navigation channel, provide recreational opportunity for motorized vessels, and ensure continued use of the areas by non-motorized recreational users such as swimmers, paddlers, and other traditional uses of the site.”

According to the document, the project will entail: 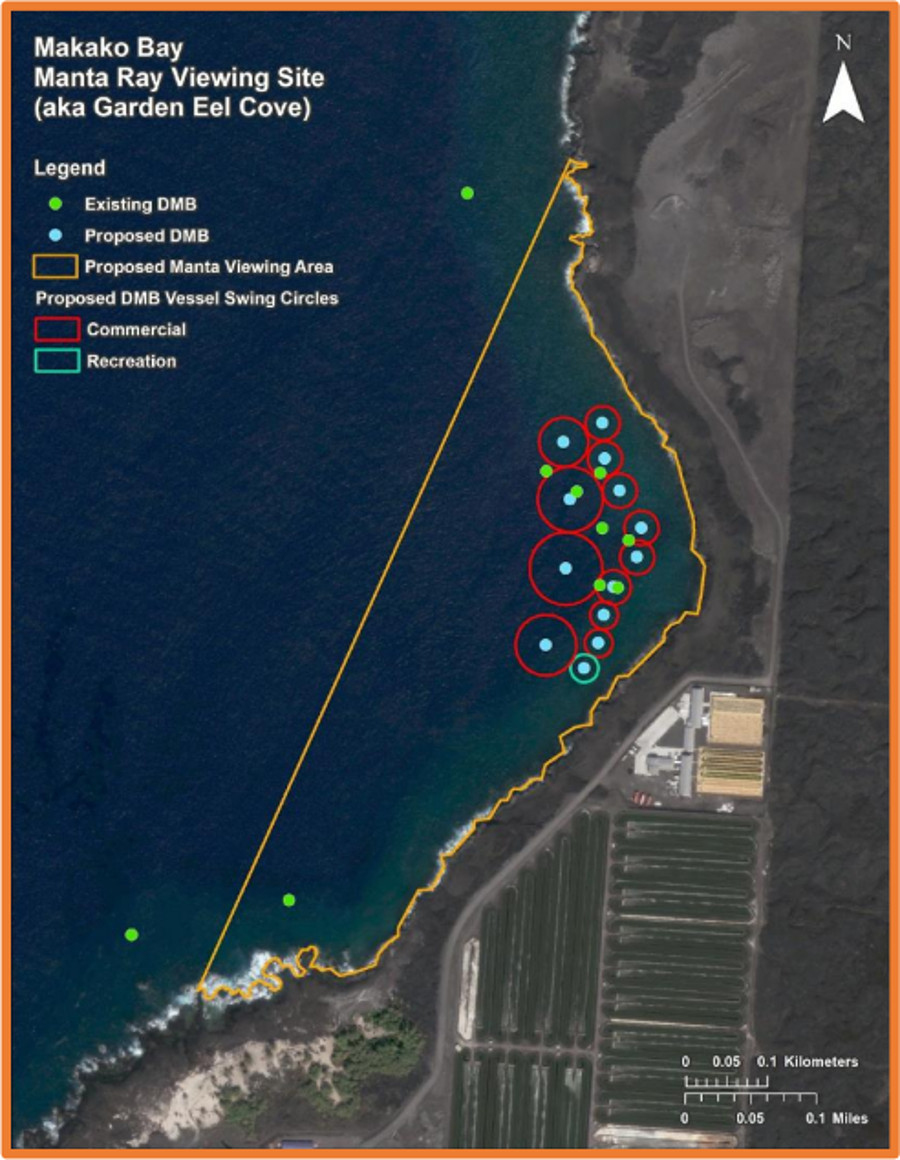 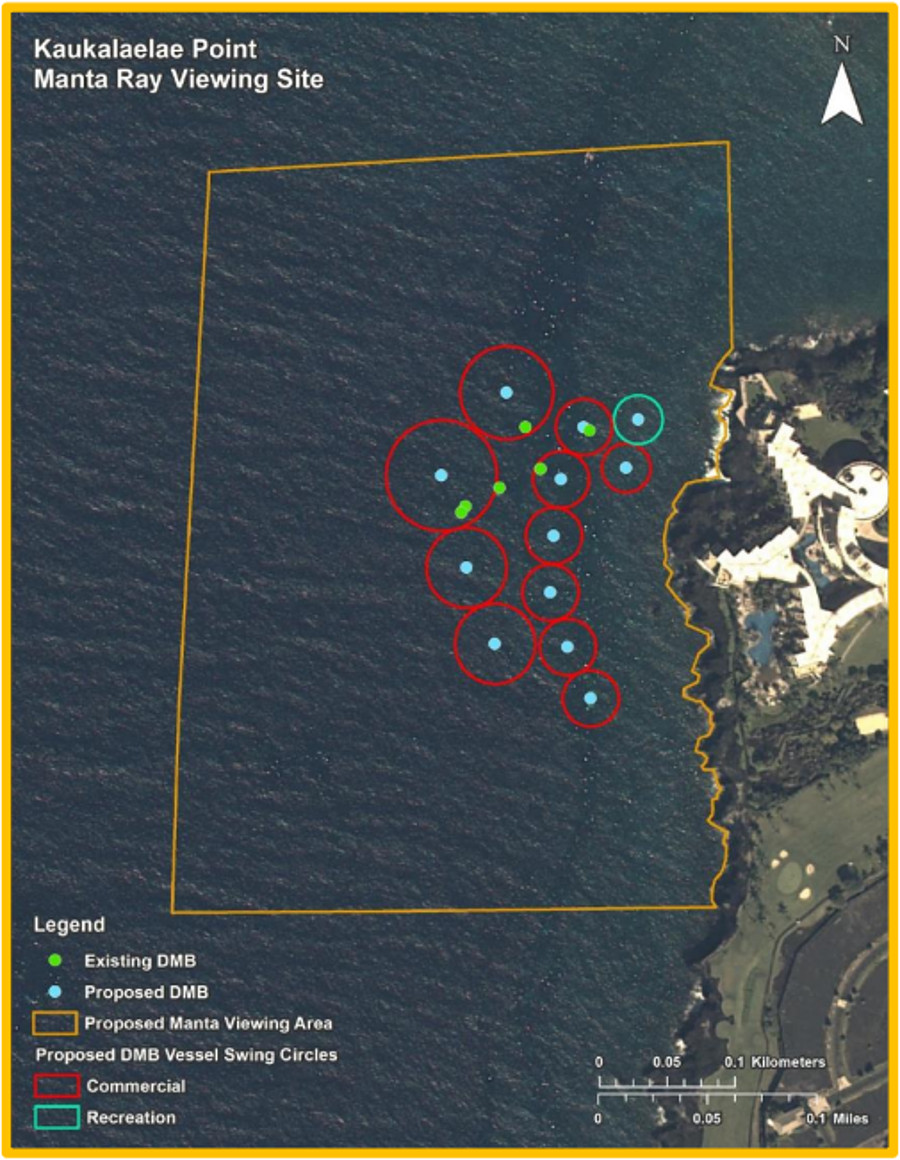 The draft EA explains how, in 2014, the State House of Representatives passed a resolution urging the Hawaiʻi DLNR to manage the Kona manta dive sites and address overcrowding, safety, and liability under existing statutes. Public meetings were held in 2016 and 2017.

According to the EA, the project will be carried out in two phases. For phase one:

Due to budgetary constraints, the program would install five priority moorings at Kaukalaelae Point where studies have consistently documented the highest levels of crowding. Installations are targeted to begin in Spring 2021 with semi-annual monitoring and maintenance for a period of four years. Nightly inspections are conducted by users with ad hoc repairs by contractor when appropriate…. Commercial business should not be interrupted as a result of the project, as construction will be limited to daylight hours when tours are not conducted and anchoring in sandy bottom areas will continue to be permissible when compliant with HAR Chapter 13-257. Duration of the installation process would not exceed 5 days for the initial installations of five moorings. These activities will increase the number of moorings at the site from five to nine. While nine moorings will not accommodate the average number of companies documented to offer tours prior to 2020, nine moorings will provide significant coral protection value to this high use site.

The project will require permits and approvals from the United States Army Corps of Engineers, Hawaiʻi Department of Health Clean Water Branch, and the Department of Planning Coastal Zone Management. Comments on the draft EA are due by July 23, 2021.