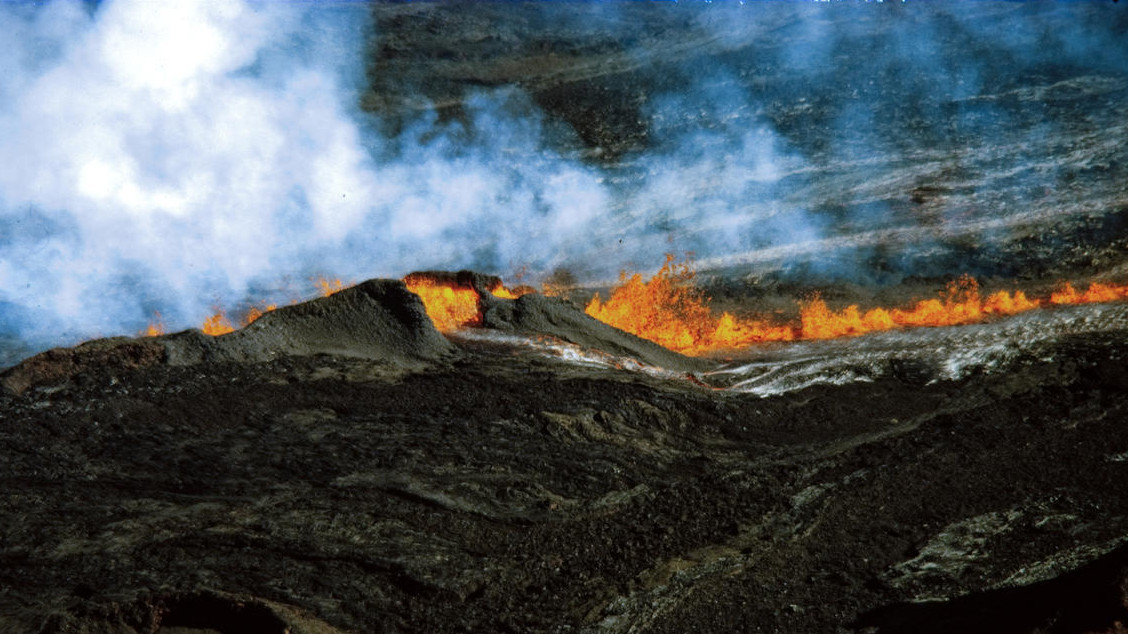 USGS photo of the Mauna Loa 1975 eruption. Lava fountains up to 20 m (65 ft) high erupted from fissures on the north flank of the volcano early Sunday morning, July 6, 1975.

VOLCANO WATCH: Remembering The Eruption Of Mauna Loa In 1975 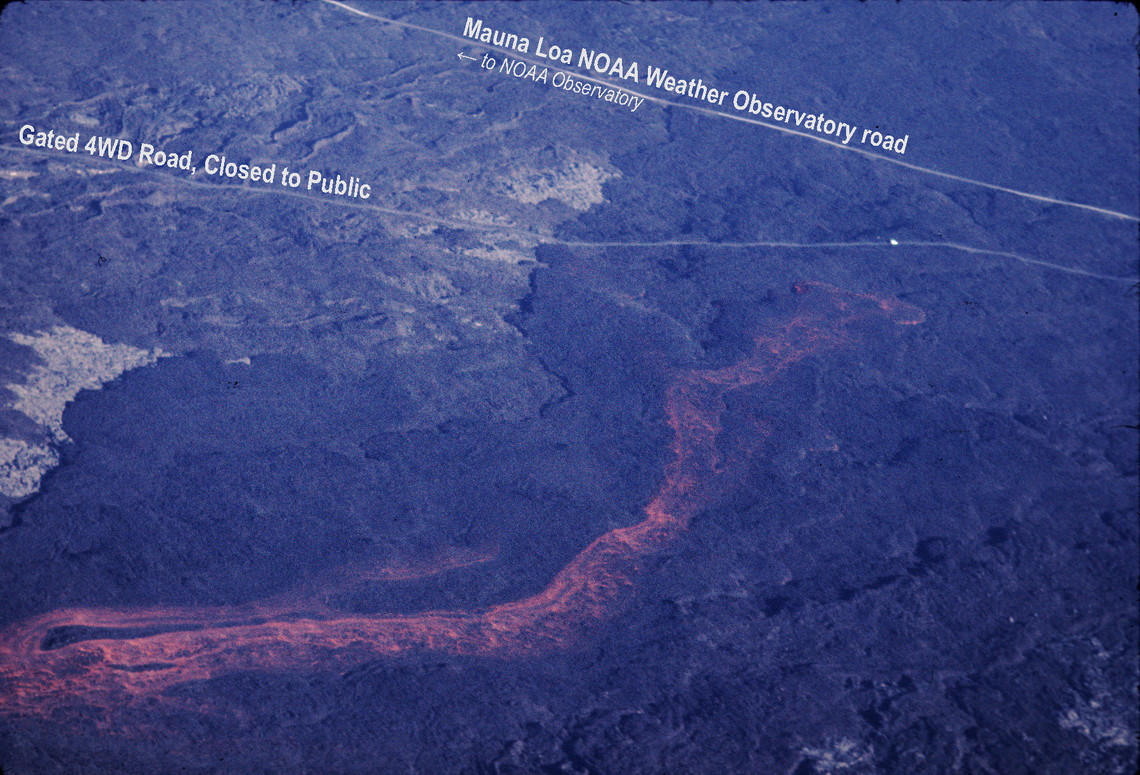 Aerial view of a portion of the north flank of Mauna Loa, looking north. In red is the ʻaʻā lava flow that nearly made it to the Mauna Loa NOAA Weather Observatory road. After this photo was taken, the flow advanced to the four-wheel drive summit access road before stopping. USGS photo by D.W. Peterson on July 6, 1975.

(BIVN) – Mauna Loa is not erupting, and its USGS Volcano Alert Level is ADVISORY. Scientists monitoring Mauna Loa say this alert level does not mean that an eruption is imminent or that progression to an eruption from the current level of unrest is certain.

What is interesting about the 1975 eruption? It was the first Mauna Loa eruption monitored by modern instruments, so it provides clues as to what we might observe in the lead up to a future Mauna Loa eruption. In addition, while all of Mauna Loa’s 33 eruptions since 1843 started at the summit, about half only had vents in the summit region—like in 1975. Thus, the 1975 eruption is a useful and well-documented example of Mauna Loa summit eruptions: a common style of activity for this volcano.

Mauna Loa showed clear signs of unrest beginning in April 1974 and had large seismic swarms in August and December 1974, with maximum daily earthquake counts of up to about 450 (August) and 1500 (December). Daily earthquake counts exceeded 100 most days from February through June 1975. Nothing unusual (given the previous months) was noticed during the day of July 5, 1975. However, that night at 10:51 p.m. HST, seismic activity rapidly escalated, and by 11:30 p.m., the USGS Hawaiian Volcano Observatory (HVO) notified authorities at the Hawaiʻi Volcanoes National Park and Hawaii County Civil Defense that an eruption appeared imminent. The eruption began July 5, 1975, at 11:42 p.m. with a line of fissures opening up across Mokuʻāweoweo Caldera. It was over by 7:30 p.m. on July 6.

HVO staff arrived at Mauna Loa’s summit area 2 hours after the eruption started. They found lava fountains extending across Mokuʻāweoweo Caldera through to about 1 km (0.6 miles) southwest outside the caldera, with flows advancing west and southeast. By 2:25 a.m. on July 6, additional fissures opened up across North Pit crater and northeast outside the caldera. By dawn, fountains and lava flows had stalled within Mokuʻāweoweo and at the southwestern fissures. The active fissures were now only northeast of Mokuʻāweoweo, with ʻaʻā flows travelling north about 2 km per hour (1.2 mph) towards the Mauna Loa NOAA Weather Observatory road. Around 7:15 a.m., the fountains feeding the ʻaʻā flows stopped erupting. This was good news for the road—the lava got to within 165 m (180 yards) of it but did not cut it off. Weak fountaining continued elsewhere northeast of Mokuʻāweoweo until nightfall, when the eruption ended.

Over the next few days it was unclear whether activity would pick up again, as inflation continued, dozens of earthquakes were felt, and hundreds more detected in Mauna Loa’s Northeast Rift Zone near Puʻuʻulaʻula. However, by July 10 seismic activity had waned, and between July 9–12 deflation was measured near Puʻuʻulaʻula. By July 12, HVO volcanologists were confident that the eruption was pau (finished)—for now.

The next—and most recent—eruption in 1984 covered over 90% of the 1975 lava flows. However, flows are still exposed just south (mauka) of the Mauna Loa NOAA Weather Observatory road about 3.5 km (2.2 miles) before the observatory.

While we don’t know when, or how long, the next Mauna Loa eruption will be, it will start at the summit if it follows the pattern set by eruptions documented since 1843. Next, the eruption will either stay at the summit—like in 1975—or migrate down Mauna Loa’s flank. Before the eruption, we expect weeks to months of unrest with a rapid escalation of seismic activity immediately prior to the eruption. As our monitoring network is more extensive and sophisticated than in 1975, we expect higher overall earthquake counts. Whatever Mauna Loa does, HVO will continue to closely monitor the volcano to keep you informed.