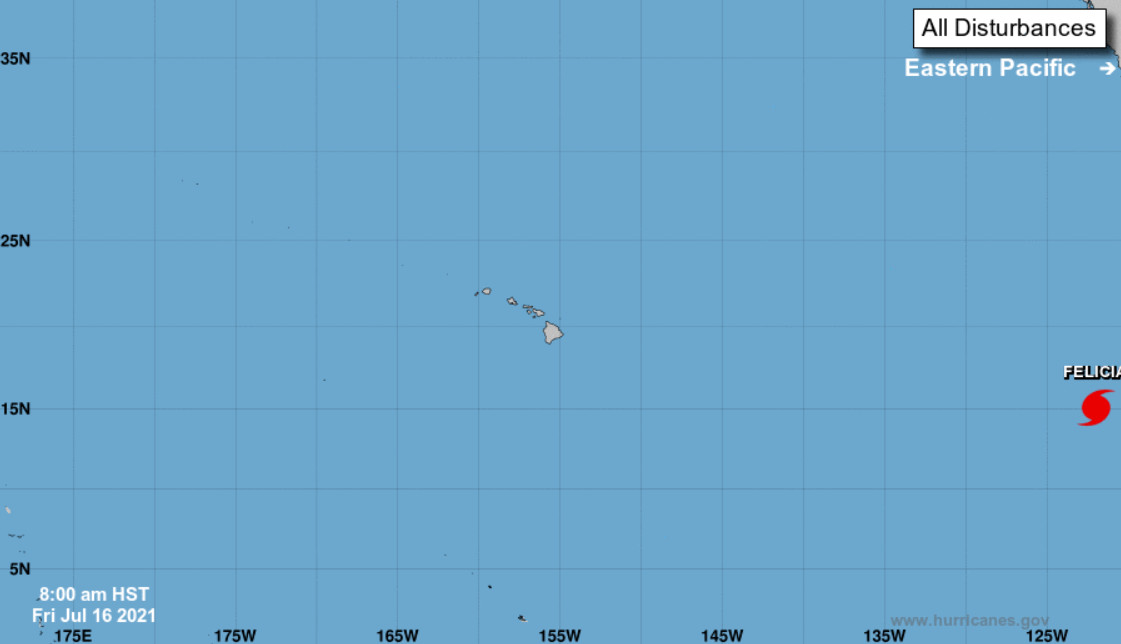 Image from National Hurricane Center website showing the location of Felicia, still in the Eastern Pacific, relative to Hawaiʻi.

HAWAIʻI ISLAND - Far from Hawaiʻi, Felicia could become a category 4 hurricane later this morning, but then it should weaken slowly through the weekend and into early next week.

Felicia is located more than 2,200 miles east-southeast of Hilo, Hawaii.

The National Hurricane Center in Miami is currently issuing advisories on Hurricane Felicia. The storm “is expected to move into the Central Pacific Hurricane Center area of responsibility next Wednesday as a tropical storm,” Honolulu-based forecasters said.

With maximum sustained winds have near 125 mph, “Felicia is a strong category 3 hurricane on the Saffir-Simpson Hurricane Wind Scale,” the National Hurricane Center said this morning. “Some additional strengthening is possible today, and Felicia could become a category 4 hurricane later this morning. Slow weakening is expected to begin by tonight, and continue through the weekend and into early next week.” 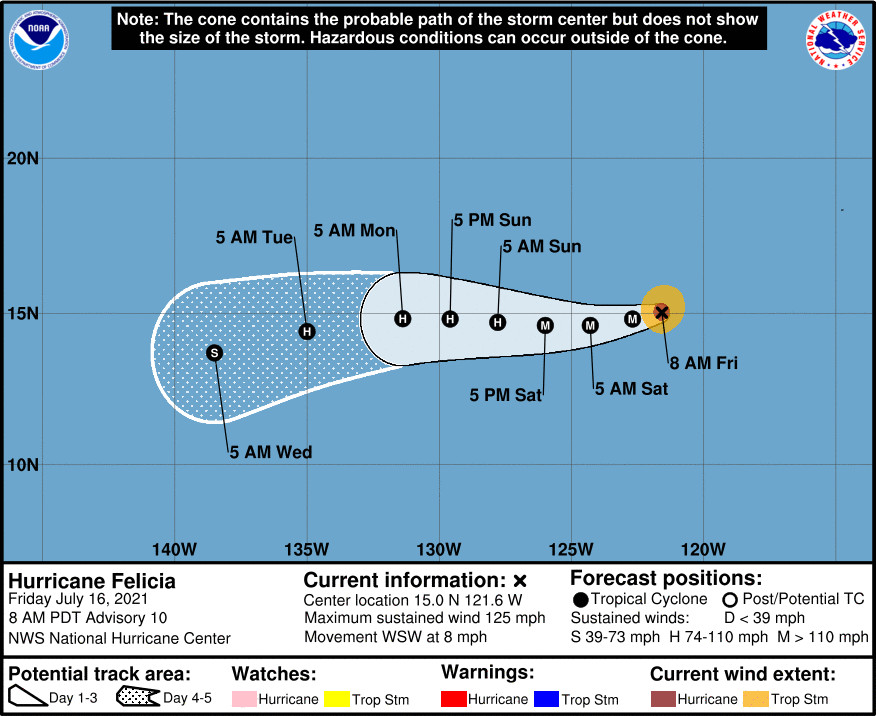 Behind Felicia is a broad low pressure system, located a few hundred miles south of the coast of southwestern Mexico, producing a large area of disorganized showers and thunderstorms. “Environmental conditions are expected to be conducive for gradual development during the next several days,” the National Hurricane Center reported, “and a tropical depression is likely to form within the next couple of days and move west-northwestward to westward at around 15 mph, a few hundred miles offshore of the southwestern coast of Mexico.”

On Felicia, the National Hurricane Center provided this discussion on Friday morning:

Compact Hurricane Felicia has continued to rapidly strengthen this morning with a well-defined, warm (>15C) clear eye now evident in infrared satellite imagery. However, the convective cloud tops surrounding the eye have warmed by almost 10 deg C during the past several hours, and a 1022Z ATMS microwave satellite pass showed the inner core convection a little less organized. Subjective satellite intensity estimates from TAFB and SAB were a consensus T6.0/115 kt and objective estimates from UW-CIMSS ADT over the past couple of hours have averaged T5.7/105 kt. The initial intensity is raised to 110 kt, and just below category 4 strength, for this advisory based on a blend of the various satellite intensity estimates and the slightly degraded aforementioned convective features.

Felicia is moving west-southwestward or 255/07 kt. Strong deep-layer ridging to the north of the hurricane is expected to keep Felicia moving west-southwestward for the next 12-24 h. Thereafter, the global and regional models all show the ridge relaxing somewhat, which should allow Felicia to move more westward in the 24-120-hour forecast period. The new NHC track forecast is essentially on top of and just an update of the previous advisory track, and lies near the middle of the tightly packed simple and corrected consensus models TVCE, GFEX, and NOAA-HCCA.

Some additional slight strengthening could occur this morning due to low vertical shear and warm SSTs conditions, with Felicia briefly becoming a category 4 hurricane. However, the warm water beneath the powerful hurricane isn’t very deep as indicated by upper-ocean heat content values currently only around 5 units, which suggests that cold upwelling could begin at any time during the next 12 hours. Ocean heat content values are forecast to remain below 10 units from 24-96 hours, and decreasing to less than zero thereafter. Thus, slow weakening is forecast to begin by 24 h and continue through the remainder of the forecast period despite the favorable low (<10 kt) vertical wind shear regime that Felicia will be moving through. The new intensity forecast is similar to the previous advisory, and closely follows the consensus intensity models NOAA-HCCA and IVCN.