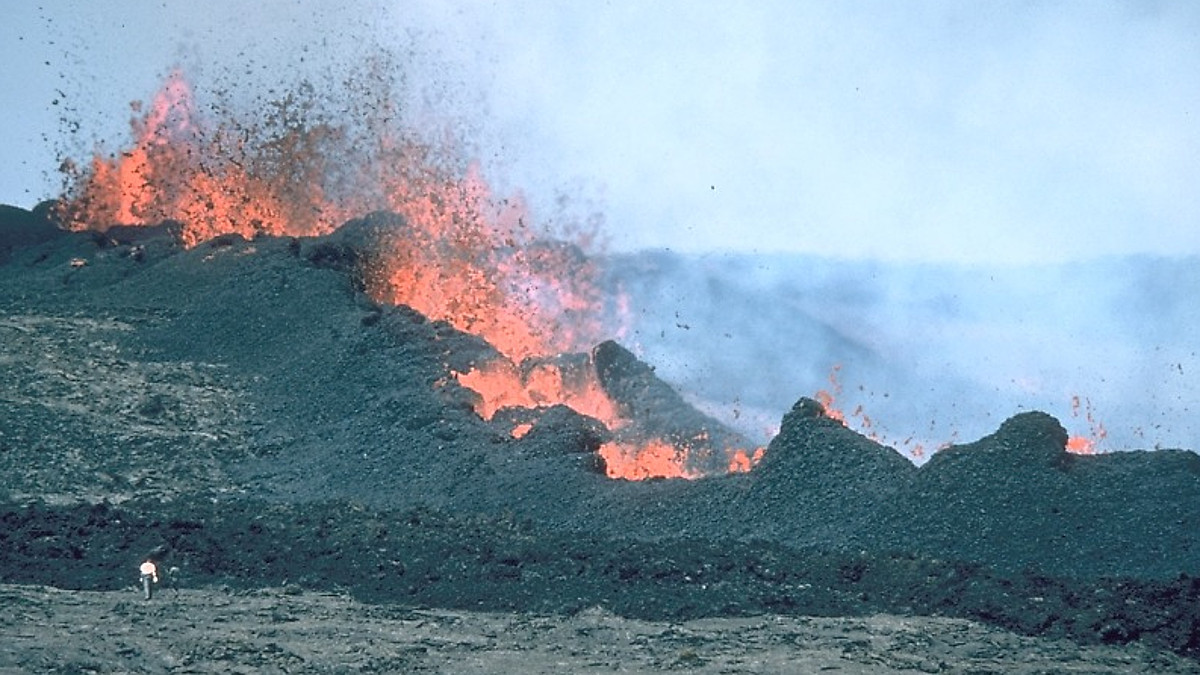 Lava fountains from fissure vents of the 1984 eruption of Mauna Loa. USGS: "Referred to as the 2,900-m vents, they are 19 km east of the original outbreak point that began within Moku‘āweoweo caldera about 36 hours earlier. Six separate structures eventually formed around the vents, including a cinder cone at the uprift end and a lava shield at the downrift end. The most productive vent along this fissure is in upper left. Note person in lower left." (Credit: Griggs, J. D.)

VOLCANO WATCH: Learning From The 1984 Eruption Of Mauna Loa

HAWAIʻI ISLAND - Scientists take a look back at the most recent eruption of Mauna Loa volcano, decades ago, and what was learned.

(BIVN) – Mauna Loa Volcano is not erupting. “Rates of seismicity at the summit remain slightly elevated and above long-term background levels,” the USGS Hawaiian Volcano Observatory wrote in its most recent weekly update. “Other Mauna Loa monitoring data streams show no significant changes that would indicate increased volcanic hazard at this time.”

Mauna Loa, the largest active volcano on Earth, has erupted 33 times since its first well-documented eruption in 1843. Intervals between eruptions ranging from months to decades, with the last eruption in 1984.

That most recent eruption is the subject of this week’s Volcano Watch article, written by U.S. Geological Survey Hawaiian Volcano Observatory scientists and affiliates:

The most recent page in Mauna Loa’s eruptive history was written in 1984. The eruption began in March of 1984, about a decade after the 1975 summit eruption (the topic of last week’s “Volcano Watch” article). Here’s a quick look at how the eruption proceeded and its impacts on residents as gleaned from contemporaneous newspaper accounts.

Inflation and earthquake activity ramped up prior to Mauna Loa’s 1984 eruption, so much so that in June of 1983, the USGS Hawaiian Volcano Observatory (HVO) indicated that an eruption could occur during the following year, though the exact timing was unknown.

Increased earthquakes and tremor, a type of seismic signal associated with magma movement, began mere hours before glow was observed at the summit of Mauna Loa at 1:25 a.m., HST, on March 25, 1984. A few hours later, the eruption migrated to vents lower on the Northeast Rift Zone of the volcano. Vent locations and lava flow directions weren’t known until HVO was able to conduct an overflight at dawn.

For the next three weeks, multiple lava flows slowly advanced in a northeast direction towards Hilo town. Much of the state was impacted by vog – volcanic air pollution.

HVO monitored Mauna Loa’s 1984 eruption from the ground and air, but adverse weather would sometimes prevent visual observations, and therefore eruption updates. Heat released during the eruption caused convective currents resulting in local thunderstorms and snowfall in the vent region.

Though lava flows did not cross it, the Saddle Road (Highway 200) remained closed during the 1984 eruption. Eruption spectators caused traffic congestion in Hilo, and some risked their safety to trespass into the closed area.

Some power poles and lines were destroyed by a lava flow, impacting electrical service to a relay station and the National Oceanic and Atmospheric Administration (NOAA) Mauna Loa Observatory.

HVO worked closely with Hawaii County Civil Defense Agency (CD), which planned to use a tiered system to convey to Hilo residents whether they would need to evacuate – Condition 1: Be on alert status and prepared to evacuate within 36 hours. Condition 2: Flow anticipated within 24 hours, begin evacuating. Condition 3: Complete evacuation and secure the area.

Technological advances since 1984 have improved HVO’s monitoring and communication capabilities. For example, HVO’s webcam network currently provides near real-time images of remote areas of Mauna Loa’s summit and rift zones. This network will be useful in quickly evaluating when the outbreak occurs, where the vents are located, and directions of lava flows. 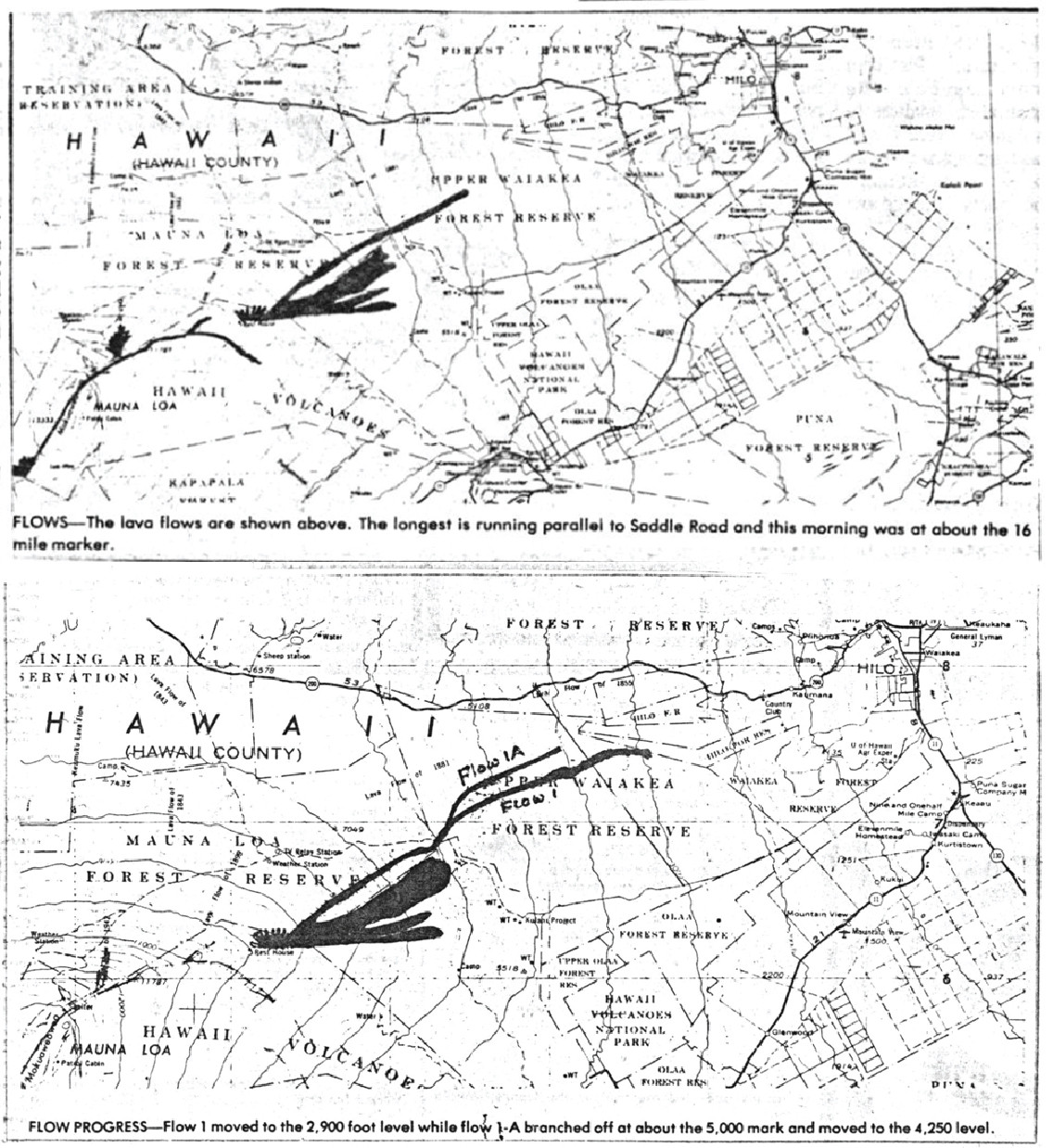 During Kīlauea’s decades-long Pu‘u‘ō‘ō eruption, HVO developed a method to create detailed lava-flow maps within hours of data collection. Hundreds of thermal and visual images collected during an overflight are stitched together to create a map showing lava flow extents and where lava flows are most active; the thermal maps can also reveal lava tube development.

Modern digital elevation models of the ground surface can be used to forecast future lava-flow paths downslope, a technique refined during the 2018 lower East Rift Zone eruption of Kīlauea.

HVO now shares data and information in near real-time on HVO’s public website. This includes webcams, maps, and multimedia, as well as HVO’s other monitoring datasets that inform us of earthquake activity, ground deformation, and volcanic gas emissions.

The public can also subscribe to the USGS Volcano Notification Service for email notifications about volcanic activity in Hawaiʻi. The Hawai‘i Interagency Vog Information Dashboard is another valuable resource, providing information on gas hazards that can impact much of the state during an eruption.