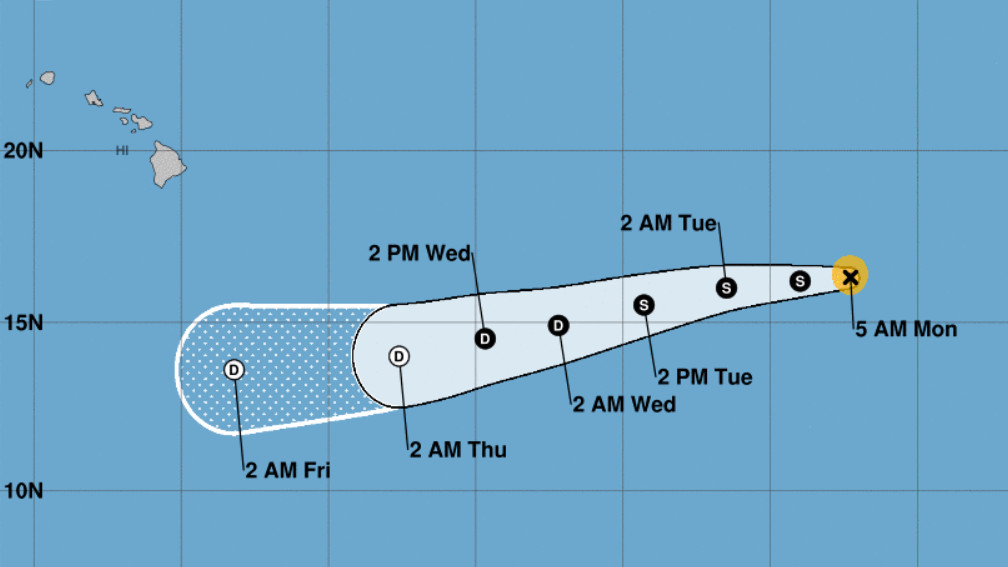 HAWAIʻI ISLAND - Two storms, Felicia and Guillermo, are expected to be remnants as they near Hawaiʻi by the end of the week and into the next, possibly increasing trades and showers.

(BIVN) – Rapidly weakening Hurricane Felicia was 1,510 miles east southeast of Hilo as of 5 a.m. HST, and close behind is Tropical Storm Guillermo at 2,415 miles east of Hilo.

Both storms are in the Eastern Pacific and are expected to weaken as the move west, becoming remnants as they near Hawaiʻi in the Central pacific.

Also, as far as thr storm’s impact to marine conditions, local forecasters say Felicia “will not produce large surf due to limited fetch. However, Felicia could bring in some small to moderate mid period surf mainly along the east facing shores of the Big Island later this week.” 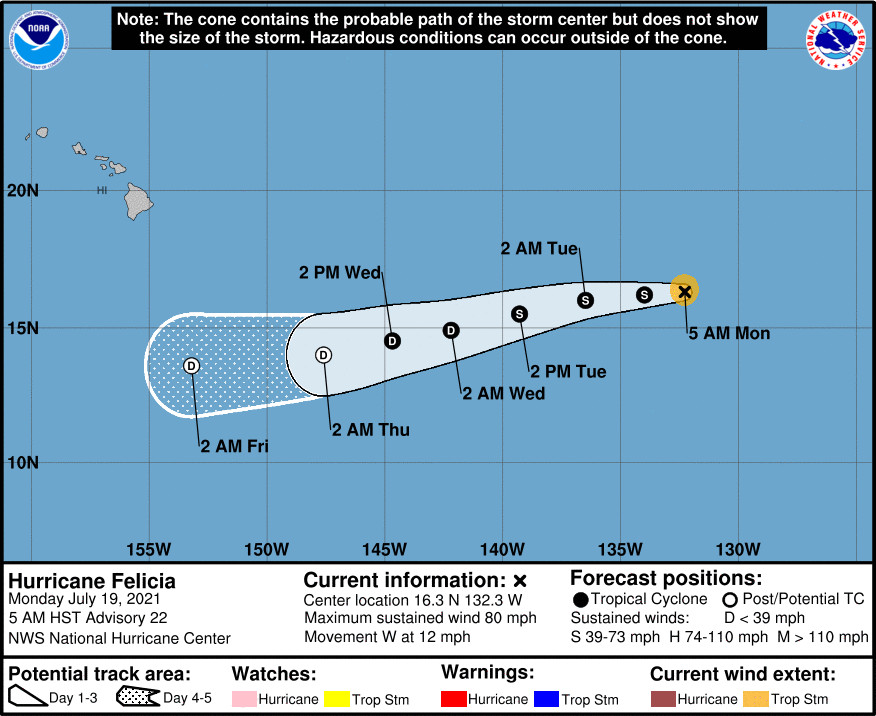 Hurricane Felicia’s maximum sustained winds have decreased to near 80 mph with higher gusts. From the National Hurricane Center in Miami:

Felicia continues to rapidly weaken as it heads toward the Central Pacific. Satellite images show a shrinking area of deep convection that is now generally confined to the northeast quadrant of the circulation. The Dvorak classifications continue to fall, and a blend of the latest estimates from TAFB, SAB, and CIMSS at the University of Wisconsin support lowering the initial intensity to70 kt, and even that seems generous.

The weakening and very compact storm is surrounded by dry mid-level air. This stable environment, cool 25 C SSTs, and increasing wind shear should cause the rapid weakening trend to continue. Felicia is forecast to weaken to a tropical storm later today and a remnant low in a few days when it expected to be in an environment of about 40 kt of northwesterly shear and very dry air, which will likely cause all of the deep convection to dissipate. The NHC intensity forecast is lower than the previous one, and in line with the majority of the latest guidance.

Felicia is moving westward at about 10 kt. A slightly faster westward to west-southwestward motion is expected during the next several days as Felicia, or its remnants, move in the flow on the south side of a low- to mid-level high to its north. The NHC track forecast is just a tad south of the previous one and lies close to the various consensus aids. Based on the current forecast, the weakening system is expected to cross into the Central Pacific basin by tomorrow night. 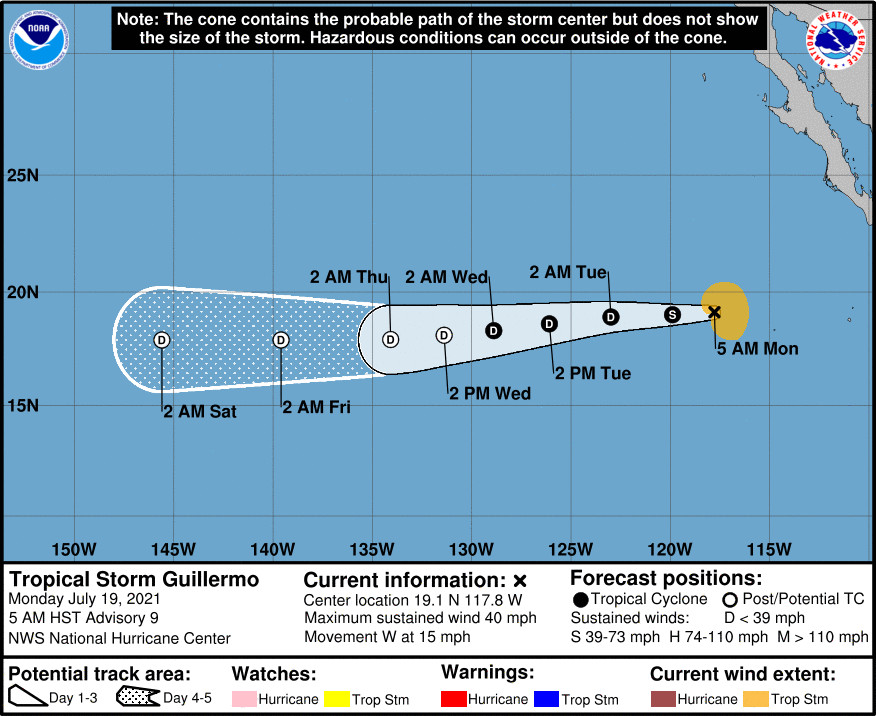 Tropical Storm Guillermo is also weakening, forecasters say, and is expected to become a depression on Tuesday, if not sooner, and degenerate to a remnant low on Wednesday night. From the National Hurricane Center discussion:

Guillermo’s satellite presentation has continued to deteriorate over the past several hours, although a new, small deep convective burst has developed just to the southeast of the circulation center. An earlier AMSR2 microwave overpass revealed a rather elongated (west to east) and ill-defined circulation with fragmented bands in the southeast quadrant. The initial intensity is lowered to 35 kt and is based on a blend of the TAFB and SAB Dvorak satellite intensity estimates.

Guillermo is moving over cooler (about 25C) water and into a progressively more stable and drier surrounding environment. The statistical-dynamical SHIPS models (GFS/ECMWF) indicate that moderate west-northwesterly shear should also contribute to the cyclone’s degeneration to a remnant low on Wednesday night. The intensity forecast now shows Guillermo becoming a remnant low sooner than the previous advisory and conforms with a consensus of the large-scale models and the SHIPS forecasts.

The initial motion is estimated to be westward, or 275/13 kt. A subtropical ridge anchored to the north of the cyclone should influence a generally westward motion through dissipation at day 5. A few of the global models are now showing the lower levels of the ridge building some to the east-northeast of the Hawaiian Islands which could induce a west-southwestward motion, or slightly left of due west, around mid-period. The NHC forecast is once again adjusted a bit to the left of the previous one and is based on the various consensus aids.