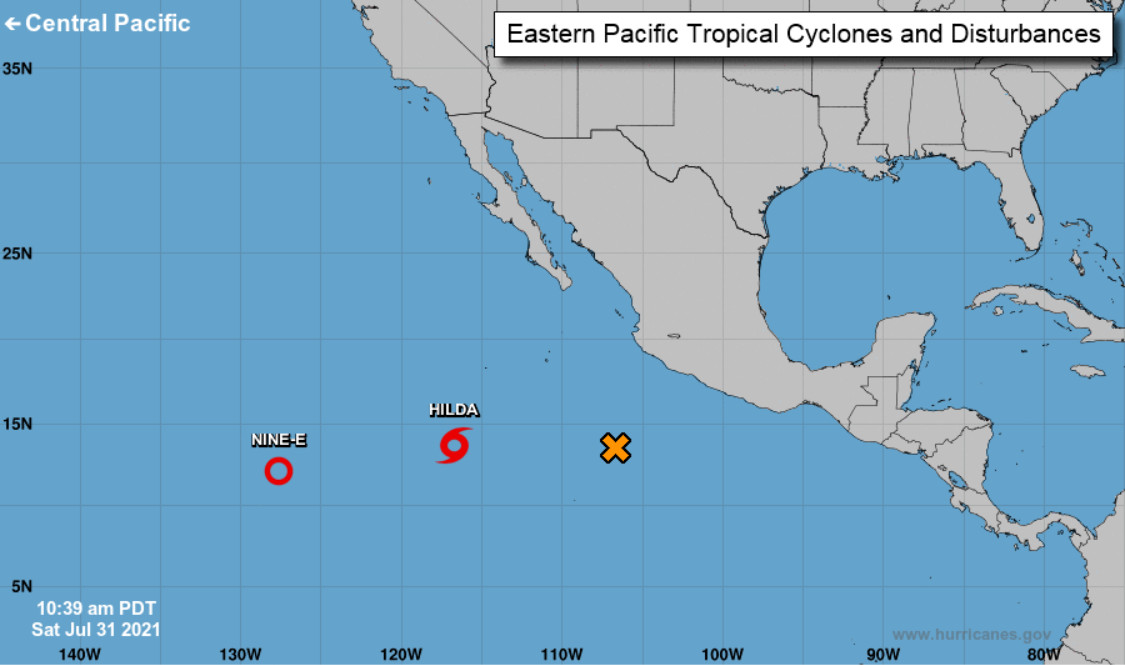 HONOLULU, Hawaiʻi - Tropical Storm Hilda and Tropical Depression Nine-E are heading west, and another tropical depression is likely to form in a couple of days

(BIVN) – Tropical cyclones are developing in the Eastern Pacific, as the hurricane season is in full swing.

Tropical Depression Nine-E is the closest to Hawaiʻi island, and as of this morning the storm was 1,900 miles east southeast of Hilo. 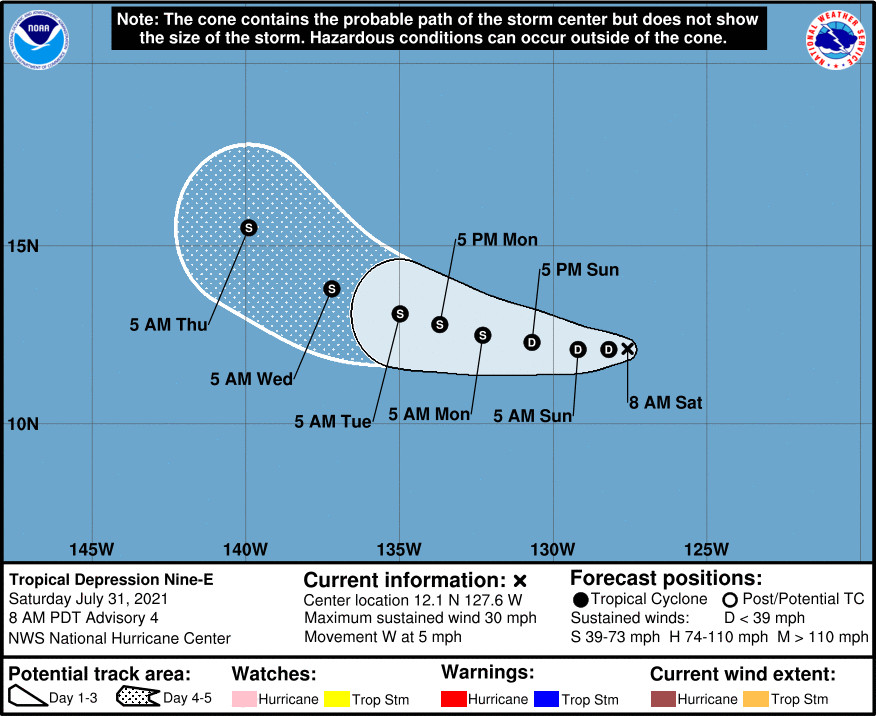 From the National Hurricane Center discussion:

The depression has become increasingly elongated west-to-east since the previous advisory. Although deep convection has increased somewhat near the center, with cloud tops now colder than -70C, the convection isn’t organized very well. The initial intensity is being maintained at 25 kt until new ASCAT data arrives this afternoon.

The initial motion estimate is 270/04 kt. The latest NHC track guidance is in decent agreement on the depression moving in a slow westward direction for the next 24 hours or so, followed by a west-northwestward motion as the ridge to north of the cyclone weakens slightly. By around 72 hours, some binary interaction between the depression and rapidly strengthening Tropical Storm Hilda, located about 650 nmi to the east, is expected. However, the degree of interaction varies widely among the models. The GFS is the most extreme and takes the depression northward on days 4 and 5, with the ECMWF being the weakest, showing little if any interaction and keeps the cyclone moving generally westward through 120 h; the other global and regional models lie somewhere in between these two extremes. For now, the new official NHC track forecast was only nudged slightly northward, and lies inside the southern edge of the guidance envelope near the TVCE consensus model.

The depression’s future intensity and existence depends heavily on the track over the next 5 days. A more westward motion would keep the cyclone over warmer water and in a better upper-level flow regime. In contrast, a sharp northward motion, as per the GFS solution, would place the system over colder water and within strong vertical wind shear. Another negative factor is the effect of intensifying Hilda to the east, which has started to draw in the southerly/southwesterly cross-equatorial inflow away from TD-9E. This deflection of the low-level flow eastward away from the depression could result in the cyclone’s cyclone getting stretched out/elongated east-to-west even further, which would induce weakening or even dissipation of the cyclone. For now, the previous intensity forecast is being maintained for this advisory until the track model guidance comes into better agreement, and the interactive effects of Tropical Storm Hilda become clearer.

Behind Nine-E is Tropical Storm Hilda. 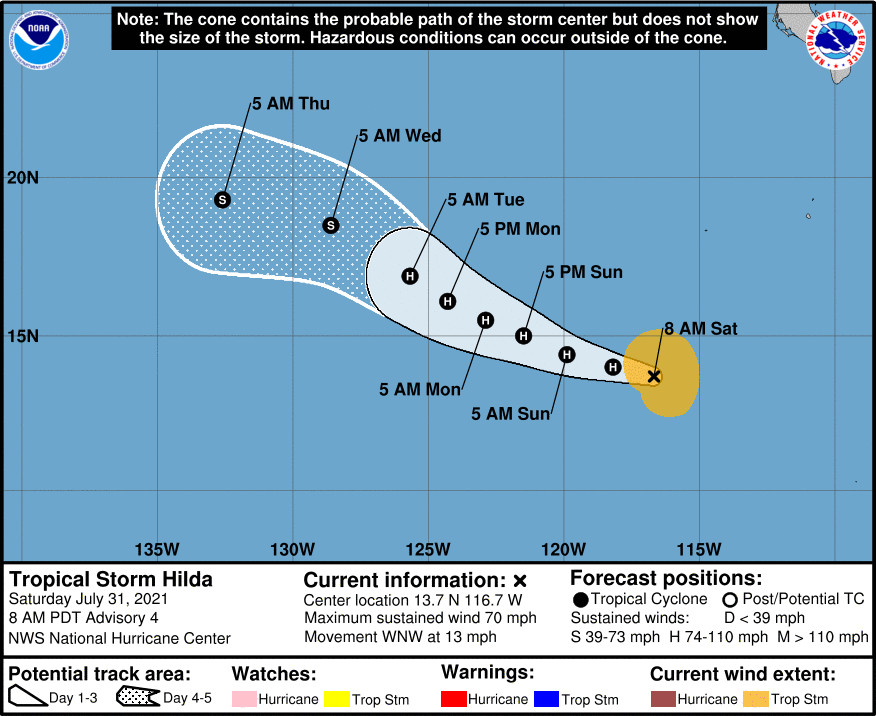 From the National Hurricane Center discussion:

Hilda is strengthening quickly this morning. Satellite images show an eye feature trying to form, and convection has deepened and become increasingly symmetric around the center. The latest Dvorak estimates supported raising the initial intensity to 55 kt at 12Z, and since Hilda continues to organize, the initial intensity is set a little higher at 60 kt for this advisory. This makes Hilda just below hurricane strength.

The current favorable environmental conditions of low wind shear, high amounts of moisture, and warm SSTs should continue to allow Hilda to intensify during the next day or so. In addition, given that Hilda now has a tight inner core, rapid intensification (RI) is a decent possibility, and the SHIPS RI index now shows a 30 percent chance of that occurring during the next 24 hours. In a couple of days, however, decreasing moisture and progressively cooler SSTs should end the strengthening trend and gradually cause weakening during the remainder of the forecast period. The NHC intensity forecast is above than the previous one in the short term and it lies at the high end of the model guidance. The long term forecast is largely similar to the previous one and lies near the middle of the guidance envelope.

Hilda is moving west-northwestward at 11 kt. A subtropical ridge should keep the storm on a general west-northwest heading during the next several days, but there could be some interaction with Tropical Depression Nine-E to the west and a low pressure area to the east that could cause slow downs and wobbles in the future track. There is a fair amount of spread among the models, especially at the longer range forecast times, but the latest consensus models are right on top of the previous track. Therefore, the NHC track forecast is largely just an update of the previous one.

Forecasters also say there are showers and thunderstorms showing signs of organization in association with a broad area of low pressure located about 400 miles southwest of the coast of southern Mexico. “Continued gradual development of this system is expected, and a tropical depression is likely to form in a couple of days before environmental conditions become less conducive for development,” the National Hurricane Center says, with a 60% chance of formation in the next 48 hours.