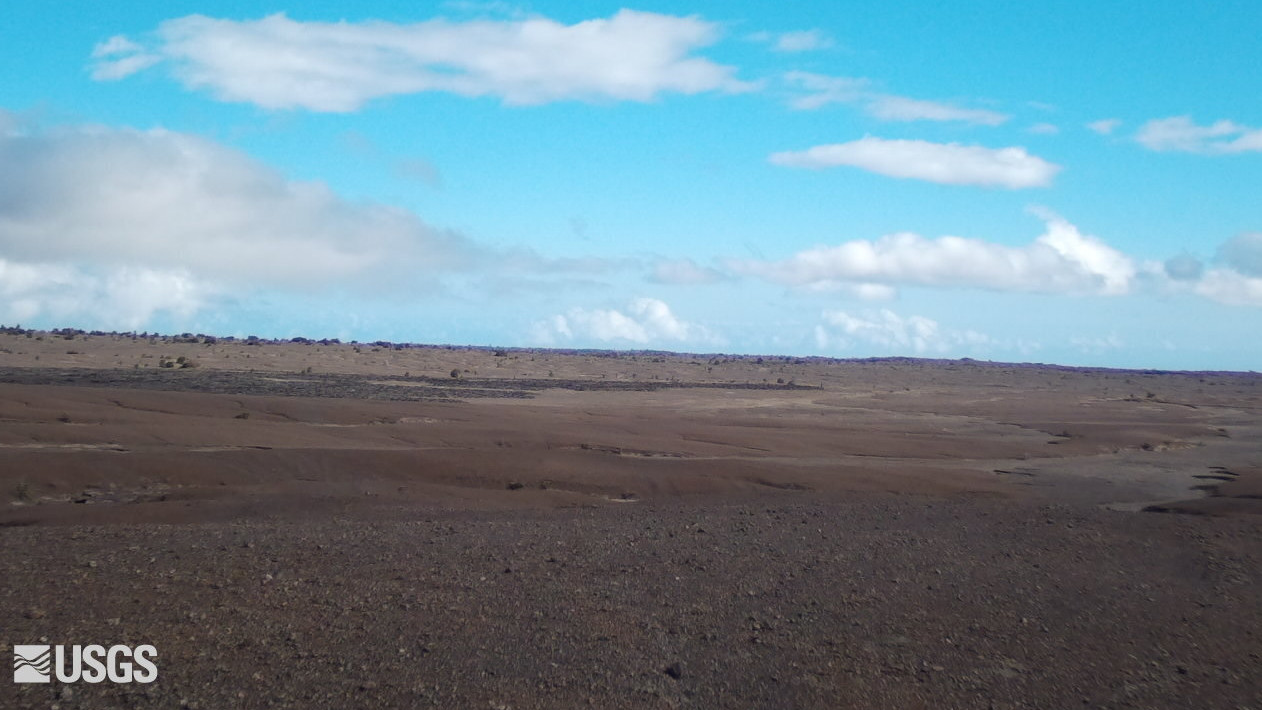 HAWAIʻI VOLCANOES NATIONAL PARK - Scientists explain how the start of both events are identical, yet we can't be certain that an intrusion will lead to an eruption. 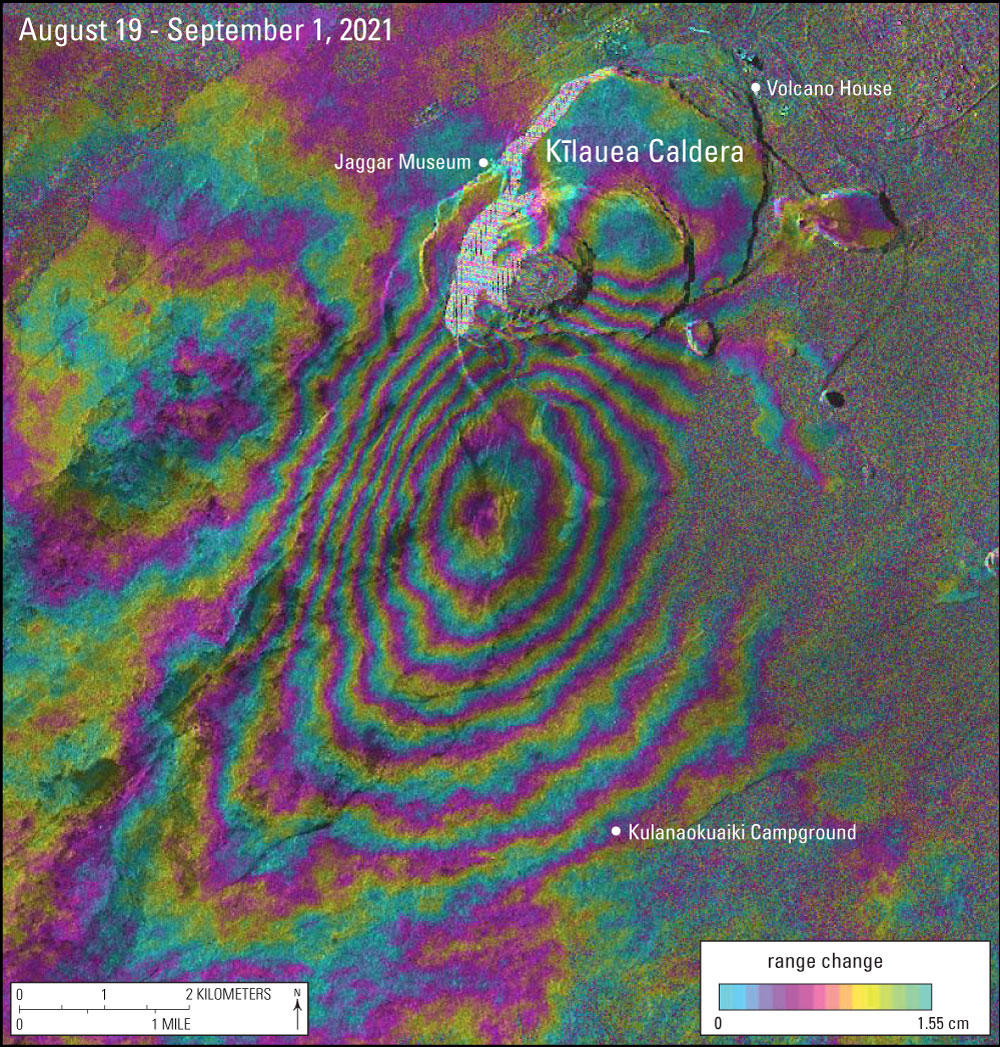 USGS: “This Interferometric Synthetic Aperture Radar (InSAR) interferogram is derived from two passes of the Italian Space Agency’s COSMO-SkyMed satellite, on August 19 and September 1, 2021. The rainbow patterns (fringes) show the motion of the surface of Kīlauea volcano between the two acquisition dates, in response to an intrusion of magma into the south caldera region that occurred between August 23 and August 31, 2021. Each cycle of color represents 1.55 cm (0.6 inches) of change in distance between the satellite and the ground (range change). The satellite looks at the ground at an angle of about 40 degrees off-vertical, so both horizontal motions and uplift/subsidence contribute to range change, complicating conversions between range change and ground motion. This also causes the location of maximum range change to be shifted slightly to the east of where the maximum uplift occurred (given this particular satellite flight path). Nonetheless, the interferogram shows a maximum of 14 cm (5.5 inches) of range change, which could be generated by 18 cm (7 inches) of uplift.”

(BIVN) – Kīlauea is not erupting, and the USGS Volcano Alert level remains at ADVISORY following a brief upgrade to WATCH one week ago.

We know that when a volcano erupts, molten red rock makes it to the surface, while during an intrusion it doesn’t. The difference between the two processes, if we depend on seismicity (earth shaking) or deformation (changes in ground surface) instrumentation, is not obvious. The events during the start of either are identical. But we can’t be certain that an intrusion will lead to an eruption.

What are symptoms leading up to an eruption? The main player in monitoring volcanoes is seismicity—the frequency and magnitude of earthquakes. When magma enters the volcanic edifice, it accumulates and makes space for itself by compressing many tiny void spaces. Continued filling by magma creates pressure on the walls of reservoirs, causing slip, faults, or cracking in the surrounding brittle rock. All these motions result in the generation of earthquakes.

Ground deformation may precede, accompany, or follow increased seismicity. We track changes in tilt—an adjustment of the surface of a volcano as magma moves into, or through, it. Networks of Global Positioning System (GPS) sensors spread across our volcanoes also detect minute changes in latitude, longitude, and elevation that helps pin point where deformation is occurring in near real-time.

Satellite data is another part of our toolkit: Interferometric Synthetic Aperture Radar (InSAR) is an effective way to measure changes in land surface elevation, providing island-wide coverage and helps monitor our volcanoes. As magma intrudes underground, it can begin to deform the surface. The InSAR satellite is sensitive enough to record changes of a few centimeters at the volcanoes’ surface outlining areas where magma is moving near the surface.

So what happened last week? At 4:30 p.m. HST on August 23, HVO seismologists noted a flurry of earthquakes beneath the south caldera region at the summit of Kīlauea. This increase in earthquakes was accompanied by an increase in tilt at our Sandhill station. At 1:30 a.m., on August 24, the seismicity ramped up dramatically. Our interpretation was that magma was on the move.

Based on the above sequence of events the U.S. Geological Survey’s Hawaiian Volcano Observatory (HVO) issued a Volcano Observatory Notification for Aviation (VONA) and Volcano Activity Notice (VAN) on August 24, changing the aviation color code and volcano alert-level from Yellow/Advisory to Orange/Watch. Was the volcano going to erupt? Symptomatically, all the signs consistent with magma movement were observed, including increased seismicity and ground deformation. We took a “wait and see” approach, while we continued to closely monitor the situation. All the geologists were primed to go to the field at a moment’s notice!

Over the next 36 hours, the earthquake counts diminished, and tilt rates decreased—implying that an eruption was less likely. Based on the observed decline in activity, HVO issued a second VONA and VAN on August 26, changing the status of the volcano from Orange/Watch back to Yellow/Advisory. Making the call on whether or not a volcano is going to erupt is not easy, and Pele still seemed primed for action. 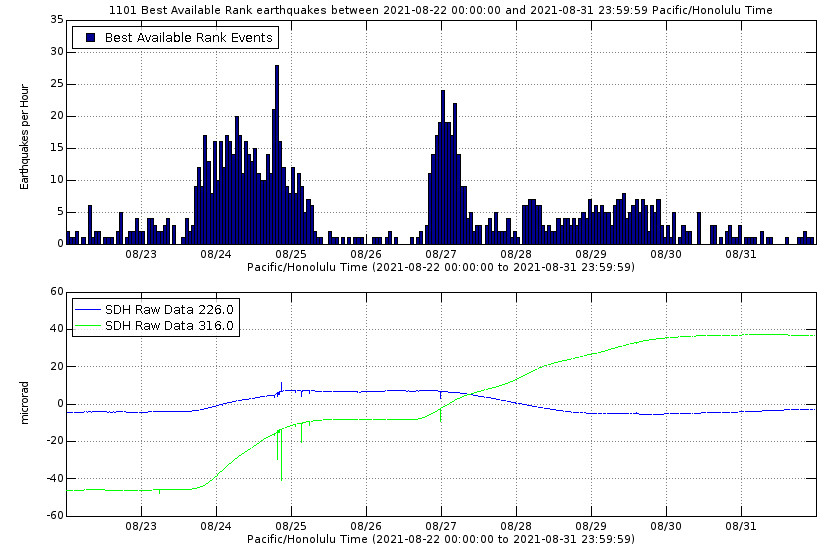 USGS: “Time-series plots of earthquake hourly counts in Kīlauea summit region (top) and tilt at the Sandhill station located southwest of Kīlauea’s caldera (bottom). These plots show the increase in activity associated with the recent south caldera intrusion at the summit of Kīlauea. The increase in the earthquake counts correlates to the influx of magma pressurizing the volcano. Increasing tilt indicates accumulation of magma. These USGS time-series plots show data from August 22 to 31, 2021.”

Subsequently, on the evening of August 26, at 6:00 p.m., tilt west of the caldera ramped up, and was followed by an increase in seismicity at 8:30 p.m. The increase in earthquakes and in deformation suggested the intrusion was still being supplied with magma. Characteristically, all the elements that contribute to an eruption were present. But notably, seismicity remained at deeper levels within the volcano, and movement of magma toward the surface was not detected.

How do we as volcanologists deal with the uncertainties of whether or not the volcano will erupt? One way is to look at past eruptive behavior. Last week’s Volcano Watch reviewed examples of past volcanic activity. Intrusions happened in the 1960s, 1970s, early 1980s, and more recently in 2006 and 2015. The only time an eruption occurred, following the many intrusions, was in 1974.

All the events of the past week had volcanologists on high alert, ready to respond as our data indicated magma was on the move. Was the volcano going to erupt? We had no idea how the story would end. We are only able to closely monitor the situation, and watch as things unfold. This time we observed an intrusion. For residents, visitors, and geologists hoping to see red rock, the intrusion was a failed eruption.