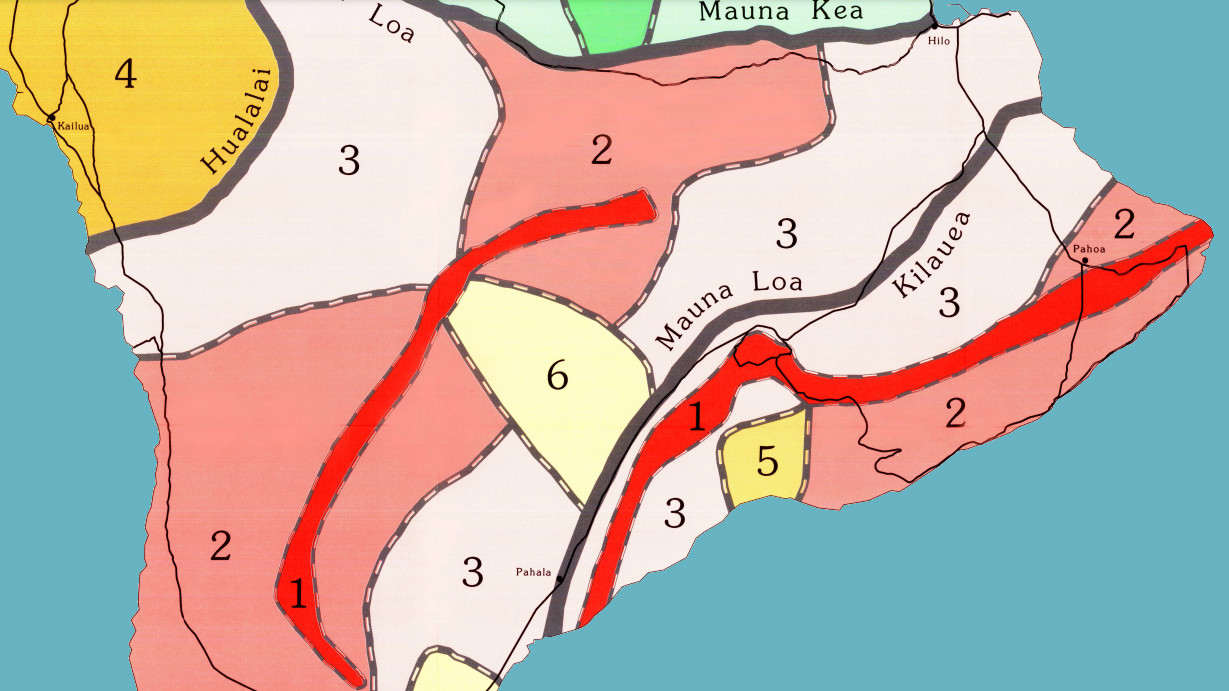 USGS photo taken during the eruption on the Lower East Rift Zone of Kīlauea back on July 10, 2018. “All 24 fissures from this eruption opened within Lava-Flow Hazard Zone 1, which is the area with the highest lava flow coverage rate,” USGS says. “The lava flows erupted from these fissures covered 13.7 square miles and destroyed over 700 homes, all within Lava-Flow Hazard Zones 1 and 2.”

(BIVN) – Kīlauea is not erupting, and its USGS Volcano Alert level is at ADVISORY. Monitoring data streams show no significant changes, scientists say.

Most residents of the Island of Hawaiʻi live on one of four potentially active volcanoes and probably have wondered about the threat of lava flows at one time or another. Interestingly, determining future threats relies on knowledge of the past. The long-term likelihood of an area being invaded by lava in the future, is estimated in two different ways based on the history of lava flow activity.

One approach uses a geologic map to calculate how much land surface was covered by lava during different periods going back into the past; the resulting numbers are called coverage rates. Another approach calculates how frequently lava flows have occurred within specific areas over time; the resulting number is a lava flow probability.

The 1992 Lava-Flow Hazard Zone (LFHZ) Map represents use of the approach based on long-term coverage rates. This is not a measure of how fast an individual lava flow advances but how fast an area is covered by lava from multiple eruptions over centuries. For example, more than one-quarter of Kīlauea volcano was covered since Hawaiians hosted the English Captain Cook visiting the islands and almost 90 percent of the volcano was covered since the arrival of Polynesians about 800–1,000 years ago. An evaluation of future activity using these coverage rates would estimate that most of the volcano will be resurfaced by new lava within the next 1,000 years.

New eruptions don’t affect coverage rates significantly, because new flows cover some of the most recent lava as well as older flows. For example, 2018 lava flowed between and over parts of the 1790, 1955, and 1960 lava flows. Therefore the “coverage” or resurfacing since 1790 didn’t increase by the full area of the 2018 flow, just by the portion that was beyond those earlier flows.

The 1992 LFHZ map shows that the highest coverage rates (and therefore hazards) are within the rift zones and summits of Kīlauea and Mauna Loa volcanoes. Almost half of LFHZ 1 (the most hazardous zone) on both volcanoes was covered since the year 1790. Coverage rates decrease away from LFHZ 1.

The other approach to estimating long-term lava flow hazards is to calculate how often a particular area is impacted by lava, also called the recurrence interval method. The lower East Rift Zone (LERZ) of Kīlauea has been overrun by lava five times since 1790—in 1790, 1840, 1955, 1960, and 2018. Those eruptions occur over a span of more than 200 years with an average of about 60 years between them.

In our application to lava flows, an average recurrence interval of about 60 years in the LERZ means that there is a 63 percent chance (3-to-2 odds again) that the next lava-free recurrence interval will be 60 years; it’s also the odds that another lava flow will affect some part of the LERZ within 60 years. The probability of a lava flow in this region during the period of 30 years would be 40 percent or odds of 2-to-3 and the probability of flooding would be a 26 percent chance (1-to-3 odds). Fortunately, the region of combined significant lava and flood hazards in the LERZ is limited to coastal flooding zones.

Lava flow hazard calculations and maps produced by the U.S. Geological Survey (USGS) are intended to inform property owners, emergency managers, and government planners of the long-term hazards posed by lava flows. The USGS Hawaiian Volcano Observatory continues to study lava flow hazards using these and other methods. For more information on Lava Flow Hazard probabilities, the following publications  (The Probability of Lava Inundation at the Proposed and Existing Kulani Prison Sites) and (Volcanic Activity and Ground Deformation Hazard Analysis for the Hawaii Geothermal Project Environmental Impact Statement) are available.