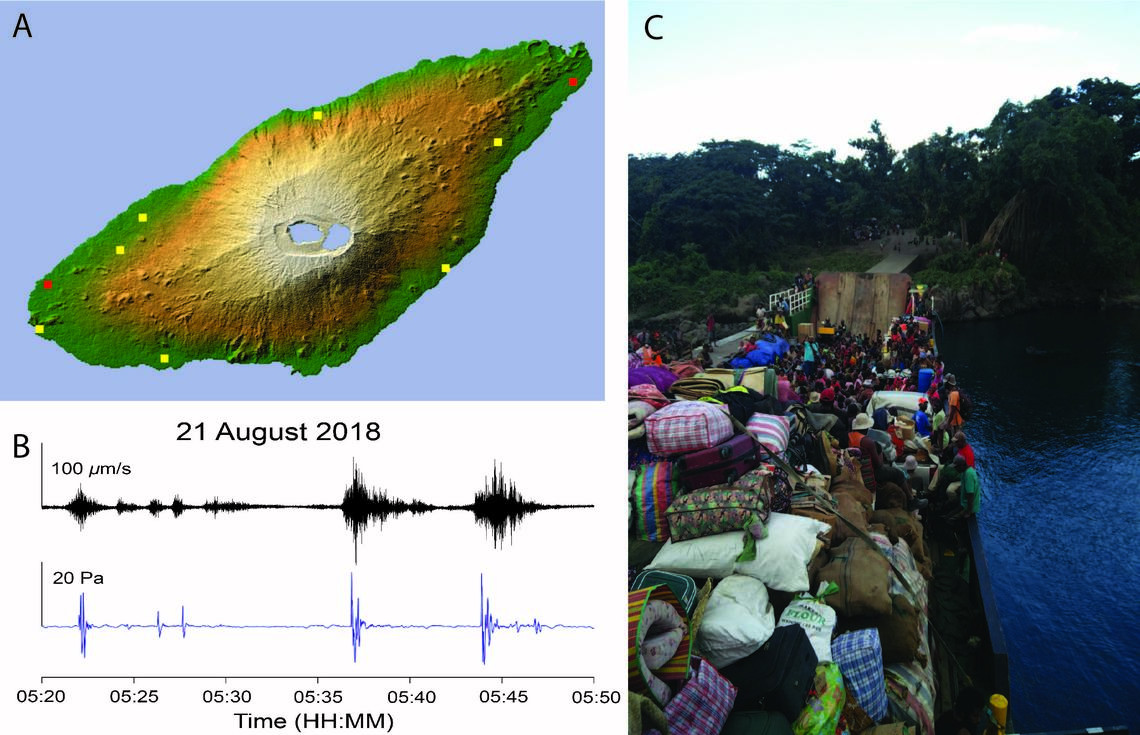 USGS: "Ambae Island is in the northern Vanuatu archipelago (Figure A, courtesy of NASA) and hosts a nested caldera at its summit. A temporary seismic-acoustic array was deployed beginning July 2018 (yellow squares). Local airports are marked by the red squares. An example record of an eruption sequence is shown in Figure B, courtesy of Iseul Park, GNS Science. The seismic (black) and acoustic (blue) records compare the data from several eruptions on August 21, 2018 (VUT Time Zone). The eruptions forced the full evacuation of Ambae (Figure C) to neighboring islands of Maewo and Esperitu Santo." (Photo is courtesy of Graham Leonard, GNS Science, taken on August 18, 2018.)

HAWAIʻI ISLAND - In the summer of 2018, as Hawaiʻi island residents experienced the lower East Rift Zone eruption of Kilauea, the people of Ambae Island were also forced to evacuate.

(BIVN) – This week’s Volcano Watch article, written by U.S. Geological Survey Hawaiian Volcano Observatory scientists and affiliates, focuses on the eruptions on the island of Ambae, in Vanuatu. From the USGS HVO:

The Pacific is home to dozens of active volcanic systems including the massive Hawaiian shield volcanoes Kīlauea and Mauna Loa. Most basaltic shield volcanoes in the Pacific are related to the hotspots that created the Hawaiian Islands and many of the Polynesian and Micronesian island chains.

The island of Ambae, in Vanuatu, is a large basaltic shield volcano that lies along the subduction zone between Fiji and Papua New Guinea in the South Pacific. Since 1995, Ambae has experienced explosive episodes once or more per decade. In physical form, Ambae looks like a smaller version of Mauna Loa. The island is 9 miles (14 km) wide and 24 miles (39 km) across (see figure) with gentle slopes and dense vegetation. Like Mauna Loa, the summit has more than one large crater.

The craters at Ambae are filled with colorful lake water which testifies to a deep system of heated, sulfur-rich groundwater beneath the summit. At Ambae, these large crater lakes and associated groundwater contribute to a specific style of activity called phreatic or phreatomagmatic eruptions.

Ambae had two strong episodes of moderate to large explosive eruptions in 2017–2018 after mostly minor activity during the previous decade. The first episode occurred in October 2017 and covered the island with ash, gas, and acid rain causing crop damage, water fouling, and respiratory concerns. These impacts, compounded by a lack of new rainfall to replace affected drinking water, forced the evacuation of about 11,000 residents beginning in late 2017. Eruptive activity waned shortly after, which prompted the local population to begin to return to the island around the start of the new year.

Eruptions and their impacts in Vanuatu are monitored by the Vanuatu Meteorology and Geohazards Department (VMGD) using transmitted seismograph (ground shaking) data and periodic island site visits by volcano scientists. After the first episode, low-level volcanic activity continued with minor gas and ash discharge from the volcano. Remobilized ash also turned into mudflow lahars throughout the rainy season, from October to April.

In July and August 2018, VMGD and a New Zealand-based research team arrived at Ambae to collect ash and water samples, acquire seismograph and acoustic (sound) data, and document the impacts of the eruptions. By coincidence, the field teams and local residents were met by new and increasing explosive eruptions. The largest of these eruptions produced ash plumes over 9,100 meters (30,000 ft) above sea level which affected South Pacific airplane traffic.

The newly deployed seismic-acoustic array captured most of the second phase of eruption and these data were subsequently analyzed by researchers from New Zealand, Vanuatu, and the United States. The data showed in detail the timing and size of explosions on the volcano. An example time record for one of the eruptions is shown in the figure which documents a previously unrecognized event. The data show not only the ground shaking from the eruption but also the sounds of the volcano. At present, monitoring in Vanuatu is ably conducted by real-time observation of transmitted seismic data to the remote monitoring center in the capital of Port Vila. Acoustic observation of Vanuatu volcanoes is in its infancy, but the temporary deployment illustrates the value of such data for monitoring purposes.

The new eruption phase ultimately forced the second full evacuation of Ambae in August 2018. Interestingly, while the 2018 eruption on the Island of Hawai‘i received global attention, the Ambae eruption had a larger global impact due to the huge amount of gas released. Fortunately, the eruption ended later that year and local Ambae residents were able to return safely to their homes. In late September 2019, scientists returned to Ambae to remove the temporary seismic and acoustic stations. Local farmers, who had returned earlier in the year reported abundant crops, possibly a result of the newly rejuvenated ash-rich soils.