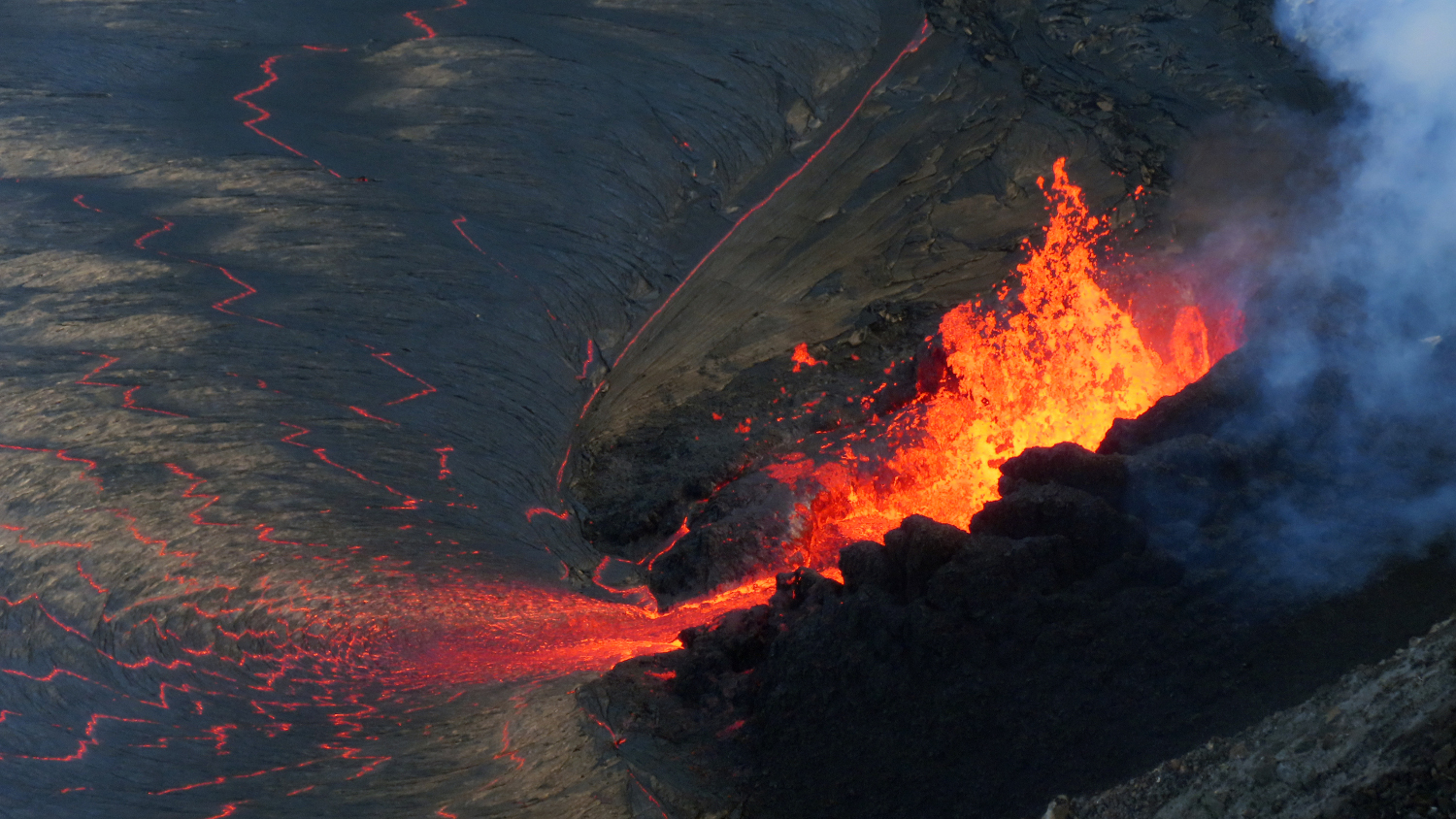 USGS: "The west vent fountain in Kīlauea's ongoing Halema‘uma‘u eruption was 12 m (39 ft) above the lava lake surface in the late afternoon of October 6, 2021. This photo was taken by USGS geologist K. Lynn from the northwest rim of Halema‘uma‘u looking south." 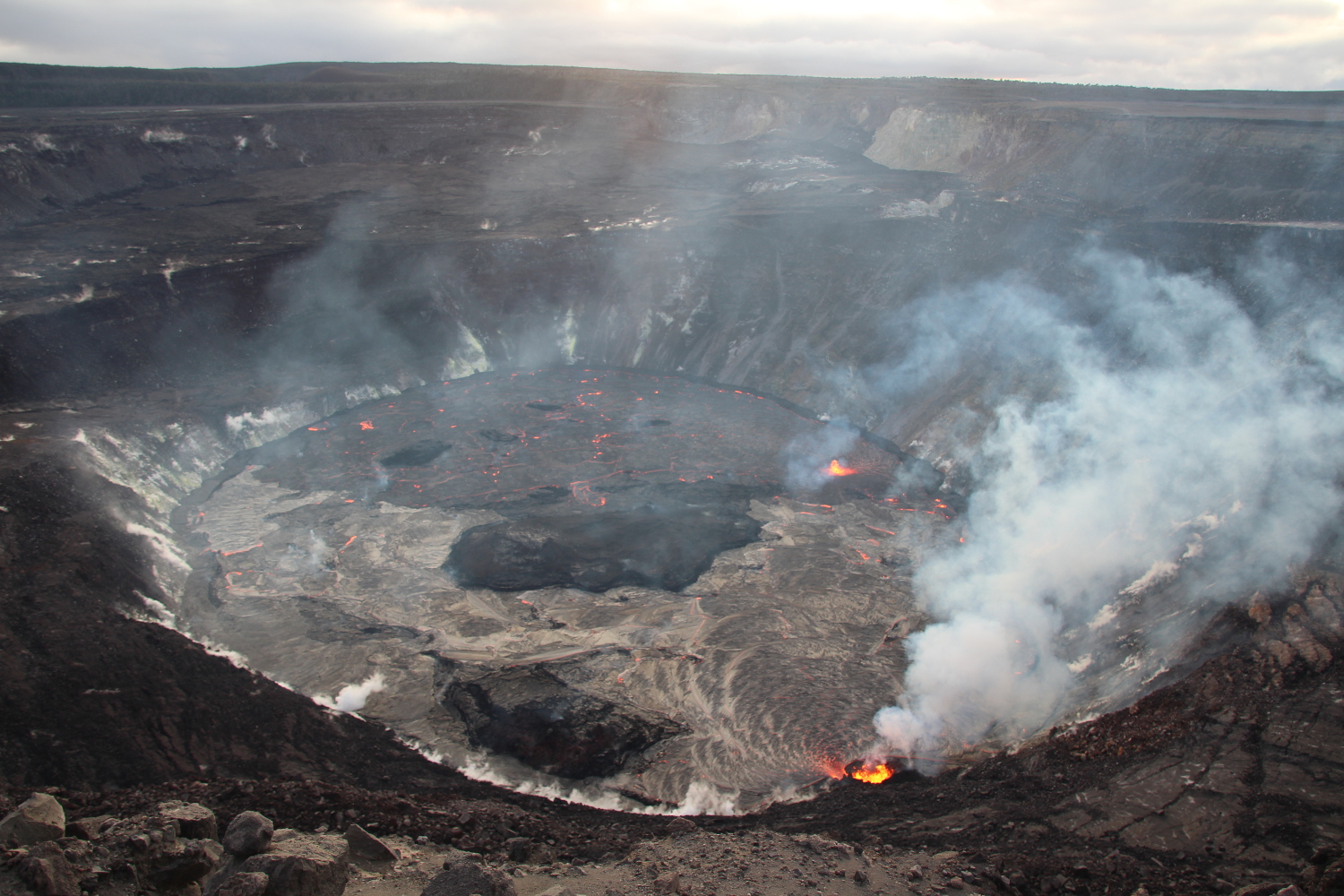 USGS: “A view of the lava lake in Halema‘uma‘u crater, at the summit of Kīlauea, taken from the western crater rim looking east. The western vent (lower right) remains the dominant source of fountaining. One fountain remains active in the south portion of the lake (center right). The silver-grey lava comes from the western vent, and the dark black lava comes from the south fountain.” (USGS photo by N. Deligne taken on October 5, 2021.)

(BIVN) – The eruption of Kīlauea continues at the volcano summit, as lava continues to erupt from two vents – one along the floor of Halemaʻumaʻu crater, and one on the crater’s western wall.

From the USGS Hawaiian Volcano Observatory update posted on Thursday:

Halemaʻumaʻu Lava Lake Observations: Lava continues to erupt from two vents within Halemaʻumaʻu crater. Over the past 24 hours, the lava lake level rose approximately 1 meter (3 ft) with a total rise of about 32 meters (105 ft) since lava emerged on September 29. The total thickness of lava filling Halemaʻumaʻu is now 258 meters (846 ft) with a lake surface elevation of approximately 775 meters (2543 ft) above sea level. The west vent continues to have the most vigorous fountain with sustained lava fountain heights of about 12 meters (39 ft). The lava lake is now above the base of the vent and the fountain has built a spatter rampart around most of it. Another vent continues to be active in the southern part of the lake with lava fountain heights averaging 1 meter (3 ft) above the lake surface. Due to the location of vents, the lava lake is not level across its surface. Areas closer to the vent in the western part are about 2 m (7 ft) higher in elevation compared to the north and south part of the lake and 4 m (7 ft) higher than the east end of the lava lake. Crustal foundering, a process by which cooled lava crust on the lake surface sinks into the hot underlying lake lava, is observed on the active surface of the lava lake. The active lava lake surface is perched 1-2 meters (3-7 ft) above a 20-meter-wide (66 ft) ledge that extends outward to the Halemaʻumaʻu crater wall. The central island and several of the smaller eastern islets from the 2020 lava lake are now visible on the lake surface. All the smaller islets became submerged at the beginning of the eruption, but have gradually emerged since. The central island shows a dark ring marking of cooled lava from partial submersion at the beginning of the eruption.

East Rift Zone Observations: No unusual activity has been noted in the Kīlauea East Rift Zone. Ground deformation motion suggests that the upper East Rift Zone—between the summit and Puʻuʻōʻo—has been steadily refilling with magma over the past year. SO2 and hydrogen sulfide (H2S) emissions from Puʻuʻōʻō were below instrumental detection levels when last measured on January 7, 2021.

Hazard Analysis: This new eruption at Kīlauea’s summit is occurring within a closed area of Hawai’i Volcanoes National Park. Therefore, high levels of volcanic gas are the primary hazard of concern, as this hazard can have far-reaching effects down-wind. Large amounts of volcanic gas—primarily water vapor (H2O), carbon dioxide (CO2), and sulfur dioxide (SO2)—are continuously released during eruptions of Kīlauea Volcano. As SO2 is released from the summit, it reacts in the atmosphere to create the visible haze known as vog (volcanic smog) that has been observed downwind of Kīlauea. Vog creates the potential for airborne health hazards to residents and visitors, damages agricultural crops and other plants, and affects livestock. For more information on gas hazards at the summit of Kīlauea, please see (here). Vog information can be found at vog.ivhhn.org.