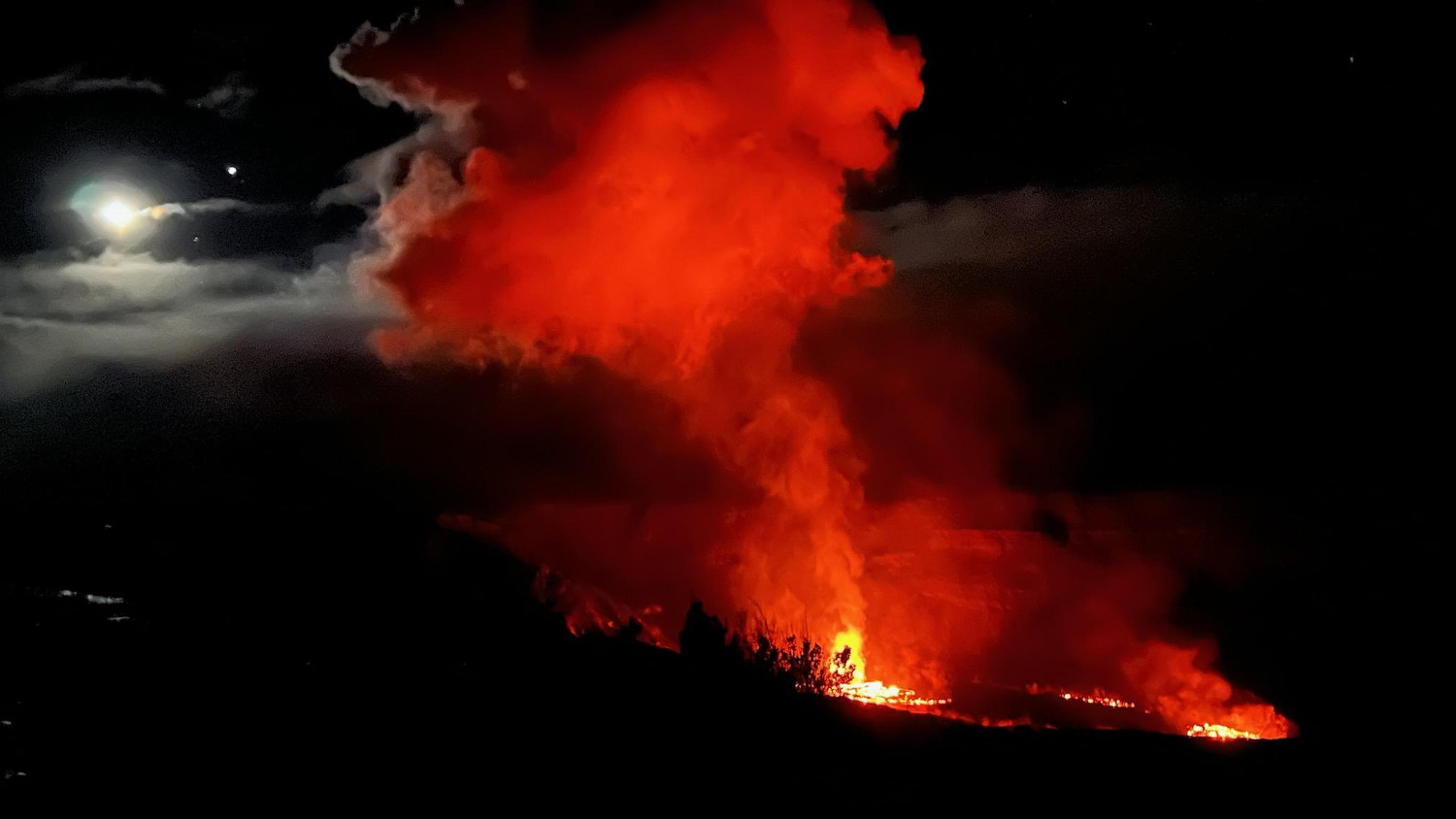 USGS: "The eruption in Halema'uma'u crater, at the summit of Kīlauea, continues. This photograph, taken on the evening of December 8 from the Keanakākoʻi overlook within Hawai'i Volcanoes National Park, shows the eruption plume backlit by the moon. The most recent measurement of sulfur dioxide (SO2) emission rates on December 9, 2021, was approximately 3,500 tonnes per day." (USGS image by C. Gansecki)

HAWAIʻI VOLCANOES NATIONAL PARK - The vent in the western wall of Halemaʻumaʻu crater remains active, and confined to the summit caldera. 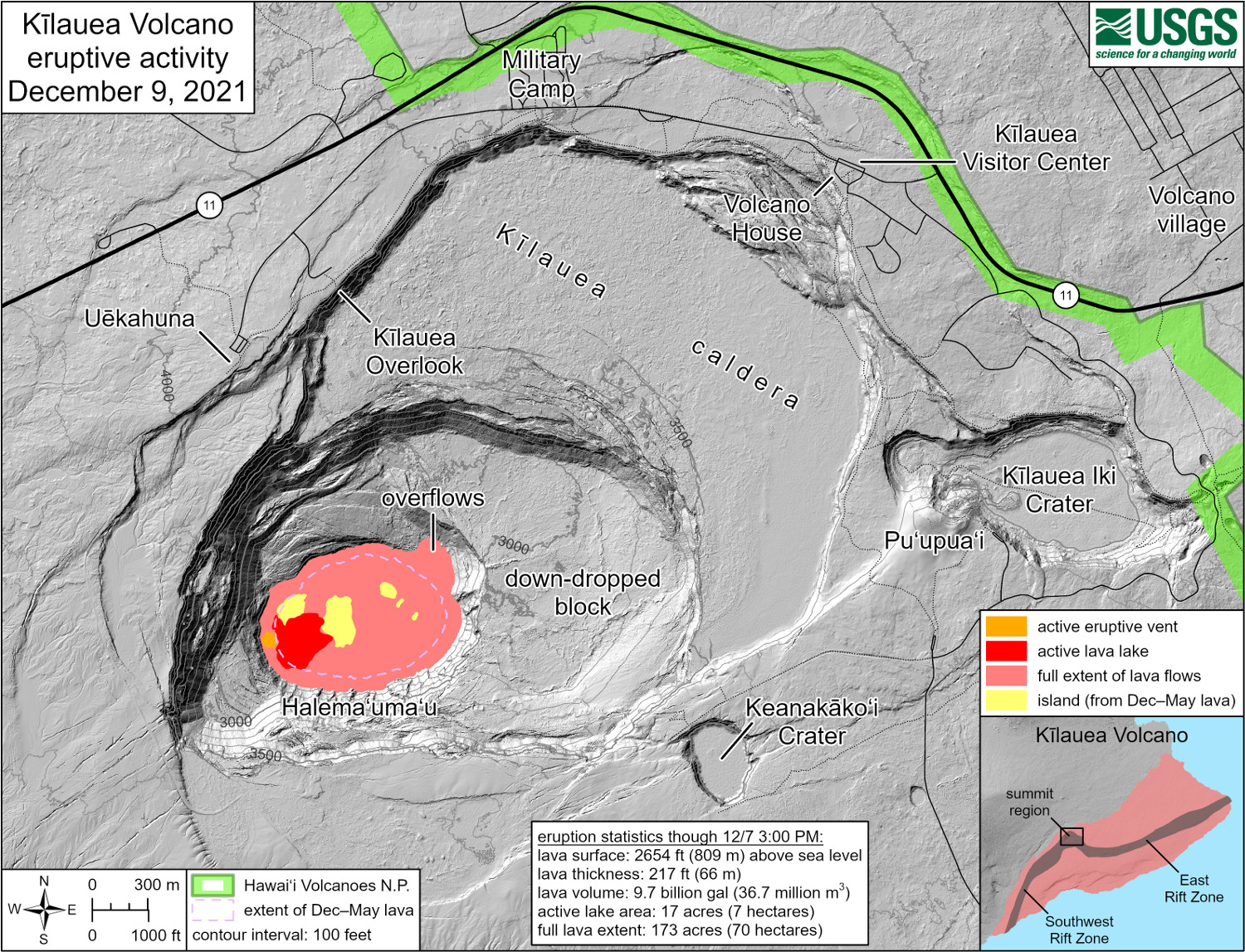 USGS: “This reference map depicts the ongoing Kīlauea summit eruption on December 9, 2021. One eruptive vent is active within Halema‘uma‘u at this time, along the western edge of the lava lake. After a recent eruptive pause, renewed lava effusion from the vent has reactivated the western end of the lava lake within essentially the same footprint as before the pause. The eastern end remains stagnant and solidified at the surface, though occasional ooze-outs around the edges serve as evidence of molten lava below the surface. Some of these ooze-outs have overflowed onto the lowest remaining down-dropped block from the 2018 collapse event within the summit caldera. This map depicts contour elevations in feet, with the surface of the active lava lake now at approximately 2,654 ft (809 m) above sea level.”

(BIVN) – The eruption of Kīlauea volcano continues at the summit, with lava emerging from a single vent in the western wall of Halemaʻumaʻu crater.

Activity has been continuous following the recent pause that lasted a few days, although scientists say it decreased slightly Wednesday evening with summit deflation, but increased around midnight with summit inflation. The most recent measurement of sulfur dioxide (SO2) emission rates on December 9, 2021, was approximately 3,500 tonnes per day.

From the USGS Hawaiian Volcano Observatory on Friday, Dec. 10:

Lava continues to erupt from a single vent in the western wall of Halemaʻumaʻu crater, supplying lava into the lava lake that is contained within the western portion of the crater. Spattering continues within a small lava pond at the vent, and sporadic ooze-outs of lava are present along the solidified lake margins. The lake has seen a total increase of about 65 meters (213 ft) since lava emerged on September 29. The total erupted volume since the beginning of the eruption was estimated to be about 30 million cubic meters (7.8 billion gallons) on November 16.

Scientists point out that currently, “active lava is visible from two public visitor overlooks in Hawai‘i Volcanoes National Park: a site along the trail between Kīlauea Overlook and Uēkahuna can see the southeastern edge of the lava lake, and a section of the Keanakāko‘i Overlook can see the eruptive vent.” 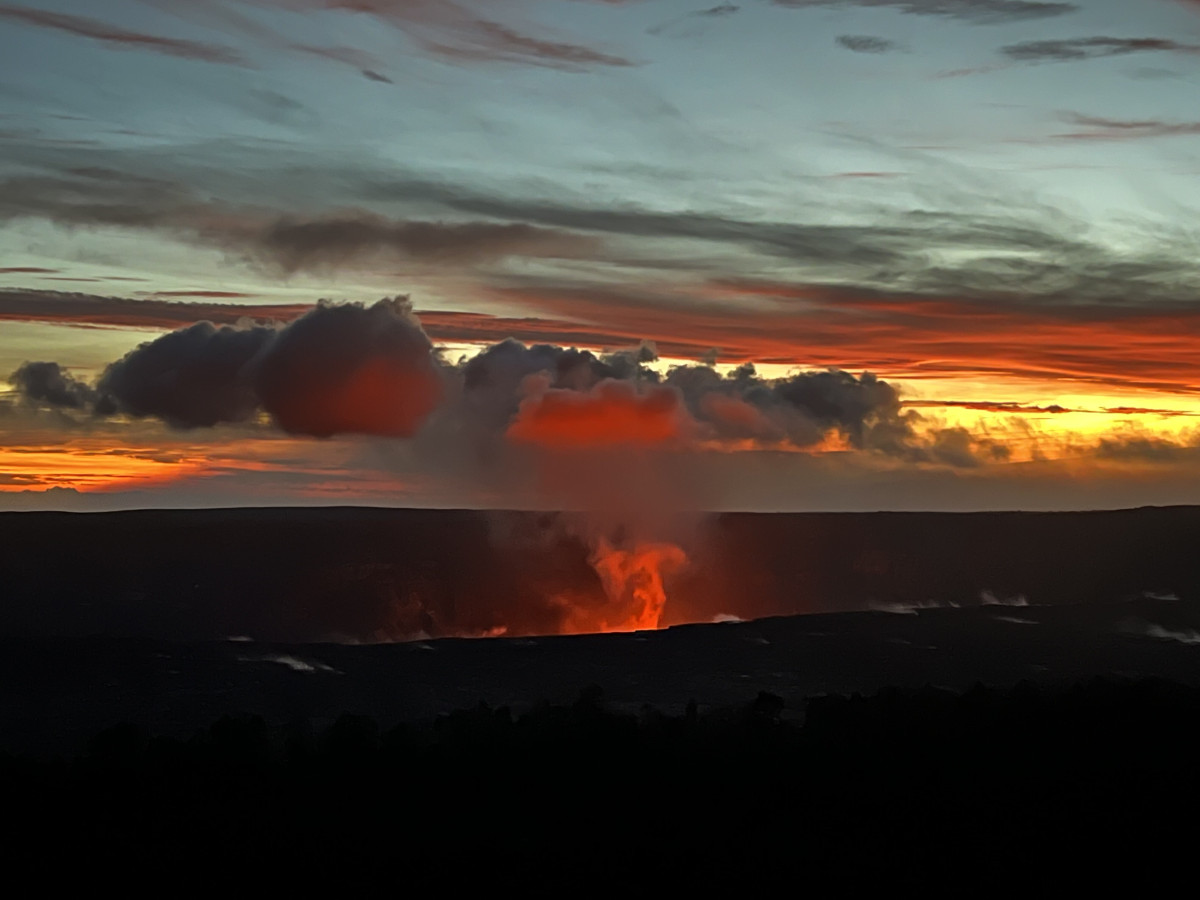 USGS: “Sunset on the evening of December 8, 2021, provided stunning views of the eruption in Halema’uma’u crater, at the summit of Kīlauea. This photograph, taken from the Keanakākoʻi overlook within Hawai’i Volcanoes National Park, looks northwest from the south rim of Kīlauea caldera. Lava continues to erupt from a single vent in the western wall of Halema’uma’u crater, feeding a lava lake that occupies the western portion of the crater, though sporadic ooze-outs of lava continue to occur along the solidified lake margins.” (USGS image by C. Gansecki)