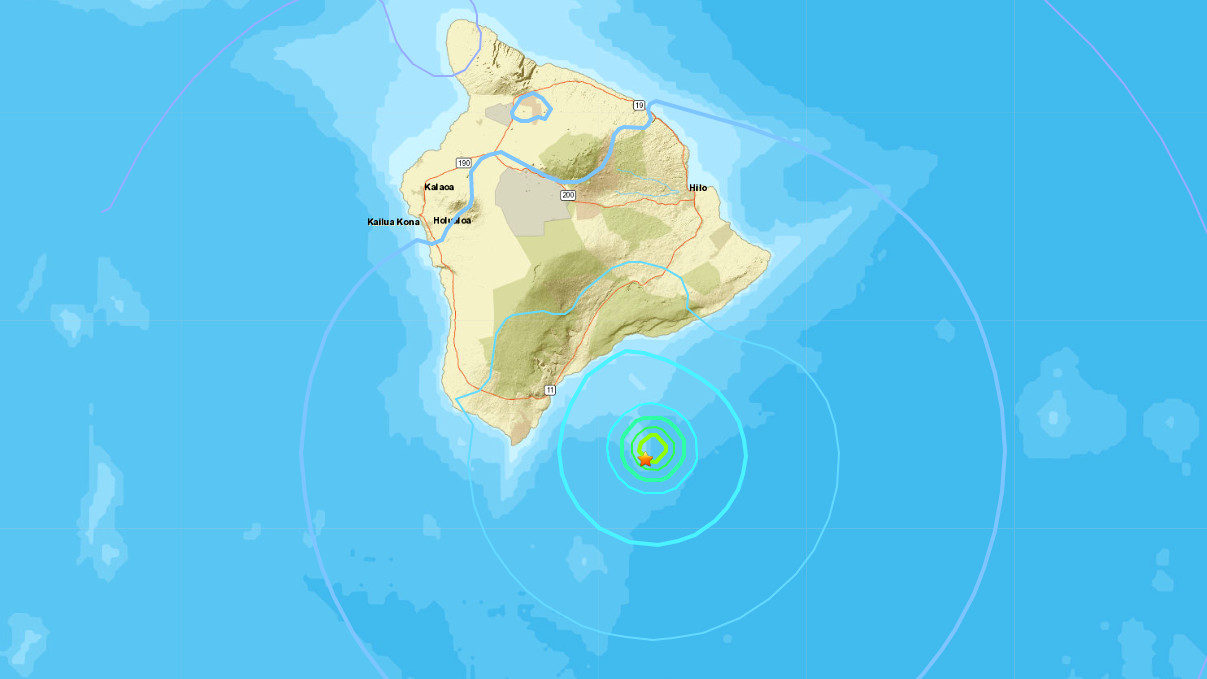 image from interactve map by USGS showing the location of the magnitude-4.9 earthquake

HAWAIʻI - The quake on Kamaʻehuakanaloa, once called Lō‘ihi volcano, was preceded by over 50 small earthquakes.

(BIVN) – A magnitude-4.9 earthquake recorded on a submarine volcano off the southern coast of Hawaiʻi island did not generate a tsunami and did not have an effect on Big Island volcanoes.

The U.S. Geological Survey’s Hawaiian Volcano Observatory (HVO) recorded a magnitude-4.9 earthquake located on Kamaʻehuakanaloa (Lō‘ihi) volcano, south of the Island of Hawai‘i on Friday, December 24, at 01:32 a.m. HST. The earthquake was centered about 42 km (26 miles) southeast of Nā‘ālehu, at a depth of 12 km (7.5 miles).

A map showing its location is posted on the HVO website at volcanoes.usgs.gov. More details are available at the National Earthquake Information Center website.

Light shaking, with maximum Intensity of IV, has been reported across parts of the Island of Hawai‘i. At that intensity, significant damage to buildings or structures is not expected. The USGS “Did you feel it?” service received over 15 felt reports within the first hour of the earthquake.

According to HVO Scientist-in-Charge, Ken Hon, the earthquake was preceded by over 50 small earthquakes on the south rift zone of Kamaʻehuakanaloa over the past two weeks. It is unknown as to whether it was caused by any volcanic or intrusive activity on Kamaʻehuakanaloa, but the earthquake had no apparent effect on Kīlauea or Mauna Loa volcanoes. Aftershocks are possible and could be felt. HVO continues to monitor Mauna Loa and other Hawaiian volcanoes for any changes.

According to the Pacific Tsunami Warning Center, there is no tsunami threat from this earthquake.

The name Lō‘ihi means “long” in Hawaiian, the USGS says on its website. The name was introduced in 1955 to describe the elongate shape of the seamount. However, Hawaiian scholars have since found that stories of “Kama‘ehu,” the red island child of Haumea (earth) and Kanaloa (sea) that rises from the deep in the ocean floor “may also be a reference to this submarine volcano”, the USGS says.