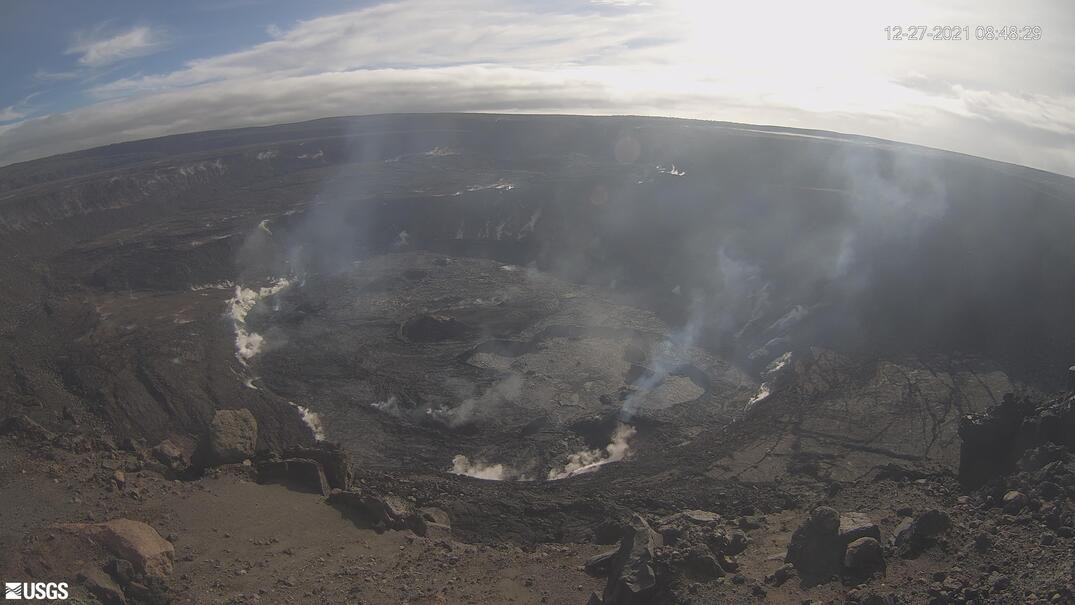 HAWAIʻI VOLCANOES NATIONAL PARK - The summit eruption of Kīlauea is currently paused, but scientists say lava effusion may resume sometime in the next 24 hours.

Activity at the west vent and lava lake in Halema‘uma‘u. Video by USGS, recorded on December 20 prior to a pause in activity.

(BIVN) –  The summit eruption of Kīlauea Volcano remains paused, scientists say, although activity may resume sometime in the next 24 hours.

The USGS Hawaiian Volcano Observatory on Monday reported that the eruption within Halemaʻumaʻu paused after lava effusion dwindled on December 25 following a strong deflationary event. “Based on similar eruptive pauses in recent weeks, the return of inflationary tilt last night suggests that lava effusion may resume sometime in the next 24 hours,” the scientists wrote. “All recent lava activity has been confined to the crater, and there are no indications of activity migrating elsewhere on Kīlauea.”

Summit Observations: Rapid inflationary tilt began just before midnight last night; the trend continues at this time and has recovered most of the tilt lost during the prior deflation. Volcanic tremor associated with the eruption is currently not detectable and earthquake activity in the summit region remains below background level. A sulfur dioxide (SO2) emission rate of approximately 5,300 tonnes per day was measured on December 24, when eruptive activity was more vigorous before the pause.

The USGS HVO says the surface of the lava lake is mostly crusted over, except for a small section north of the western vent measuring less than 50 meters (164 feet) in diameter. No unusual activity has been noted in the Kīlauea East Rift Zone.