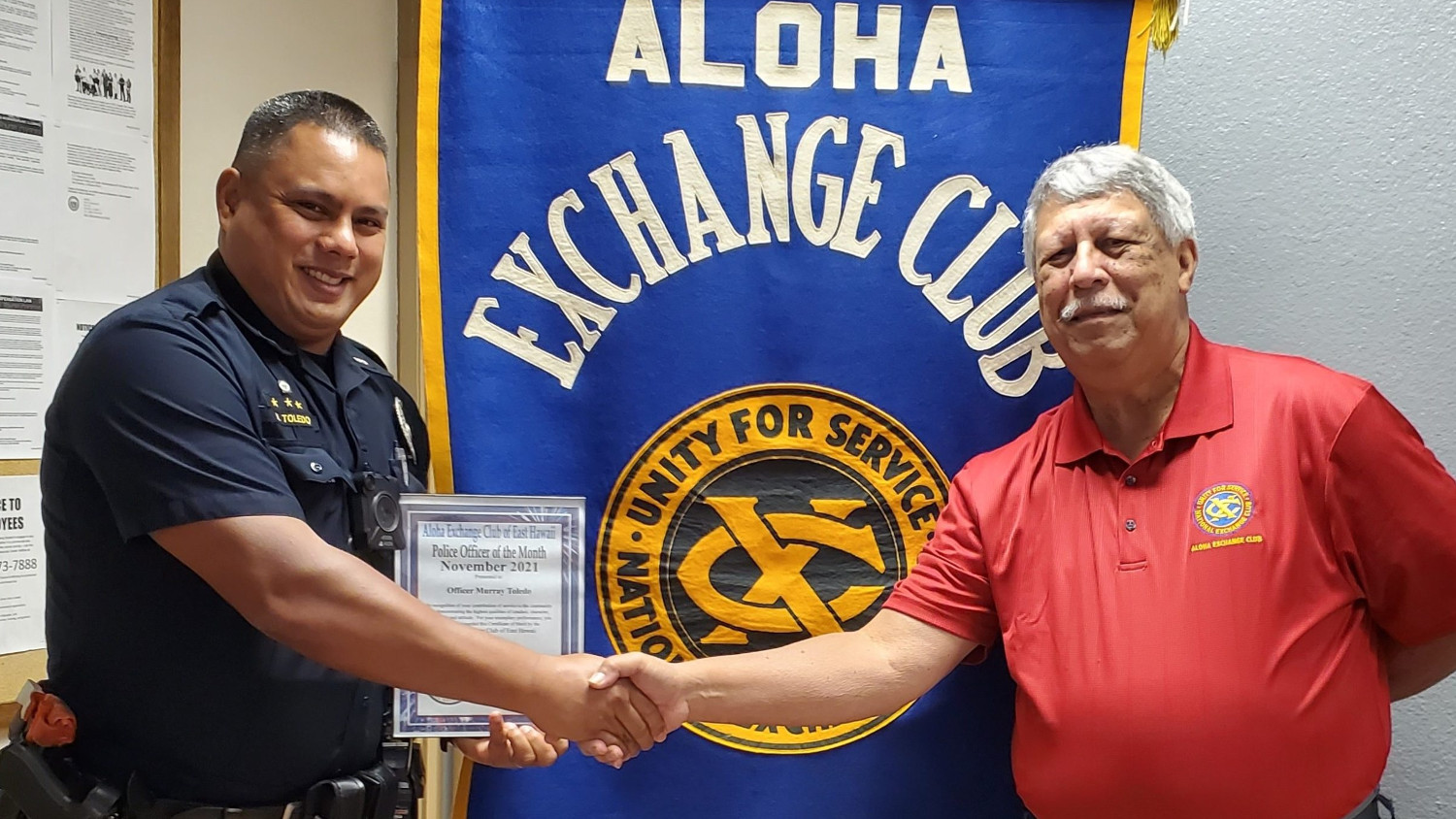 After a snarled start of the new school year in September 2021, officials said they were working on plans to address traffic concerns on Puainako Street. “COVID-19 has everyone adjusting to minimize student exposure resulting in more families dropping off/picking up students,” said Ken Watanabe, Principal at Waiākea Elementary School.

Officer Toledo is reported to have brought “stakeholders together from various county and state agencies to discuss the problem, develop a plan, and facilitate its implementation.”

A Hawai‘i Police Department School Resource Officer who proactively addressed a long-standing problem in his community was recently recognized as Officer of the Month for November 2021 by the Aloha Exchange Club of East Hawai‘i. Officer Murray Toledo, a 15-year-veteran of the department, received the award during a ceremony at the Hilo police station on Wednesday, January 26, 2022.

As the School Resource Officer for Waiakea Intermediate School, Officer Toledo has first-hand knowledge of the traffic congestion that has plagued the campus for more than a decade. Officer Toledo took charge conducting traffic direction during the school’s drop-off and pick-up times, often taking the brunt of the drivers’ frustrations, enduring their yells and criticisms.

Recognizing that while his efforts in traffic direction were helping, a permanent solution was needed, Officer Toledo set about developing a short- and long-term plan to address the congestion.

He quickly got all the stakeholders together from various county and state agencies to discuss the problem, develop a plan, and facilitate its implementation. Through his perseverance, he overcame numerous unforeseen obstacles among the stakeholders. He worked hard to negotiate an amicable solution everyone could live with, creating a sense of cooperation between all entities.

Additionally, in order to ensure the completion of the project, he volunteered his own time to stripe and assist in paving for the project.

Officer Toledo’s hard work and his ability to bring people together to focus on a common goal resulted in the creation of new larger and improved parking areas plus upgraded drop-off and pick-up lanes for two schools, which has tremendously reduced traffic congestion and driver complaints. In all, the project only took three months.

In addition to his work on the school traffic issues, Officer Toledo was also lauded for his sincere concern for youth.