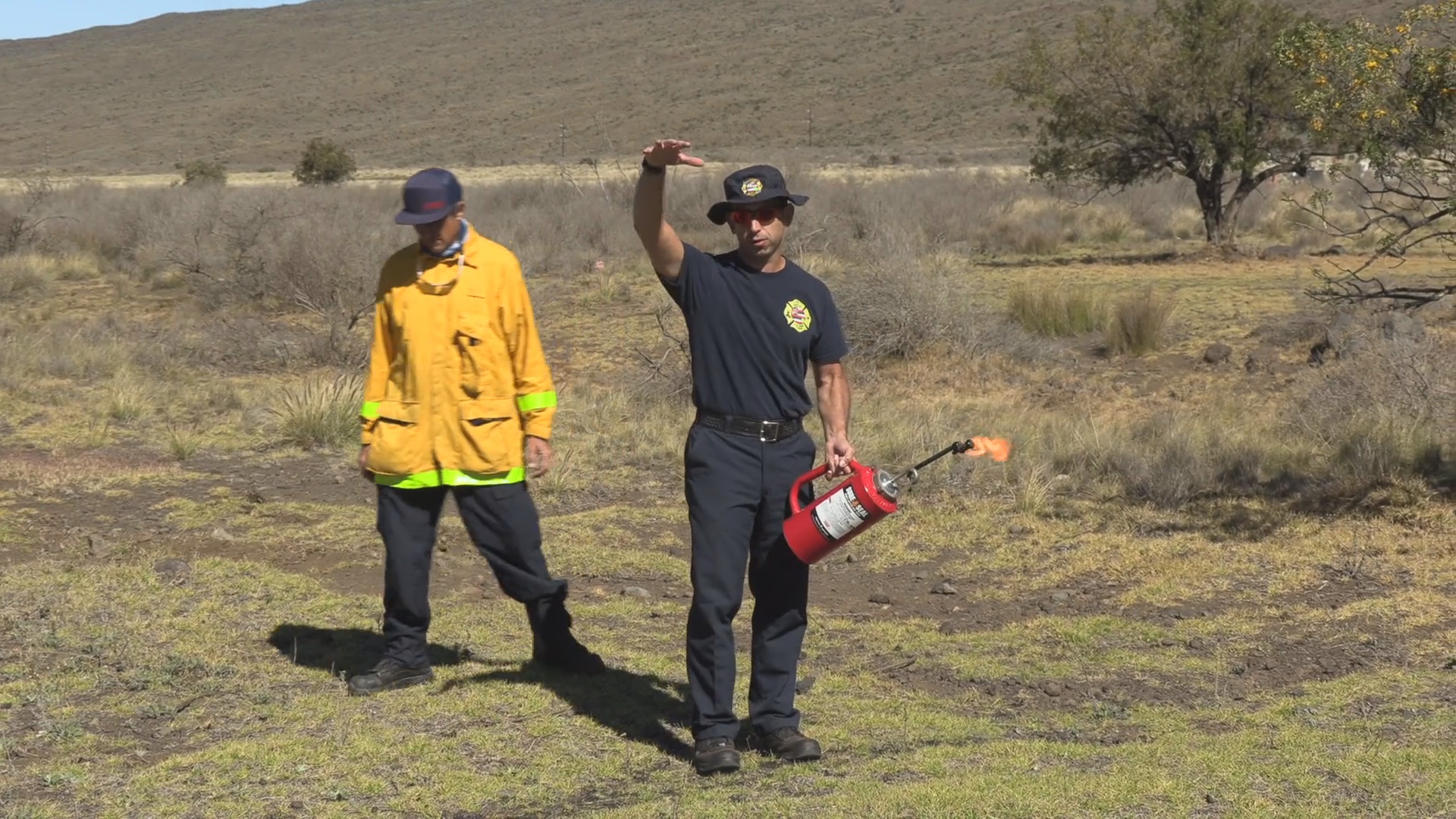 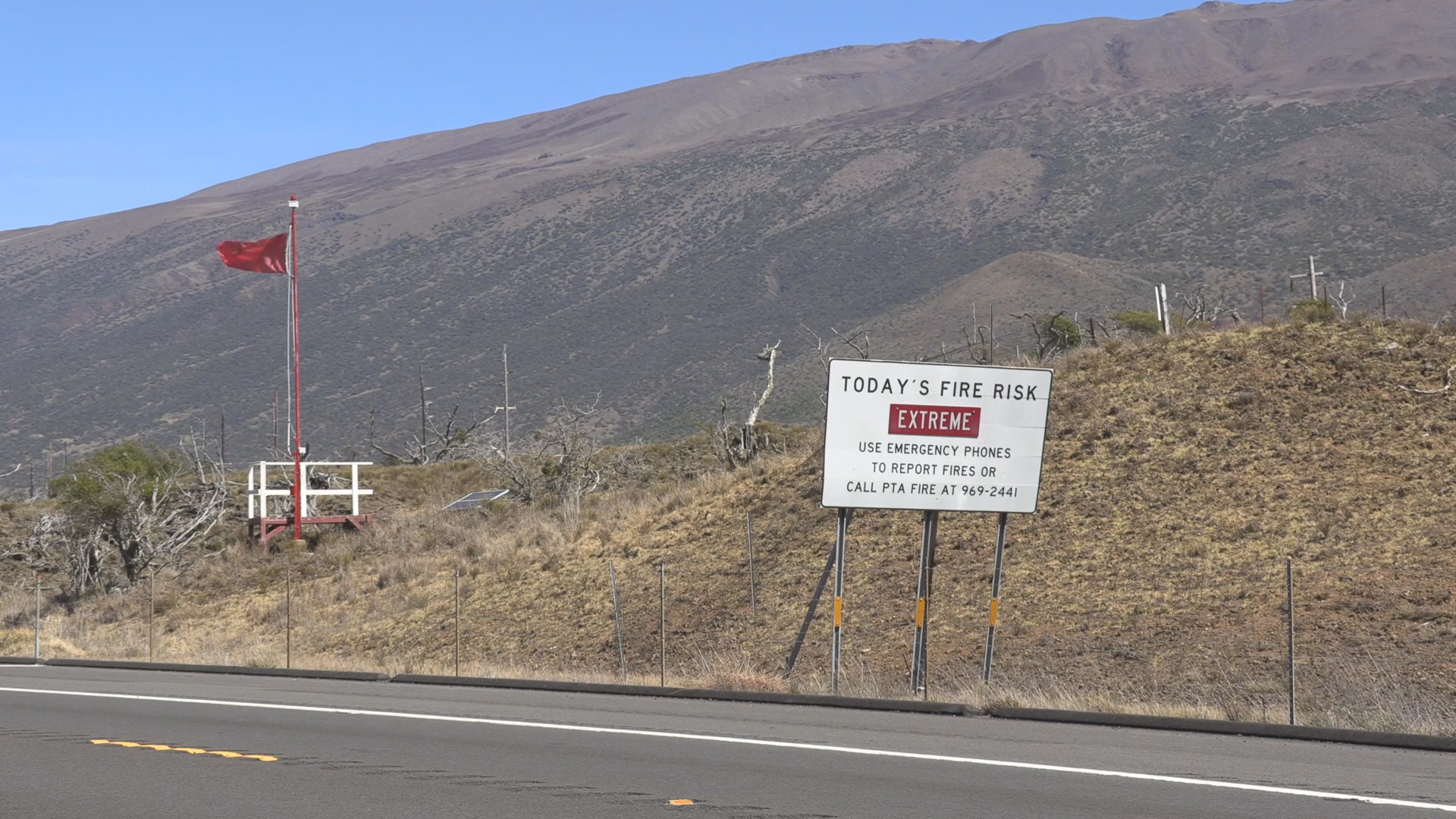 (BIVN) – With increasingly dry conditions being reported across the State of Hawaiʻi, firefighters are getting in some extra wildfire training on the Big Island.

The Hawaiʻi Department of Land and Natural Resources reported volunteer firefighters were recently provided two training sessions at the Pōhakuloa Training Area. From the DLNR:

You can’t miss the signs on the Daniel K. Inouye Highway, on either side of the U.S. Army’s Pōhakuloa Training Area (PTA), with large red letters spelling out, “Extreme Fire Danger.” Vegetation on the slopes of Mauna Kea is tinder dry and because of ever-worsening drought conditions is ripe for another wildfire like the 2021 Mana Road fire. At more than 40,000 acres, it was one of the largest wildland fires in recorded Hawai‘i history.

The PTA Fire Department is the first responder for fires and other emergencies over a vast area between Mauna Kea and Mauna Loa and is frequently dispatched across the entire island to provide mutual aid for other departments.

Recently the department provided two sessions of basic wildfire training for volunteer firefighters, using the standard national curriculum. It’s the same requirement for many municipal full-time firefighters, as well as the fire team from the DLNR Division of Forestry and Wildlife (DOFAW).

Mike Walker, the DOFAW State Protection Forester said, “We are totally supportive of the PTA building wildland firefighting capacity with community partners. Having people trained across west Hawai‘i at the same level as our firefighters will shorten response times, improve initial attack and potentially contain some fires before they impact communities or State lands under our jurisdiction.”

Training this week included volunteer firefighters from Waiki‘i Ranch. They were among the firefighters who helped bring the Mana Road fire under control last summer.

Capt. Ben Grodjesk is the Pōhakuloa Wildland Fire Program Manager. On Friday he demonstrated how to use a drip-torch to set backfires. “Having everyone doing this training, even though they may have been out on fire lines for a while, gives everyone the same sheet of music to work from. Getting everyone trained up, not only the full-time firefighters, but also the volunteers is vital,” Grodjesk said.

Roughly 90 west Hawai‘i volunteer firefighters serve under the watch of Hawai‘i Fire Department (HFD) Capt. Chas Taketa. He commended volunteers for helping on last year’s major fire and many others over the years. “They’re contributions are super important. They work and volunteer in the districts where they live. We may not know the ends and outs and access to certain areas, but the volunteers often do. They’re often closer to the starting point of a fire, so they can respond faster given how large our districts are on Hawai‘i Island,” Taketa commented.

During the two-day training course, the volunteers receive schooling in all the basics of wildfire. In the classroom topics like fire weather, operations, and the incident command system are covered. In the field they get hands on experience with equipment, tools, and wildfire control techniques.

Volunteer firefighters are not required to take the basic training, but Taketa says many volunteers sign up strictly out of love for their friends and families. “They are often born and raised in the places they’re protecting, so they certainly have a vested interest,” he added.

Reflecting on the Mana Road fire, Grodjesk notes the volunteers were vital in helping cover duty hours to give DOFAW and HFD firefighters down time to rest. “Their contributions and having the same basic initial training absolutely makes for a more effective and safer firefighting response,” he said.

On Sunday, the Hawaiʻi Police Department reported a brush fire in Kona forced the partial closure of Hina Lani Street near Kamamu Street.