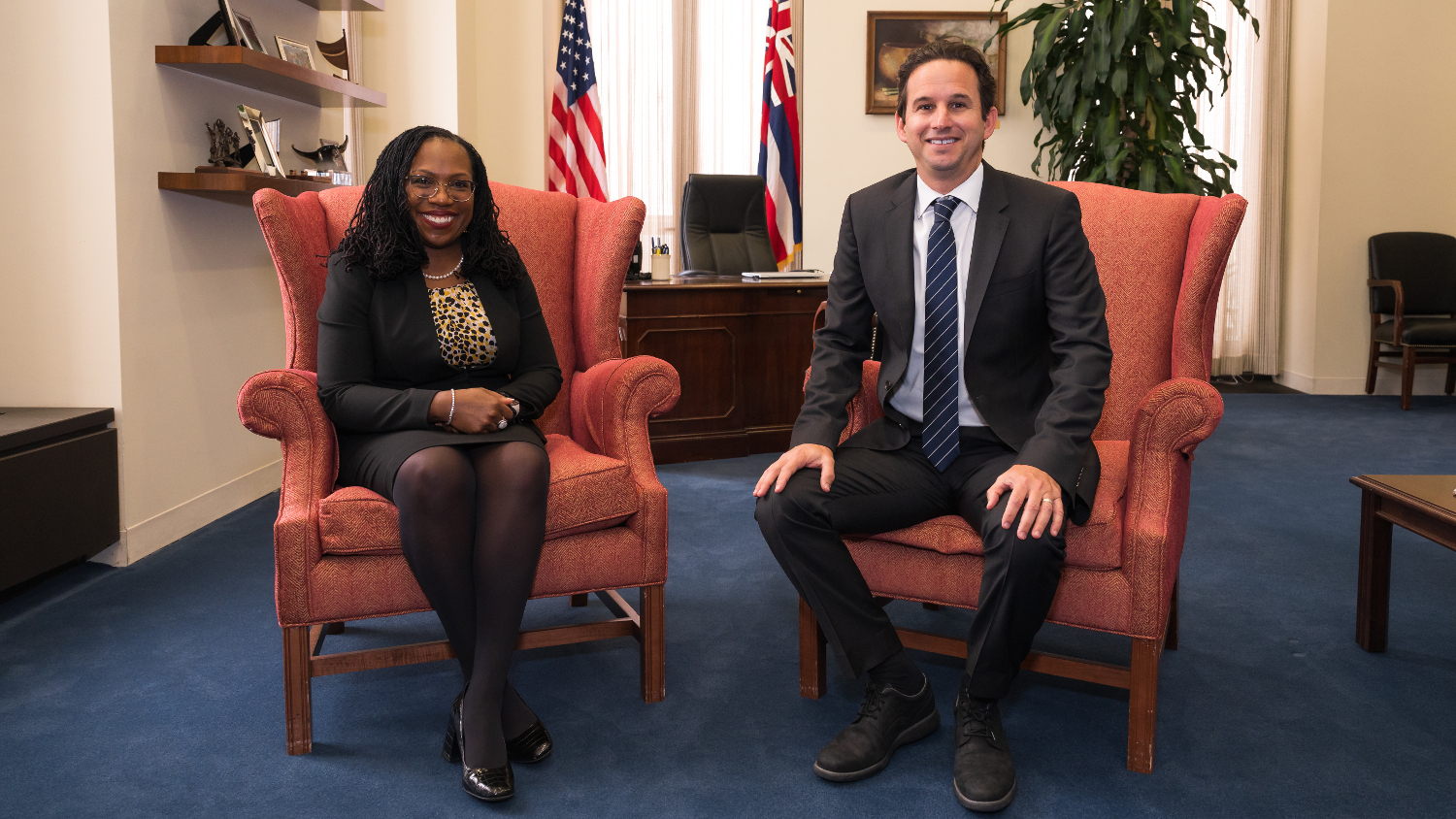 (BIVN) – The U.S. Senate on Thursday voted to confirm Judge Ketanji Brown Jackson to serve as an associate justice on the U.S. Supreme Court.

“Judge Jackson has the legal expertise, record of fairness, and extensive experience – both professional and personal – that will make her an excellent addition to the Supreme Court,” said Sen. Schatz. “Throughout her years of public service, she has demonstrated a dedication to the Constitution, including a strong commitment to equal justice under the law. It’s a record that’s earned her praise and respect from legal experts across the country and my support. As the first Black woman on the Supreme Court, Judge Jackson has made history and will help the Court better reflect the diversity of our country. I’m proud to have voted for her confirmation.”

“Today is a historic day,” said Senator Hirono, who delivered remarks on the Senate floor in support of the nomination the day before the vote. “For the first time in our country’s history, an exceptionally qualified Black woman will serve on the Supreme Court—and the Court’s decisions will be better as a result. Judge Jackson is a brilliant legal mind without an ideological axe to grind, and it is no surprise that she has received broad support across the political spectrum and across the country. Throughout the hearings, Judge Jackson displayed the intellect, integrity, and temperament necessary in a Supreme Court Justice.”

“Judge Jackson being on the Supreme Court will send such a powerful message of perseverance to everyone in this country, but in particular, to Black women and girls,” said Sen. Hirono. “She will make an exceptional Justice and I was honored to vote confirm her to the Highest Court.”

In her Wednesday remarks, Sen. Hirono condemned Republicans in the Senate who refused to support Jackson’s nomination. The full text from her speech is below:

Throughout two days of questioning in front of the Judiciary Committee, Judge Jackson proved without a shadow of a doubt what we all knew to be true: she is eminently qualified to serve on the Supreme Court of the United States. Judge Jackson has the intellect, the integrity, and the temperament befitting an Associate Justice of the U.S. Supreme Court, and she doesn’t have an ideological axe to grind. Judge Jackson is exceptionally qualified and well regarded across the political spectrum.

And yet, not a single Republican voted to advance Judge Jackson’s nomination out of the Senate Judiciary Committee, and only three have publicly expressed support for her.

So, I ask my Republican colleagues: what is it going to take? What is it going to take to put politics aside to support a nominee like Judge Jackson? Because clearly intelligence, extraordinary breadth of experience, and support from prominent conservatives did not suffice. Clearly, a candidate who has support from organizations from across the political spectrum, from the Black and Hispanic U.S. Chambers of Commerce, to the National Education Association, to the Fraternal Order of Police, the largest police union, to child advocacy groups—even this breadth of support, she doesn’t make the cut. Clearly, a nominee who was uniformly called “brilliant,” “beyond reproach,” “first rate,” and “impeccable” from her colleagues across the nation was not enough.

So truly, what will it take?

Instead, some of my Republican colleagues resorted to unfounded and misleading attacks in an unsuccessful attempt to smear her character. To highlight how ridiculous the attacks around the sentencing of child pornography offenses were, I asked Judge Jackson about the history of the sentencing guidelines for these crimes and the concerns that these guidelines do not reflect what is happening with child pornography offenses.

I named numerous other judges nominated by President Trump and supported by the Republicans on the Judiciary committee who have also sentenced offenders to sentences well below the guidelines. These judges also expressed concern about how the sentencing guidelines do not reflect the circumstances in the child pornography cases of today.

I will repeat this: Judge Jackson is a mainstream judge.

She has issued decisions and sentences similar to other judges across this nation, including those nominated by both Republican and Democratic Presidents. Despite some of my Republican colleagues’ attempts to distort the truth in order to get more likes on Twitter, what Americans across the country saw was an incredibly impressive, highly-qualified individual demonstrate that she has the intellect and the temperament to serve on the Highest Court. Throughout the course of this week, Americans also learned about her character.

I was particularly moved to hear the testimony of an individual who has known Judge Jackson for nearly 38 years who said, in part, “Ketanji’s incandescent brilliance was obvious to all of us from Day One. But even more importantly, she has always been one of the kindest, warmest, most humble, and down-to-earth people I’ve ever met. All this, while still possessing boundless charisma, drive, maturity, and grace.” These qualities, apparent from a young age, have clearly guided her throughout her life and her career, particularly when it comes to treating every single person she encounters with dignity and respect.

During the hearing, I asked Judge Jackson the same two questions on sexual assault and harassment that I ask of all nominees. In follow up questioning, I named judges who had committed such misconduct and asked Judge Jackson what she does to ensure her court is a safe and inclusive place to work. After Judge Jackson’s hearing concluded, a woman who had clerked for one of the judges I named reached out to me. During her clerkship with this judge, she endured extreme and pervasive sexual harassment. She came forward publicly about this judge’s conduct, an experience she described as a “harrowing ordeal.” She went on to a second clerkship, this time for Judge Jackson.

In Judge Jackson’s court, she says she was treated like a valued and talented employee who could make meaningful contributions to the law. She says clerking for Judge Jackson was the most meaningful professional experience she has ever had. She stated, “… Judge Jackson is the reason I am still a lawyer. I have no doubt I would have left the profession were it not for the way she treated me the year after my ordeal.”

The Supreme Court has existed for over 233 years, and of the 115 justices in the history of the Court, only five of them have been women, only two have been Black, and not a single one has been a Black woman. This is the Court that has decided cases that have had sweeping impact on our lives, including decisions that have solidified rights for the LGBTQ+ people, empowered women, strengthened unions, and more. But this is also the same Court that has throughout the course of history upheld slavery, Jim Crow, and the unlawful internment of Japanese Americans.

I close by noting that during the hearing, Judge Jackson told the Committee that as a freshman at Harvard, a Black woman said to her: “persevere.” That is something that a lot of us can relate to, including myself, who came to this country as a poor, immigrant kid. Judge Jackson being on the Supreme Court will send such a powerful message of perseverance to everyone in this country.

I will be honored to vote to confirm Judge Jackson.