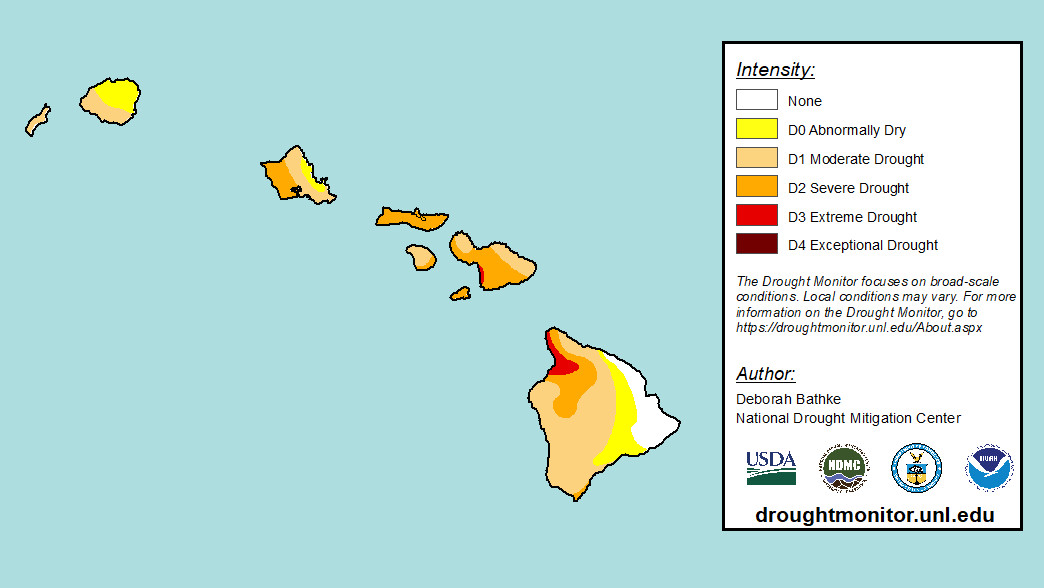 Graphic from US Drought Monitor, layout altered by BIVN for optimal display

(BIVN) – The United States Department of Agriculture has declared Maui County and Hawai‘i County as primary natural disaster areas as a result of drought, the Hawaiʻi Emergency Management Agency announced on Tuesday. The designation makes farm operators in those counties eligible for emergency loans and other Farm Service Agency assistance.

According to HI-EMA, Secretary of Agriculture Thomas Vilsack announced the designation in an April 8 letter to Governor David Ige.

On Hawaiʻi island, “extreme drought” was observed on the leeward side of North and South Kohala, surrounding the area of Kawaihae.

According to the U.S. Drought Monitor, historically observed impacts of “extreme drought” include:

Officials say the deadline to apply for the emergency drought loans is December 8, 2022, eight months from the date of the declaration. “Farmers may contact their local Farm Service Agency office for additional information on assistance that may be available to eligible applicants,” HI-EMA said.

“FSA considers each emergency loan application on its own merits, taking into account the extent of production losses on the farm and the security and repayment ability of the operator,” Secretary Vilsack said in the letter.