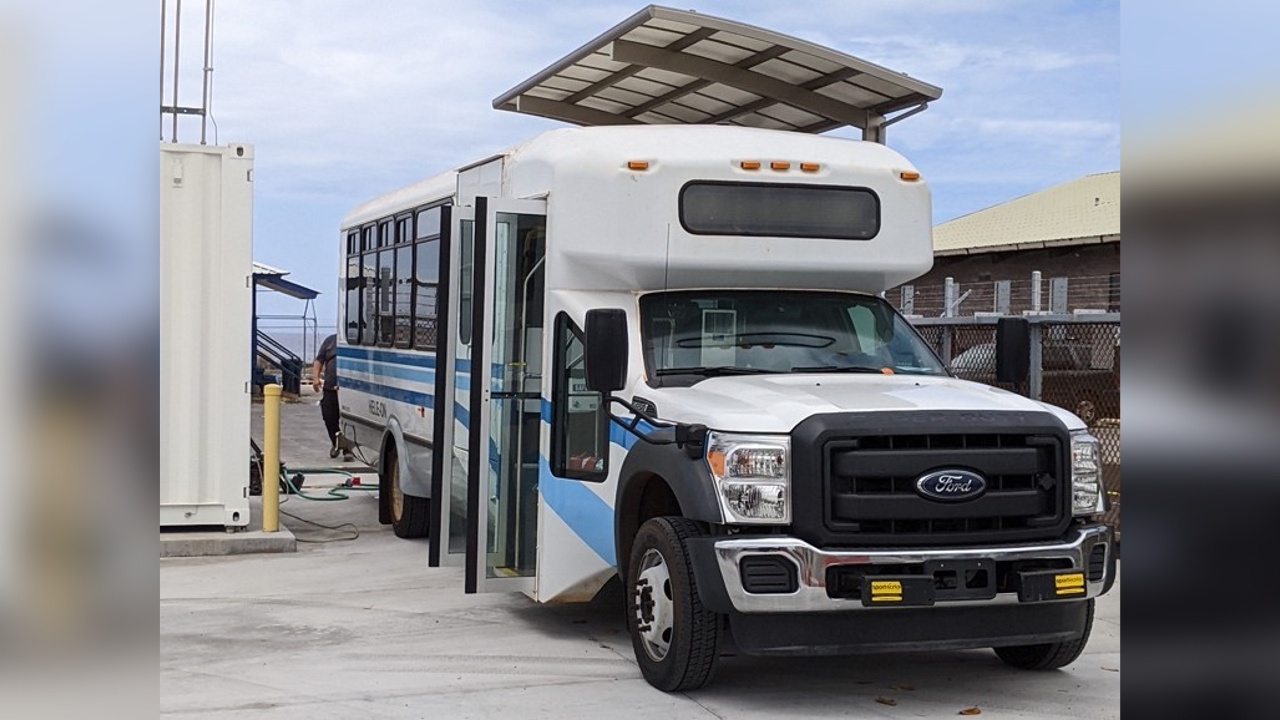 HAWAIʻI ISLAND - The Hele-On service is transitioning its entire fleet to zero emissions by 2035 through the use of hydrogen and battery-electric technology.

(BIVN) – The state’s first hydrogen bus has been delivered to Hawaiʻi and being prepared for service. From the County of Hawaiʻi:

The County of Hawaiʻi Mass Transit Agency (MTA), in partnership with the Hawaiʻi Natural Energy Institute (HNEI) and U.S. Hybrid, has taken delivery of its first hydrogen fuel-cell-powered bus intended for operation on Routes 202, 203, and 204 in Kailua-Kona later this Spring. The bus is expected to travel approximately 100 miles a day and rotate between the three Kailua-Kona routes. The bus was delivered to Hawaiʻi Island on March 23 and is being prepared for service.

“We are excited to put our vision into practice in terms of sustainable action on our island,” said Mayor Mitch Roth. “Shifting our entire County fleet to alternative fuel and electric vehicles is a priority for us, as we continue to push those in our community to consider alternative modes of transportation in a broader effort to curb greenhouse gas emissions and create a more sustainable future; for our keiki.” 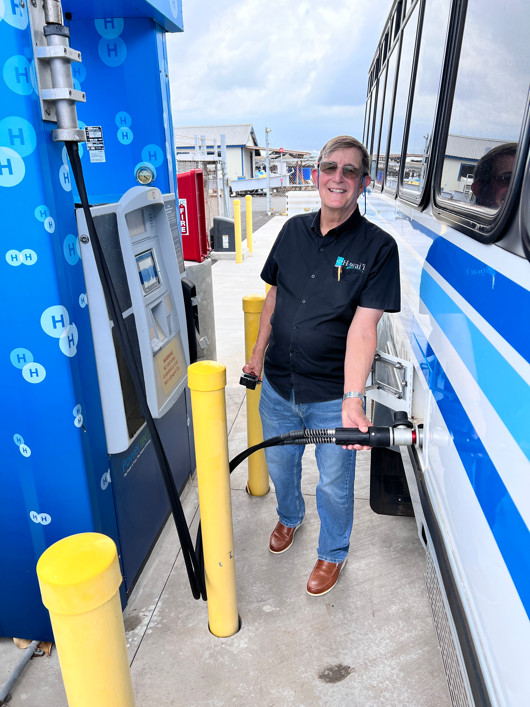 In 2019, the Hawaiʻi County Council accepted the 21-passenger 2014 El Dorado Aero Elite as a donation from HNEI. Originally purchased as a gasoline-powered vehicle, it was converted by U.S. Hybrid to hydrogen with a new state-of-the-art 40 kW U.S. Hybrid fuel cell as its proprietary electric drive system. The County Council is also awaiting delivery of two 19-passenger 2012 El Dorado Aero Elite buses converted for hydrogen fuel-cell power that the Hawai’i Volcanoes National Park donated to the County.

The first bus will be operated and maintained by Roberts Hawaiʻi until the base yard in Kailua-Kona is completed (tentatively scheduled for 2025). The maintenance will be transitioned to the MTA. Until this transition is completed, the bus will be maintained and fueled at the state-of-the-art hydrogen station built and operated by HNEI at the Natural Energy Laboratory Hawaiʻi Authority (NELHA) and commissioned last year. The station’s 65-kilogram per day hydrogen production can fuel all three buses. Funding for the station came from various sources, including the Office of Naval Research, the State of Hawaiʻi, and NELHA. The bus was purchased by HNEI using funds from the Energy Systems Development Special Fund, the U.S. Department of Energy, and the Office of Naval Research.

The remaining two 2012 El Dorado Aero Elite buses will be delivered later in 2022. These buses, currently powered with a 30kW hydrogen drive system, are being upgraded with the same 40kW U.S. Hybrid fuel cells and A123 Lithium-ion batteries as the 21-passenger bus to simplify maintenance issues. The upgrades to the two remaining buses are funded from the General Excise Tax (GET) provided by the County of Hawaiʻi.

“Hele-On is excited to be at the cutting-edge and pioneering new fuel technology to reduce our carbon footprint and provide quality service to Hawaiʻi County residents and visitors,” stated John Andoh, Mass Transit Administrator & General Manager of the MTA. “This hydrogen bus pilot will set the framework for the MTA to consider hydrogen buses that can operate across the island in the future once a hydrogen station in Hilo is constructed.”
Additional program elements include workforce and first responders training on how to operate and maintain a hydrogen bus. HNEI and U.S. Hybrid are providing this training.

In 2017 the four County mayors committed to transitioning the public transit fleets to zero emissions by 2035. As a result, in November 2020, MTA, in partnership with Roberts Hawaiʻi, initiated the operation of a battery-electric bus in Hilo as a first step in MTA’s long-term plans to convert the entire fleet to zero-emission technology. The move to electric and hydrogen-powered vehicles is part of MTA’s plan to convert the Hele-On fleet to 100 percent zero-emission technology by 2035.

MTA is working in partnership with the Hawai’i Department of Transportation and the neighboring islands of Maui and Kaua’i to implement a zero-emission bus (ZEB) rollout plan, which includes the operation of battery-electric buses on each island. MTA is testing both hydrogen fuel-cell electric buses and plug-in battery-electric buses to determine which ZEBs best meet MTA’s needs related to operations, maintenance, and cost, among other factors.

MTA will begin phasing in additional zero-emission buses as part of future bus purchases in 2023. At the same time, staff will continue to analyze emerging technologies and work with partners to secure funding for the buses’ purchase, operations, and maintenance.

A ribbon-cutting ceremony is planned for May at Kona Commons to coincide with the hydrogen bus being put into formal service. More details will be available in the near future.

Rick Rocheleau, HNEI Director, said: “This project, part of HNEI’s hydrogen infrastructure program, supports the introduction of zero-emissions buses for public transportation and will provide valuable information to the public transportation agencies allowing them to make more informed decisions as they transition from their legacy diesel fleets to newer vehicle technology. This project is also an important component of HNE’s mandate to help Hawaii reduce its dependence on fossil fuels.”