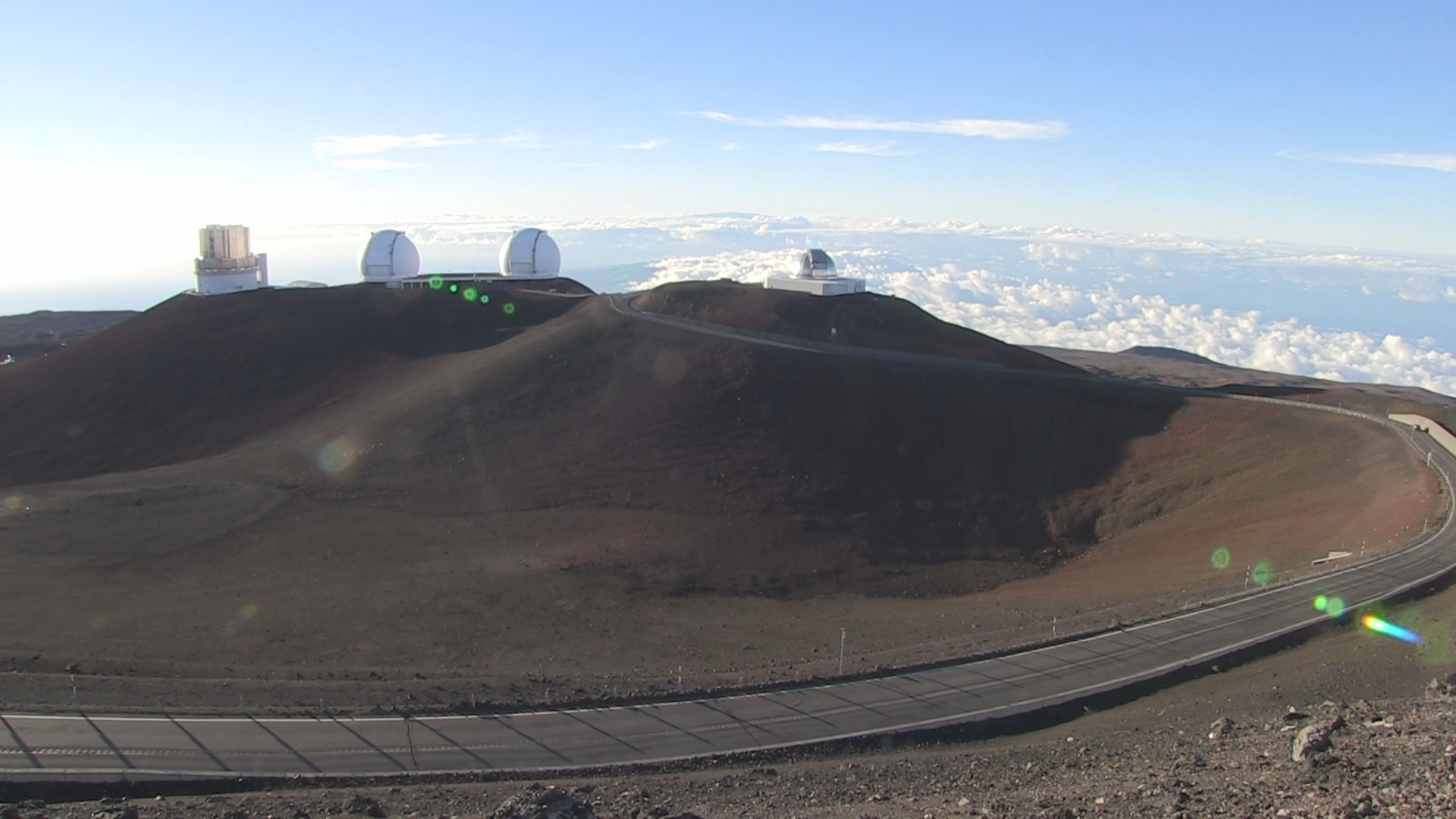 HONOLULU, Hawaiʻi - The University of Hawaiʻi and the Department of Land and Natural Resources issued statements on Thursday.

Both the University of Hawaiʻi and the Department of Land and Natural Resources issued statements on Thursday, following the Tuesday approval of the bill on final reading in the House and Senate.

The DLNR says wrote that the bill is “well-intentioned but leaves significant gaps that could result in worse management of Mauna Kea’s natural and cultural resources.”

According to the DLNR:

In short, the DLNR believes that HB2024 CD1 opens Mauna Kea to further development and commercial use without the regulatory oversight that applies to all other lands in Hawaiʻi.

The Department believes that while well-intentioned, this bill is based on a misguided assumption that UH has not managed Mauna Kea well. This is an old narrative that is no longer true. Mauna Kea is tightly managed as a clean astronomy zone at the summit surrounded by 10,000 acres of well protected natural and cultural resources. Many people who state that Mauna Kea is mismanaged believe that TMT should not be built. That is an entirely different issue.

Meanwhile, the University of Hawaiʻi says the bill “addresses the highest priorities we communicated to conferees, including the ongoing environmental and cultural stewardship of Maunakea and codifying astronomy as a state policy,” but also says “there are legal, land and constitutional concerns for Governor Ige to deliberate over as he considers the bill for potential veto.”

Both of Hawaiʻi’s legislative chambers have now passed HB2024 CD1, which would terminate UH’s responsibility for decision-making and stewardship relating to Maunakea.

The University has been clear in our priorities: we want to ensure that the mauna is cared for and stands as an environmentally responsible and culturally resonant model of world-class astronomy. At the same time, we believe Hawaiʻi deserves a world class program of astronomy research and education based at UH that is deeply connected to Hawaiʻi’s communities, history and culture. It has been UH’s position that these synergistic purposes can and do go hand-in-hand.

CD1’s stated purpose is to foster “a mutual stewardship paradigm in which ecology, the environment, natural resources, cultural practices, education, and science are in balance and synergy.” CD1 statutorily enshrines astronomy on Maunakea as a matter of state policy and it includes statutory language that locks in a minimum percentage of viewing time for UH in all future subleases, which will ensure that Hawaiʻi will not become a mere landlord of observatories on Maunakea. That minimum is substantially less than what we currently receive, so UH’s capacity for supporting world-class research and education will likely be diminished over time. But CD1 does address our highest priorities and supports our vision for Maunakea.

So there is much for UH to appreciate in CD1. For that we thank those who worked so hard to come to consensus. We are grateful to Senator Kim for her work on behalf of astronomy in Hawaiʻi. We also appreciate Speaker Saiki and the House conferees coming to agreement on something substantially different than their original House Bill, which we opposed.

That said, we had limited time to fully digest the details of the final version passed by the Conference Committee Friday afternoon before it was passed by the full Legislature. We shared with the conferees that we see legal, land and constitutional issues with the bill. But those will be for the Governor to deliberate over as he determines whether to consider the bill for potential veto.

Now that we have had time to complete our review, we have identified technical and operational concerns and questions with the final language. One issue is the lack of clear authority for stewardship responsibilities during the lengthy transition period. This creates substantial uncertainty for our amazing team of people who care for the mauna. We also have questions about the financial implementation, including the sunsetting of the current UH special fund before the Authority is in operation. We would also like to see clarification of matters regarding current UH obligations that cannot be fulfilled once UH is no longer the steward as well as UH vested property and other rights. We hope these matters can be addressed before enactment but we do not believe these are a basis for UH to request a veto of the bill.

The CD1 paradigm of establishing a standalone authority for Maunakea was the first of the models UH considered and publicly discussed with our Board of Regents in April 2020 when we reviewed alternative governance models as requested in their November 2019 resolution. While the model had significant appeal, as we publicly shared on multiple occasions, we noted that implementing a new standalone authority could not be done without new legislation. We also identified specific issues with that model, some but not all of which are addressed by CD1. Notably our approach to this paradigm would have provided greater accountability for the authority since it would still have maintained BLNR oversight of the authority’s stewardship and management. This accountability apparently falls to the Legislature alone under CD1.

What saddens me most is not the creation of a new Authority but that a completely false narrative that UH is mismanaging Maunakea drove this legislation. I have personally acknowledged and apologized publicly on multiple occasions for UH mismanagement of Maunakea in the previous century. Since then, UH has been on a trajectory of continuous improvement for over 20 years including: the 2000 Master Plan; the creation of the Maunakea Ranger program to protect public safety; establishment of the Office of Maunakea Management under UH Hilo; creation of the community-based Maunakea Management Board and Kahu Kū Mauna Native Hawaiian Advisory Council; adoption of Administrative Rules in the face of extraordinary challenges; the support and resourcing of the ʻImiloa Astronomy Center; regular monitoring of over 260 historic, archaeological and cultural sites identified by extensive UH surveys; and removal of invasive species. Compelling indicators of our success include removal of the endemic wēkiu bug from candidacy as an endangered species thanks to UH research and discovery of a previously unknown population of petrels on Maunakea through UH-sponsored field studies.

Under the leadership of our Board of Regents we have now consolidated all management and stewardship programs under one Center that is part of UH Hilo and accelerated our pace of improvement. Not all our changes to improve stewardship were appreciated even by our observatory partners. But we stayed focused on achieving the Board of Regents vision to create a “global model of harmonious and inspirational stewardship that is befitting of Maunakea.” As affirmed by a recent independent review, the claims that UH is mismanaging Maunakea are more about opposition to TMT and astronomy on Maunakea than our actual management practices. I am proud of the scores of individuals who have spent decades building a great stewardship program. Maunakea is now considered by many experts to be among the best-managed state lands, notwithstanding that they are also probably the most complex. And our stewardship has been recognized with awards from groups as varied as the Hawaiʻi Historic Foundation and the Kona-Kohala Chamber of Commerce. The work of our people at every level has been superlative under extraordinarily challenging conditions. Yet opponents of TMT and astronomy on Maunakea chose to continue to cite a critical audit from a generation ago and refused to acknowledge current audits, assessments, and the clearly demonstrated accomplishments of UH’s stewardship.

Ultimately, the weight of our practices last century and opposition to TMT on Maunakea were enough to drive the passage of this legislation. Some supporters just wanted a change. Ironically, both supporters of astronomy and TMT on Maunakea, and opponents of astronomy and TMT on Maunakea, see this legislation as the solution that will achieve their objectives. We fervently hope that change for change’s sake does not lead to a diminution of either or both of the excellent stewardship of Maunakea or Hawaiʻi’s world-class astronomy program that has been achieved under UH leadership.

We thank our many, many public and quiet supporters. They appreciated and were willing to acknowledge our success in caring for the mauna and our willingness to absorb criticism as we supported a field of science in which Hawaiʻi has unique global advantages and has established international leadership. We appreciate all your support of astronomy, our outstanding stewardship of Maunakea, and our work in cultural and educational integration. We hope you will similarly engage and help the new Authority take on its critical role moving forward.

For our part, UH intends to sustain the excellent stewardship program we have put in place under the watchful eyes of our Board of Regents for as long as that is our responsibility. That includes implementing the new educational programs developed by ʻImiloa, completing the decommissioning of the two telescopes now underway, and completing the planned installation of the small UH Hilo teaching telescope on previously disturbed ground at Hale Pōhaku. We will also proceed with the update to our Comprehensive Management Plan, which will help us improve our stewardship in the years we have left managing the lands we lease on Maunakea.

We do not yet know if HB 2024 will be enacted exactly as proposed in CD1. But given the momentum behind the legislation, UH plans to immediately pause all sublease negotiations with the current observatories and our planning of any additional decommissioning. CD1 makes it clear that the new Authority will be responsible for deciding if there will be more or less astronomy on Maunakea than the nine observatories allowed under the current UH Master Plan. We will also pause our work toward a new Master Lease and the associated EIS. And we will undertake internal analyses to understand how we can best unravel the complex long-term obligations we accepted through our master lease, subleases and permits, which would become the responsibility of the Authority.

Should the new Authority be established, we plan to engage as positively and collaboratively as possible, including through the participation of a Regent and the UH Hilo Chancellor as members of the Authority Board. We will share our Master Plan, our Management Plans, our Rules, our work on an EIS and other documents as may be useful to the Authority. And we will seek to build a relationship as the owner/operator of telescopes on Maunakea.

Most of all, we will wish the new Authority all the best as they assume an incredibly challenging role in what has been one of the most divisive issues for Hawaiʻi in decades.