VOLCANO WATCH: Reflections On The Past Four Years At Kilauea

HAWAIʻI VOLCANOES NATIONAL PARK - It has been four years since the start of the dramatic 2018 eruption on Kilauea's lower East Rift Zone, and scientists are looking back on the changes since that event. 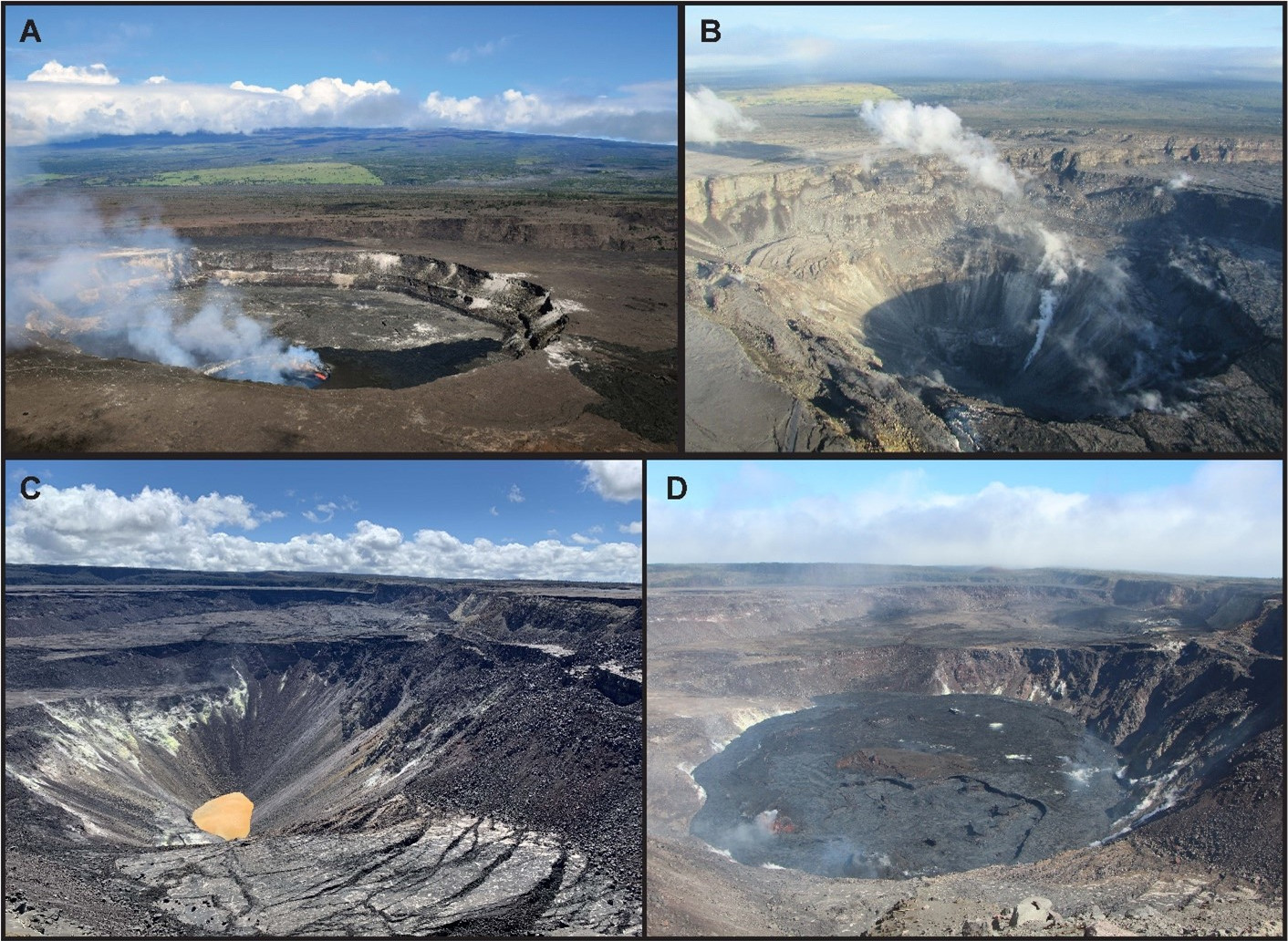 USGS: “A) Top left, photo of Halemaʻumaʻu before the 2018 collapse events started with the decade-long active lava lake that formed in 2008. B) Top right, photo after the 2018 collapse events had dropped the crater floor of Halemaʻumaʻu by more than 1,600 ft (500 m) over the course of just 4 months. C) Bottom left, in July 2019 a water lake started to form in the newly deepened Halemaʻumaʻu, and this lake continued to grow over the next year and a half. D) Bottom right, the eruption in December 2020 boiled away the water lake in a single night and continued until May 2021 before another eruption started in September 2021, continuing to the present.” (All photos are from the U.S. Geological Survey Hawaiian Volcano Observatory)

(BIVN) – The current USGS Volcano Alert level for Kīlauea is at WATCH, as lava continues to erupt from the western vent within Halemaʻumaʻu crater. All lava is confined within the summit crater in Hawai‘i Volcanoes National Park.

It has been four years since the 2018 eruption that brought dramatic changes to Kilauea. This week’s U.S. Geological Survey Hawaiian Volcano Observatory’s Volcano Watch was written by research geologist Drew Downs:

May 3rd marked the 4th anniversary of the start of Kīlauea’s historic 2018 eruption that covered much of lower Puna with lava flows and dropped the crater floor of the summit. This anniversary is an appropriate time to reflect on the dynamic landscape we share and the events of the past 4 years. At the same time, we’re considering what these recent changes might mean for future activity at Kīlauea.

For some, Kīlauea Volcano seemed set in its ways, as it had been erupting for 35 years (1983–2018) at Puʻuʻōʻō on the middle East Rift Zone. The summit crater of Halemaʻumaʻu joined the action, and from 2008 to 2018 hosted a lava lake that drew people from around the world to enjoy its stunning views.

While seismographs, tiltmeters, and various other geophysical equipment were recording the beginning of changes at Kīlauea in 2018, the first major visible sign of something out of the ordinary occurred on April 30 with the sudden collapse at Puʻuʻōʻō. Just a few days later, on May 3, seismic activity had migrated beneath Leilani Estates and fissures opened. Before May was over, 24 fissures had erupted and lava flows would continue to inundate parts of lower Puna until September. USGS photo taken during the eruption on the Lower East Rift Zone of Kīlauea back on July 10, 2018. “All 24 fissures from this eruption opened within Lava-Flow Hazard Zone 1, which is the area with the highest lava flow coverage rate,” USGS says. “The lava flows erupted from these fissures covered 13.7 square miles and destroyed over 700 homes, all within Lava-Flow Hazard Zones 1 and 2.”

The summit crater of Halemaʻumaʻu also underwent major change, and its lava lake disappeared during the 2018 eruption. As lava flows in lower Puna drained the summit magma reservoir, Halemaʻumaʻu underwent 62 collapses (some with explosive eruptions). Each incremental collapse was marked by earthquakes that were felt throughout the summit. When the dust settled (and there was a lot of dust), the collapses had lowered the crater floor by more than 500 m (1,600 ft). 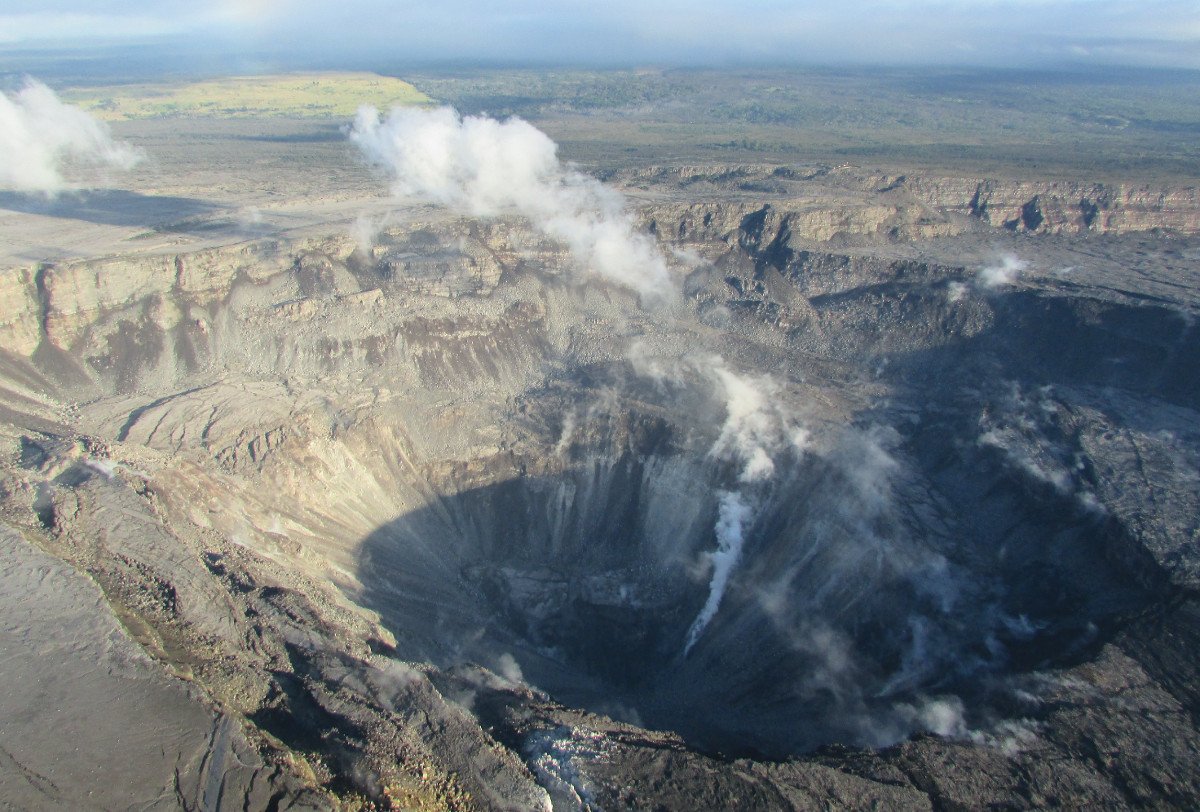 The end of the 2018 eruption and caldera collapse events brought a period of quiescence that had been unknown at Kīlauea for over 35 years. It also brought a new and interesting change to the volcano.

For the first time since written records began, a water lake formed within the deepened pit of Halemaʻumaʻu. First noticed in July 2019, the water continued to slowly fill the crater over the next year and a half until it was about 50 m (160 ft) deep. 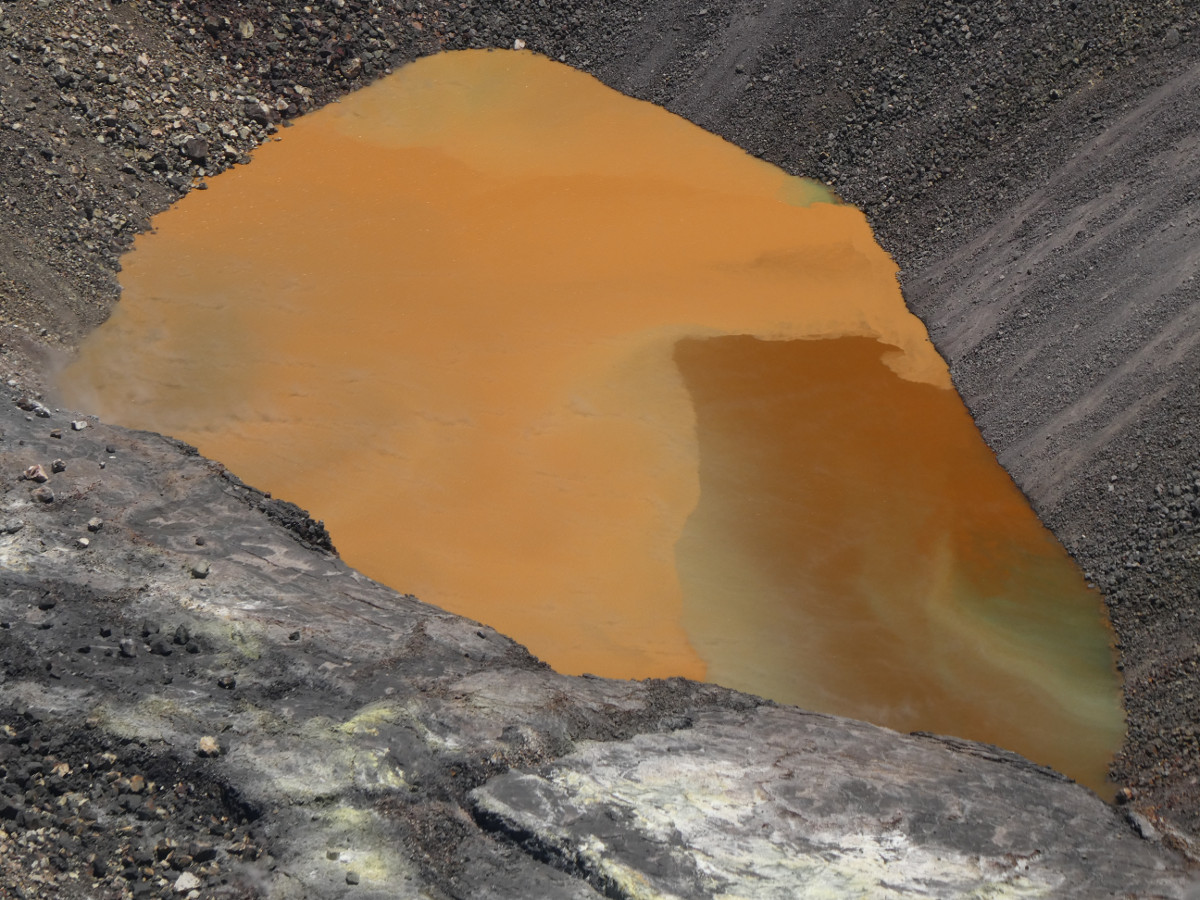 The colorful caldera lake at Kīlauea summit. The view is from the western rim of Halema‘uma‘u crater, 1900 ft (580 m) above the water surface, in a restricted area of Hawai‘i Volcanoes National Park. USGS photo by M. Patrick 08/25/2020.

On the night of December 20, 2020, the water lake boiled away within an hour or two as Halemaʻumaʻu burst into eruption again. Within less than a day the new lava lake was deeper than the water lake had been, and it continued to grow and fill in the crater until May 2021. Yet again, Kīlauea did not stay quiet for long. Halemaʻumaʻu began a new eruption in September 2021; an eruption that continues to this day. These two eruptions have filled Halemaʻumaʻu with over 320 m (1,050 ft) of lava. USGS PHOTO: A view of Halemaʻumaʻu crater, where multiple fissures began erupting on the evening of December 20. The northern fissure, pictured, was producing the tallest lava fountain at roughly 50 m (165 ft), and all lava was contained within Halemaʻumaʻu crater in Kīlauea caldera.

Nearly continuous lava lake activity occurred for decades at Kīlauea’s summit in the 19th century. While the summit eruption within Halemaʻumaʻu doesn’t currently show signs of stopping, it can be easy to forget that Kīlauea has the potential to change quickly from one day to the next. Just glancing at the volcanic rocks, ash, and vegetation, or lack thereof, on Kīlauea testifies to inevitable events that can sometimes happen with remarkable speed over the course of months, weeks, or even days.

An important question on the minds of USGS Hawaiian Volcano Observatory (HVO) staff is what these recent changes portend for Kīlauea’s future? The appearance of the water lake at the summit in 2019 renewed attention on Kīlauea’s explosive potential. Native Hawaiians recorded Kīlauea’s major explosive events in their oral traditions and the possibility of explosive eruptions had everyone’s attention during this time. The dramatic switch to summit lava lake activity within Halemaʻumaʻu, has alleviated much of that concern.

Are we returning to a period of prolonged summit activity similar to the 1800s? Or will future activity be more similar to that in the three decades prior to the start of the Puʻuʻōʻō eruption? This period was marked by numerous small and short-lived periodic eruptions that alternated between Kīlauea’s summit and rift zones.

It is not possible to know what exactly lies in store for Kīlauea’s future, though history and modern monitoring tools provide clues. While this volcanic environment can be dangerous, devastating, and tragic to behold, it is also inspiring, breathtaking, and commanding. With every change, we learn something new and hope to continue to increase our understanding of Kīlauea.