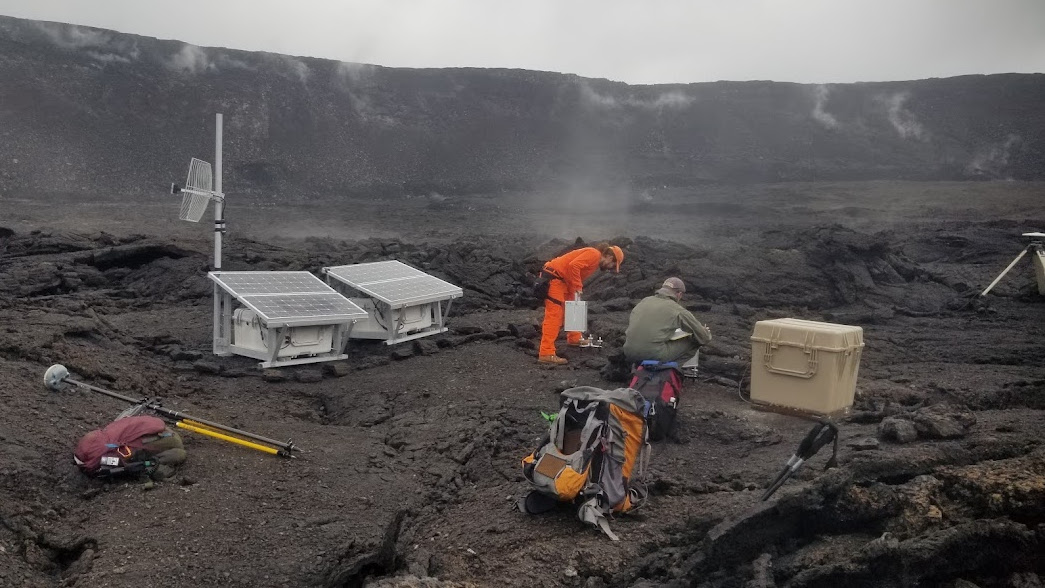 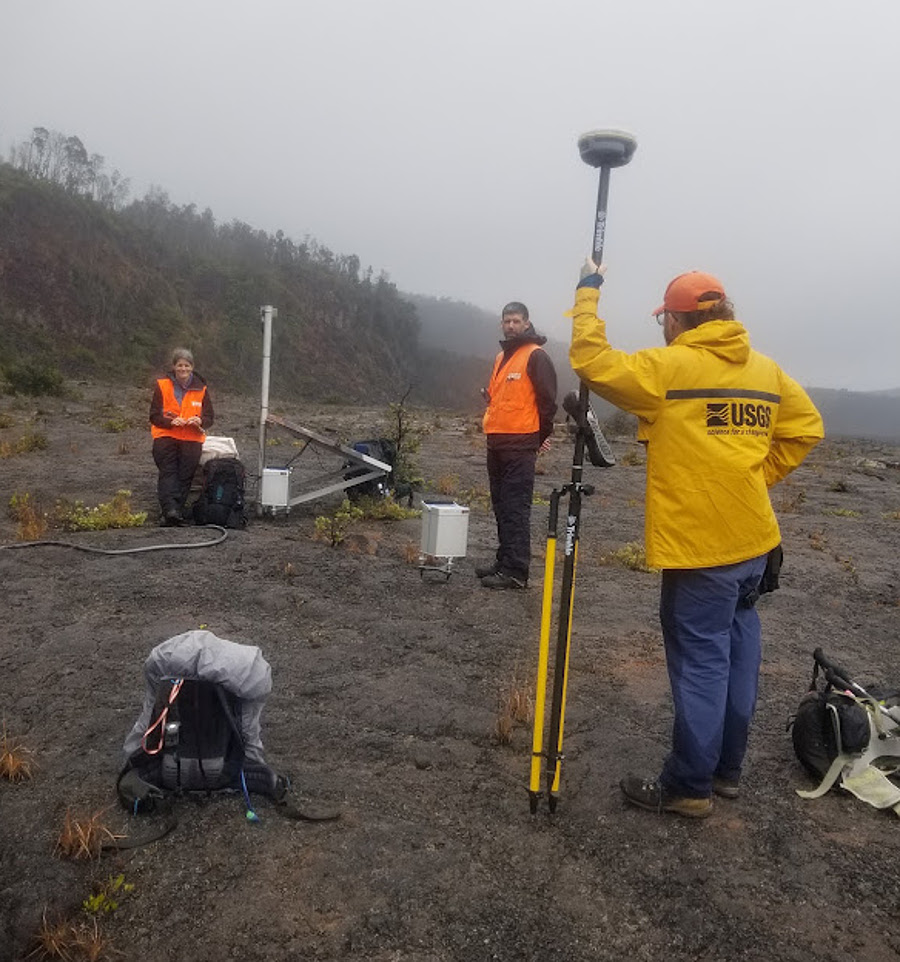 USGS: “During a gravity survey, HVO scientists measure the relative strength of gravity (using a gravimeter, one of the small light-colored boxes in the center of the photo) between benchmarks. At each benchmark, the effects of elevation changes are corrected using high-precision vertical positions from kinematic Global Positioning System (using a GPS, on a tripod and antenna in the foreground of the photo).” (USGS photo by A. Ellis)

This week, the USGS Hawaiian Volcano Observatory published a series of photos showing HVO scientists – along with visiting scientist from other volcano observatories – installing “new continuous, telemetered gravimeters” on the floor of Kīlauea caldera. The instruments will allow HVO to monitor changes in gravity real-time.

We tend to think of gravity as a constant—a force that pulls on everyone equally, everywhere. But this is not quite true. In fact, the force of gravity depends on the mass beneath your feet, and your distance from that mass.

If there is something very dense beneath the ground, like a solidified magma chamber, gravity is a bit stronger in that area. Conversely, the farther you are from the Earth’s center, the weaker gravity is. For example, you weigh slightly less (by a small fraction of a pound) at the 4169-m (13,678-ft) summit of Mauna Loa than at sea level in Hilo! 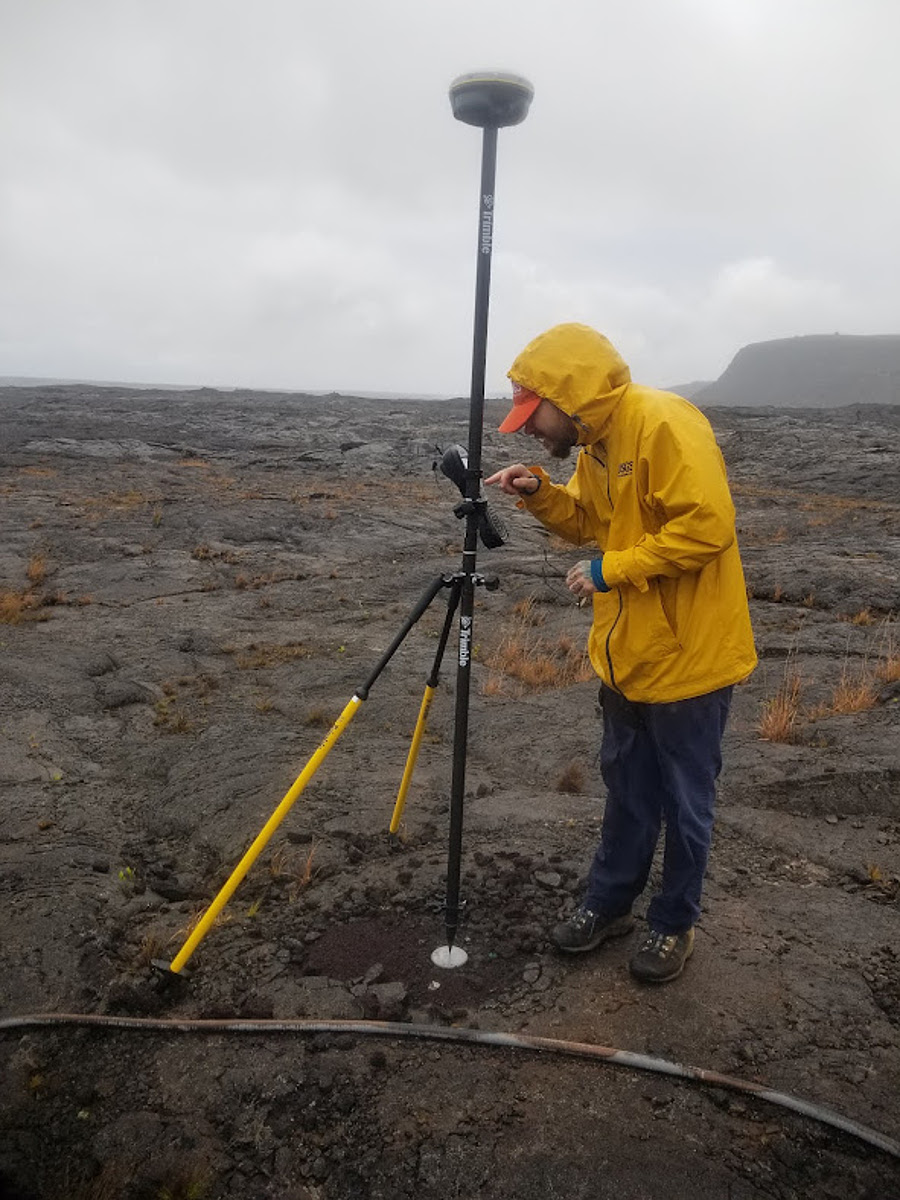 USGS: “HVO scientists took ​GPS measurements at multiple locations on the floor of Kīlauea caldera during the recent gravity survey. By comparing the measurements made at these benchmarks with survey data from previous dates, HVO scientists can ​correct for any uplift or subsidence when estimating the change of mass ​from their gravity measurements. The results of this survey will be interesting given the activity at the summit of Kīlauea over the past several years.” (USGS photo by A. Ellis)

By measuring gravity and surface deformation at the same time, these effects can be separated. This makes it possible to use gravity to measure just how much magma may be moving beneath the ground.

The changes recorded during the 2018 Kīlauea eruption and summit collapse were the largest gravity changes ever observed, scientists say.