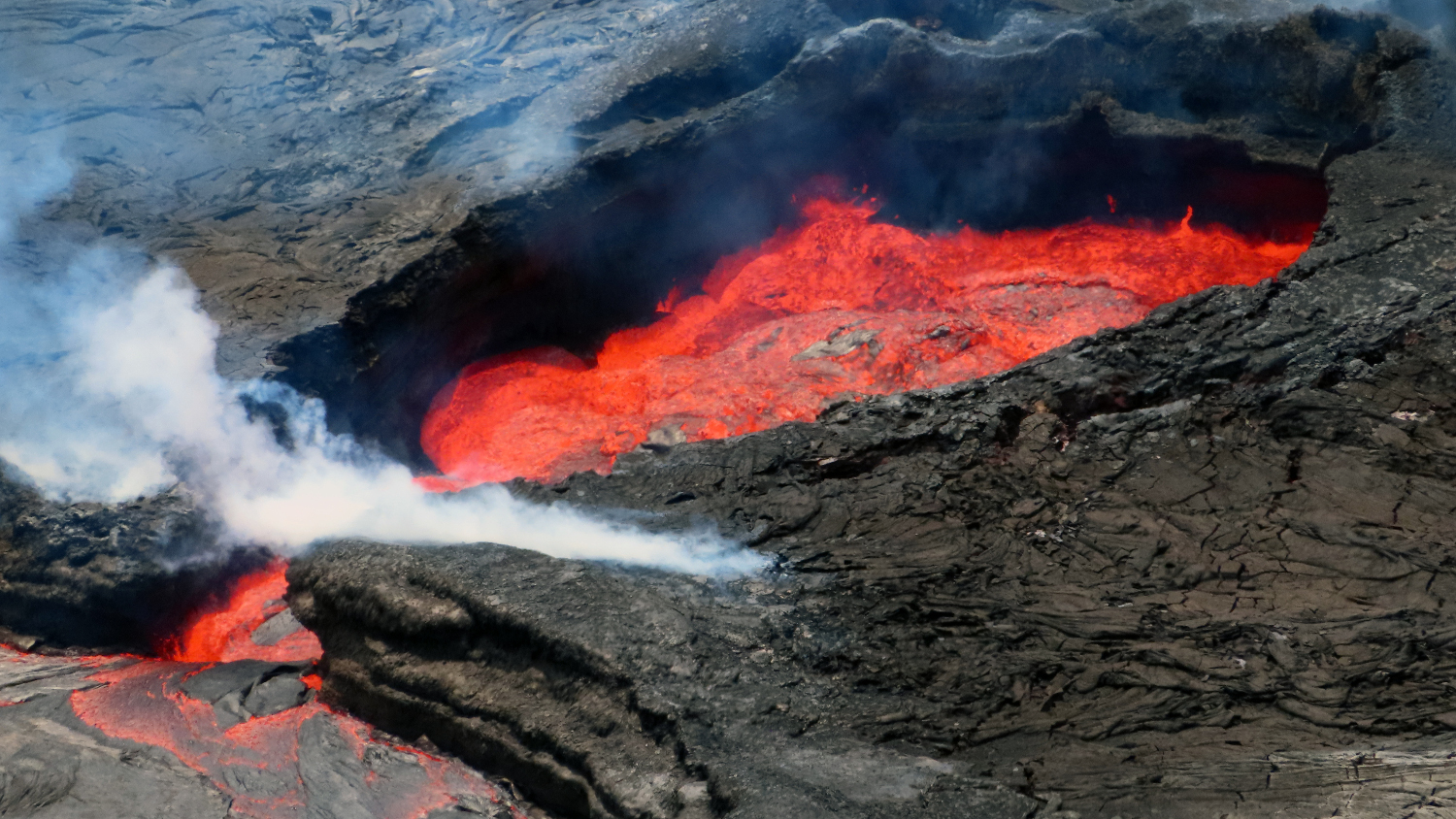 USGS: "The feature shown in the photograph is a drainage outlet for the active lava lake of Halema‘uma‘u, a crater within the summit caldera of Kīlauea volcano. Surface plates from the active lake surface are dragged into the outlet and churned up. A small standing wave, about 1 meter or 1 yard tall, is present in the center of the outlet structure. This photograph was taken during an observational field shift during the morning of May 18, 2022." (USGS photograph by L. Gallant) 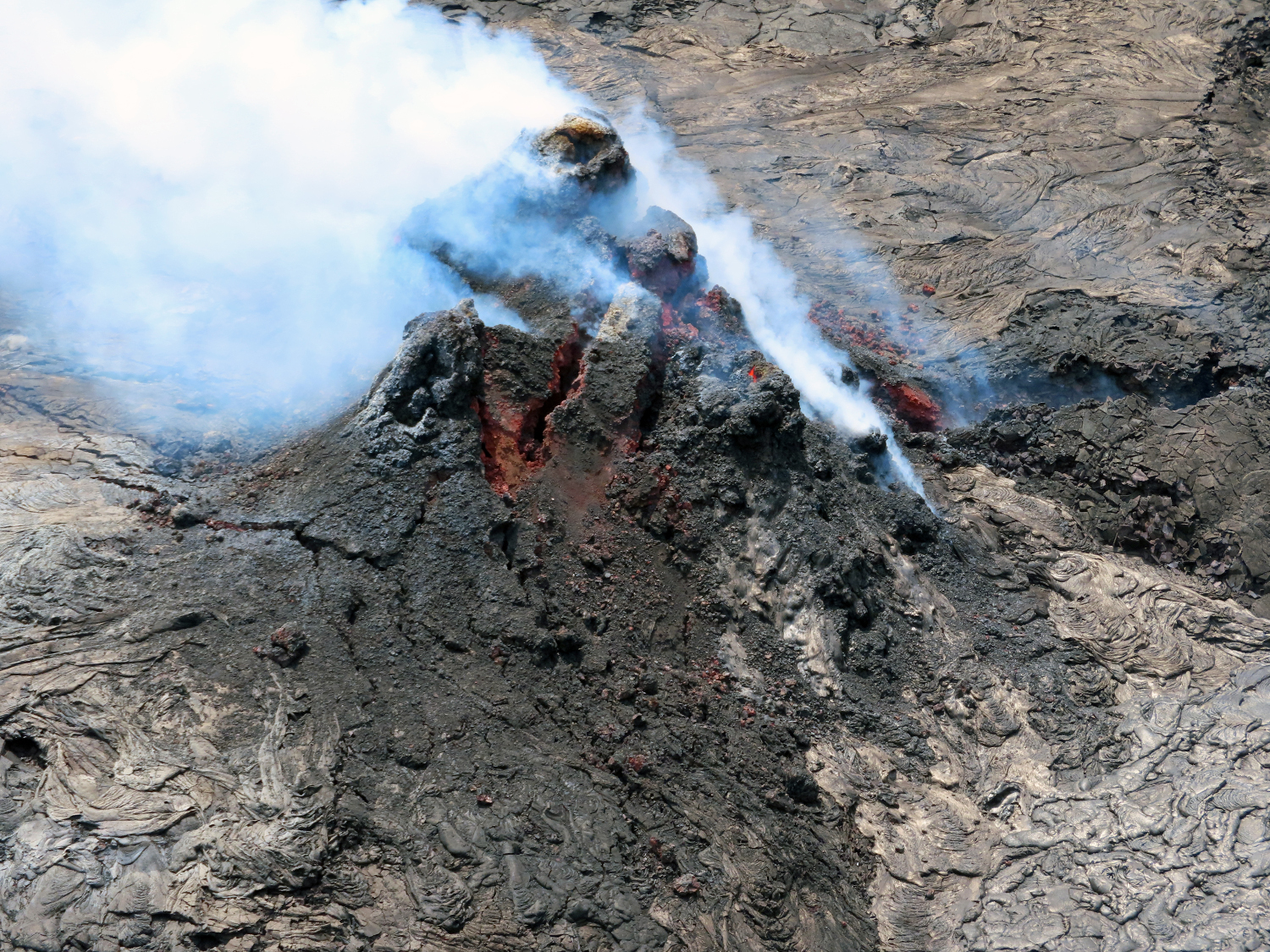 USGS: “The vent within Halema‘uma‘u, at the summit of Kīlauea, was degassing during a field observation visit on the morning of May 18, 2022. The vent is 56 feet tall (17 meters) and has a small puka (hole) visible with bright red glowing lava within on the right side of the photograph. Throughout the eruption, the cone has gone through several cycles of growth and collapse. The growth is driven by successive accumulation of spatter and lava flows (like the silvery smooth ones on the right side of the picture) whereas the collapses are driven by failures along weaknesses in the structure, like the large cracks visible on the cone in this photo.” (USGS photograph by L. Gallant)

(BIVN) – The summit eruption of Kīlauea Volcano continues, and scientists say current data indicate that the activity is likely to continue and remain contained to the Halemaʻumaʻu crater within Hawaiʻi Volcanoes National Park. 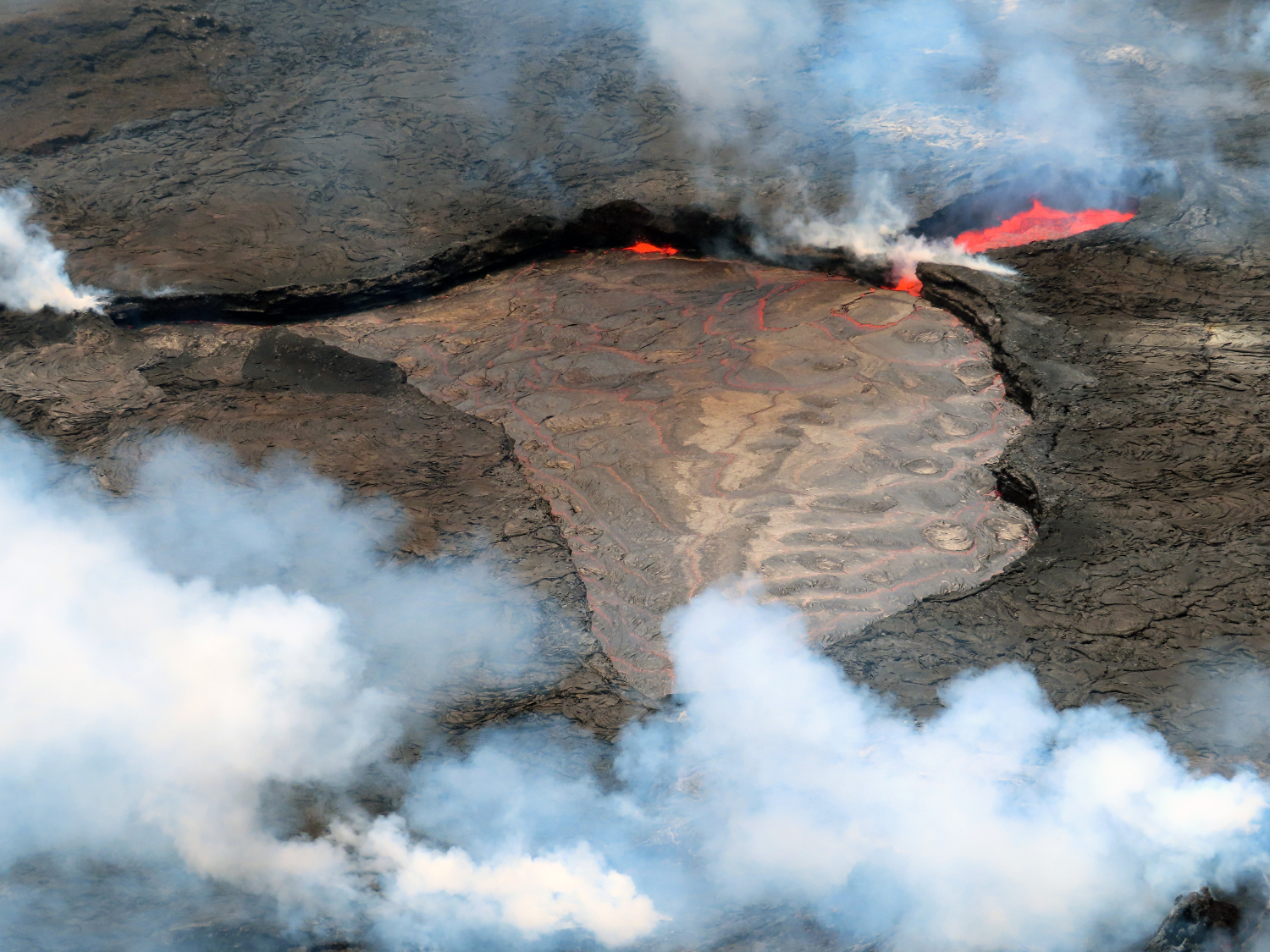 USGS: “A view of the active lava lake within Halema‘uma‘u, taken during a Kīlauea summit monitoring field shift on the morning of May 18, 2022. The active lake is draining into the small pond on the right of the photograph. Spattering along the margins of the lake is common, seen here in the center of the photograph. This activity is accompanied by loud whooshing and roiling noises that are sometimes audible from the Keanakāko‘i public overlook.” (USGS photograph by L. Gallant)

From the Tuesday update by HVO:

Halemaʻumaʻu Lava Lake Observations: Eruption of lava from the Halemaʻumaʻu western vent into the active lava lake and onto the crater floor has continued over the past 24 hours. The active lava lake has shown continuous surface activity, with lake level remaining relatively high, with some minor fluctuations in level. Lava ooze-out activity continues with nearly continuous ooze-outs along the western and north-western edge of the lava lake. Overflight measurements on May 10, 2022 indicated that the crater floor had seen a total rise of about 106 meters (348 feet) and that 77 million cubic meters (20 billion gallons) of lava had been effused since the beginning of this eruption on September 29, 2021.

Summit Observations: Summit tiltmeters show nearly flat tilt over the last 24 hours. A sulfur dioxide (SO2) emission rate of approximately 2,300 tonnes per day (t/d) was measured on May 22, 2022. 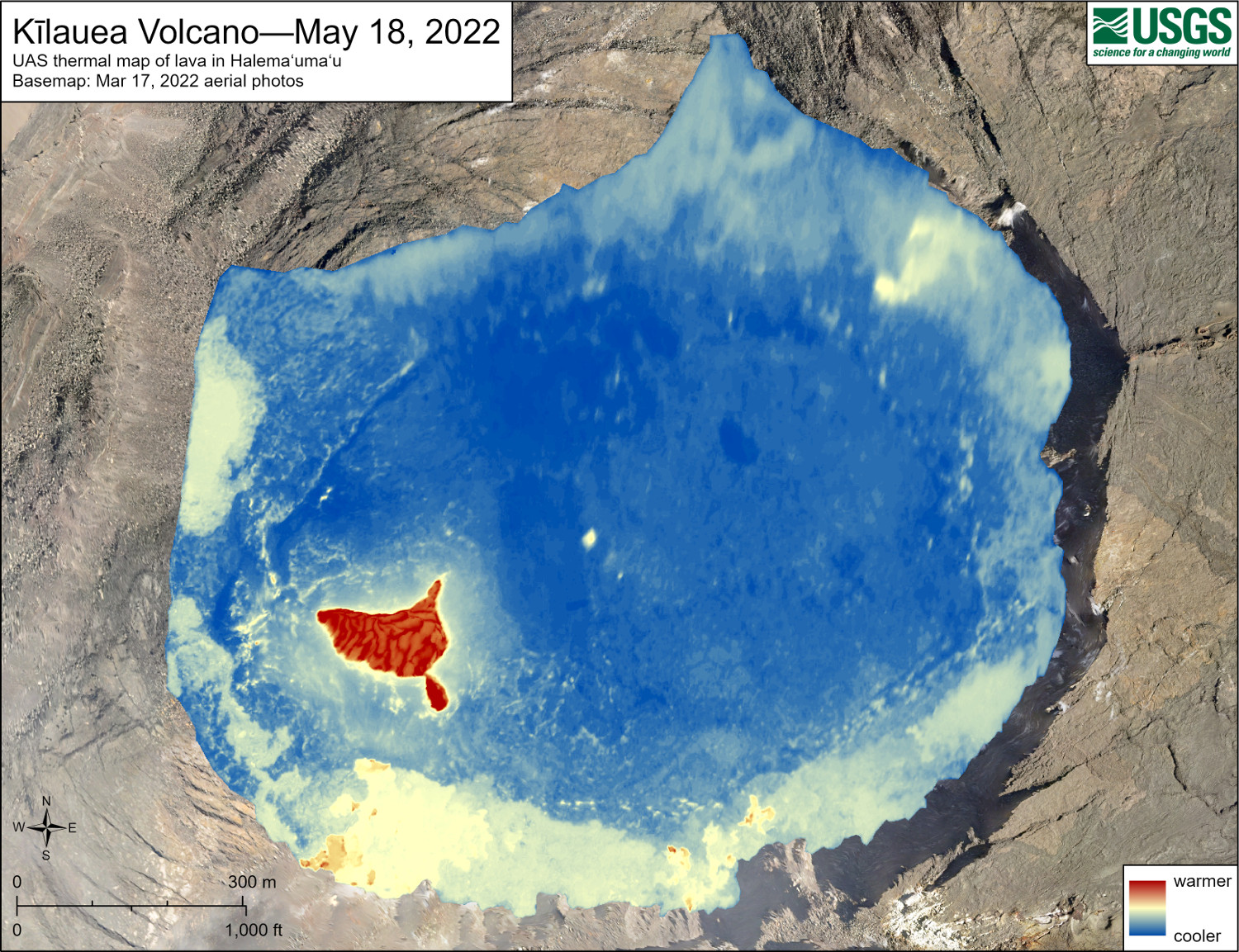 USGS: “Unoccupied aircraft systems (UAS) flights on May 18, 2022, allowed for aerial visual and thermal imagery to be collected of Halema‘uma‘u crater at the summit of Kīlauea. The active lake surface is limited to the western portion of the crater. The scale of the thermal map ranges from blue to red, with blue colors indicative of cooler temperatures and red colors indicative of warmer temperatures. USGS has special use permits from the National Park Service to conduct official UAS missions as part of HVO’s mission to monitor active volcanoes in Hawaii, assess their hazards, issue warnings, and advance scientific understanding to reduce impacts of volcanic eruptions.”