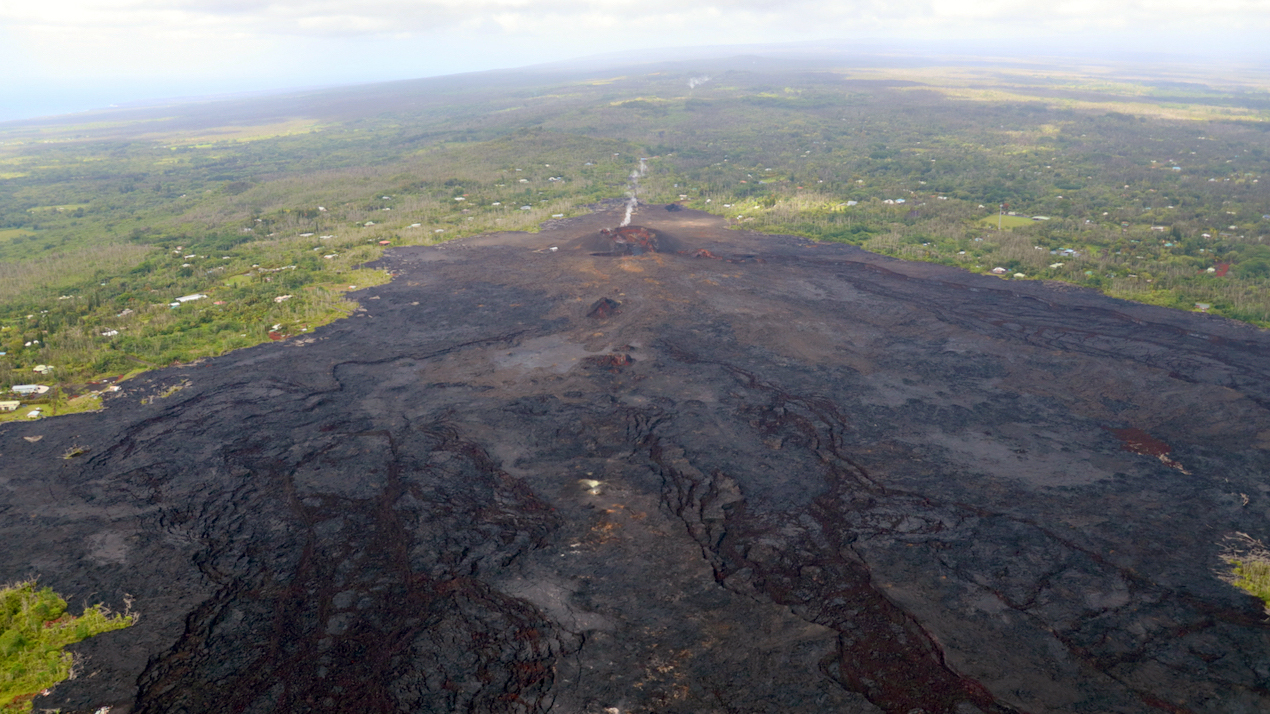 USGS: "Ahuʻailāʻau (the cone built during the eruption of Fissure 8) was the most active vent during the 2018 lower East Rift Zone eruption of Kīlauea on the Island of Hawai‘i. During a USGS Hawaiian Volcano Observatory routine monitoring overflight on May 12, 2022, the prominent feature was visible in the row of fissures." (USGS photo J. Schmith)

HAWAIʻI ISLAND - The target area for the survey is the entire volcano of Kīlauea, scientists say, from the eastern point of Kumukahi southwest almost to Punaluʻu.

USGS: “Photo of helicopter with loop suspended under it flying over Yellowstone National Park.”

In the last few months, “Volcano Watch” articles have introduced several research projects funded by the Additional Supplemental Disaster Relief Act of 2019 (H.R. 2157). Each of these projects will help scientists better understand how Kīlauea volcano works and how the 2018 lower East Rift Zone eruption and collapse of Kīlauea summit happened.

Two projects that will start this summer employ flying an oblong wire loop and burying wire coils. The target area is the entire volcano of Kīlauea – from the eastern point of Kumukahi southwest almost to Punaluʻu. Warning: many acronyms to follow! Both projects will determine the distribution of electrical resistivities below the surface that can be used to map magma and hot rock, among other things. The airborne project will also map variations in the magnetic field to determine how well the Earth’s field is frozen into Kīlauea’s magnetic minerals.

The first project will deploy electrodes and wire coils buried at shallow depths to passively measure the electromagnetic (EM) energy generated by lightning strikes around the equator. The technique is called magnetotelluric (MT) sounding. Lightning storms are common in equatorial regions and those storms produce surprisingly constant electromagnetic noise that travels around the globe in the atmosphere between the Earth’s surface and the ionosphere.

The response of the earth to this distant EM stimulation can tell us the electrical properties of the earth below the coils to depths of about 10 km (6 mi). The one-square-meter (yard) setup will be moved to about 125 ground locations on the volcano. The resulting data will be used to develop a detailed picture of Kīlauea’s inner workings. This study will be done over two field seasons with the first season in 2022 during the months of May and June. The second season will be in the summer of 2023.

The second part of this project will use a 15 by 25 m (50 by 80 ft) oval-shaped wire loop suspended 30 m (100 ft) beneath a helicopter (Fig. 1) flying over most of the volcano. The loop assembly will transmit and receive very, very low frequency EM energy and will need to be flown 35–50 m (115–165 ft) above the ground or treetops. A small sensor will also be measuring magnetic field strength. The technique is called airborne electromagnetic and magnetic (AEM) mapping. 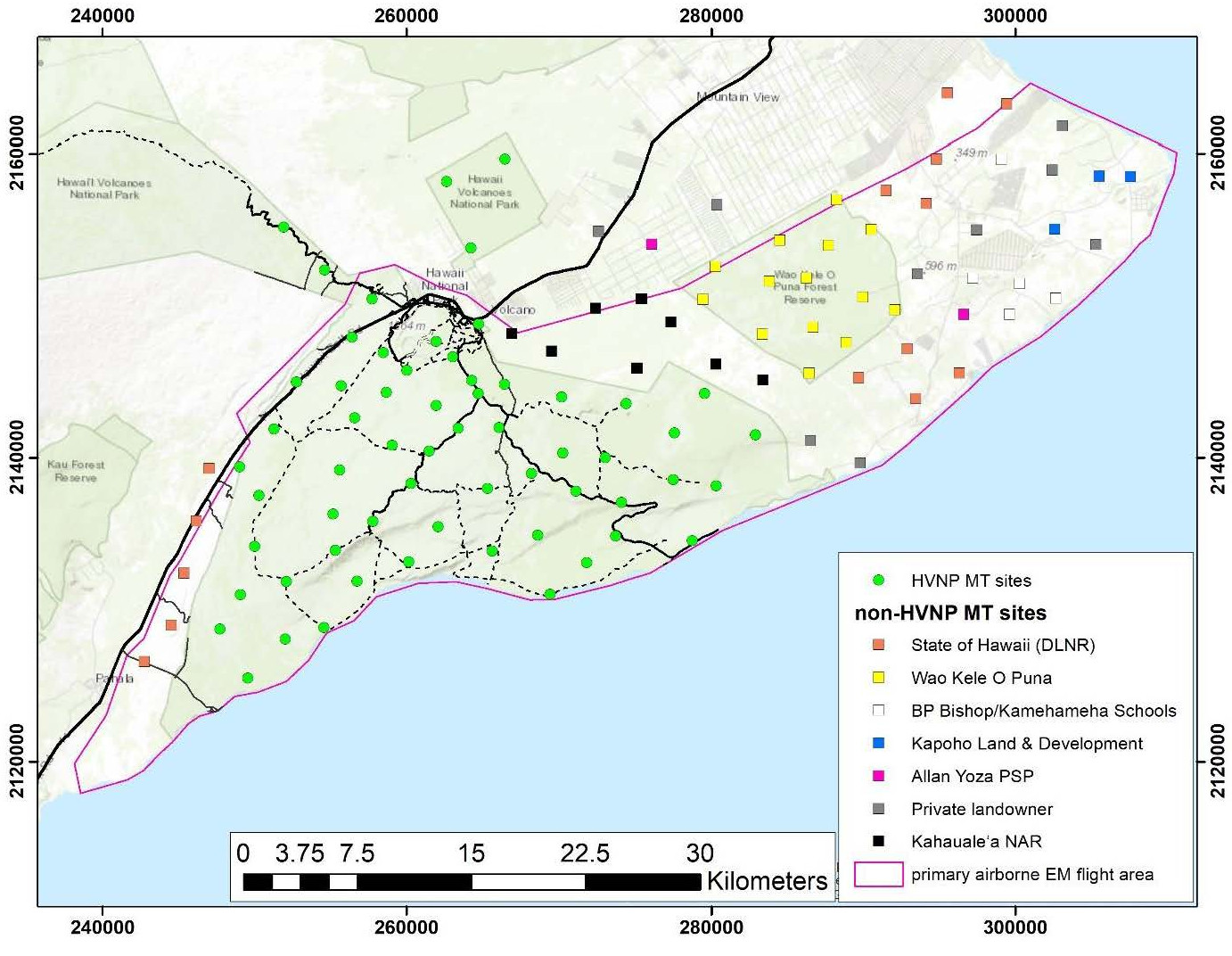 USGS: “Proposed MT station (squares) color-coded with some land ownership information. The area to be covered by the airborne survey is also outlined to cover most of Kīlauea volcano.”

AEM data will complement the MT data and allow imaging of the shallow (upper 600 m or 2,000 ft) structure of the volcano including groundwater and patterns of alteration caused by hydrothermal fluids like those that seeped into Halemaʻumaʻu water lake in 2019–2020. Earth’s magnetic field along the flight path will also map the signature of the cooling dike that transported magma to lower Puna in 2018. This part of the project is also scheduled for 2022 in the months of June and July.

Currently planned flight lines do not fly over any residential areas or other regions excluded by the Federal Aviation Administration (FAA) or Hawaiʻi Volcanoes National Park (HVNP). Flights will occur during daylight hours and be coordinated with the FAA. Experienced pilots specially trained and approved for low-level flying will operate the helicopter. None of the instruments in either part of the project pose a health risk to people or animals.

AEM and Earth’s magnetic field were last mapped in 1978 over both Kīlauea and Mauna Loa volcanoes. The 1978 results showed that Kīlauea’s East Rift Zone was clearly outlined by a strong magnetic field aberration typical of vertical dikes that fed countless eruptions laterally from the summit area.

The equipment and software have been much improved in the past 20 years and the geophysicists overseeing the current project have successfully used the technique to map other US volcanoes. Our hopes are high that we will be able to more clearly image to greater depths in this new project to produce a picture of the entire magmatic system of Kīlauea. The final products of this survey will be made public within a few years.

The AEM survey should take about three weeks starting in late June. We understand that helicopter noise can be disruptive, so we will greatly appreciate affected residents’ patience and understanding as we collect this extremely important data to help mitigate future eruption hazards.