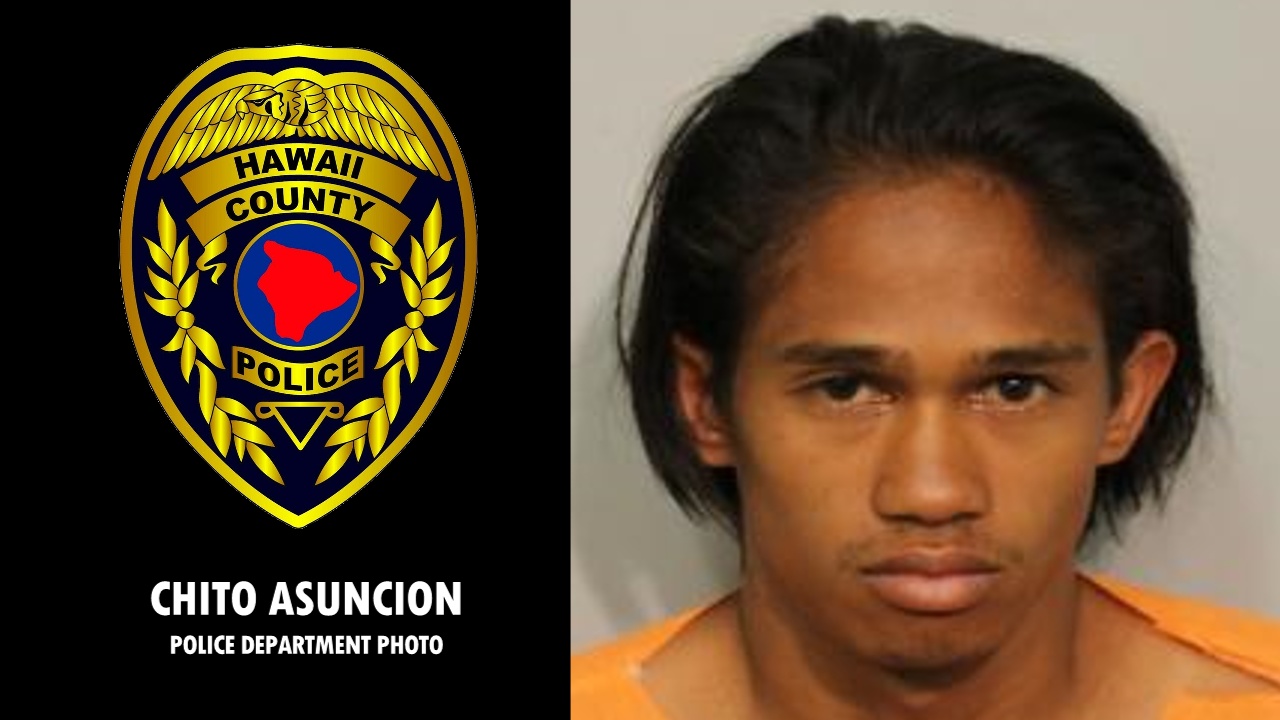 (BIVN) – A Kailua-Kona man has been arrested and charged for murder after the discovery of a lifeless body at Hale Halawai Park on Tuesday.

24-year-old Chito Asuncion is also a suspect in three other violent crimes, including a second alleged murder in Kona.

On Tuesday, June 7, 2022, shortly before 6:00 a.m., Kona patrol officers responded to Hale Halawai County Park after receiving a report of a lifeless body there. Detectives from the Area II Criminal Investigation Section responded to the scene and continued the investigation.

Following-up on leads, police identified 24-year-old Chito Asuncion of Kona as a suspect. Later that day, Asuncion was located near the Queen Ka‘ahumanu Highway and Henry Street intersection, where he was arrested for second-degree murder.

On Tuesday, the victim was transported to the Hilo Medical Center for official pronouncement of death and scheduling of an autopsy to determine the exact cause of death. Upon conclusion of the autopsy conducted on Wednesday, June 8, 2022, the manner of death was determined to be a homicide and cause of death was multiple stab wounds. Police identified the victim as 48-year-old Boyd Maygra of Kailua-Kona.

While conducting the investigation into this murder, detectives linked Asuncion to three other crimes, including another murder, and charged him in those cases as well.

The first incident, reported on Tuesday, May 17, 2022, involved the discovery of a body found near the intersection of Palani Road and Queen Ka‘ahumanu Highway in Kailua-Kona.

The victim, later identified as 63-year-old Brian Macaulay of Kailua-Kona, was transported to the Hilo Medical Center for official pronouncement of death and autopsy. The official report is still pending however, the preliminary autopsy determined that the manner of death was homicide and cause of death was stabbing.

A second incident, reported on Wednesday, May 25, 2022, in Hilo, involved the assault of a 59-year-old man from Hilo who reported being stabbed by an unknown male party. The victim was transported to the Hilo Medical Center where he was treated for his injuries and later released.

The third incident, reported on Monday, May 30, 2022, also in Hilo, involved the assault of a 70-year-old Hilo woman who also reported being stabbed by an unknown individual. She was transported to the Hilo Medical Center where she continues to receive treatment for her injuries.

Asuncion’s bail is set at $1,500,000. He remains in police custody pending his initial court appearance scheduled for Thursday, June 9, 2022 in Kona District Court.

Police ask anyone who may have information relative to these cases to call the police department’s non-emergency number at (808) 935-3311, or Detective Tyler Prokopec of the Area II Criminal Investigation Section at (808) 326-4646 ext. 224 or email Tyler.Prokopec@hawaiicounty.gov.